Accessibility links
Obamacare's National Enrollment Looks OK, But States Matter More : Shots - Health News Though the health insurance law is federal, we're not exactly all in this together. Each state runs its own insurance market and pools, so a big turnout of the healthy in New York won't help Texas. 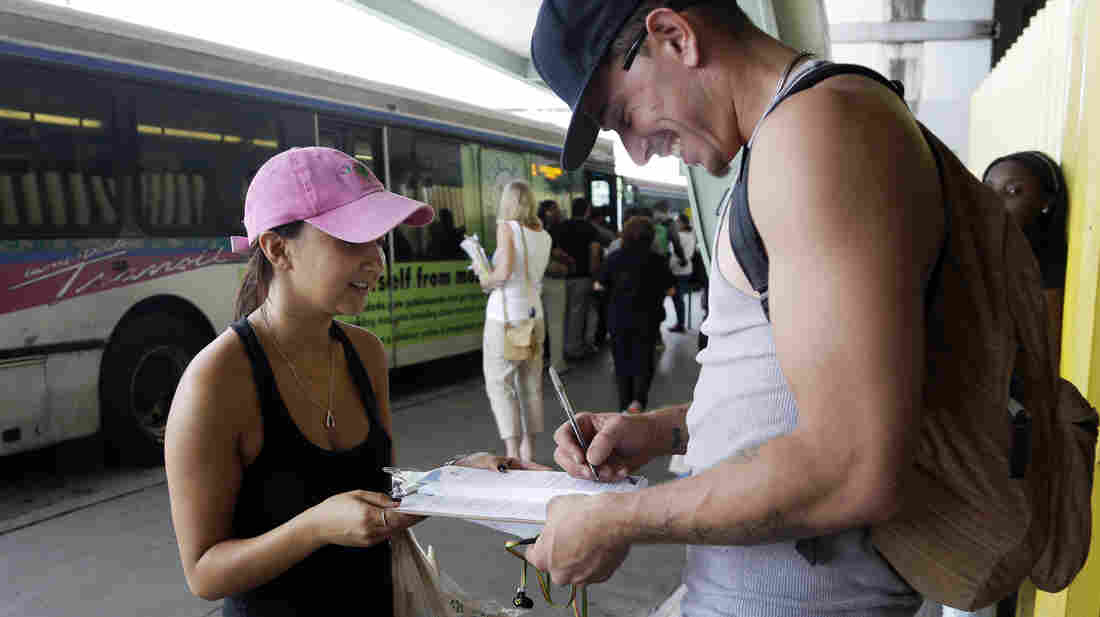 With this year's deadline to register for individual health insurance just a weekend away, much attention is being lavished on two numbers — the 6 million Americans who have signed up so far, and the percentage of those folks who are (or aren't) young.

"These are really state-based markets," says Caroline Pearson, vice president at Avalere Health, a consulting firm based in Washington, D.C. Because each insurance market is run within each individual state, big numbers in some states can't make up for shortfalls in others.

Still, much of the debate has centered around 6 million — the nationwide number the Congressional Budget Office estimated would sign up for insurance through the federal and state health exchanges. (That's indeed about how many have enrolled so far, the Obama administration confirmed Thursday.)

Insurers hope that at least 40 percent of those enrollees will be between the ages of 18 and 34. The theory is that those younger people will also be healthier, and offset the costs of people who are older and sicker.

" 'Six million' and the 'percent of young adults' are easy numbers for politics, and politics sometimes struggles with the more nuanced issues that really matter for the underlying policy," says Pearson, explaining at least some of the fixation on national numbers.

Meanwhile, Seth Chandler, who teaches insurance law at the University of Houston Law Center, says some states are doing quite well at signing people up, "such as California, New York, Connecticut, Vermont."

But at the same time, Chandler says, other states are lagging seriously behind, "including the big state of Texas, and states such as Louisiana, Arizona, Mississippi and Oklahoma.

"The fact that New York doesn't experience problems in its health insurance market, and insurers aren't being squeezed there," he says, "does nothing whatsoever to help insurers and people in Texas, Louisiana and elsewhere where — it looks like, at least — too few people are enrolling [to enable us] to have confidence in the success of the marketplace."

And it's not just an issue of the total number of people signing up in each state, or whether they're young or old. Karen Ignagni, who leads the insurance trade group America's Health Insurance Plans, says the real issue is the balance of healthy to sick individuals. She said in a C-Span interview last week that health plans are already seeing an influx of sicker people, thanks to new rules that bar health plans from discriminating against people who have pre-existing health conditions.

"We see a number of people who have gotten into the program, in January in particular, who are using a number of health care services," she said. "That's to be expected. No one in our industry thought it would be any different. We thought the people who needed services immediately would be the first to be motivated to sign up."

The big question, says Ignagni, is whether the last-minute enrollment surge that appears to be taking place now will be big enough, and full of the right kind of people.

"We thought the people who were healthier, who didn't feel like they needed services immediately, would be [signing up] at the end of the process," she said. "And we're hoping that hypothesis is going to be true."

But there's yet another factor the overall numbers don't take into account: the expectations of insurance companies when they set their premiums for this first year.

"Was the pricing any good to begin with?" asks Chandler, the Houston law professor. "Were they too conservative in their estimates of the population? Were they too liberal? There are all these factors that we do not know yet that are going to determine as much as the raw enrollment numbers how insurers react for 2015."

In other words, the bottom line on what happens to individual insurance markets in each state after this first open enrollment season is going to depend on a lot more than just one or two numbers.