Accessibility links
Why Is Guinea's Ebola Outbreak So Unusual? : Shots - Health News The virus does not typically spread as far afield as it has in Guinea — and that makes it much harder to stop. 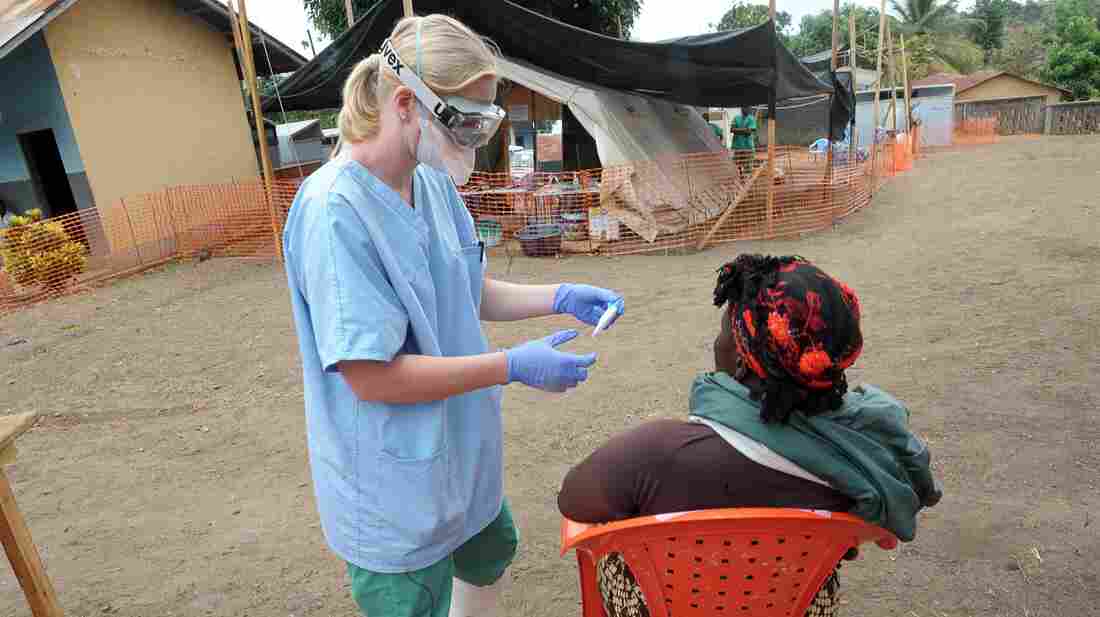 A nurse of the 'Doctors without Borders' medical aid organisation examines a patient in the in-take area at a center for victims of the Ebola virus in Guekedou, on April 1, 2014. The viral haemorrhagic fever epidemic raging in Guinea is caused by several viruses which have similar symptoms â the deadliest and most feared of which is Ebola. Seyllou/AFP/Getty Images hide caption 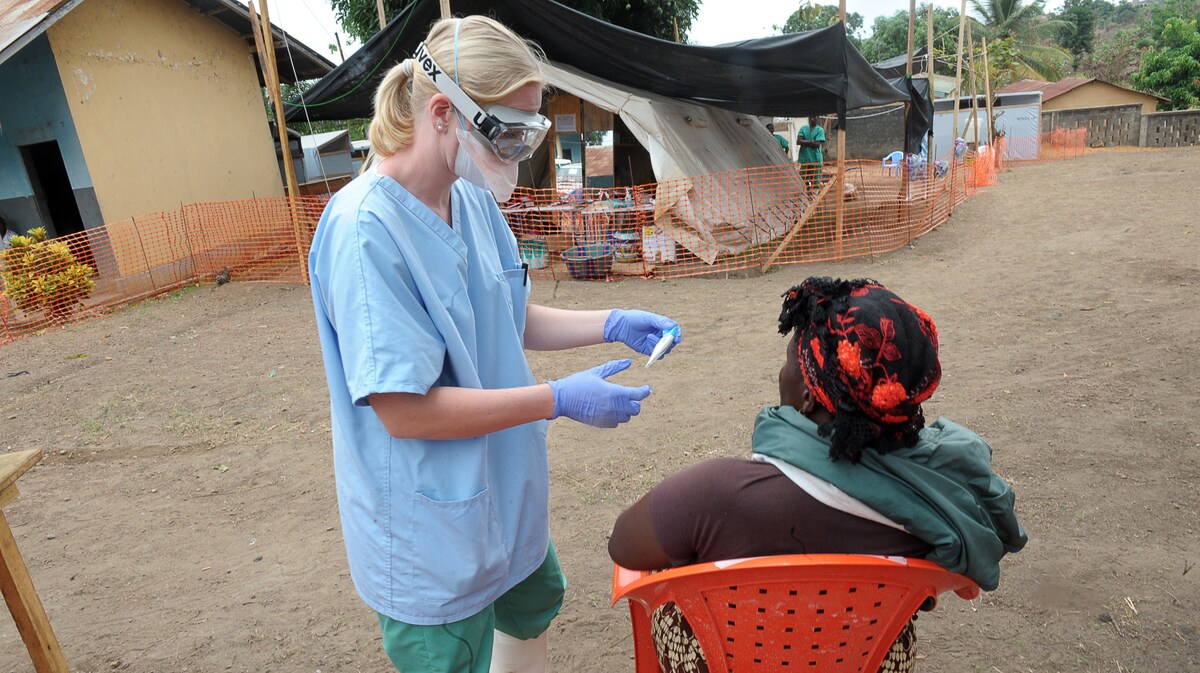 A nurse of the 'Doctors without Borders' medical aid organisation examines a patient in the in-take area at a center for victims of the Ebola virus in Guekedou, on April 1, 2014. The viral haemorrhagic fever epidemic raging in Guinea is caused by several viruses which have similar symptoms â the deadliest and most feared of which is Ebola.

Doctors Without Borders has called the current outbreak of the Ebola virus in Guinea "unprecedented" — not because of the number of victims (so far at least 78 have died) but because the disease has traveled to various parts of the country. The widespread infection (which includes the capital city of Conakry) is at least unusual, the World Health Organization agrees, and presents more challenges than usual to the medical team seeking to contain the virus.

To learn more, we spoke with Esther Sterk, a tropical medicine adviser for Doctors Without Borders. She's been on the ground during past Ebola outbreaks in Africa and, from her base in Geneva, is helping coordinate efforts to quash this one. Sterk believes the infection may have spread more than usual because it's easy for people to travel from place to place in Guinea, including from the southern part of the country (where the first cases were reported) to the capital. The conversation has been edited for length and clarity.

The recent Ebola outbreak started in southern Guinea, but has spread. Authorities have recorded 122 suspected cases so far and 78 deaths. Courtesy of the World Health Organization hide caption

The recent Ebola outbreak started in southern Guinea, but has spread. Authorities have recorded 122 suspected cases so far and 78 deaths.

How concerned are you about this outbreak?

We know from other outbreaks that epidemics can be stopped. And the principle is always the same: isolating suspected patients to prevent [them from giving] the disease to people around them. Also you follow the people who have been in close contact with patients with Ebola. So in the incubation period (which is 21 days), we follow them [tracking their contacts, and distributing information about prevention], because Ebola is [transmitted] by close contact with infected people. It's [spread via] body fluids, like the blood and the urine and the saliva, the stools — all body fluids are contagious.

What is also important is to inform the population about the disease. This is the first time Ebola is detected in Guinea, so the population and the medical staff don't know the disease. They need to be [told] how the disease is spread and how you can protect yourself, and what you need to do when you or somebody else has the symptoms (meaning that you have to go to an area where you can be isolated).

Any indication of how Ebola turned up in Guinea?

We have no clue. Researchers will definitely look into that.

How likely is it that it started with bats?

Between [human] outbreaks, the virus hides in certain animals. And it's thought that certain types of bats [are] possible reservoirs. In the areas where Ebola has occurred, the people eat bush meat — sometimes bats, monkeys ... that is a way the virus may be introduced into the population. So, the message in Guinea is: Don't eat bats; don't eat monkeys; don't touch sick or dead animals. People can infect themselves when they touch the fluids of an infected bat or a monkey [while] preparing the food, and also via [eating the] meat.

Is sexual activity another way that the virus spreads?

You can get infected by contact with all body fluids, so yes, also by sexual intercourse.

But people get [infected], and straightaway they get very sick. They start to [have] fever, and body pain; they start to vomit, they have diarrhea. So sexual intercourse is definitely not the main way of transmission.

After Ebola Fades, What Happens To The Quarantined?

I'd say more people get sick [via contact] with diarrhea and vomiting; for example, a man gets sick and his wife starts to clean up his diarrhea and his vomit, and she can get infected. So [it's] really caretakers of patients that get sick — or medical staff, if they are not respecting the precautions [for] an Ebola case.

Do you think there will be many more cases?

Ebola is not airborne, so not contagious like, for example, the flu. Now we know more or less which families are infected, so we are following them. The expectation is that if the people in the community are better informed about the disease, we can detect all possible cases of Ebola and [quarantine] them.

How long do you think it will take to contain this Ebola outbreak?

We will manage to contain this outbreak in a short amount of time, but it's difficult to say at the moment.