Accessibility links
Even A Very Weak Signal From The Brain Might Help Paraplegics : Shots - Health News By electrically stimulating the lower spine in men with paraplegia, researchers were able to get them to initiate movement. The big challenge is how to achieve coordinated motor control.

Even A Very Weak Signal From The Brain Might Help Paraplegics

Even A Very Weak Signal From The Brain Might Help Paraplegics 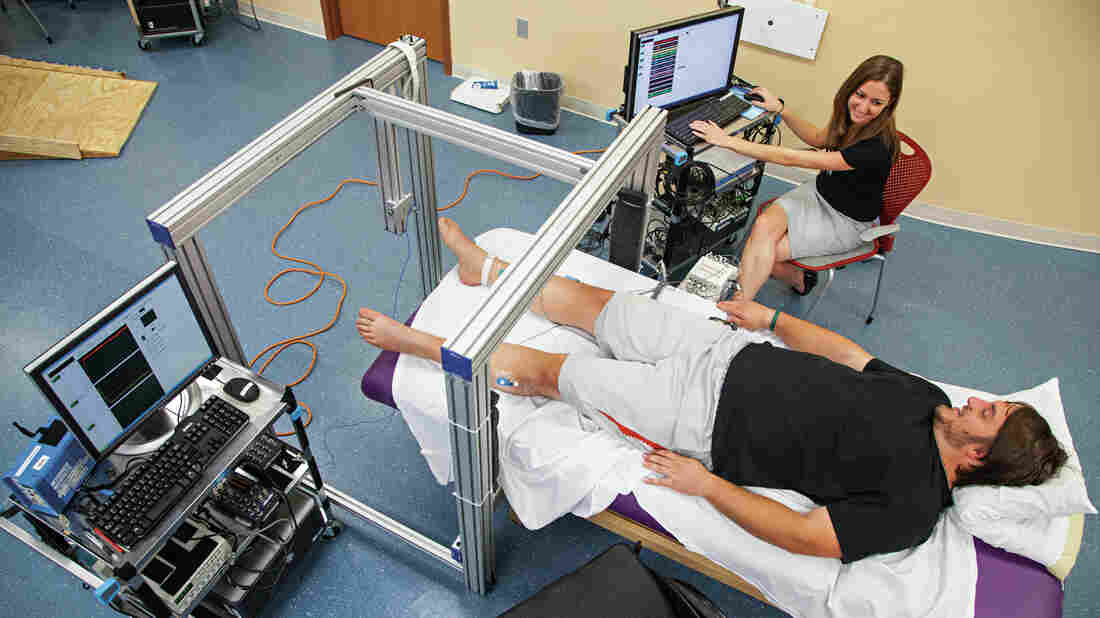 toggle caption
Courtesy of the University of Louisville 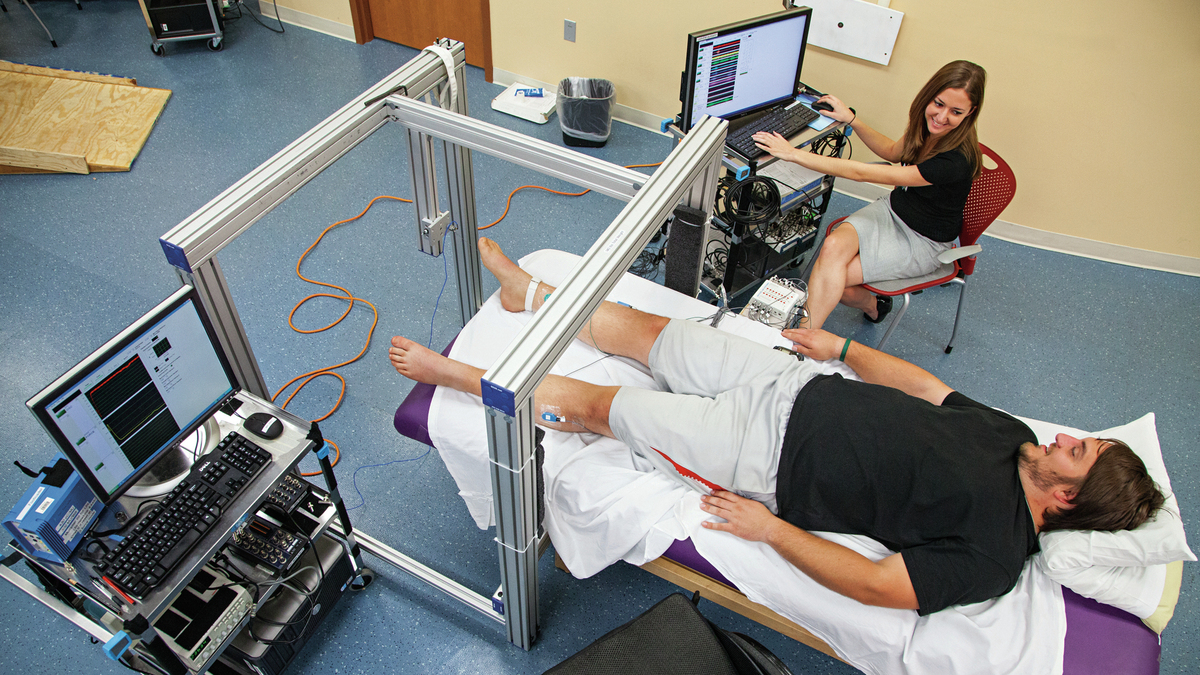 Kent Stephenson, a research participant at the University of Louisville's Kentucky Spinal Cord Injury Research Center, has his level of muscle activity and force measured by Katelyn Gurley.

Courtesy of the University of Louisville

A report that four young men who are paralyzed below the waist were able to move toes, ankles or knees when their lower spine was electrically stimulated was hailed as a breakthrough.

But it's hard not to be skeptical about anything labeled a medical breakthrough these days, and that's especially true when it comes to spinal cord regeneration, which has seen more than its share of hype. For the quarter of a million people with spinal cord injuries, dashed hopes can be devastating.

A treatment or cure for spinal cord injury remains elusive, but the study by researchers at the University of Louisville appears to add important information: Even a very weak signal from the brain can trigger movement.

To figure out what this means, we talked it over with John Donoghue, director of the Brown Institute for Brain Science and leader of the BrainGate II project, which in 2012 made it possible for two people immobilized by strokes to control a robotic arm with their thoughts. He wasn't involved in the Louisville research. The conversation has been edited for length and clarity.

When a spinal cord is severed, that causes paralysis. There have been decades of efforts to bridge that gap. Some reports say that's what's happened here, but others say no. What did happen?

It isn't like there was no connection there, it literally got severed, and then you got something. There has to be a connection to the brain.

The important thing, I think, is that it's not magic. It's sort of a hidden or masked connection. This suggests that when they put in the electrical stimulation, they revealed that there's a hidden connection that's hard to detect. And if it's there, it's really, really weak. You're doing something that reveals that the pathway is there.

In the past you and other researchers have been skeptical that having a few remaining neurons bridging that gap, or restoring a few, would be enough to restore function. Does this change your thinking?

This is wonderful news, I think. But these people are not playing basketball or anything. Is this functional movement? Well, in a sense, but to me, it's pushing us in a direction to say that for people with damaged spinal cords there's a way to get a small input to have a meaningful effect.

Obama's Plan To Explore The Brain: A 'Most Audacious' Project

Spinal cord circuitry is remarkably complicated. It's a machine that does a lot. My favorite analogy that I teach medical students, you're walking down the street and you stumble on a crack in the sidewalk. You catch yourself before you fall. Almost all of that action in your leg and foot is preprogrammed in the spinal cord. It's a beautifully coordinated machine.

So that's the control mechanism, and we might not need nearly as much command mechanism as we thought?

There are about a million fibers coming down from your brain. That's a lot. What Bizzi and others are saying is maybe you don't need that many fibers. Maybe a very weak command signal is enough to make something happen. I think these guys have done that.

Obviously there's a long way to go from the small movements shown here and being able to walk. How do you imagine that might happen?

The electrical simulation used here is a very crude stimulation. Here's the scenario. Because of the injury there's a bunch of inhibitory neurons that are making it impossible for signals to get through. You shut down the inhibitory neurons with the stimulation, but they're grossly shut down. Now imagine you could shut them down in some coordinated pattern.

What if they could give you coordinated leg action? And if you could get trunk and hip support, then the person could stand up and take a step. That's going to be really hard. Vivian Mushahwar in Canada has been working on that for a long time. So are Eb Fetz at the University of Washington, Simon Giszter at Drexel and Gregoire Courtine in Switzerland. He's got locomoting rats. I've seen them. It's pretty impressive.

If walking is going to be tough, what other functions could help people with paralysis?

I've talked to a number of young people who have paraplegic lower spinal cord injury. They lose bladder and bowel control, and that's not just a question of dignity — it can be life-threatening. It turns out that's a really complicated problem — at the same time you want to squeeze one muscle and relax another one. But if you do something simple like stimulate the nerve, both muscles contract. That's not what you want to have happen.

Even if one might consider [the Louisville research] not gigantic progress, this opens up a whole lot of thoughts of how we might go forward, especially for disabled people.

A research participant demonstrates how turning on a device that electrically stimulates the lower spine makes it possible for him to move his leg.