Accessibility links
How A Person Can Recover From Ebola : Shots - Health News The stricken are most likely to die within 10 days. But those whose bodies produce antibodies may survive — and be sent home with a clean bill of health. That's happening now in Guinea.

How A Person Can Recover From Ebola

How A Person Can Recover From Ebola 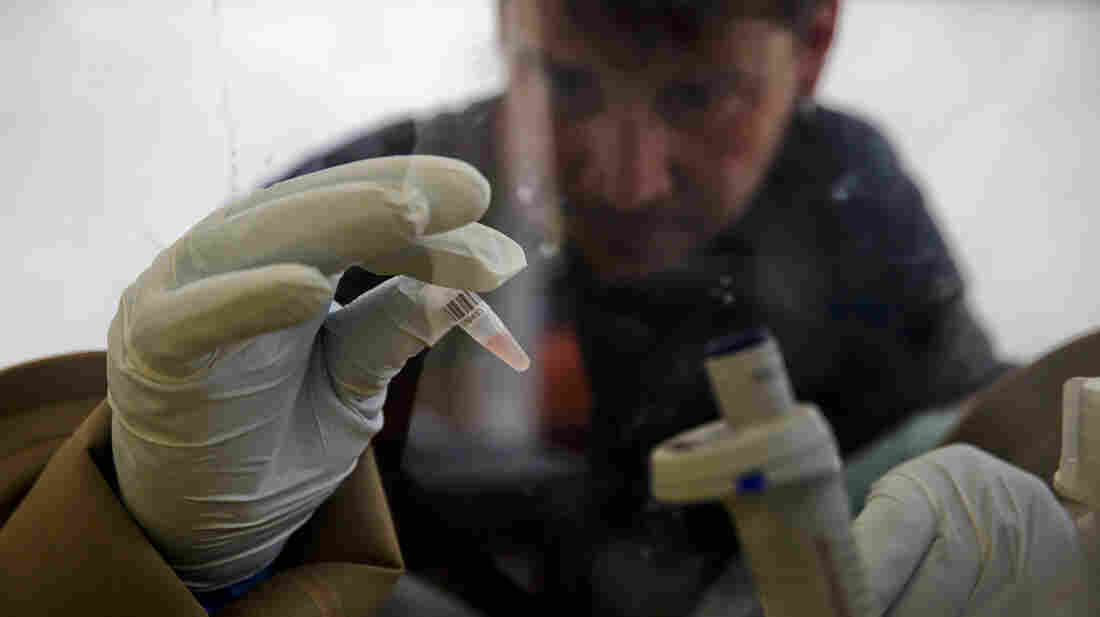 At least eight Ebola patients in Guinea have beaten the odds. They have recovered and been sent home. In past outbreaks, the death rate has been as high as 90 percent. In Guinea so far, about 60 percent of the 157 suspected cases have ended in death.

The first seven to 10 days after infection is the "peak of the illness," when people are most likely to die, says Barbara Knust, an epidemiologist at the Centers for Disease Control and Prevention in Atlanta. But if the body begins to produce antibodies to fight off the infection, then there's hope.

Doctors on the scene think the treatment regimen may play a role in boosting survival odds.

"It's hard to say conclusively that what we are able to give treatmentwise is causing that increased survival rate," says Tom Fletcher, an infectious diseases physician who is with the World Health Organization team in Guinea. "But we think interventions such as intravenous fluids, IV antibiotics and paying attention to symptom control and nutrition are probably all important." Such care has not always been available to patients during past Ebola episodes.

Adds critical care doctor Rob Fowler, also with WHO: "Outbreaks happen in places where it's very challenging to deliver medical care. Even when there's no specific therapy for the virus, with supportive care, people can have much better outcomes."

The first encouraging sign is when the symptoms fade — fever, vomiting, diarrhea, bleeding, fatigue and muscle aches. If a patient is symptom-free for several days, doctors run repeat blood tests to see if any virus remains in the bloodstream. "We're fortunate to have an Institut Pasteur lab here that gives us a result within four hours," Fletcher says.

But there are twists to this scenario, says Marie-Christine Férir, Brussels-based emergency coordinator for Doctors Without Borders. A man's blood may be free of Ebola, but the virus can persist in semen for two to three months after recovery. (That's because antibodies produced in the bloodstream don't reach the testicles.) Since Ebola can be transmitted through sexual contact, male survivors are sent home with condoms and instructed to use them for the next three months if they engage in intercourse.

The virus can also linger in breast milk, so mothers are told to wean any child who had been breast-feeding.

A clear blood test doesn't always mean a survivor is ready to be discharged. "The virus can really weaken a person, [and] they can lose a lot of weight," Knust says. "Sometimes they need extra support to get healthy enough so they aren't at risk of a secondary infection."

A Guinean physician, who was infected with Ebola but recovered, said he regained his strength by eating PlumpyNut — and got a psychological boost from the encouragement and guidance of his caregivers.

Ebola survivors do not have to worry about contracting the disease again, says Pierre Rollin, deputy director of the viral special pathogens branch of CDC, who has traveled to the site of previous Ebola epidemics over the past 20 years. "When they start to test negative, they're going to remain negative for the rest of their lives."

Mental health is another matter. Health care workers often check on patients in their homes to see how they are faring after the trauma of suffering through Ebola — and perhaps losing family members to the disease as well. They must also deal with the stigma associated with having had the virus.

Health workers teach the community that the Ebola survivor cannot infect them.

"They will do a lot of things, especially holding hands with [the patients], to publicly demonstrate that they're not afraid of these people," says Knust.

Adds Férir: "[In the past] we would bring the patient into the middle of the village, and we would give a big kiss to the patient to show that it's OK, no problem."