Accessibility links
Gene Linked To Alzheimer's Poses A Special Threat To Women : Shots - Health News Scientists have figured out one reason women might be more vulnerable to Alzheimer's: A risk gene doubles women's chances of getting the disease but has minimal effect on men. 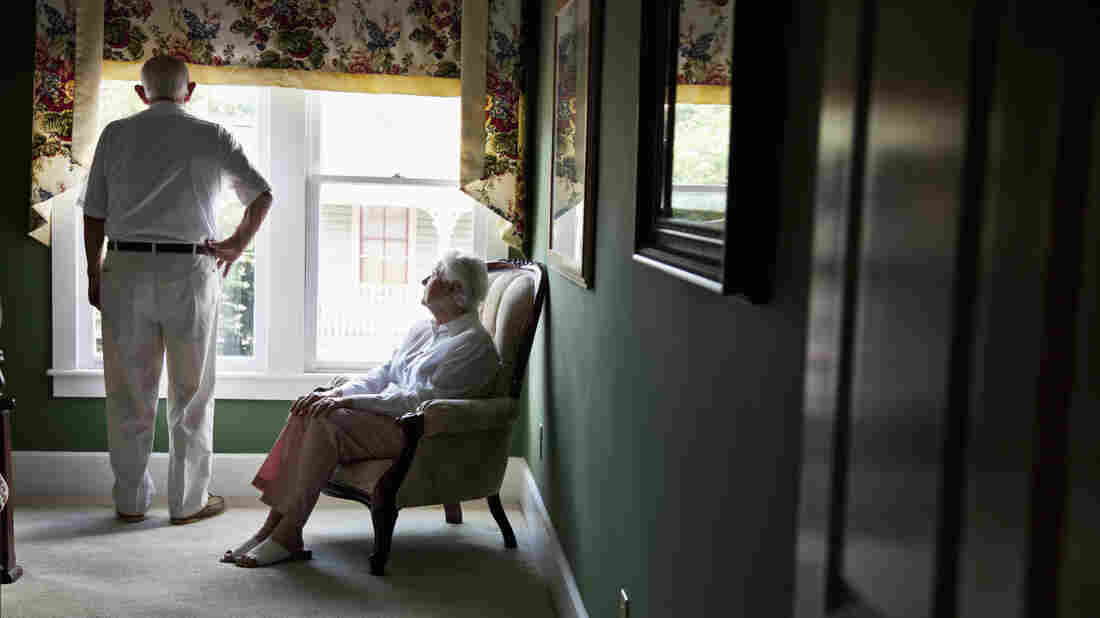 Women make up nearly two-thirds of the people in the U.S. diagnosed with Alzheimer's disease. iStockphoto hide caption

A gene associated with Alzheimer's disease appears especially dangerous to women and may be one reason that more women than men are diagnosed with the disease.

"We believe that there is an increased risk for Alzheimer's in women, and it may be that APOE4 is playing a sizable role in this," says Michael Greicius, one of the study's authors and head of the Stanford Center for Memory Disorders.

Women make up nearly two-thirds of the 5 million people in the U.S. diagnosed with Alzheimer's. One reason is that women are more likely than men to live long enough to develop the disease. But there have been hints that factors beyond longevity could be contributing to the disparity, Greicius says.

We say what's good for your heart is good for your brain. So exercise, controlling hypertension, cholesterol ... are all important for your cognitive function.

Studies dating to the 1990s have suggested that one of these factors could be the APOE4 gene. About 15 percent of the general population carries the gene, but about 50 percent of people diagnosed with Alzheimer's have it. The gene variant is just one risk factor for Alzheimer's, but scientists say it seems to be an important one.

Greicius and his colleagues reviewed medical records of more than 8,000 older people. Some had the APOE4 gene, some didn't. The records — many of them part of a data set funded by the National Institute on Aging — showed which people developed Alzheimer's disease over a three- or four-year period.

And when it came to the subset of people who carry the APOE4 gene, Greicius says, there was a clear pattern. Men with the gene were only slightly more likely to develop Alzheimer's, while women with the gene faced 1.8 times the risk compared with other women.

The finding is important for researchers of Alzheimer's, who will need to figure out why the gene affects women more than men, Greicius says. But until there's a way to slow or stop the disease, he says, there's still no compelling reason for most people to find out whether they carry the gene.

The current study does not settle the question of whether women as a group are more likely to develop Alzheimer's than men who are the same age, says Michelle Mielke, a psychiatric epidemiologist at the Mayo Clinic. But it does add to the evidence that risk factors for Alzheimer's can be different for men and women, something "we haven't really looked at very closely," she says.

For example, researchers are only beginning to understand the role of the hormone estrogen in Alzheimer's, Mielke says. Some studies have suggested that when a woman's estrogen levels decline after menopause, her brain becomes more vulnerable to Alzheimer's.

"What is interesting in relation to this paper is that animal and cellular studies suggest that there is an interaction between APOE4 and estrogen," Mielke says. "So that may possibly be explaining the findings we're seeing here in humans."

Someday, understanding how Alzheimer's is different in men and women could lead to different drugs or preventive treatments, Mielke says. But at the moment, she says, the advice remains the same for men and for women concerned about the disease.

"We say what's good for your heart is good for your brain," she says. "So exercise, controlling hypertension, cholesterol, eating right, doing physical activities are all important for your cognitive function."