Accessibility links
The 7.5 Million Insured Through Obamacare Are Only Part Of The Story : Shots - Health News Millions signed up for health insurance through state exchanges and HealthCare.gov. But another several million bypassed the exchanges and bought health coverage directly from insurers. 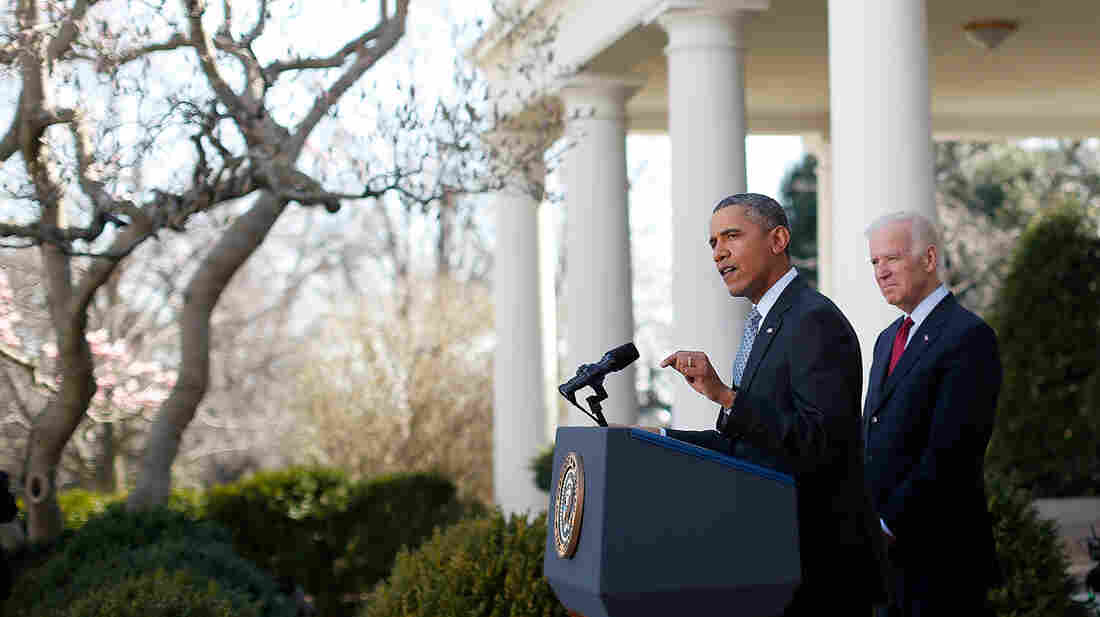 President Obama announced in early April that more than 7 million people had signed up for health insurance through the exchanges. Win McNamee/Getty Images hide caption

Want to know how many people have signed up for private insurance under Obamacare? Like the health care law itself, the answer is complicated.

The Obama administration is tracking the number of plans purchased on HealthCare.gov and on the state exchanges, and this month reported that it had exceeded expectations by signing up 7.5 million people. In addition, federal officials have said that 3 million people have enrolled in Medicaid this year.

But what's often overlooked is that enrollment in private health plans outside the marketplaces is also booming.

Lessons Learned For 2015 From This Year's Obamacare Sign-Ups

The federal government hasn't been counting the number of people who buy new plans directly from insurance carriers — and that number could be substantial. When Alaskan insurance broker Joshua Weinstein wanted to sign someone up for health insurance this year, he asked one key question — would they qualify for a federal subsidy?

If they did, it was worth signing them up through HealthCare.gov to make sure they got that substantial reduction in their monthly premium. But if they made too much money to qualify for subsidy, he says, he steered them away from HealthCare.gov.

"If you can avoid that whole level of bureaucracy and get a good plan — not necessarily at a good price, but at the same price — and they're not eligible [for a subsidy], we're going off the marketplace," Weinstein says.

One of those clients is Oliver Korshin of Anchorage. Weinstein and Korshin worked together to enroll Korshin's wife, Rachel, in a new health plan. She didn't qualify for a subsidy, so they went directly to the insurance firm Premera Alaska.

"The actual enrolling wasn't difficult at all," Korshin says.

Weinstein estimates that about 15 percent of his clients are signing up for insurance outside the exchanges. He says enrolling directly with insurers is easier because they don't need the financial information that's required on HealthCare.gov.

With private insurance companies, signing up means "basically gathering demographic information — name, address, phone number, Social Security number," Weinstein says. Once the client decides which plan they want, and how they want to pay the monthly bill, they just sign the application, he says, "and off you go."

Alaska's two main insurers say more than 20 percent of their customers in the recent open enrollment period bought plans from them directly. But these customers aren't being tallied by the Obama administration.

Larry Levitt, an insurance expert with the Kaiser Family Foundation, says there's a lot of focus on the 7.5 million people who signed up through the 14 state exchanges or HealthCare.gov. But the off-exchange number is just as essential to gauging how well the law is working, he says. "I think it's probably the case that there are more people insured in the individual market off the exchange than on the exchange right now."

In fact, a new survey from RAND Corp. estimates that 7.8 million people nationwide bought health insurance between September and mid-March directly from a carrier.

This story is part of a partnership with NPR, Alaska Public Radio Network and Kaiser Health News.