Accessibility links
Medicare Kept Paying Indicted, Sanctioned Doctors : Shots - Health News Among doctors who received payments from Medicare in 2012 are dozens who had been kicked out of Medicaid, or charged with fraud, or settled fraud cases out of court, a ProPublica investigation finds. 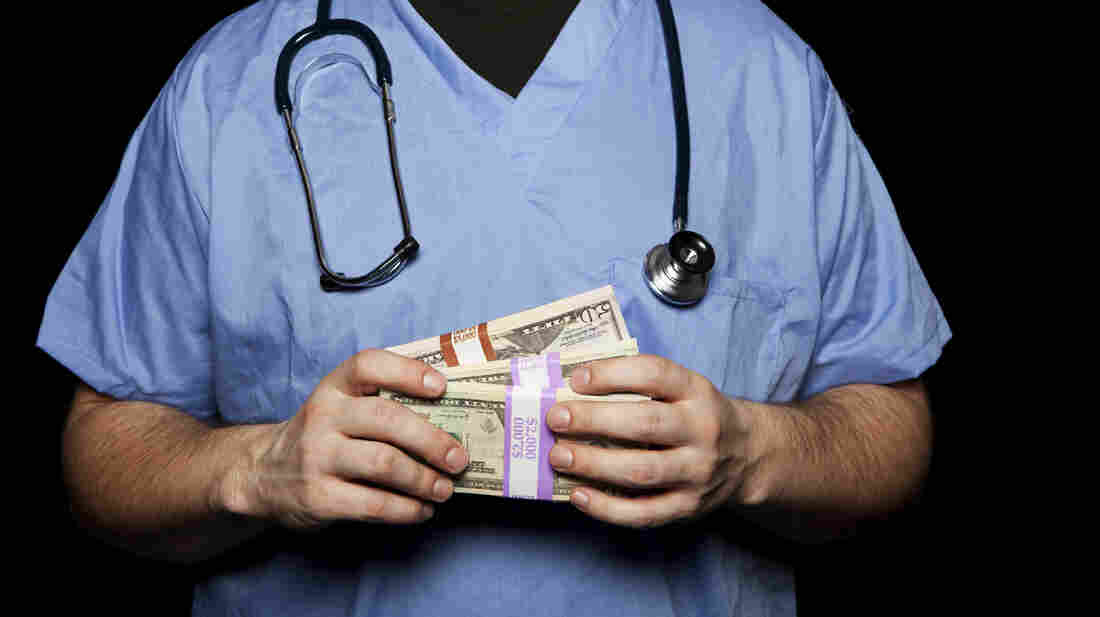 A check of Medicare's new database of payments to physicians confirms that at least $6 million in 2012 went to doctors who had been indicted or otherwise sanctioned. iStockphoto hide caption

In August 2011, federal agents swept across the Detroit area, arresting doctors, pharmacists and other health professionals accused of running a massive scheme to defraud Medicare.

The following month, several of those arrested, including psychiatrist Mark Greenbain and podiatrist Anmy Tran, were suspended from billing the state's Medicaid program for the poor.

But the indictment and Medicaid suspensions didn't deter Medicare from continuing to allow the doctors to treat elderly and disabled patients — and didn't stop the physicians from billing taxpayers for their services.

Medicare Pulls Back The Curtain On How Much It Pays Doctors

Greenbain and Tran were among dozens of doctors identified by the nonprofit newsroom ProPublica who kept getting Medicare payments after they were suspended or terminated from state Medicaid programs, indicted or charged with fraud, or had settled civil allegations of submitting false claims to Medicare.

Outlays to these doctors amounted to more than $6 million in 2012, ProPublica's analysis shows. That's only a small fraction of the $77 billion Medicare has publicly reported paying that year for doctors' visits and outpatient services in its Part B program. But it signifies a hole in regulators' ability to protect the program — and patients-- against fraud and abuse, say current and former government officials and fraud experts.

The total dollars paid to sanctioned doctors is likely much higher. Only a handful of states post online the names of doctors terminated from Medicaid programs in a way that can be accurately matched to Medicare Part B payments.

"If you've been suspended or terminated in one of the federal programs ... I would think that you'd be suspended in the other programs, just as a basis of good practice," said Louis Saccoccio, chief executive of the National Health Care Anti-Fraud Association.

Part B payments to doctors were released last week for the first time. A court injunction that had kept the information secret for 35 years was lifted last year as a result of a lawsuit by Dow Jones & Co., parent company of The Wall Street Journal.

Aaron Albright, a spokesman for the Centers for Medicare and Medicaid Services, said he could not discuss the status of individual doctors such as Greenbain and Tran, both of whom were finally barred from billing Medicare this month.

By that time, Greenbain had pleaded guilty and been sentenced to four years in prison. Tran had been found guilty at trial and was sentenced to five years. She is appealing her conviction.

Albright said the Medicare payment data may not reflect money already recovered by his agency or held back from providers suspended from billing the program.

Preventing improper payments is a top priority for CMS, Albright said. The agency has employed new enrollment screening techniques to prevent high-risk providers from getting into the system, he said, and is using advanced data analytics to spot fraudulent billing before payments are made.

Last year, ProPublica reported that doctors who had been booted from Medicaid — or who had been disciplined by state medical boards — were able to continue prescribing medications to beneficiaries in Medicare's drug program. The finding prompted Sen. Charles Grassley, R-Iowa, to push for better coordination.

Among the physicians ProPublica found who continued to collect Medicare Part B payments after being flagged by law enforcement or other oversight agencies:

Even a guilty plea sometimes wasn't enough for Medicare to cut off payments. Dr. Anthony Jase of New Orleans pleaded guilty to two counts of health care fraud in October 2011. He still collected $97,460 for Medicare billings in 2012. Last fall, he was sentenced to 15 months in prison and ordered to pay $360,293 in restitution.

"It certainly looks like there is a need for more attention," said Mark McClellan, former administrator at CMS who is now at the Brookings Institution.