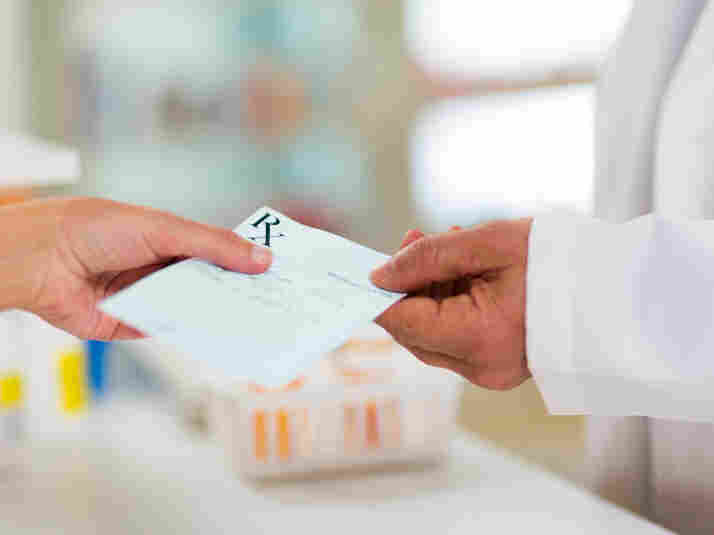 What you're prescribed may depend on what samples your doctor gets from drug companies. Steve Cole/iStockphoto hide caption

Every "free" sample comes with a price.

Dermatologists who accept free tubes and bottles of brand-name drugs are likelier to prescribe expensive medications for acne than doctors who are prohibited from taking samples, a study reports Wednesday.

The difference isn't chump change. When patients see a dermatologist who gets and gives free samples, the average cost of medicines prescribed is $465 per office visit. That cost drops to about $200 when patients see a doctor who can't hand out freebies, a team at Stanford University found.

The findings, published in the current issue of JAMA Dermatology, adds to the growing evidence that free handouts may influence doctors' prescribing habits — and the type of medications people request.

"When a doctor gives a sample to a patient, it's a very strong endorsement of a drug," says Georgetown University's Dr. Adriane Fugh-Berman, who wasn't involved in the study.

"Patients think the physician has chosen this sample because it's the best drug for them," she says. "They don't realize that the doctor might have chosen it because a drug rep gave him samples and it was what he had around the office."

Once doctors have given a free trial pack, it's hard for them to prescribe a different generic drug, Fugh-Berman adds. "That would look really inconsistent."

So some physicians — in all specialties — end up prescribing an expensive branded drug when a cheaper alternate is available, she says.

That connection between freebies and costlier drugs is exactly what Stanford University's Alfred Lane and his colleagues found among dermatologists.

The team analyzed the prescribing habits of 3,500 dermatologists in private practices across the country. They then compared that data with prescribing patterns at Stanford's clinics, where doctors aren't allowed to take samples from drug companies.

The difference was stark. Doctors in private practices, where samples are common, recommended brand-name medications nearly 80 percent of the time. At the academic clinic, only 17 percent of drugs were name brands.

Dermatology may be especially effected, he says, because handing out samples is common in the specialty.

Not long ago, Lane was actually a fan of such samples. Then in 2004 Stanford University and many academic clinics started prohibiting doctors from accepting them. "We fought the change," he says. "We thought it would have a negative impact on our practice."

But the result was the opposite. "Now I'm absolutely delighted that we're not using samples," Lane says."When I look at the cost difference [to patients], I'm glad I'm not writing more expensive medications."

The quality of care at his clinic has changed in a good way, he thinks. But he worries that some people think better of doctors who offer samples.

One recent study found that more than a third of doctors surveyed say they sometimes prescribe a brand-name drug because a patient requests it, even when there's a generic available.

Of course, all samples aren't bad. They can be a big help for patients who lack insurance or are on tight budgets. And some of the name-brand drugs come in a time-released formulation, which may be more convenient for some people.

But often, it's up to the patient to ensure their drug bill isn't getting an extra, unwanted bump.

"Patients need to be aware that by receiving samples or branded drugs, they may be paying more for something that isn't documented to be any better than a generic," Lane says.