Accessibility links
Dirty Money: A Microbial Jungle Thrives In Your Wallet : Shots - Health News A look at the critters that live on money finds about 3,000 types of bacteria. Most are harmless. But researchers found traces of DNA from anthrax and drug-resistant pathogens, too.

Dirty Money: A Microbial Jungle Thrives In Your Wallet

Dirty Money: A Microbial Jungle Thrives In Your Wallet 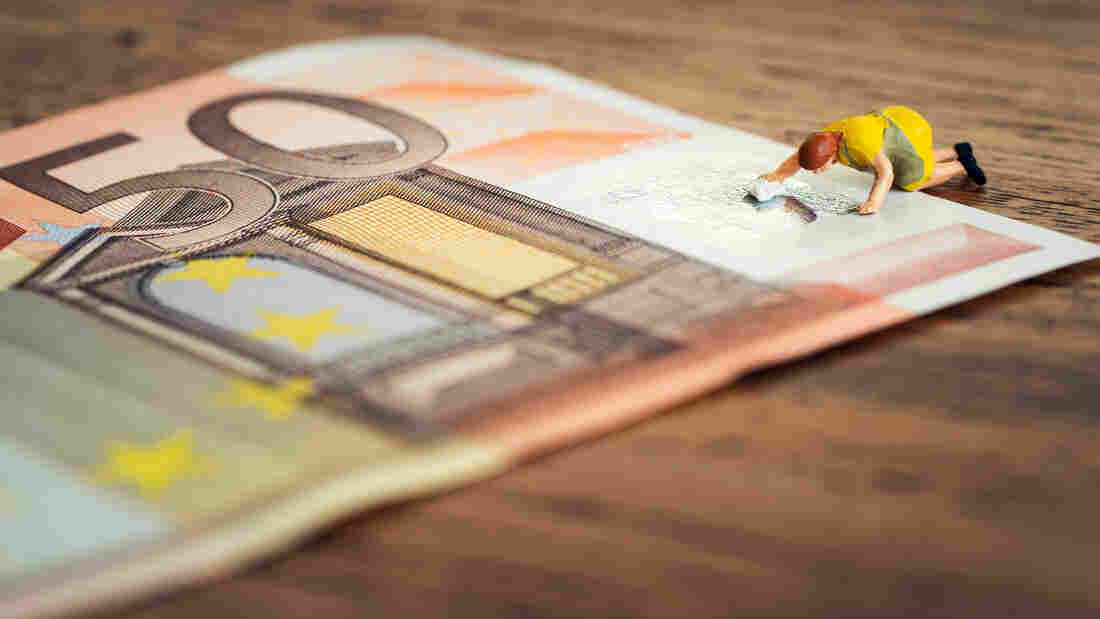 Even some euro bank notes may need a good scrubbing. Like dollar bills, these notes are made from cotton and they harbor an array of bacteria. Thomas Leuthard/The Preiser Project/Flickr hide caption 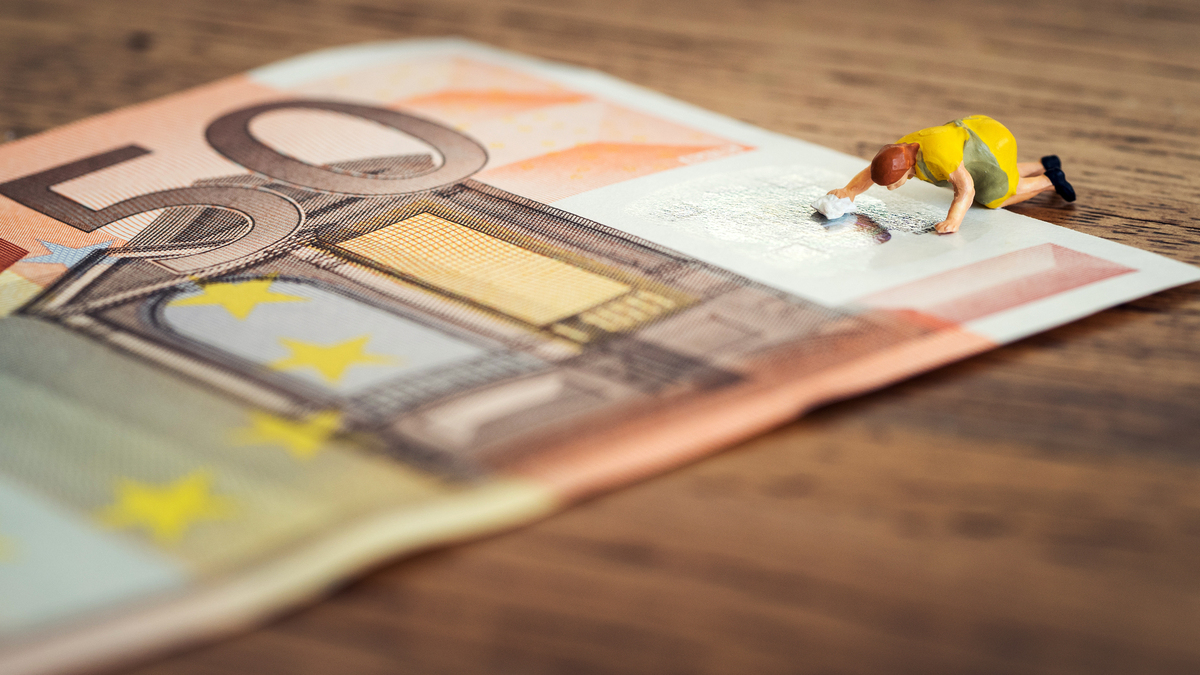 Even some euro bank notes may need a good scrubbing. Like dollar bills, these notes are made from cotton and they harbor an array of bacteria.

You may have heard that dollar bills harbor trace amounts of drugs.

But those greenbacks in your wallet are hiding far more than cocaine and the flu. They're teeming with life.

Each dollar bill carries about 3,000 types of bacteria on its surface, scientists have found. Most are harmless. But cash also has DNA from drug-resistant microbes. And your wad of dough may even have a smudge of anthrax and diphtheria.

In other words, your wallet is a portable petri dish. 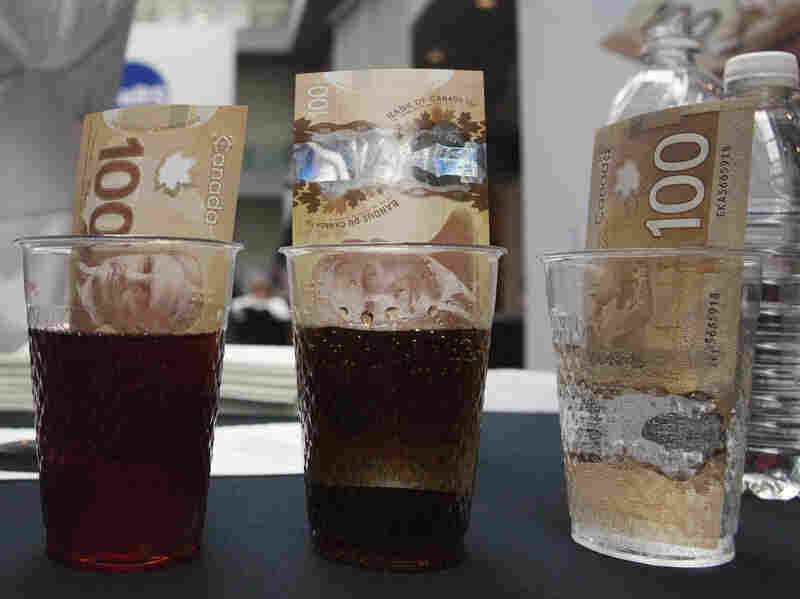 Made from plastic, Canadian $100 bills are resistant to liquids and tearing. But are they better than cotton-based bills at keeping dangerous bacteria at bay? Mark Blinch/Reuters /Landov hide caption 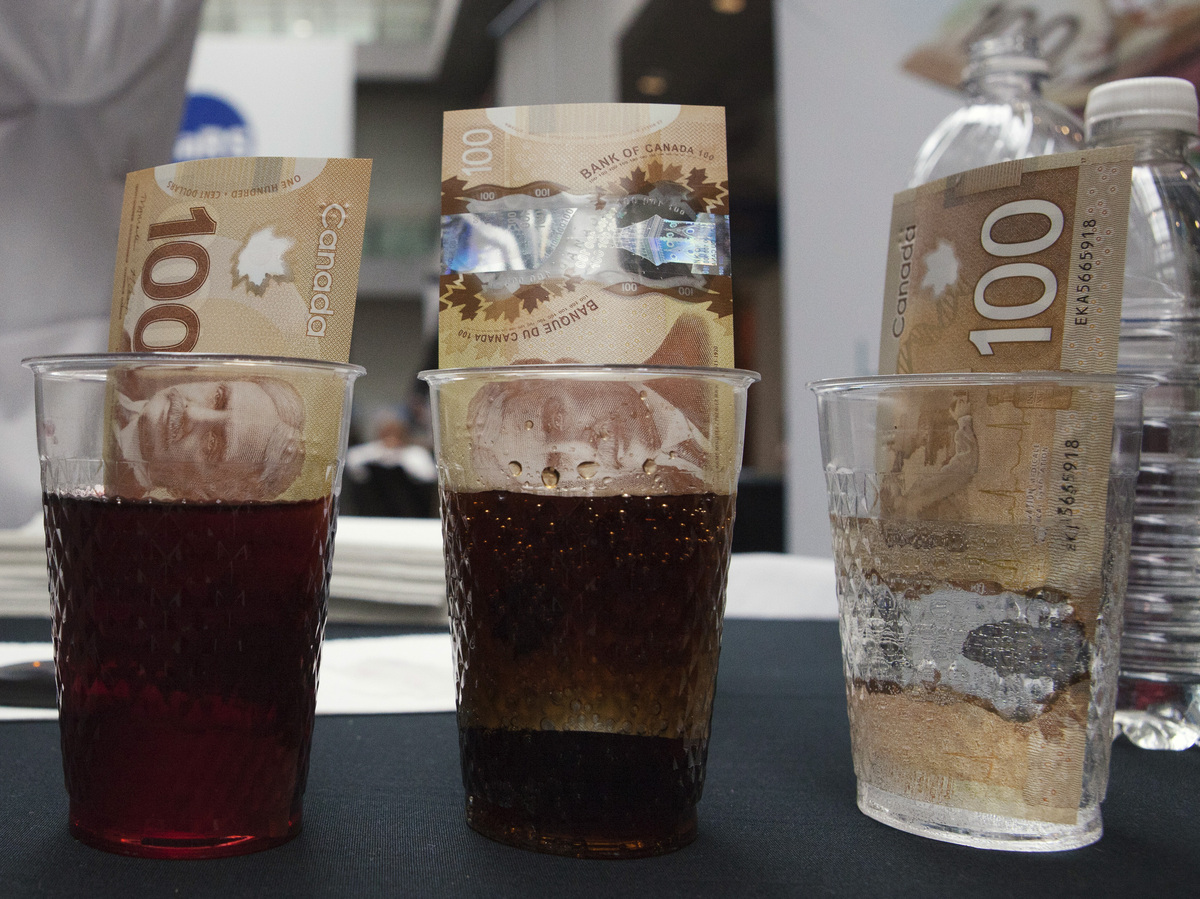 Made from plastic, Canadian $100 bills are resistant to liquids and tearing. But are they better than cotton-based bills at keeping dangerous bacteria at bay?

And currency may be one way antibiotic-resistant genes move around cities, says biologist Jane Carlton, who's leading the Dirty Money Project at the New York University.

The project offers an in-depth look at the living organisms shacking up on our cash. One goal of the work is to provide information that could help health workers catch disease outbreaks in New York City before they spread very far.

"We're not trying to be fear mongers, or suggest that everyone goes out and microwave their money," Carlton tells Shots. "But I must admit that some of the $1 bills in New York City are really nasty."

So far, Carlton and her colleagues have sequenced all the DNA found on about 80 dollar bills from a Manhattan bank. Their findings aren't published yet. But she gave Shots a sneak peak of what they've found so far.

The most common microbes on the bills, by far, are ones that cause acne. The runners-up were a bunch of skin bacteria that aren't pathogenic: They simply like to hang out on people's bodies. Some of these critters may even protect the skin from harmful microbes, Carlton says.

Other money dwellers included mouth microbes — because people lick their fingers when they count bills, Carlton says — and bacteria that thrive in the vagina. "People probably aren't washing their hands after the bathroom," she says.

What about the potential traces of anthrax DNA? Not a cause for alarm, Carlton says.

"Anthrax is a very common bacteria in soil," Carlton says. "People who work with soil, like farmers, are often exposed to it. It's only when anthrax is weaponized and sent through the mail that it causes those issues."

And some of the DNA that looks like anthrax's could have come from a harmless relative, she notes.

"Now we know that viable bacteria are on money and could serve as a mode of transmission for antibiotic-resistant genes," Carlton says. "Money is a frequent route of contact between people in New York City."

At this point, though, scientists don't how important money is for transmitting pathogens and fueling disease outbreaks.

Would changing the material for dollar bills are made from help to keep them cleaner? The jury is still out.

Some countries, such as Canada, have started printing money on flexible sheets of polymer film, a fancy plastic. One study found less bacteria, in general, grew on these plastic bills than cotton-based ones, like the dollar and euro notes. But another study reported that microbes survive longer on polymer-based bills, The Wall Street Journal reported last week.

Until the ideal material gets figured out, the best protection against money's invisible inhabitants is also the simplest one: Wash your hands after handling cash.