Accessibility links
Why The U.S. Is Worried About A Deadly Middle Eastern Virus : Shots - Health News Middle East Respiratory Syndrome has a fatality rate of about 30 percent. An uptick in new cases in Saudi Arabia has health specialists concerned that the virus could spread outside the region. 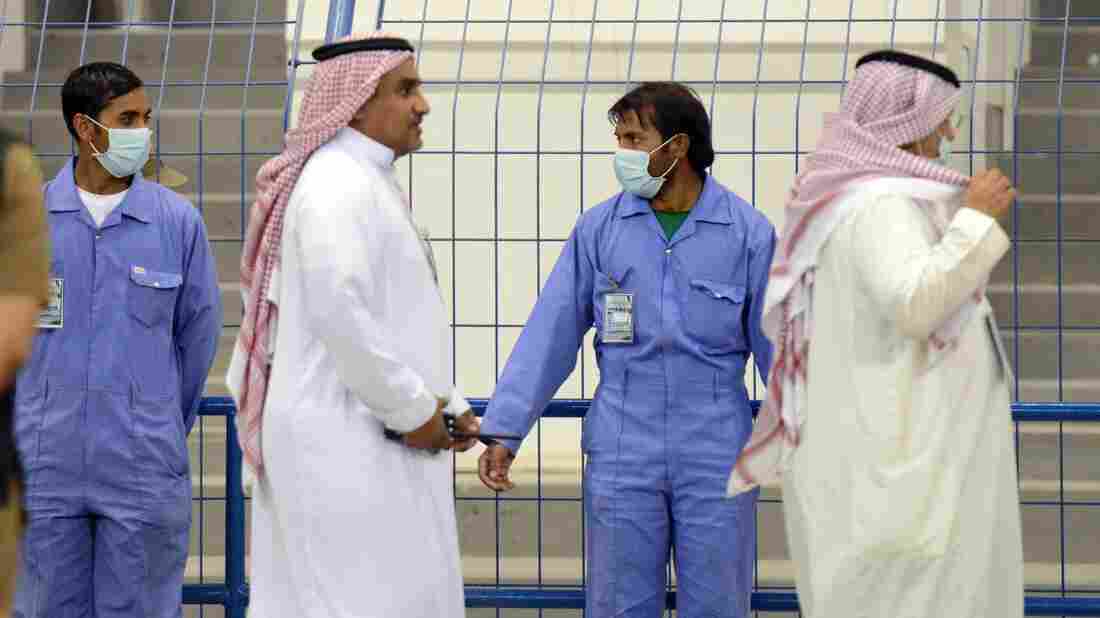 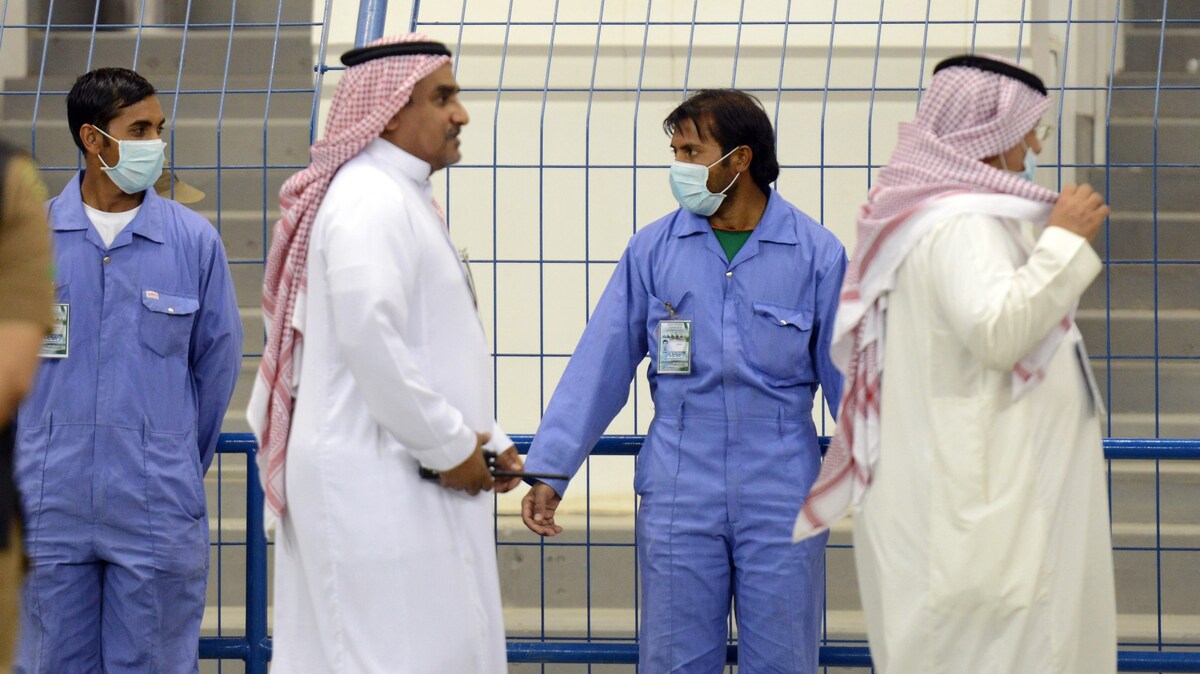 Fearful of catching the MERS virus, workers wear masks during a soccer match on April 22 at King Fahad stadium in Riyadh.

UPDATE at 4:17 p.m. Friday: Saudi Arabia has confirmed 313 cases of the Middle East Respiratory Syndrome, including 92 deaths, the Ministry of Health said Friday. Of note, one of the 14 new patients caught the virus while working as a hospital receptionist.

The latest medical acronym to fear is MERS: Middle East Respiratory Syndrome. The virus has killed 83 people in the Arabian Gulf since first emerging in 2012 and now looks as if it could pose a global threat.

This week, the number of new cases rose at a rate that causes concern, the World Health Organization said in a statement.

There have been only about 350 cases detected worldwide in the past two years. But Saudi Arabia has reported more than 50 in just four days. Cases also turned up in Greece, the Philippines, Malaysia and Jordan. All of the patients were exposed to the virus in the Gulf.

There's no treatment or vaccine for MERS, which kills about 30 percent of those who are infected.

The disease hits like a severe flu. Symptoms include fever, coughing and shortness of breath. Most people who die have another medical condition. It's also possible for someone to become infected but show no symptoms.

Many of the new cases occurred in health care facilities in Saudi Arabia and the United Arab Emirates, according to the World Health Organization's Eastern Mediterranean office.

MERS is similar to the SARS virus, which killed roughly 800 people in Asia in 2003. Late in the SARS epidemic, the virus mutated in a way that allowed it to move more easily from person to person. Some MERS researchers are concerned that MERS is evolving in this way.

Scientists don't know where people are initially catching the virus. So it's been hard to control. Once a person gets sick, he can spread it to relatives and medical staff.

Hospital staffs in the affected region should wear gloves and masks, says WHO spokesman Tarik Jasarevic. Equipment should be meticulously sterilized, and every patient should be treated as a possible carrier.

"Some [patients] have mild or unusual symptoms," Jasarevic tells Shots. "For this reason, it's important that health care workers apply standard precautions with all patients."

Because the virus is so deadly and so little is known about how it spreads, MERS patients are supposed to be treated in isolation.

WHO plans to send a team of international disease experts to the region to help contain the problem.

The U.S. Centers for Disease Control and Prevention has been preparing for the possibility that a MERS case could walk off an airplane onto American soil. The agency has drawn up guidelines that call for isolating people who might have been exposed to the disease.

Since the start of the outbreak two years ago, there have been 160 suspected MERS cases in 35 states, says David Swerdlow, who leads the CDC's MERS response team. All of the individuals tested negative.

"So far we've been very lucky," he tells Shots. "But we are vigilant. We are preparing, and we are always watching for possible cases."

The CDC has sent out guidelines to local health departments on MERS. It is also offering assistance in testing for the virus.

If a case does turn up in this country, Swerdlow says, medical investigators should check on everyone with whom that person had been in close contact over the past two weeks. That list includes airline passengers if the person flew to the U.S.

"We don't think that everyone on a flight is necessarily at risk," he says. But efforts would be made to contact every passenger, to see if any have fallen ill: "If there ever were a case, we would probably look at everybody on the flight."

Researchers believe the MERS virus resides in camels. Somehow the virus recently started to jump over to humans. During the early days of the MERS outbreak, most of the cases were in people who work with camels, had drunk milk from camels or eaten camel meat. But now there's been a shift and the virus is being seen in people who've had no exposure to camels but rather exposure to someone already sick with MERS. Clearly the virus is moving from one sick person to another human; often nurses and other health workers.

Swerdlow at the CDC says so far the one positive thing is that there doesn't appear to be a chain of "sustained" human transmission. Right now the virus only moves to a second person and then it appears to stop. If the virus does mutate so that it does have sustained transmission — moving from person to person to person — MERS would then be positioned to be a major global threat. But the virus hasn't shown the ability to do that — at least not yet.