Accessibility links
To Get Help From A Little Kid, Ask The Right Way : Shots - Health News Asking preschoolers to be helpers is more effective than asking them to help, a study suggests. The noun-based approach works with adults, too, psychologists say, but don't take it too far.

To Get Help From A Little Kid, Ask The Right Way

To Get Help From A Little Kid, Ask The Right Way 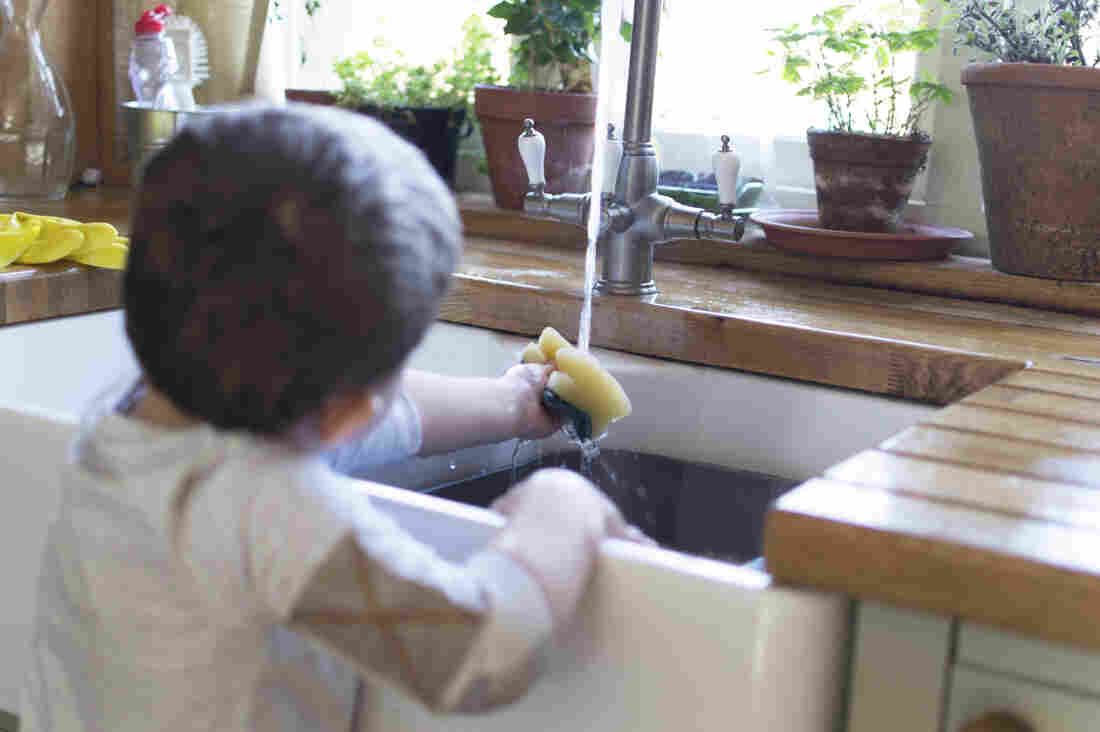 Need a hand with those dishes? iStockphoto hide caption

Motivating children to stop playing and help out with chores isn't exactly an easy sell, as most parents and teachers will attest. But how you ask can make all the difference, psychologists say.

If you say something like, "Please help me," the kids are more likely to keep playing with their Legos. But ask them, "Please be a helper," and they'll be more responsive, researchers report Wednesday in the journal Child Development.

Being called a helper makes kids feel like they're embodying a virtue, says Christopher Bryan, a psychologist at the University of California, San Diego and one of the researchers behind the study.

"It's really important to all of us to be good people," Bryan says. Helping is nice, but helpers are good people.

In the study, experimenters rounded up around 100 preschoolers, and divided them into two groups. One half got a talk about helping, while the other half heard about being helpers.

"Then we got the kids playing with some really fun toys," Bryan says.

While the children were playing, an experimenter gave them various opportunities to lend a hand. Preschoolers who got the talk about being helpers actually dropped their toys to offer aid 20 percent more often than kids who heard a lesson about helping.

Adults frequently talk to kids about being a good boy or a bad boy, a good girl or a bad girl. And kids notice.

The phenomenon isn't unique to kids. In a previous study, Bryan found that asking grown-ups, "How important is it to you to be a voter?" was more likely to motivate them to get to the polls than asking them about the importance of voting.

Interestingly, Bryan says, "Noun-based appeals to not cheat are [also] more effective than a verb-based approach." Sure, you may not want to cheat — but you really don't want to see yourself as a cheater.

Still, when dealing with kids, adults should be careful not to take the approach too far, Bryan says. In some cases, it can set kids up to fall harder if they fail.

"Helping isn't something you can fail at," Bryan says. But drawing is. An earlier study from Stanford University found that kids who were told they were "good drawers" (versus "good at drawing") were much harder on themselves when they thought they had created bad artwork.

When adults put labels on kids — whether it's helper, drawer or something else — the child's identity and self-worth becomes entangled with the label, says Andrei Cimpian, a psychologist at the University of Illinois at Urbana-Champaign, who led the drawing study. "Later, down the line when they encounter difficulties, that's going to be a lot more painful," he says.

When it comes to behavior that's skill-based, Cimpian says, parents might do better to use verbs instead of nouns. For example, instead of telling your little Picasso that she's a great artist, he says, "Say, 'Wow, you spent a lot of time on that. It looks great!' "

And don't sweat the verb-noun choice too much, he says. "It's not that one exposure to a noun phrase will forever make a child afraid of failing."

Still, there's no question that children soak up subtleties in language for clues in how to live, the scientists say.

"Adults frequently talk to kids about being a good boy or a bad boy, a good girl or a bad girl," Bryan says. "And kids notice."