Accessibility links
Obamacare Sign-Ups Show Wide Variation By State, Ethnicity : Shots - Health News Nearly half the 8 million people who bought health insurance through the state and federal exchanges signed up in the last six weeks. Florida enrolled 39 percent of those eligible, despite opposition. 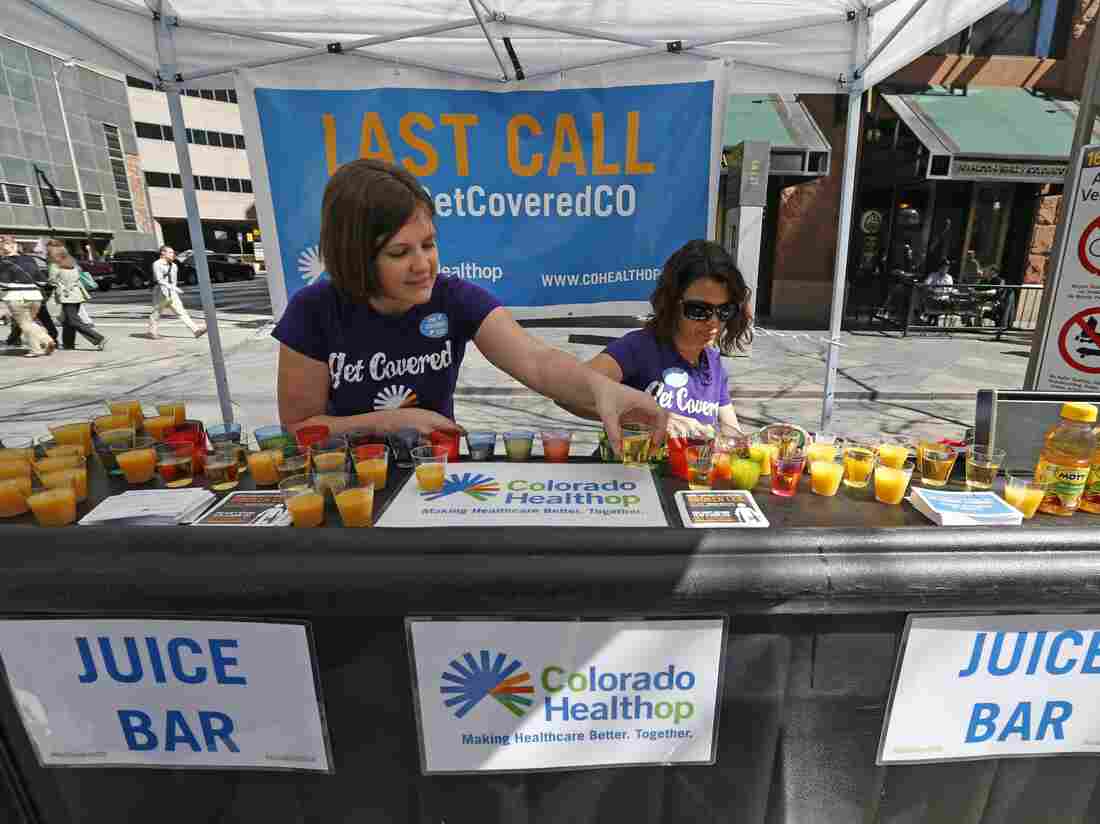 New numbers and demographic information released by the White House Thursday reveal some telling details about the 8 million people who selected new health insurance through HealthCare.gov and state marketplaces.

Almost half — 3.8 million — of all of the people who signed up did so in the last six weeks, according to Health and Human Services Secretary Kathleen Sebelius and other HHS officials who spoke to reporters in a conference call. And nearly a million got coverage after the original March 31 deadline. (Though the Affordable Care Act's first open enrollment period technically ended March 31, it was ultimately extended by a few weeks.)

There was a similar surge of people buying coverage outside the government marketplaces. Gary Lauer, CEO of the large online broker eHealth, says the surge was greater than he expected — "with 50 percent of total applications coming in the last two weeks."

Lauer also announced eHealth's totals Thursday. He says that during this first enrollment period, 213,000 people bought ACA-compliant plans through eHealth's website. And, he says, the company's overall business was 18 percent higher than during the first quarter of last year.

The total number of people buying plans outside of government exchanges is estimated at somewhere between 5 million and 8 million people.

Medicaid also saw a surge in enrollment during the last six months, as 27 states expanded the program (as the ACA encourages). About 4.8 million people signed up for benefits via Medicaid or the Children's Health Insurance Program. About 85 percent of all those who signed up via the exchanges received federal subsidies of their monthly premiums.

Total enrollments came to at least 17.8 million, once you add together numbers from Medicaid, marketplace enrollments and the lowest estimates of how many people bought new ACA-compliant policies outside the exchanges. It's unclear how many of those people were previously uninsured, but Gallup, RAND Corp. and the Urban Institute all say the number of uninsured has declined.

"We're hopeful that states that haven't yet expanded Medicaid will decide to come on board, so we can cover millions more people," Sebelius said.

One disappointment for those hoping to extend health coverage: the relatively few Latinos who signed up for the new health policies. Latinos rank among the most underinsured in America, but the numbers released Thursday suggest that only 400,000 used HealthCare.gov, out of an estimated 10.2 million who are eligible.

That number is just an estimate, though. This is the first time HHS has broken down statistics about enrollees by race, and it only did so for sign-ups that came via HealthCare.gov, the marketplace 36 states use. Any information about race in those sign-ups is self-reported, and supplying it is optional — about a third of enrollees declined to identify their race.

Thursday's HHS data do not include the demographic information from California or New York — two states that are among the 14 operating their own marketplaces instead of using HealthCare.gov. Both states have large Latino populations. HHS's numbers also suggest that African- and Asian-Americans may be overrepresented among enrollees, relative to their numbers in the general population.

Among the 14 states that set up their own health insurance exchanges, California topped the rest in highest percentage of enrollments among those eligible — except for Vermont, which is setting up a single-payer system.

The Golden State enrolled 43 percent of the Californians estimated to be eligible to use its marketplace. That's compared to a 28 percent rate of enrollment for states overall.

The 12 states that enrolled the highest percentage of eligible residents all signed up at least 30 percent or more of those eligible. Most relied on their own state-run exchange. At the bottom of the list, 17 states enrolled fewer than 20 percent of eligible residents (and most of those states relied on HealthCare.gov). Texas, the state with the highest number of uninsured, was in the bottom half of states for enrollment. And Florida surprised many by signing up 39 percent of those eligible — fourth among all states, despite substantial political opposition to the health care law.

States with their own exchanges were given widely varying amounts of money by the federal government to establish and market their exchanges; it's too early, analysts say, to determine which spent taxpayer money most effectively.

"I don't see how you can possibly do it," says MIT economist Jonathan Gruber.

Economist Douglas Holtz-Eakin agrees that it's too soon to evaluate the country's investment in state exchanges.

"There's no pattern," he says. "Kentucky's been very successful with a pretty bare-bones setup. We've seen very expensive efforts in Oregon now being turned over to the federal government."

The White House considers the 8 million mark a triumph, exceeding its initial goal of 6 million for the Affordable Care Act's first six-month enrollment period. And of all those who signed up, 28 percent are in the 18–34 age range — a group coveted by insurers because young adults tend to be healthy.

The total number of people with health coverage nationwide is expected to continue to grow despite open enrollment being closed now for almost all states until November. Several states extended their enrollment periods (Nevada's is open year-round), and Medicaid has no limits to its enrollment period — people can continue to sign up.

This story is part of a reporting partnership with NPR and Kaiser Health News.