Accessibility links
When A Yoga Teacher Ticks You Off, Is It Rude To Walk Out? : Shots - Health News The reasons we go to yoga are many, from building strength to finding calm. But a teacher's style might add to your stress level. Is it OK to abandon class? Or are there reasons to stick it out? 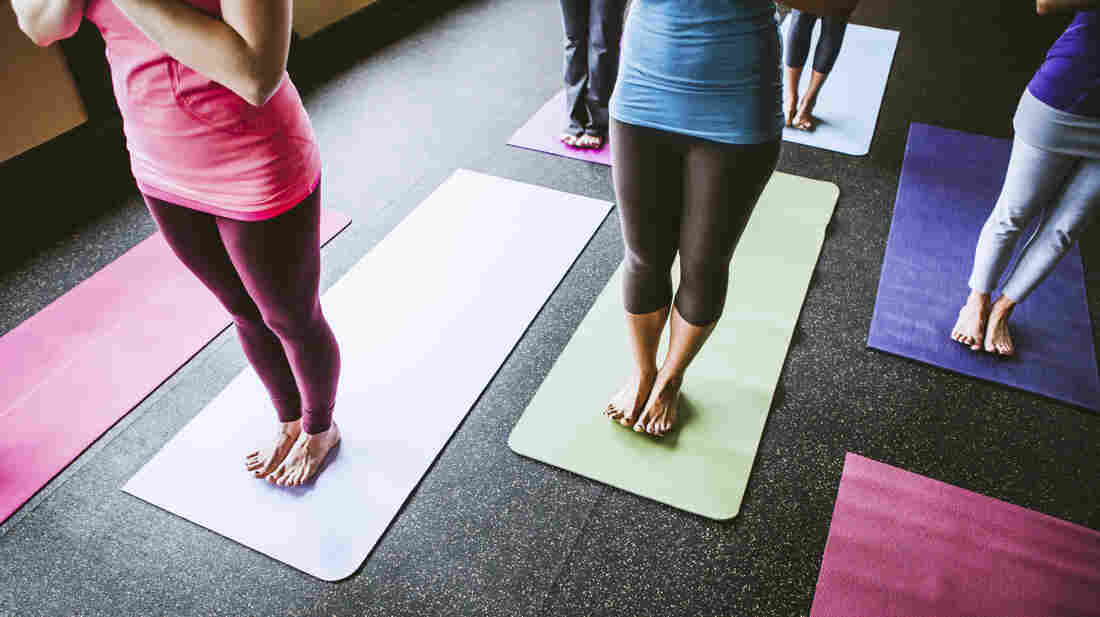 Shut up and suffer, or split? iStockphoto hide caption

You've made a commitment to yoga to improve your health.

So there you are in class, with a teacher you've never had before. And while you're flipping your down dog, you realize you're not exactly flipping over the teacher.

Maybe the teacher is a yoga bully: "OK, everybody up for wheel! People in the back row, what's your problem?"

Maybe the teacher is making absurd claims about yoga ("Doing an inversion is like having a face-lift!").

Or it's hot yoga and you're thirsty and the teacher says, "Don't drink!" But ... you are really thirsty!

Or maybe the teacher just doesn't seem to know what he or she is doing. And is actually reading from a yoga book to describe a pose.

I've been in all those situations. (I've also been in classes with amazing teachers who make the minutes fly by and who make me feel so much better than when I did my first down dog of the day, so don't accuse me of being a yoga basher.)

And I know that staying with a yoga class can be a very good thing. Studies show that the ancient practice can improve flexibility, offer relief for back pain and reduce stress.

But in those classes where everything isn't flowing my way, the question lurks: Should I pack my mat and go? Or is that bad yoga etiquette? And is there any benefit to sticking it out?

I put the question to yoga teachers. None of them think you can never leave. But some of them definitely leaned toward the idea of staying.

Biceps Curls And Down Dogs May Help Lower Diabetes Risk

"I think it's good to respect the space and maybe come to child's pose," says Fanny Oehl, who teaches at Yoga Shanti New York. "Unless you think you're endangering yourself, I would relax on the mat."

"I have suffered through some miserable classes," says Peg Mulqueen, who teaches at Flow Yoga in Washington, D.C. "Somebody would have to be doing something pretty egregious for me to walk out. If someone is doing something harmful or going to destroy me, I guess I would pack up and go. Otherwise, it's all a learning experience: You're learning what you didn't want. If you sit through a class, and oh my God that instructor would not shut up, you've learned you want to find a class with minimal talking."

Other instructors say it's worth sticking it out. "I say to people [who want to leave] take a moment. Why are you leaving? Are you being a spoiled brat?" says Ilona Holland, who teaches in Council Bluffs, Iowa. "Stay till the end, even if you do savasana [aka corpse pose]. Say OK, I did it, I saw it out to the end and it's really not for me."

Look inward before heading outward, says Laura Parris, founder of Georgetown Yoga Therapy in Washington, D.C. "If you go to a class where you feel uncomfortable in any way, first look at your own biases: 'Am I being a little too judgmental? Maybe I can relax a little more, be a little more accepting.' But if it becomes intolerable, if you feel you're being abused in some way, leave."

One example: Her 67-year-old mother went to a class where "the teacher was yelling at her about not being able to get into her position correctly."

In that situation, Parris says, "Don't stand for any kind of abuse." And tell the studio why you're walking out.

Then again, some yoga teachers don't believe you need to experience major abuse to take a hike.

"If you're feeling like you are not into the class, just leave," says Ayanna Smith, who teaches in Maryland and Washington, D.C. "I've had people do that to me. I don't feel any way about it. I know they're doing what's right for them."

Next time I'm not connecting with a class, I may just take her advice! If you have a different point of view, go ahead and make me eat crow pose!