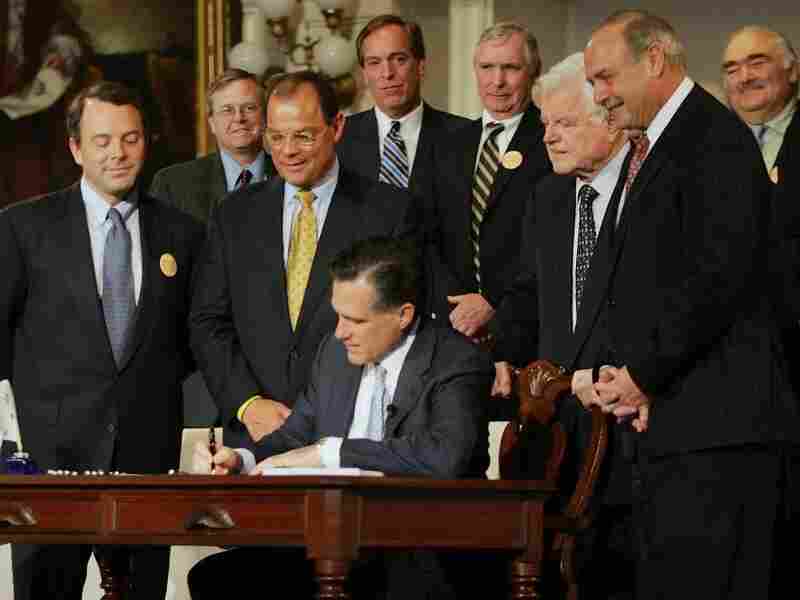 Massachusetts Gov. Mitt Romney signed a health care reform bill during an April 12, 2006, ceremony at Faneuil Hall in Boston. The bill made Massachusetts the first state in the country to require that all residents have health insurance. Joe Raedle/Getty Images hide caption 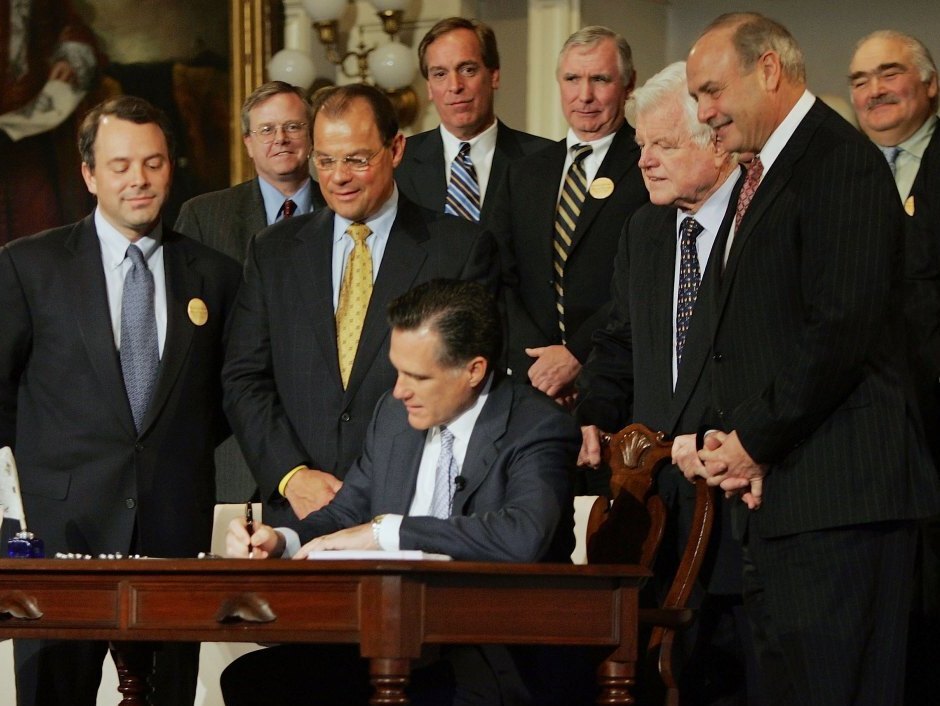 Massachusetts Gov. Mitt Romney signed a health care reform bill during an April 12, 2006, ceremony at Faneuil Hall in Boston. The bill made Massachusetts the first state in the country to require that all residents have health insurance.

Fewer people died in Massachusetts after the state required people to have health insurance, according to researchers from the Harvard School of Public Health.

In each of the first four years of the state law, 320 fewer Massachusetts men and women died than would have been expected. That's one life extended for every 830 newly insured residents.

Massachusetts passed its mandatory universal health coverage law in 2006 under then-Gov. Mitt Romney. The hope was that when people have health insurance, they would be more likely to get preventive care, go to the doctor when they become ill, and live longer.

Now there's evidence of that link, according to a study published Monday in the Annals of Internal Medicine. In the first four years of universal health insurance, the state's death rate dropped 2.9 percent when compared to similar counties outside Massachusetts that did not expand health coverage.

White residents are living longer, but the biggest improvement in life expectancy came for blacks, Asians and Latinos, whose death rates dropped 4.6 percent. Barbara Ferrer, executive director of the Boston Public Health Commission, says the study builds on prior research showing that health coverage is reducing income and racial disparities in Massachusetts. She's hopeful the state is on a path to eliminate health disparities altogether.

Lessons For The Obamacare Rollout, Courtesy Of Massachusetts

"I would be surprised if we didn't see a closing of the gap that could be attributed to improved coverage rates," Ferrer says. But, she continues, "We have to be a little bit wary, that you can't just insure people without making sure that they have access to high quality services. But certainly in Massachusetts we're able to do both."

Dr. Ben Sommers, an assistant professor of health policy and economics and the study's lead author, says the most significant decline was in conditions including cancer, infections, heart disease and other ills that could be prevented or delayed with medical care. "Meanwhile, in some other causes of death that are less amenable to health care, such as car crashes, homicide, suicide, we didn't find any statistically significant changes," he says.

Sommers coauthored the paper with Dr. Sharon Long of the Urban Institute and Dr. Katherine Baicker of the Harvard School of Public Health. They say the findings are encouraging for states in the early stages of implementing the Affordable Care Act.

But Douglas Hotlz Eakin, president of the American Action Forum, is skeptical. He says the study does not prove that coverage lowers death rates. The authors, he says, "don't directly observe how people interact with the medical community. " They reach their conclusions "by inference and process of elimination. There's a limit to that."

He says to beware of drawing too many conclusions from this one state.

"If there's one thing we've learned about health care reform, Massachusetts doesn't look like the rest of the country. People are always skeptical about expanding to the whole US the findings from a Massachusetts experiment."

Alan Weil, director the National Academy for State Health Policy, says many opponents of the Affordable Care Act acknowledged that there would be health benefits to insuring more people through the federal law, but that they "don't feel that the nation can afford it or that it's an appropriate role for government. And if that's the basis of your opposition, I think additional evidence that it might improve people's health is unlikely to change your overall view of the law."

This study takes the research into role of health insurance a step further, says author Sommers.

"We already had a large body of research that showed the uninsured rate had dropped, people were able to access services and that they felt better," Sommers says. "This adds another important piece to that, which is that people are living longer."

This story is part of a collaboration with NPR, WBUR and Kaiser Health News.