Accessibility links
Driving While Pregnant Is Riskier Than You Might Think : Shots - Health News Expectant mothers are more likely to get into serious car crashes, a study finds. The risk is highest in the second trimester, when accident rates are similar to those for people with sleep apnea.

Driving While Pregnant Is Riskier Than You Might Think

Driving While Pregnant Is Riskier Than You Might Think 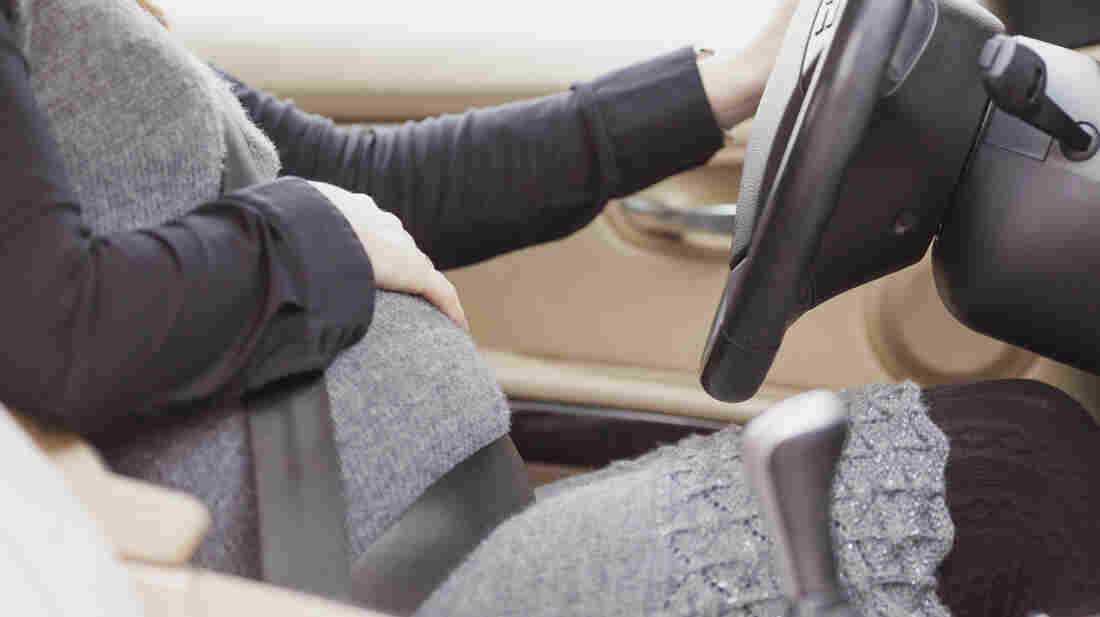 Be a bit more careful? The risk of a traffic accident rises by about 40 percent during the second trimester of pregnancy. iStockphoto hide caption

Don't scuba dive. Be careful about flying. Stay out of those hot tubs. Pregnancy comes with a long list of do's and don'ts.

Expectant mothers are more likely to have serious car crashes, a large study out of Canada finds.

The risk is the greatest during the second trimester, when a woman's chance for getting into an accident is about the same as someone with sleep apnea, doctors report Monday in the Canadian Medical Association Journal.

"We aren't recommending pregnant woman delegate their driving to their husbands," says emergency room doctor Donald Redelmeier, who led the study. "Young adult men are even more dangerous behind the wheel. They have even higher crash rates [than pregnant women]."

"That seems like such incredibly banal advice to give. I realize that," Redelmeier says. "But every one of our crashes in the study could have been avoided by a small change in driver behaviors."

The risk of an accident drops off in the third trimester of pregnancy, the study finds. After the baby is born, the rate of serious car crashes is even lower than it was before pregnancy.

Redelmeier was one of the first researchers to study the link between cellphones and car accidents, way back in 1997. He got the idea to look at pregnancy and driving because, paradoxically, his patients never brought up the subject.

"Patients who are pregnant ask me the strangest questions about scuba diving, flying and roller coasters," Redelmeier says. "They never talk about road safety, despite it being a substantially larger threat to health."

To figure out the risk, Redelmeier and his team analyzed the medical records of more than 500,000 mothers in Ontario. They looked at data for each woman for five years: four years before the baby was born and then a year after the birth.

The study didn't look at the reasons for the bump in accident rate during the second trimester. But Redelmeier thinks it may be because of all the hormonal changes during pregnancy.

"We've known for a long time that pregnancy causes fatigue, insomnia, nausea and stress," he says. "What we wondered was how all those factors might contribute to driver error and the possibility of a life-threatening motor vehicles crash ... I was surprised by the magnitude of the effect. ... It's a substantial risk."

And a visit to the ER is the last thing an expectant mom needs, Redelmeier says.

"These individuals are enormously problematic to care for," he says. "Many of the standard procedures, such as CT scan of the abdomen, are contraindicated for pregnant women ... These are circumstances that are best avoided."