Accessibility links
Employers May Start Paying You To Buy Health Insurance : Shots - Health News It costs a lot for companies to buy health insurance, so the idea of giving employees money to buy their own coverage has a lot of appeal. But it might end up being more expensive for workers.

Employers May Start Paying You To Buy Health Insurance

Employers May Start Paying You To Buy Health Insurance 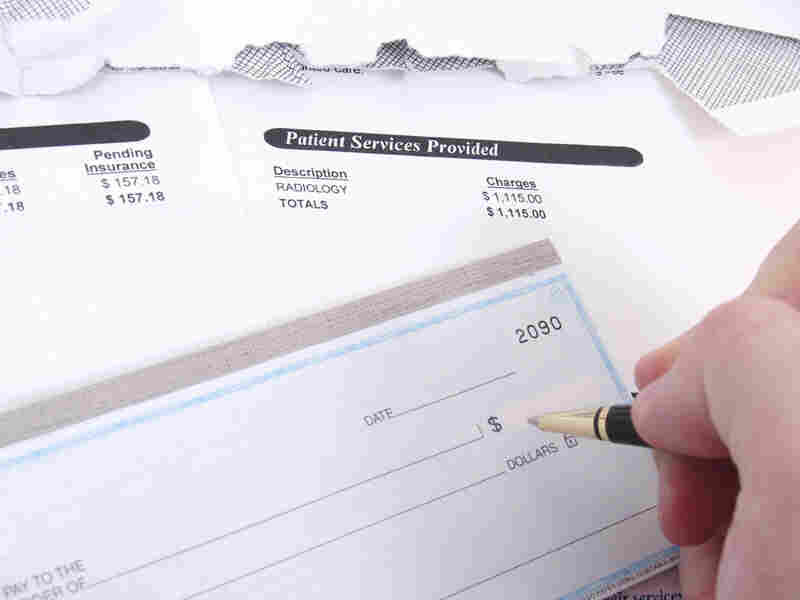 What if employers started giving workers a chunk of cash to buy health insurance on their own instead of offering them a chance to buy into the company plan? Are workers ready to manage their own health insurance like they do a 401(k)?

The idea that employers might drop their health plans and replace them with a "defined contribution" for employees has been around for years. It's one way for employers to control their expenses in the face of the relentlessly rising costs of health care.

Now that the Affordable Care Act has made non-company plans more accessible and affordable by creating online marketplaces where people can shop for coverage, the idea is gaining traction.

"The technology has caught up to the concept," says Paul Fronstin, director of the health research and education program at the Employee Benefit Research Institute.

Some analysts anticipate a major shift to these plans in coming years. A recent study by S&P Capital IQ predicted that 90 percent of workers who now get their health insurance through a job will be moved to health insurance exchanges by 2020.

But a wholesale shift away from employer-sponsored coverage is unlikely. For one thing, under the health law employers with 50 or more workers that don't offer health insurance will likely face a penalty of $2,000 per worker (minus the first 30 workers), beginning in 2015.

If employees do drop coverage, it could be a huge change from the way things are now. The employer-paid subsidies to monthly premiums that employees get for employer-sponsored group coverage currently aren't taxed as income to the worker.

If an employer dropped group coverage and instead offered employees $5,000 to buy an individual plan on an exchange, workers would owe income tax on that amount. Employees earning less than 400 percent of the federal poverty level (right now that's $45,960 for an individual or $94,200 for a family of four) could qualify for tax credits to reduce the cost of their monthly insurance premium, but workers who earn more than that wouldn't benefit.

These online marketplaces, which got their start several years ago as a way to transition retirees from company plans to Medicare, are increasingly being offered to active employees. Benefits consultants including Mercer, AonHewitt and Towers Watson run private exchanges for a growing roster of companies like Walgreens, Arby's restaurants and Petco.

Once employers have selected a private exchange for their workers, they typically give employees a set dollar amount to shop among sometimes dozens of health plans offered by different insurers. The employer may limit the plan choices available to employees. Since the employer is sponsoring the coverage for the group, workers don't owe income tax on the contributions they receive.

"Employees get a much broader choice of plans and a choice of insurance company," including access to multiple insurance company provider networks, says Ken Sperling, national exchanges strategy leader at AonHewitt. Typically people would have a choice of five plan levels and three to five insurers, up to 25 options in all, he says.

Employers, meanwhile, get what they want: predictable health care costs. With a defined contribution arrangement, "the employer can increase or decrease the amount over time depending on business needs," says Eric Grossman, a senior partner at Mercer.

While giving employees more plan choices could be a plus for some workers, it could also encourage them to buy less expensive, less comprehensive coverage than they would otherwise have gotten through their employer.

"This idea that people are overinsured — somewhere along the way this became the conventional wisdom," says Karen Pollitz, a senior fellow at the Kaiser Family Foundation. People are only overinsured if they don't get sick, she adds. Continued cost shifting to employees means that "we've gone way beyond skin in the game. Now people have vital organs in the game."