Accessibility links
Meds Can Help Problem Drinkers, But Many Doctors Don't Know That : Shots - Health News People are rarely offered medication to help them stop drinking. But there are drugs that work, and they don't make you sick. Instead they target the underlying mechanisms of addiction. 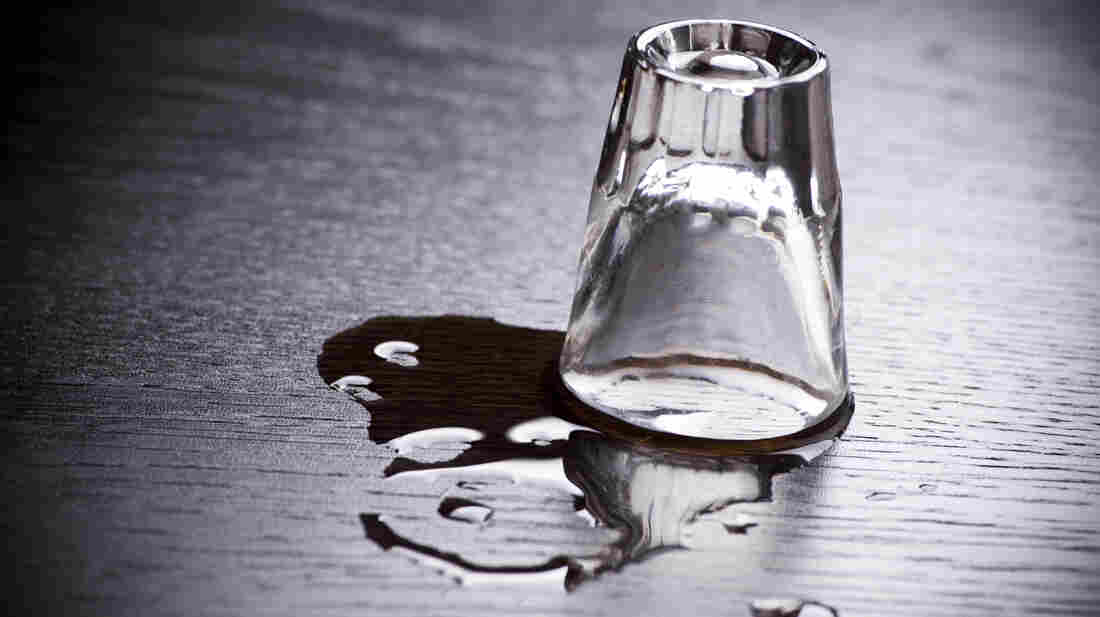 If you tell your doctor you'd like to stop drinking, odds are he's not going to give you a pill. That's too bad, a study says, because there are medications that can help people with drinking problems get off the sauce.

And they're not going to make you sick like Antabuse, a medication used for decades to treat alcoholics that makes them wretchedly ill if they drink.

Instead, these are drugs that address the brain chemistry that gets messed up by alcohol. In an analysis of 122 randomized controlled trials, both acamprosate and naltrexone helped people either quit drinking or cut back substantially.

If He's Sexually Aggressive In Bars, It's Not Because He's Drunk

"We have medications that can help," says Dr. Daniel Jonas, an associate professor of medicine at the University of North Carolina in Chapel Hill. He's the first author on the study published Tuesday in JAMA, the journal of the American Medical Association.

But patients seeking help with a drinking problem are prescribed the drugs less than 10 percent of the time, Jonas told Shots.

One reason is that most people don't get any treatment of any sort for a serious drinking problem. Another is that many doctors just don't know that there are drugs beside Antabuse, even though acamprosate and naltrexone were approved by the Food and Drug Administration back in the 1990s. "It's been quite a bit of a secret," Jonas says. "It doesn't get advertised."

This study doesn't look at social drinkers; rather it's about people who are really having problems with alcohol, such as wanting to cut back but not being able to. About 20 percent of men have an alcohol use disorder at some point in their lives, as do 8 percent of women.

Still, these medications are no easy fix. With acamprosate, for instance, 1 in 12 people using it stopped drinking completely. And all of the people in these studies were also getting behavioral therapy to help them deal with the complex social cues and habits surrounding drinking. "It's really hard to quit, and it often takes many attempts to be successful," Jonas says.

The study also found benefits in nalmefene and topiramate, two medications that are also prescribed for alcohol dependence, but are not specifically approved for that by the FDA. A study published last month found that topiramate helped reduce drinking in people with a specific gene variant, suggesting that new medications could be developed to target those neurotransmitter systems.

This study suggests not only that a lot more people might benefit from using medication along with behavioral therapy, but also that some people might get help from medication alone. "People are starting to ask the question, could we just be using the medication, could it be beneficial?" Jonas says. "We don't really know the answer to that based on the studies we have."

Historically addiction has been treated in behavioral health settings or through 12-step groups, says Dr. Katharine Bradley, a senior investigator at the Group Health Research Institute in Seattle, who co-wrote an editorial accompanying the study. "But there's a transition now. We're moving addiction back into the medical system."

That's not to say that people shouldn't go with a 12-step program or purely behavioral treatment, she says, but that people should be offered options. She's working on a study to do just that. "Our hope with these medications is that as people become aware of them it will help destigmatize addiction, and move it further into the medical setting for patients who want that."