Accessibility links
Don't Salmon, Don't Shoal: Learning The Lingo Of Safe Cycling : Shots - Health News More and more people are bicycle commuting, but many haven't mastered the intricacies of bike etiquette. What the heck is a sharrow? Knowing that can make for a safer trip by bicycle or (gasp) car. 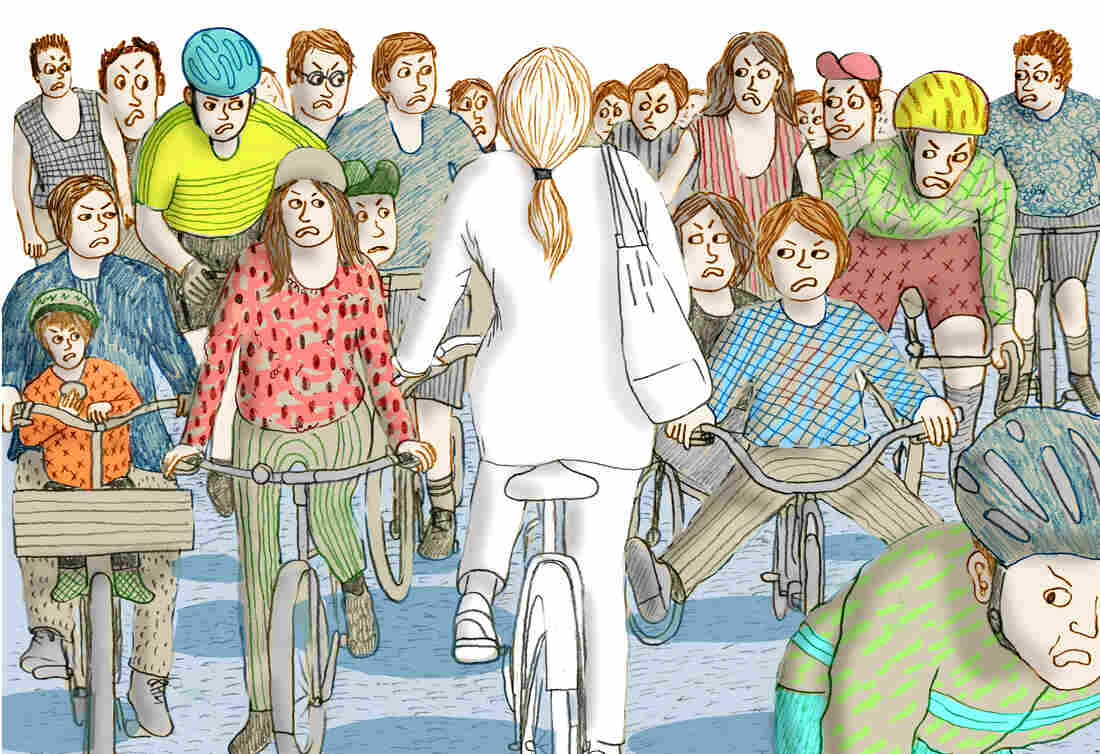 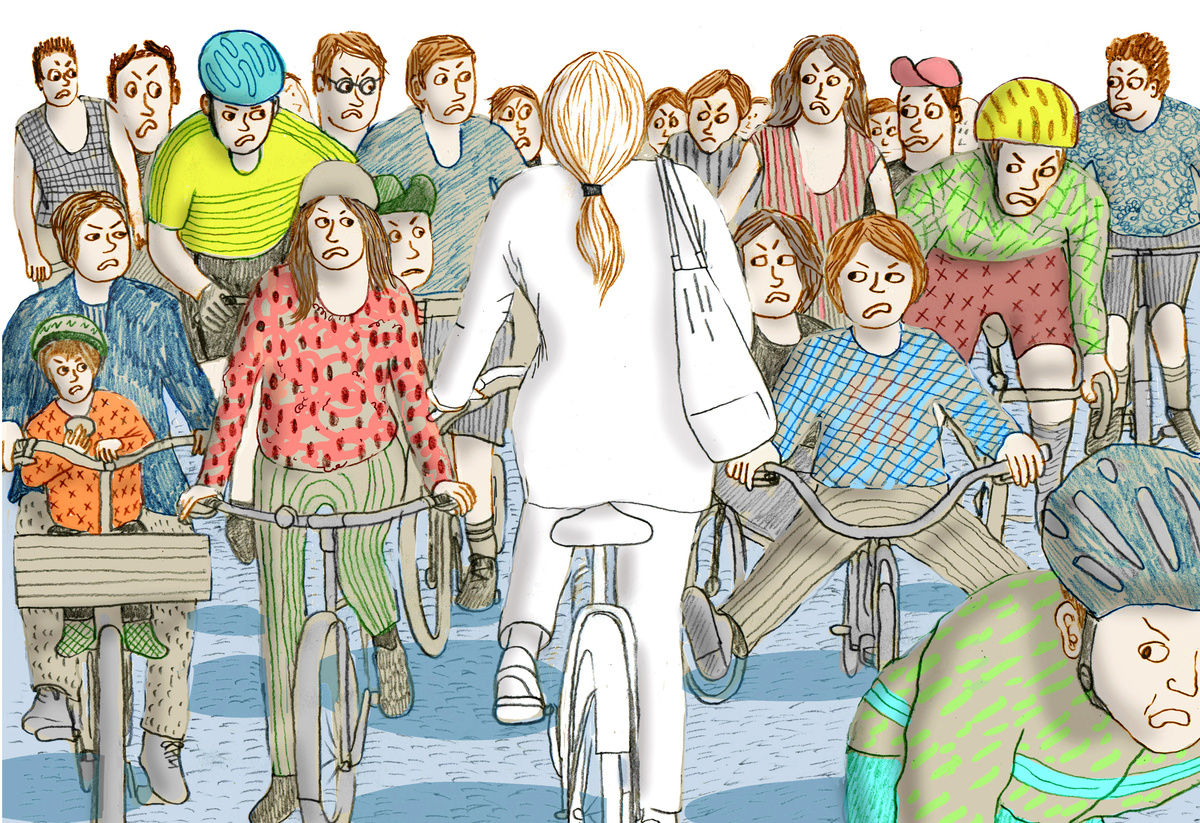 What's that salmon doing in the bike lane?

Alec Baldwin, you were salmoning!

The actor was ticketed in New York on Tuesday for riding his bicycle the wrong way on a one-way street.

Cyclists use the term "salmoning" to describe a biker going against the stream on a one-way bike lane. Surely the definition can be broadened to include Baldwin's infraction.

While salmoning is a funny word, it's a dangerous action. In a bike lane, it can bring on an unwelcome game of chicken when a wrong-way cyclist heads toward cyclists going the proper way. Salmoning also creates a potential hazard for motorists crossing a bike lane via a legal cut-through. They'd assume they only need to scan in one direction for incoming pedalers. Some cities discourage salmoning with clever signage, like this in London: "If you can read this you are biking the wrong way."

In honor of National Bike to Work week, I've collected a few examples of cycling jargon that's all about safety.

Across The U.S., Bicycle Commuting Picks Up Speed

Door zone: That's the space right next to the parked car lane. If a motorist opens the door, a passing cyclist can get "doored." Cyclists have been severely injured or killed from hitting the door or being bounced into traffic.

In many municipalities, it is illegal to open a door into traffic, which includes bicycles, says Greg Billing, advocacy coordinator for the Washington Area Bicyclist Association. When riding in a bike lane up against parked cars, "ride on the outermost third of the lane, nearing the white line," he suggests. In other situations, keep 3 to 4 feet from parked cars, putting you out of the zone, or at least far enough away that you can take evasive action if a door opens.

Sharrow: A cyclist is riding in a bike lane. The bike lane ends. In the middle of the lane of traffic ahead sits a stenciled cyclist and a couple of chevrons. That painted symbol is a "sharrow" –- a shared lane arrow. It's only been around a decade or so, reminding motorists there will be cyclists ahead, says Andy Clarke, president of the League of American Bicyclists.

Of course, cyclists have the right to ride in any lane; skeptics worry that drivers might think they don't have to share the lane if there's no sharrow. "The jury's still out on some of these signs," says Clarke. As a commuting cyclist, I share the sharrow view of D.C. commuter Evan Wilder: "I imagine the motorist thinking, 'Oh, right, it's OK that the biker's in the middle of the road.' "

Bike box: That's a box painted between the crosswalk and the white line that shows motorists where to stop, with bikes stenciled within its borders. The benefit: A cyclist can easily switch from one side of the street to the other to make turns. This kind of arrangement is called an "advanced stop line" in the Netherlands, where it began, and the bike-loving Dutch actually have two traffic signals at intersections: one for bicyclists in the box, to give them a head start, followed by the signal for motorists.

Ninja: That's a night rider who wears dark clothes and eschews bike lights. Not only a bad idea, but against the law in every state — a white front light and rear reflector or light are required.

Shoaling: A shoal is a school of fish. Or a collection of cyclists at a red light. That's where shoaling happens. A cyclist comes up to the light, eyeballs a cyclist already there, thinks, "I'm faster than that person," and moves ahead.

But who can truly judge a cyclist's speed potential? Maybe the person you've shoaled is faster than you and will want to pass you once the light changes. To avoid triggering such unnecessary passes (not to mention road rage), "it's safer for people to wait at the light with everybody else and make the pass in the lane," says Billing. Or if you're really in a rush, just ask the other cyclist: "Hey, I'm late, is it OK to get in front of you?"

Idaho stop: Since 1982, Idaho law has given cyclists the right to treat a stop sign as a yield (slow down and roll through if traffic allows) and to treat a red light as a stop sign (look both ways and proceed if no cars are coming). That's the Idaho stop. It's the law only in Idaho, although there are a few local variations. Several Colorado towns have adopted the "stop sign = yield" portion. And in some states, if a red light only turns green when a sensor senses a car, a cyclist can proceed after 120 seconds or so.

The Idaho stop is hotly debated. In Idaho, notes Clarke, "the sky has not fallen, there's not a terrible crash rate. It probably legitimizes what's already happening."

Then again, in a world where drivers think bicyclists are renegades, Clarke thinks a big push for the Idaho stop would not go over well. "Red lights should be inviolate," he says, but "the mechanics of stop signs are different -– having to put your foot down at every stop sign is often pointless. Most cyclists can roll through without any harm."

Meanwhile, I bet Alec Baldwin has done his share of Idaho stops. In fact, I bet just about every cyclist has, except maybe the cyclist who once yelled at me for doing an Idaho stop at a light: "You're making cyclists look like they don't obey traffic laws!"