Accessibility links
Will Soda Lovers Drink To Less Sugar? : The Salt U.S. sales of sugared and diet sodas have slumped. So soda-makers are trying to win back consumers with new flavors and less sugar. But historically, midcalorie sodas haven't sold very well. 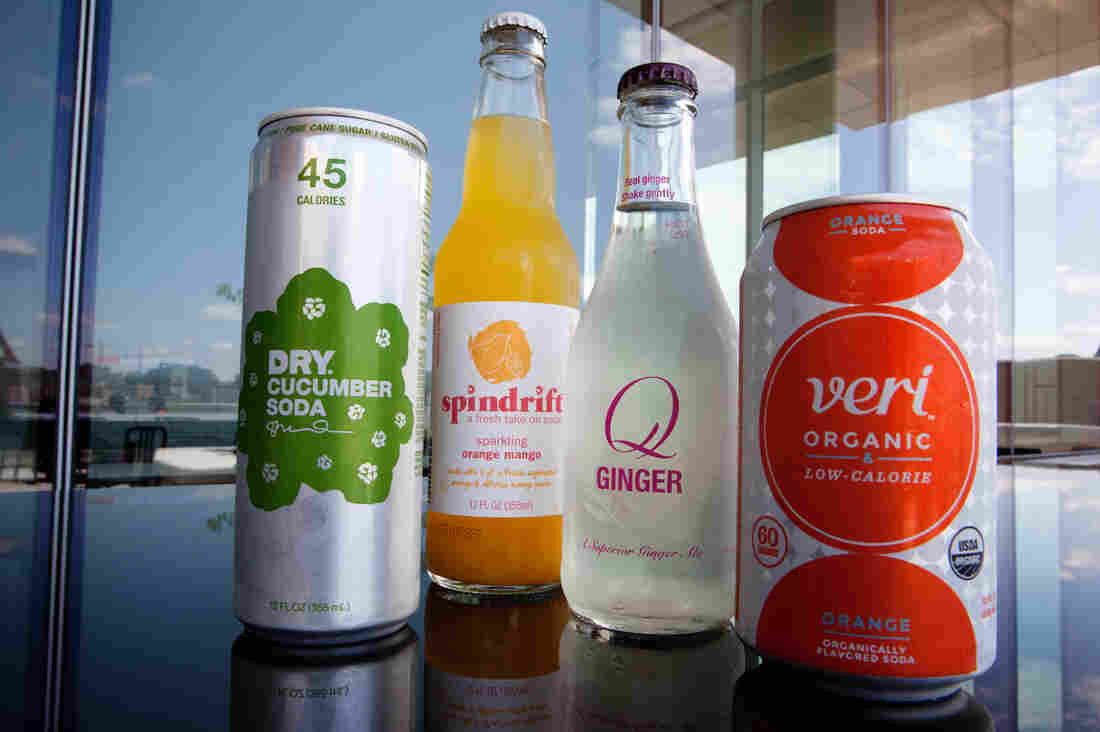 Who's a member of the Pepsi Generation? Anyone?

Would anyone still "like to buy the world a Coke"?

Yes, it's tough times for Big Soda in the U.S. The numbers alone make it clear. "The entire [U.S.] carbonated soft drink category has been down for nine years," says John Sicher, editor of Beverage Digest. "Diet [soft drinks] are declining at a steeper pace than sugared [soft drinks]," likely because people are concerned about artificial ingredients.

But soda-makers aren't giving up. They think midcalorie soft drinks are a trend waiting to happen — that's the classification for soft drinks with roughly 60 to 100 calories in a 12-ounce serving, and 4 to 6 teaspoons of sugar. The same serving of a regular soda has 140 to 150 calories and 11 or so teaspoons of sugar or high fructose corn syrup.

At Coke, hopes are high for Coca-Cola Life, sweetened with half the sugar of a regular Coke along with the no-calorie sweetener stevia. It's been launched in Argentina and Chile so far. A spokeswoman calls it "a unique, great-tasting option for those looking for beverages with fewer calories."

Pepsi and Dr Pepper are also testing new formulas for midcalorie sodas. Like Coke, they're cutting sugar and adding stevia, perhaps because, unlike some of the artificial sweeteners, it's not linked to health concerns. Health advocates agree: "We wanted more testing but it's probably safe," says Michael Jacobson, executive director of the Center for Science in the Public Interest.

Stevia does have a distinct aftertaste — some would call it bitter or metallic. The soda-makers all claim to have figured out ways to fight that.

But there's more than one way to make a midcal soda. Small artisan soda-makers believe you can cut the sugar and still create a taste sensation. They're betting that some Americans will prefer a subtler soft drink — and unconventional favors. Cucumber or juniper berry soda, anyone?

Dry Soda owes its birth to Sharelle Klaus' pregnancies. She gave up wine but still wanted a "unique flavor" beverage to pair with food. She experimented in her kitchen at first. It took more than 1,000 tests to perfect lavender, rhubarb and other offbeat sodas.

Don't add ice, Klaus advises. "They were developed to drink out of a champagne flute." In fact, the name Dry Soda is a homage to dry wines.

Jordan Silbert of Q Drinks is another kitchen experimenter who launched a small soda company. Q stands for quinine, an ingredient in the tonic water that marked his entry into the beverage biz in 2007.

His 8-ounce bottles are sometimes sweetened with cane sugar (it goes well with flavors like lemon orange and grapefruit, he says) but earthy agave seemed the best choice for ginger ale.

Spindrift spent three years perfecting its sodas, which typically have fruit flavors like blackberry and mango orange. The goal is "to be as true to the actual fruit as possible," says a spokeswoman. There's even pulp in some. Spindrift also has a line of seltzers, with calories that run from 10 to zero: It's just carbonated water with fruit juice.

Market share is so small that no one is tracking these small fry, but they all report that sales are increasing. And that's something considering the price: around $1.50 a bottle.

"They're pretty small, but more power to 'em," says Jacobson of CSPI. If you want a soda, he figures, fewer teaspoons of sugar are a good thing.

But what do these new breed sodas taste like?

We arranged a taste test. Coke, Pepsi and Dr Pepper could not provide samples of their new midcalorie lines, so Veri Soda represented the sugar-plus-stevia category.

There were lots of snarky comments, as you might expect from a crowd of thirsty journalists. 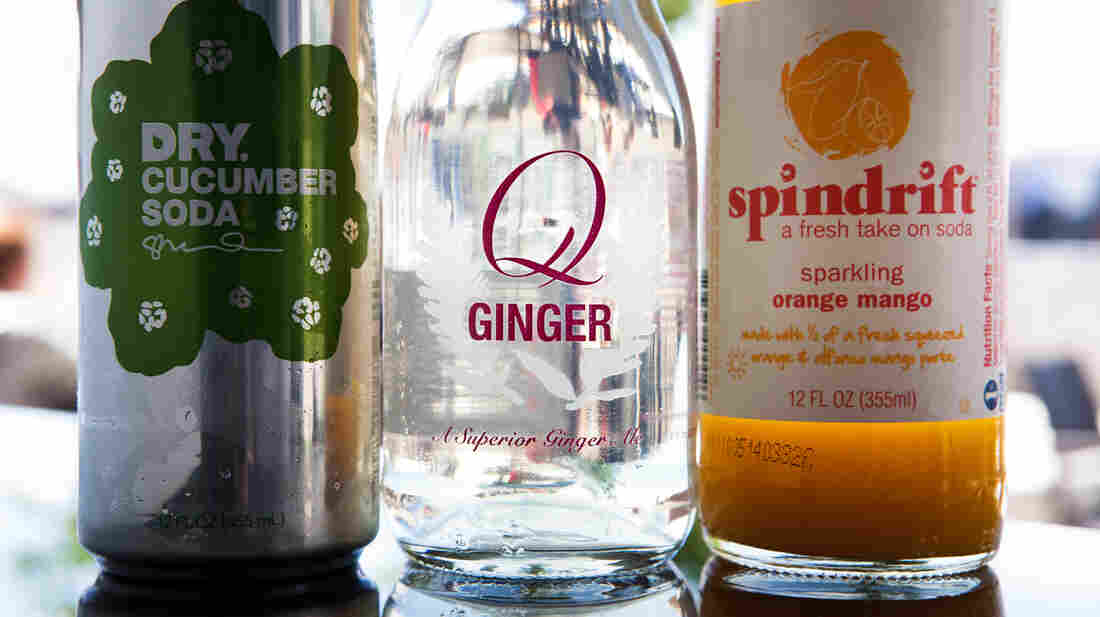 Dry Soda, Q Drinks and Spindrift are a few of the sodas we tried. Maggie Starbard/NPR hide caption 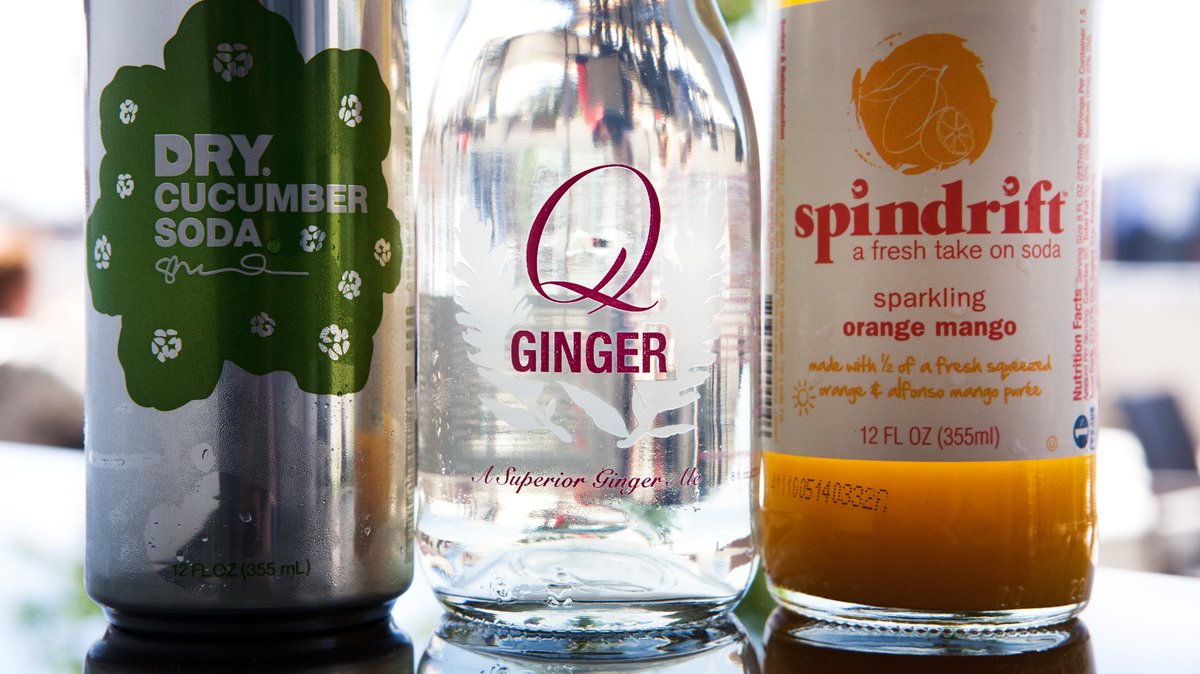 Dry Soda, Q Drinks and Spindrift are a few of the sodas we tried.

"Juniper berry is like a weak version of Scope."

Then there were the backhanded compliments: "Pear soda is nice enough. I don't regret drinking it."

But basically, every soda found its fans, even Dry Soda's cucumber: "Refreshing and not too sweet. It'd be nice with gin."

One taster is eager to enhance Dark 'n' Stormys with the "good kick" of Q ginger ale.

Veri Soda's sugar-stevia blend also won over taste buds. One person is ready to switch from mainstream cola to the Veri Soda version. Sure, there's an aftertaste, she said, but she didn't mind that much. Another said Veri Soda's orange had "that orange creamsicle taste," giving it a slight edge over the also tasty orange from Q.

To sum it all up: "Soda is so much better," one taster said, "with half the sugar."

Will the public buy it? Sicher of Beverage Digest isn't sure: "Midcals in the U.S. historically have not worked well." RIP, Coke C2 and Pepsi Edge. He adds: "It's too early to tell whether [midcalorie] products will be successful."

An earlier version of this story suggested that John Sicher thinks people's fears of studies that have linked some artificial sweeteners to cancer have led to the drop in diet soda sales. In fact, Sicher says the drop may be tied to concerns about artificial ingredients.