Accessibility links
Should HPV Testing Replace The Pap Smear? : Shots - Health News The recent FDA approval of an HPV test to screen for cervical cancer has ignited debate among doctors. Some say the viral test will catch cancers earlier. Others warn it increases needless biopsies. 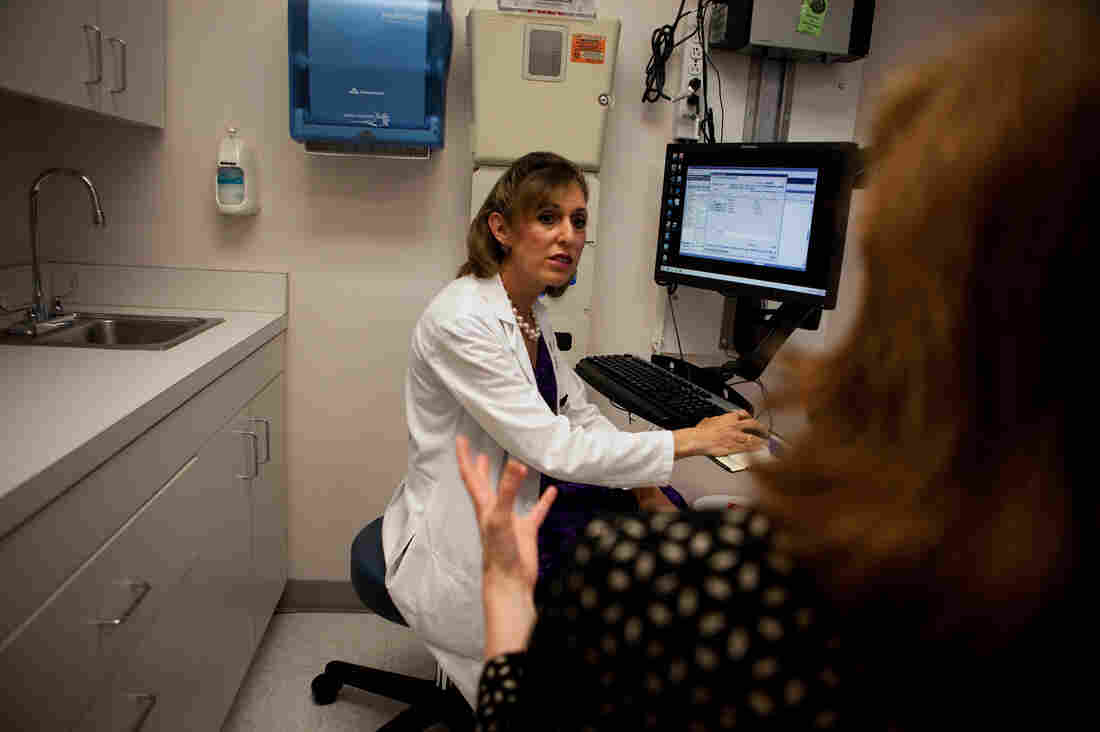 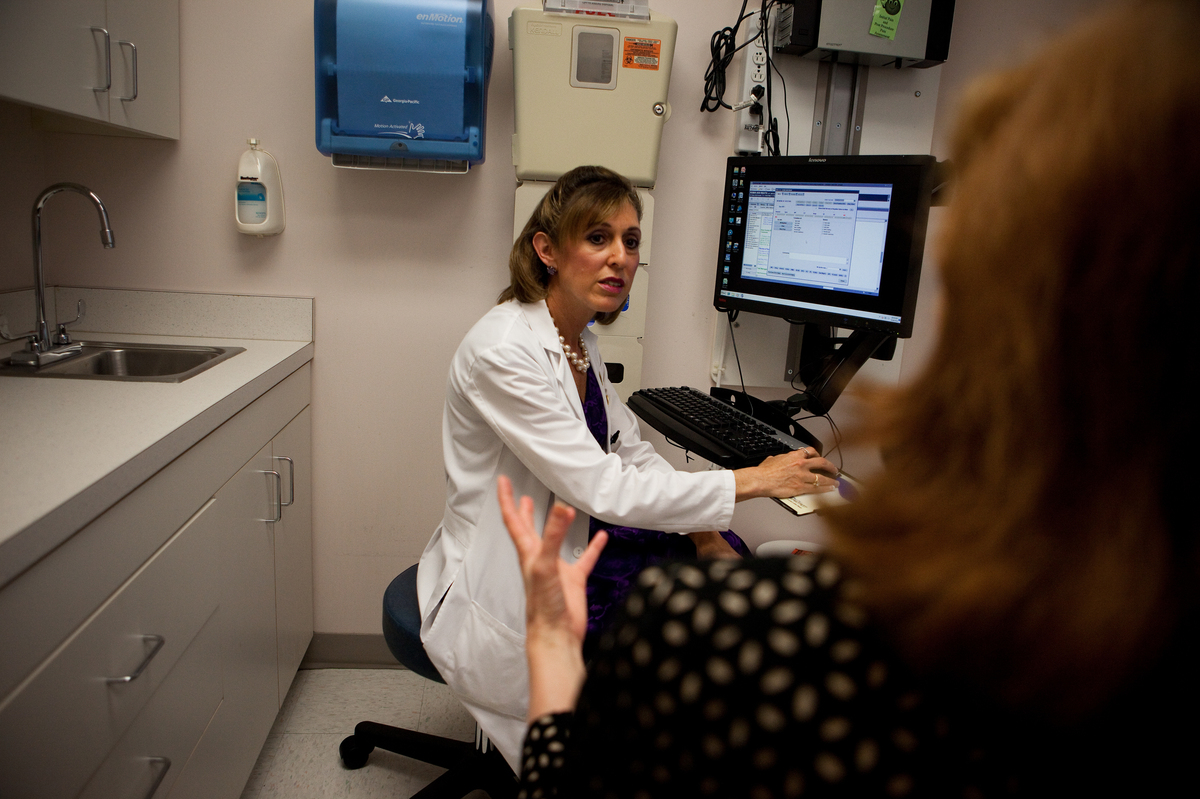 Robin Reath was getting a routine checkup recently when her doctor brought up something new about cervical cancer screening.

"We might be doing something a little bit different than what we've been doing in the past when we've screened you," said Dr. Andrea Singer, an internist at the MedStar Georgetown University Hospital in Washington.

For years, doctors have been using the Pap smear to screen for cervical cancer. The Pap involves swabbing some cells from a woman's cervix to examine them for any signs of abnormalities. It's credited with a steep decline in the number of cases of cervical cancer in the United States — and a drop in deaths from the disease.

"Now ... the sort of new thinking is ... actually looking at just doing HPV testing — so just looking for the virus," Singer explained to Reath, referring to the human papilloma virus, the primary cause of cervical cancer.

Reath, who also works at Georgetown's hospital, told Singer she'd heard something about the new test, but didn't really understand what it meant for her own health.

What it means for Reath — and for all women these days — is the subject of an intense debate.

The Food and Drug Administration recently approved an HPV test for use as a primary screening tool for cervical cancer.

"If we can detect either the risk or early disease much earlier on, then we should have many [fewer] women ultimately getting cervical cancer," says Paul Brown, who heads the company. "And that's, of course, the holy grail."

But not everyone's so sure. One concern is that while many women have HPV, only some of them will get cervical cancer. 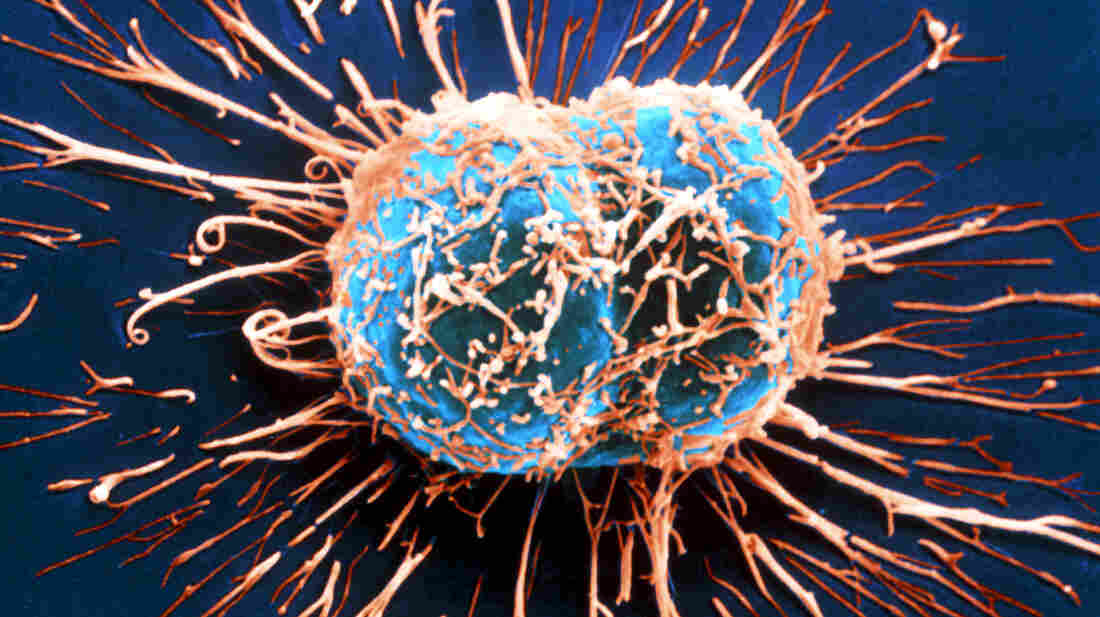 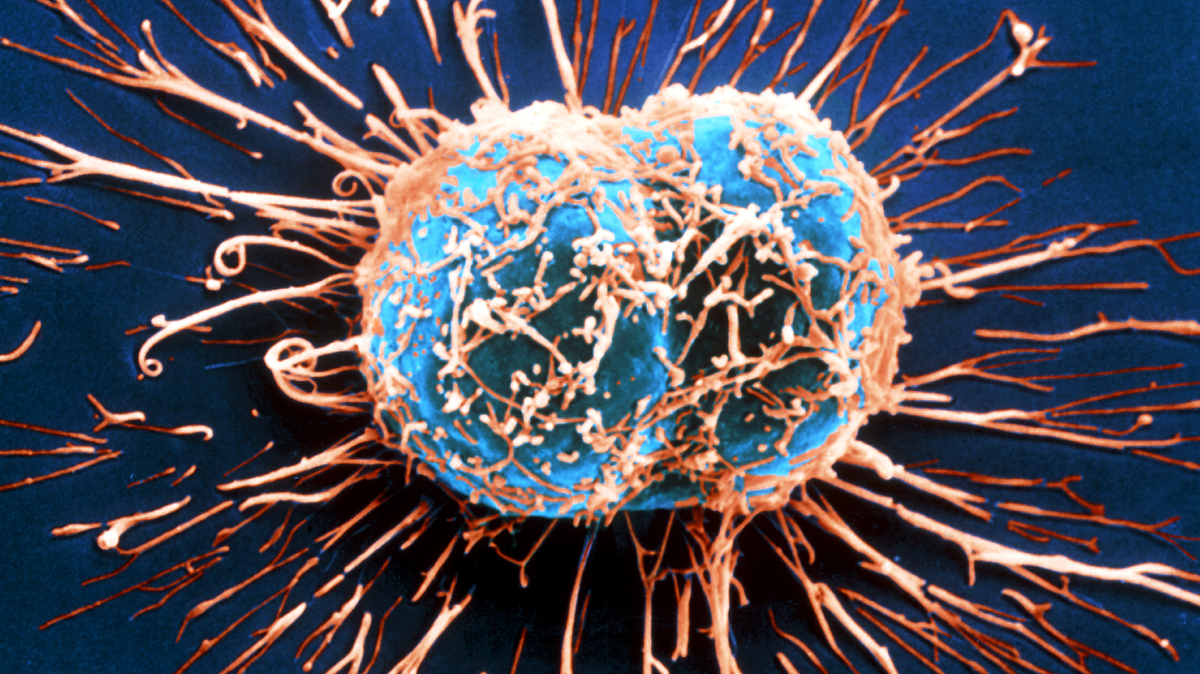 Two cervical cancer cells divide in this image from a scanning electron microscope.

"Like a cold virus, everyone gets it," says Susan Wood, a women's health policy analyst at George Washington University. "It comes and it goes. It's only if the virus happens to stay around for a period of years that it is associated with the precancerous conditions which — if not treated — could go on to become cancer."

So, screening everyone for the virus will end up scaring a lot of women for no reason, Wood says. In addition, it could lead to many women going on to get unnecessary follow-up tests, including a procedure known as a colposcopy.

That procedure, which uses a magnifying device and a mildly acidic wash to take a close look at highlighted cells of the cervix, is "somewhat expensive, somewhat painful and can result in finding abnormalities that may result in biopsies that can actually cause real harm to the woman," says Diana Zuckerman of the Cancer Prevention and Treatment Fund, a Washington-based advocacy group. Biopsies, for example, can increase a woman's risk for preterm deliveries.

In addition, a small minority of cervical cancers are not caused by HPV, Zuckerman says, raising the possibility that HPV screening would miss women at risk for those.

But Roche and some other experts disagree. They point to a study the company sponsored that involved more than 47,000 women. The results clearly showed the advantages of HPV testing, Brown says.

We were able to show that 1 in 10 women who were clear by a normal Pap test had already got pre-cancer, so ... as good as a normal Pap is, it does miss disease that you can pick up and detect with an HPV test.

"What we were able to show was that 1 in 10 women who were clear by a normal Pap test had already got pre-cancer," Brown says. "So it just drives home the point that, you know, as good as a normal Pap is, it does miss disease that you can pick up and detect with an HPV test."

Amid the debate, many doctors are trying to decide whether to use the test and how.

"Although there [have] been a lot of people very aggressive at the extremes of the issue, like with most controversies the truth is in between," says Dr. David Chelmow of Virginia Commonwealth University. "I don't think there is any huge problem with this. I don't as yet see huge advantages compared to what we're currently doing."

For her part, Reath is looking forward to trying the new test.

"You always kind of wonder ... 'Do they see everything?' " says Reath. A test that's more specific, she says, makes her feel more "like they're going to be looking exactly for what could cause cervical cancer."

To help doctors and patients sort all this out, the Society for Gynecologic Oncology and the American Society for Colposcopy and Cervical Pathology are leading the effort to develop interim guidelines for how to use the HPV test for cervical cancer screening. Those guidelines, the groups say, could come as early as this summer.