Accessibility links
Tiny Magnetic Beads Help Tame Severe Reflux For Some People : Shots - Health News Lots of people have heartburn or gastric reflux, and not all of them are helped by medications. A surgical device may help people with severe symptoms, but it hasn't been tested long term. 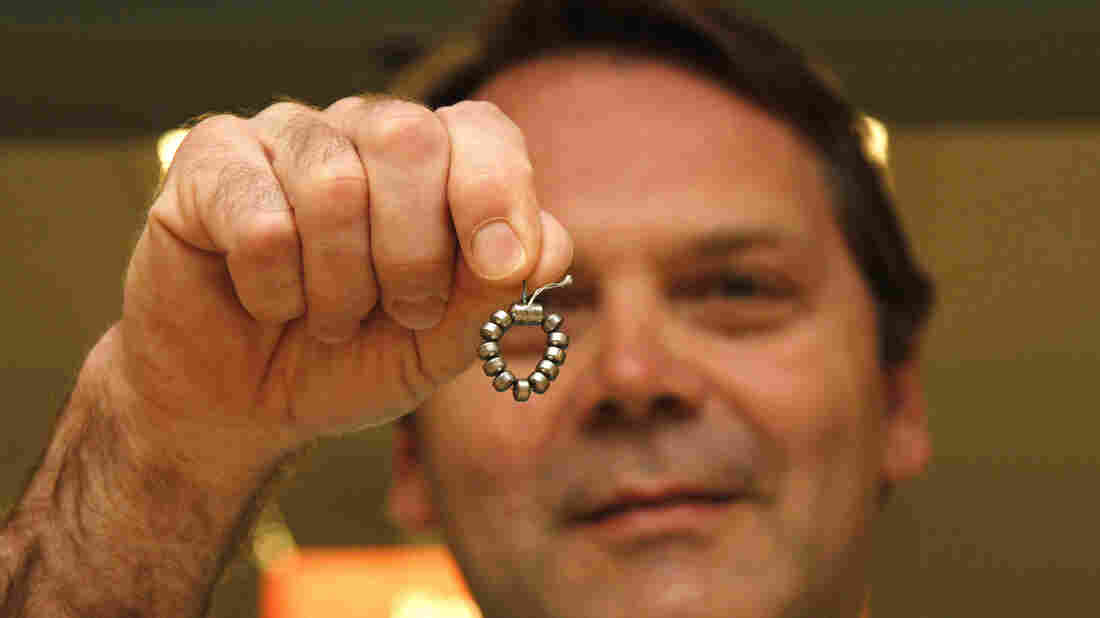 Dr. Ted Trus holds a magnetic ring of beads called a LINX. It has been approved by the Food and Drug Administration for people who aren't helped by medications. Herb Swanson for NPR hide caption 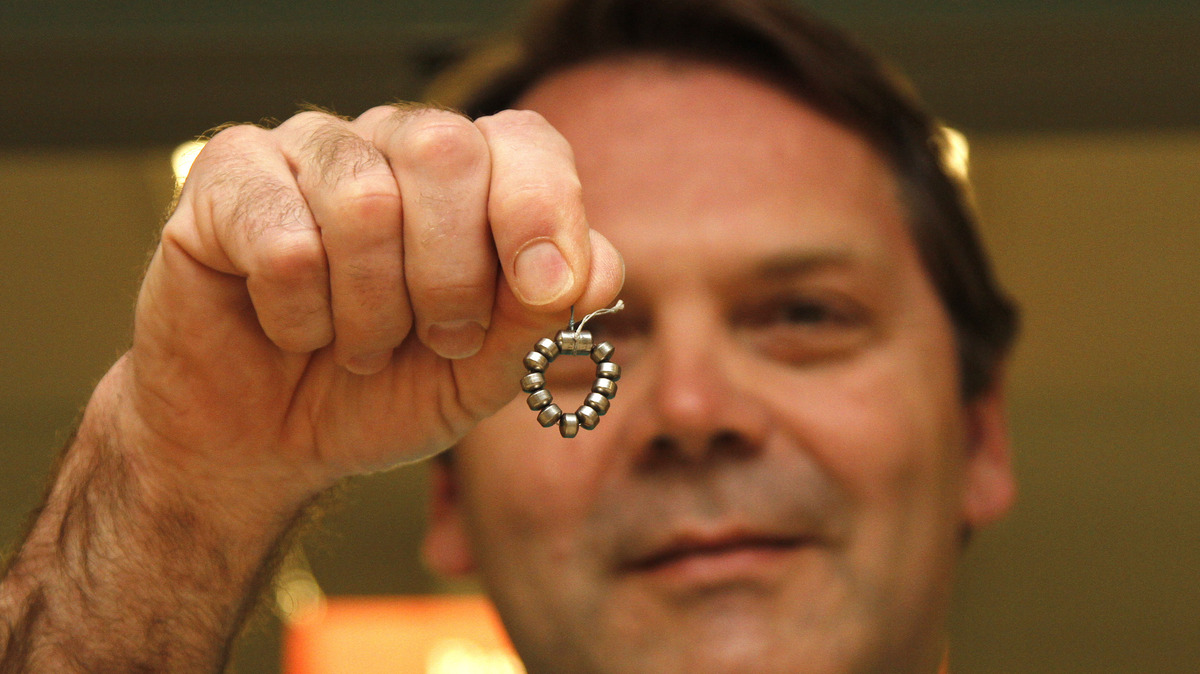 Dr. Ted Trus holds a magnetic ring of beads called a LINX. It has been approved by the Food and Drug Administration for people who aren't helped by medications.

Call it what you will — acid reflux, gastroesophageal reflux disease, or just plain heartburn. About 1 in 5 Americans suffer symptoms each week. They spend $10 billion a year on medication to relieve those symptoms, including indigestion, chest pain and difficulty breathing. Some even get major surgery to cure this digestive disorder.

And it's becoming more common, with one study finding 30 percent increase in cases between 1995 and 2009. Dr. David Metz, a gastroenterologist at the University of Pennsylvania Health System, blames it partly on our frenetic fast-food culture, and on another epidemic.

"Obesity is really the underlying factor that is causing this increase in reflux that we are noticing," says Metz.

But not everyone with this condition is obese. Ralph Thomas of Arlington, Vt., is just a little overweight. He's a professional musician, so he often needs to eat after concerts. But late-night suppers became agony when acid reflux started serving up chest pain and breathing trouble. Thomas took fistfuls of over-the-counter antacid tablets. He even had to sleep sitting up to prevent an attack at night.

Acid reflux can be treated with major surgery that wraps the upper part of the stomach around the bottom of the esophagus to strengthen it. 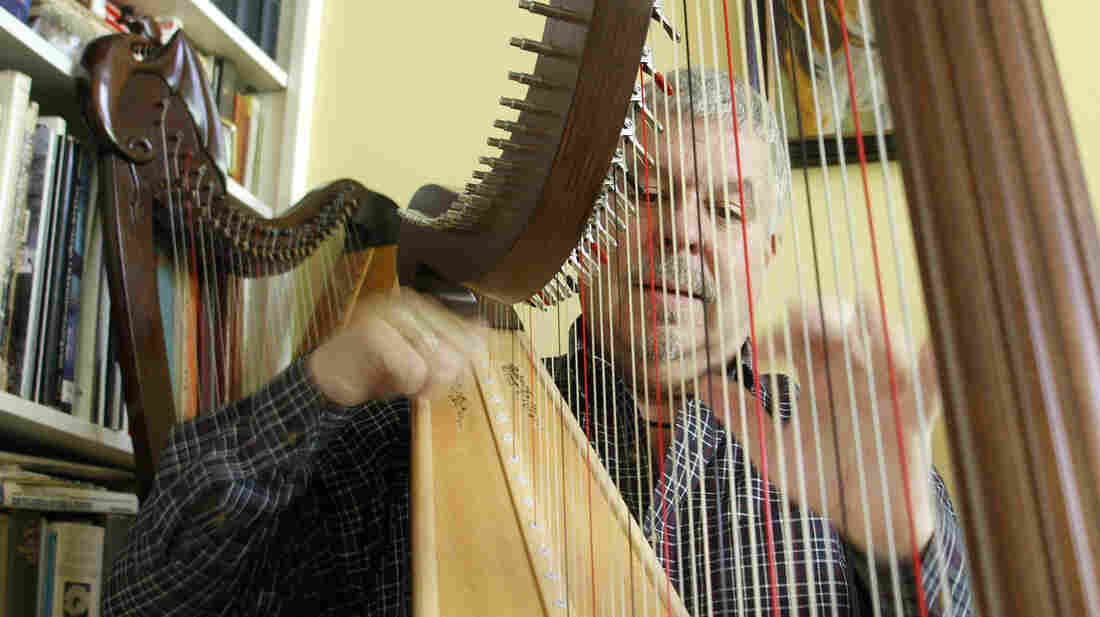 Ralph Thomas plays the harp at his house in Arlington, Vt. His reflux symptoms weren't controlled by medication, so he decided to have surgery to install a LINX device. Herb Swanson for NPR hide caption 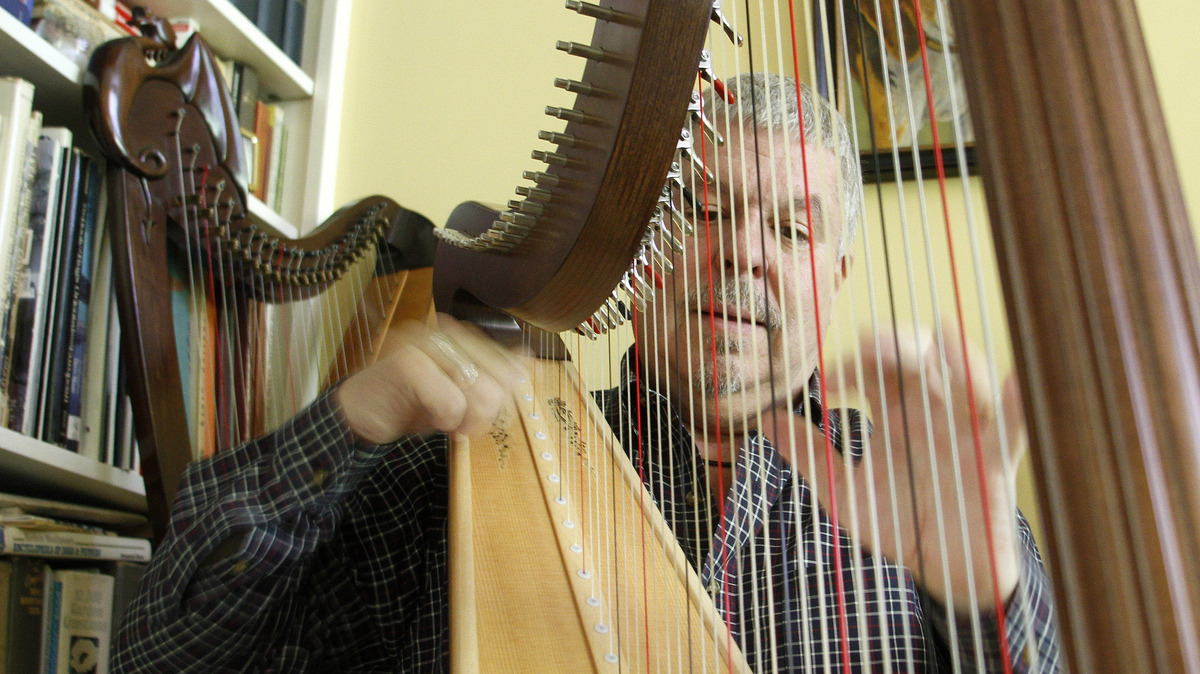 Ralph Thomas plays the harp at his house in Arlington, Vt. His reflux symptoms weren't controlled by medication, so he decided to have surgery to install a LINX device.

"No thanks," says Thomas. "That looked very invasive to me," he remembers thinking, after his doctor told him about the surgery, called fundoplication.

So Ted Trus, his doctor at Dartmouth-Hitchcock Medical Center in New Hampshire, showed him a small bracelet of magnetic beads, which he likes to roll around in his hand.

"So I'm holding a new device called a LINX device, which is an esophageal sphincter augmentation device," Trus explains at the hospital.

Trus says the beads cinch the lower esophagus like a little elastic belt, keeping food moving in the right direction.

Then food stays in the stomach, Trus says, "but it's still able to get down around the beads, because the beads will expand when you swallow, allow things to pass and then tighten up again to prevent things from coming back up."

A surgeon implants the bead band fairly easily — at least, that's how it worked for Thomas. "By 2:30 in the afternoon I was dismissed to go home," he recalls. "I had a cheeseburger on the way home with no fear of any pain. And since then it's just been like 20 years ago. I can eat anything at any time."

"Before, everything was a negotiation with everybody else. 'No, we can't go out for that type of food;' 'No, I can't eat now;' 'I've got to eat now because I'm not going to be able to eat then.' It's none of that. I can just go along with everybody else and be normal again." 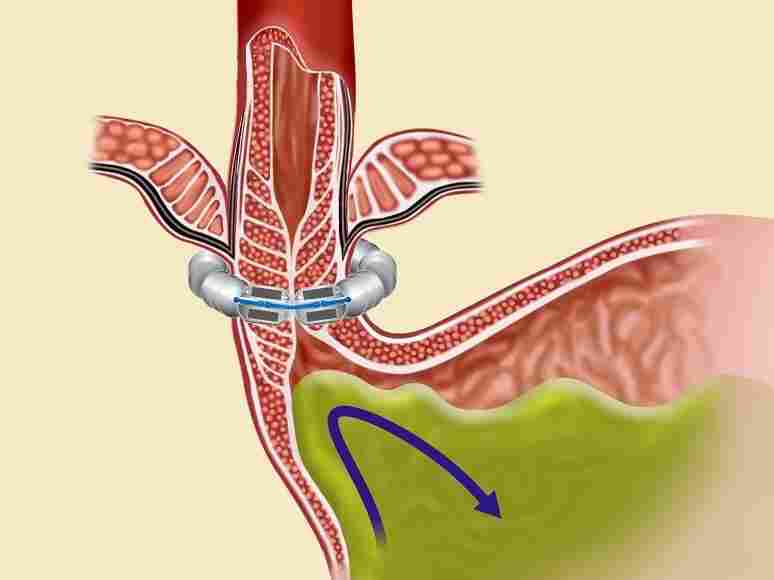 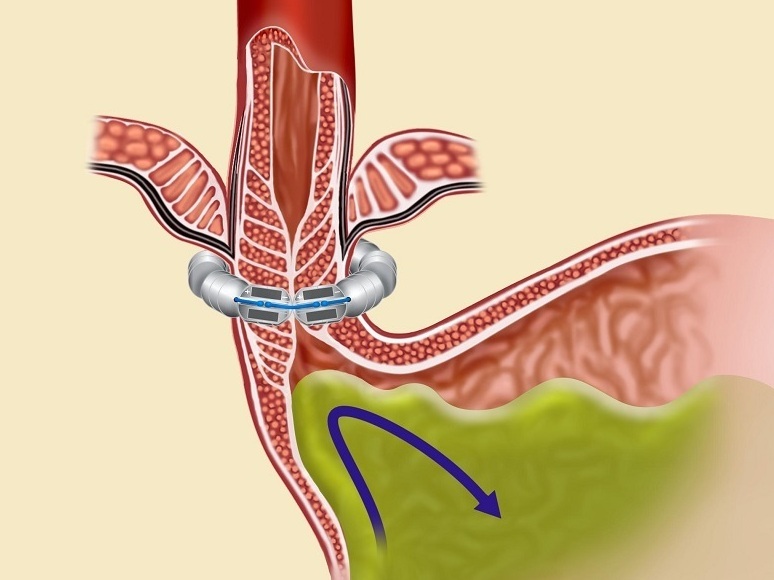 For him, "normal" means eating pretty much what he wants to eat, including spicy food, when he wants it.

Thomas was the first patient to have the procedure at Dartmouth-Hitchcock, which was the first hospital in northern New England to try it. He says heartburn made him so miserable, he didn't mind being a guinea pig.

Still, he knows that wrapping magnetic beads around his esophagus may not be risk-free. The procedure is still brand new. The FDA gave its approval only in 2012, after 100 patients in clinical studies showed good results.

And not all physicians are on board. Metz has decided not to use the LINX device with his patients because he thinks it's still unproven. Earlier mechanical devices have been known to fail. Some slipped out of place, causing pain. Others did not improve the ability of the esophagus to expand and contract. So they were taken off the market.

That's why Metz wants to see more long-range studies, to make sure the beads stay in place and do what they are supposed to do.

"I'm not knocking it, I'm just reserving judgment at this time," says Metz.

Reflux and similar disorders are notoriously difficult to diagnose correctly, Metz notes. He says that for the vast majority of patients who really do have it, medications, which include antacids, histamine antagonists and proton pump inhibitors, are enough to relieve symptoms.

Right now, the LINX beads are the only devices of their kind available, and Trus expects to keep using them with patients. But even he admits, "It's impossible to predict what will happen 10 years from now." So he says he will keep close watch on how patients do over time, looking for unexpected side effects.