Accessibility links
Are Pre-Existing Condition Bans For Health Insurance Still With Us? : Shots - Health News Contradictory letters from an insurer spur a health reporter to explore why the implementation of this key health law protection turns out to be more complicated than she thought.

Are Pre-Existing Condition Bans For Health Insurance Still With Us?

Are Pre-Existing Condition Bans For Health Insurance Still With Us? 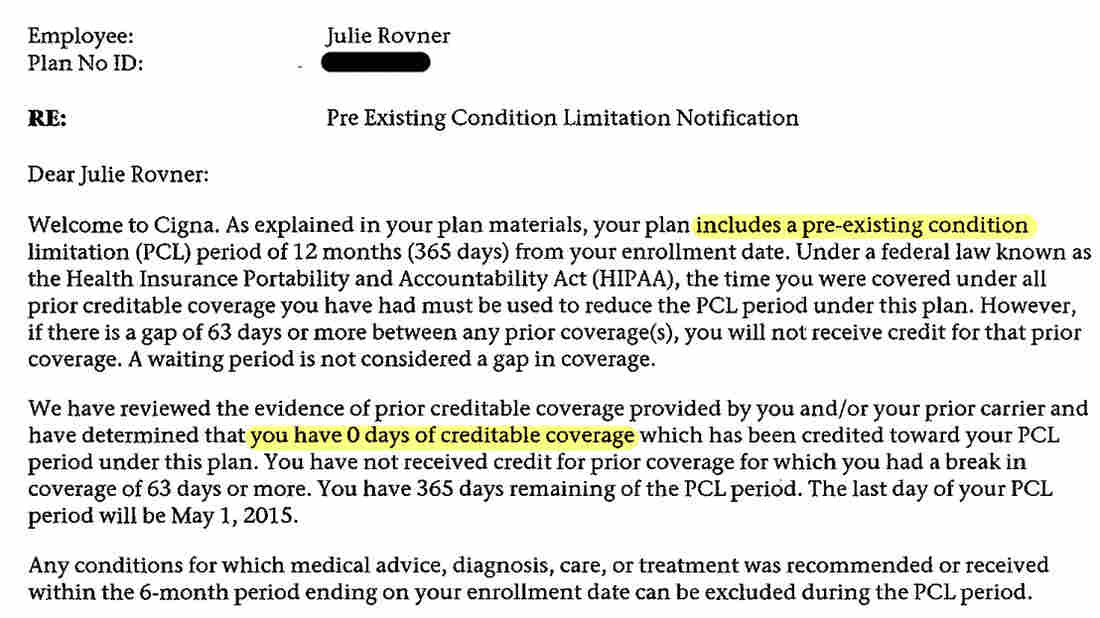 Cigna's letter to Julie Rovner saying she had no proof of past coverage, so limitations based on pre-existing conditions could apply. (Highlights added.) Julie Rovner for NPR hide caption 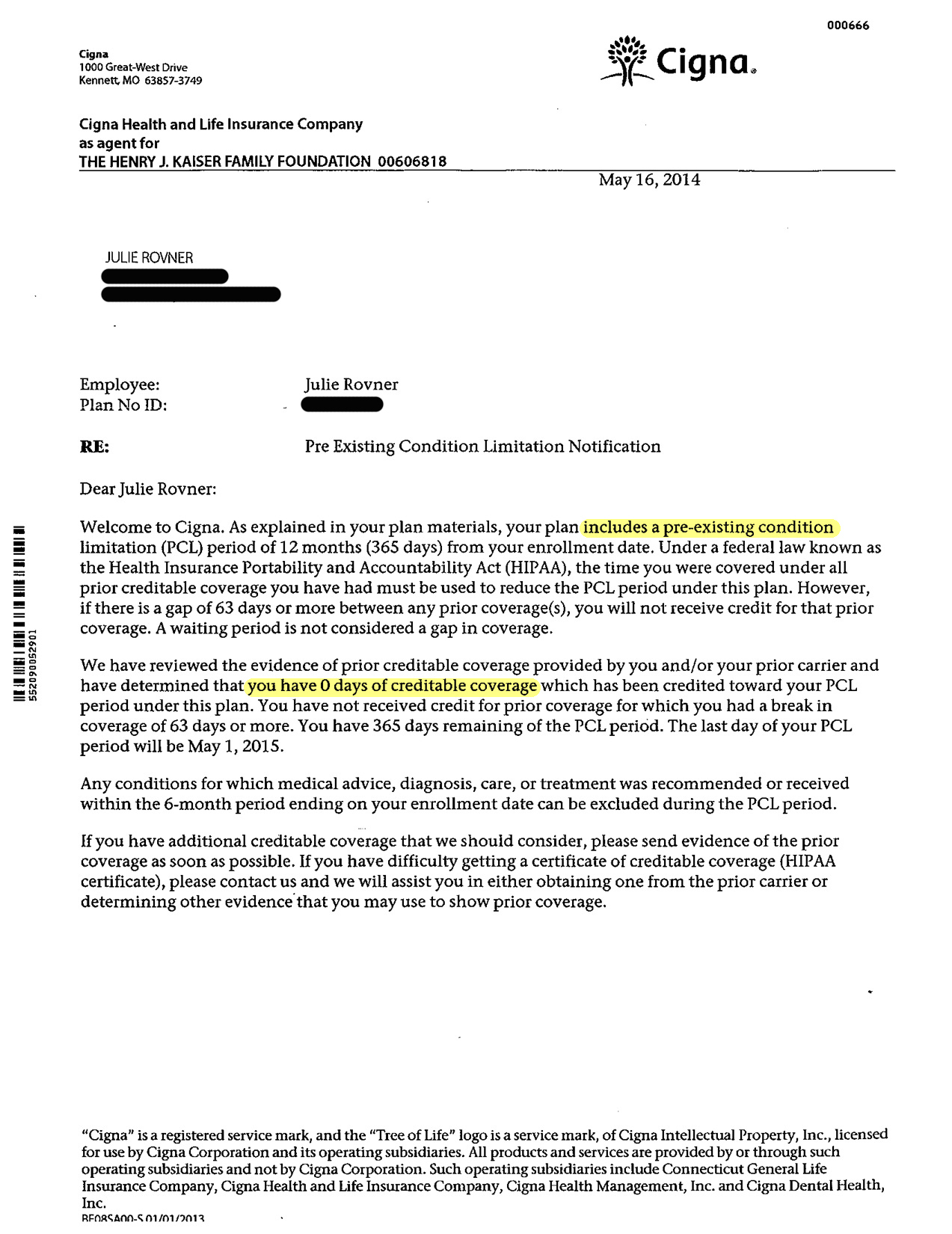 Cigna's letter to Julie Rovner saying she had no proof of past coverage, so limitations based on pre-existing conditions could apply. (Highlights added.)

"Welcome to Cigna," said the letter, dated May 16, on behalf of my new employer, the Kaiser Family Foundation. The letter also said the insurer was placing me on a one-year waiting period for any pre-existing conditions.

Seriously? Wasn't the health law supposed to end that?

So it was really odd that I received that notification the same day as another letter — also dated May 16 and also from Cigna — on behalf of my now-former employer, NPR. It was a "Certificate of Group Health Plan Coverage," noting that I had been covered continuously for at least the past 18 months — in other words, creditable coverage that prevents insurance companies from imposing limits on pre-existing conditions. (It's more like 10 years, but who's counting.) 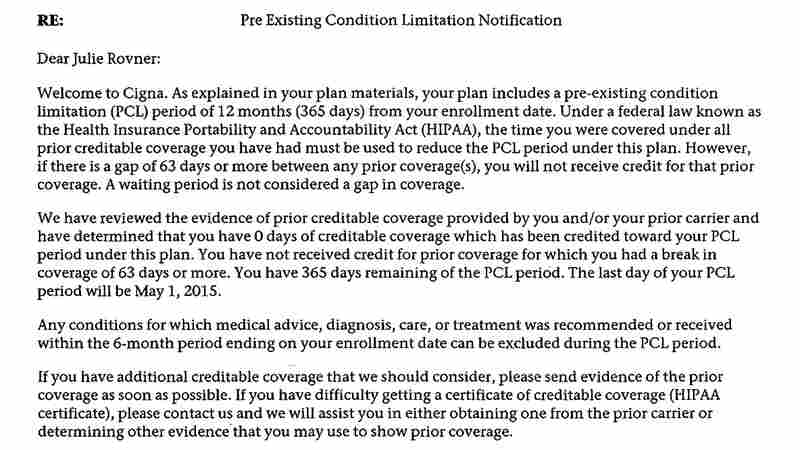 A second letter from Cigna to Julie Rovner provides proof of her past health coverage. Julie Rovner for NPR hide caption 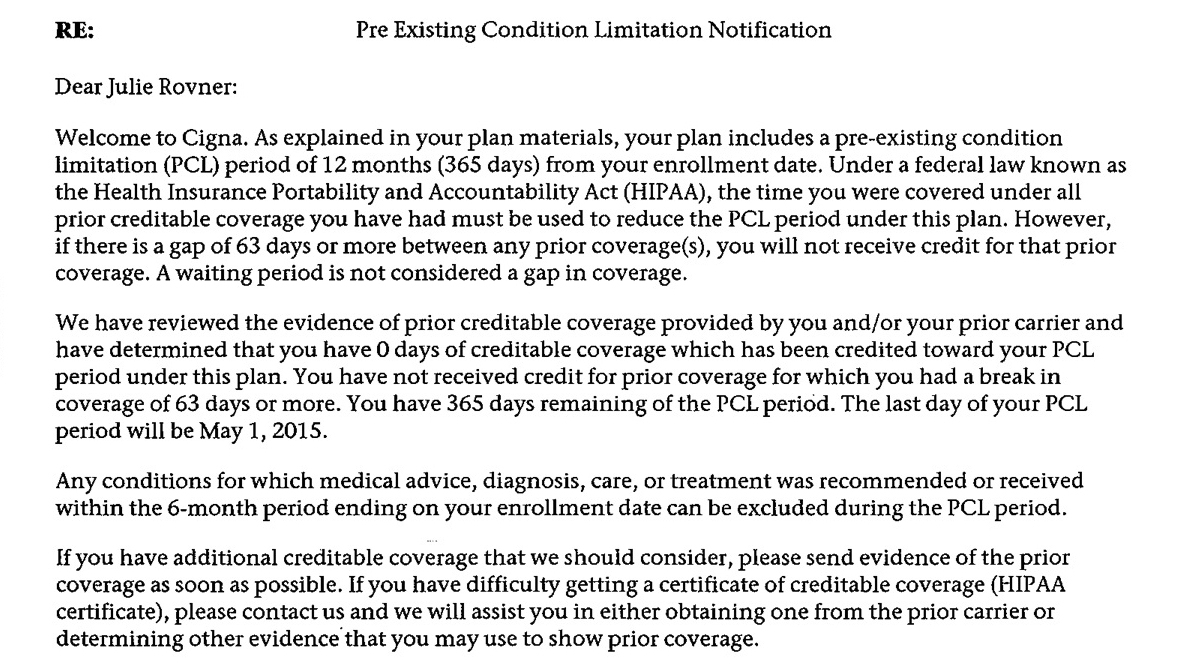 A second letter from Cigna to Julie Rovner provides proof of her past health coverage.

Now, as a health reporter, I knew the first letter was a mistake. I told Here & Now's Jeremy Hobson about what I found as I sorted it out.

First, the 1996 Health Insurance Portability and Accountability Act says that if you've had continuous coverage, meaning coverage without a break of more than 63 days, your new insurer may not impose a pre-existing condition waiting period.

But the mix-up raised a broader question: What about the requirement of the Affordable Care Act that prohibited pretty much all pre-existing condition exclusions as of Jan. 1, 2014?

Under the law, the only plans that may continue to exclude coverage for pre-existing conditions after that date are individual plans that are "grandfathered," or haven't changed substantially since the law was passed in 2010.

It turns out that the Jan. 1 date wasn't quite as set in stone as many have thought. "It's more of a rolling plan year effective date," said a spokesman for the Department of Labor, meaning as plans renew in 2014, pre-existing condition exclusions will get dropped.

Indeed, a spokeswoman for Cigna confirmed that "for any particular group health plan, (the elimination of pre-existing condition exclusions) becomes effective on the first day of the 'plan year' that begins on and after January 1, 2014." By the end of 2014, the spokeswoman said, the requirement to eliminate pre-existing condition exclusions "will have become effective for all plans." And yes, the plan year for my new employer, the Kaiser Family Foundation, had begun before Jan. 1.

But what happens to a person who does have a break in coverage and gets a one-year exclusion in May but whose employer's plan renews in September? Does that person get stuck waiting the full year until the next May for the exclusion to end?

Nope, says the Labor Department spokesman. When the plan drops the pre-existing condition exclusion, it goes away completely, including for those who it may be affecting at the time.

But that won't include me. A very polite Cigna customer service agent told me that I got the contradictory letters because two company computer systems "can't talk to each other." So my mix-up has been fixed. Meanwhile, if you're changing insurance and you see something that doesn't look right, check with your HR department or the insurance company.