Accessibility links
The Health Data Revolution Enters An Awkward Adolescence : Shots - Health News Huge amounts of information about your health, your doctor and your hospital lurk in private and public databases. But putting that information to work to improve health care remains a challenge. 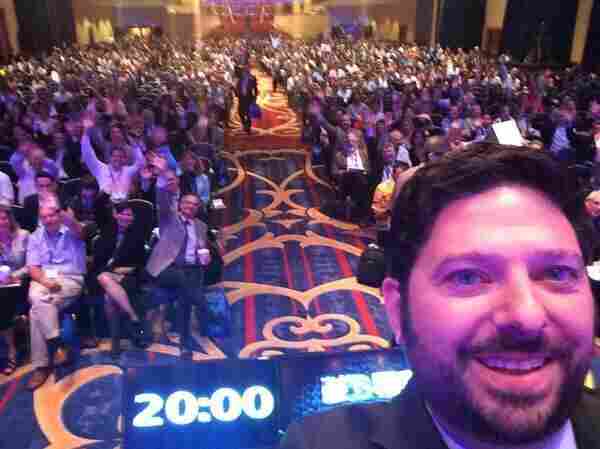 The crowd in a hotel ballroom in Washington, D.C., was rocking on Monday, the 2,000 people shrieking with excitement over federal health-care databases. That could only happen at Health Datapalooza, the annual summit for data geeks, doctors, researchers and patients who want to use data to transform health care — or at least make a buck.

Both of those goals are proving to demand a lot more than just coming up with a nifty API and getting the venture capitalists to buy in.

Speakers at the Datapalooza gave plenty of examples of how people are trying to use data to make medical care safer, swifter and less expensive. But almost all of these projects are still works in progress.

The Open FDA database unveiled at the conference, for one, is intended to make it easier for the public to search more than 3 million reports on adverse reactions to prescription drugs. Up till now, the information was available by reading quarterly reports, by filing a Freedom of Information Act request or by combing through the raw data. Any improvement would be a help for those of us not adept with relational databases.

That kind of data is "lazy data," Secretary of Health and Human Services Kathleen Sebelius told the Datapaloozers on Tuesday; data that is locked away or difficult to access. "HHS is converting lazy data and making it active data," Sebelius said.

Still, the Food and Drug Administration is up front about saying that Open FDA is a beta launch, and that the agency is counting on software developers outside the federal government to come up with applications that will make it truly useful.

There was chatter about how journalists are mining newly released federal Medicare data to compare what doctors and hospitals charge around the nation, revealing huge variations in costs for the same procedure. That includes this ProPublica report, produced in partnership with NPR.

Still, health apps have failed to reach the level of popularity and financial success that we've seen with apps for weather and geolocation, says Josh Rosenthal, chief scientific officer of RowdMap, a Web-based business management platform. He told participants in an entrepreneur's boot camp session: "Put it all together and you get a big bucket of fail."

Maybe that's because the potential customers for that data are so varied, as is the data itself, whether it's individual health records, exercise tracking, hospital billing codes or medications with safety problems. Questions about who wants the data, what they want to do with it and who will pay for it remain largely unanswered.

"I want smarter ways to screen for, treat and prevent cancer," Andrea Downing, a breast cancer "previvor" who blogs as Brave Bosom, said at Datapalooza. She says she recently found out that the specific mutation on the BRCA gene that caused her cancer is a C61G. "What does that mean? What can we do to band together and ask smart questions about ourselves?"

But for many people, Downing says, that's more than they want to know about their health. "My challenge is to get my community to be passionate about the data," she said, "to understand the meaning and purpose of the data. They care about what's practical for them."