Accessibility links
Head Injury Risk Rose In Cities After Bike-Sharing Rolled Out : Shots - Health News When you rent a bike, you usually have to bring your own helmet or go without one. If you ride with your hair flapping in the breeze, your risk for a brain injury goes up.

Head Injury Risk Rose In Cities After Bike-Sharing Rolled Out

Head Injury Risk Rose In Cities After Bike-Sharing Rolled Out

Why do some bike-share riders skip helmets?

Back in 2012, we asked some bicyclists in Washington, D.C., about their helmet habits. Here's what they told us.

Editors' Note: This post has been revised to clarify and correct reporting on the findings of the bike helmet study. The researchers looked at head injuries, not just brain injuries, so the descriptions have been changed to head injuries throughout. The lead researcher said in response to follow-up questions that the study was designed to look at the risk of head injuries as a proportion of all injuries related to bicycling, so the headline and descriptions of the work have been changed to reflect that distinction. Finally, the researchers are preparing a postscript to their study and said they will submit it to the American Journal of Public Health to address concerns raised after the paper went into production.

Bike-sharing is taking cities by storm.

Rental stations across town give people a quick way to get around — and get some exercise. 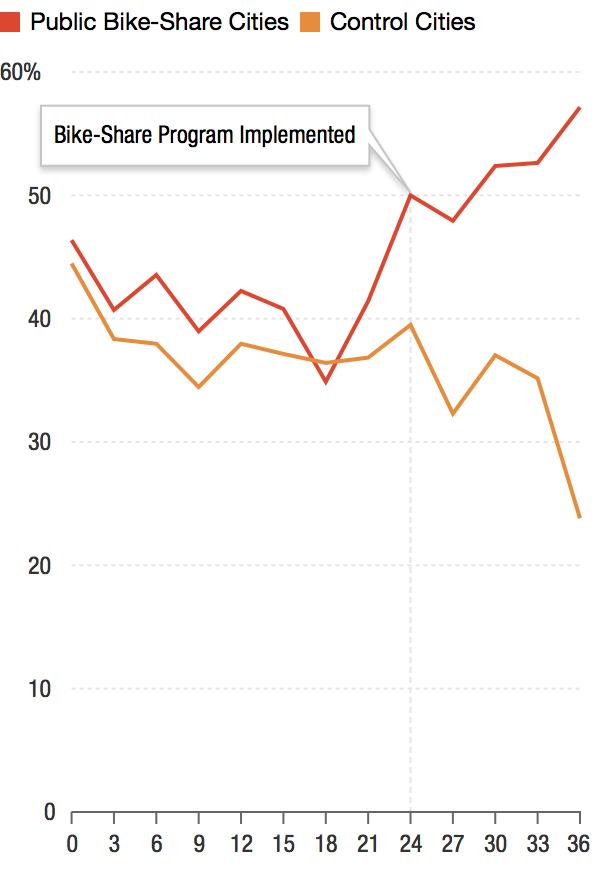 But there's a catch.

When you pick up a bike, you usually have to bring your own helmet or go without one. If you ride with your hair flapping in the breeze, your risk for head injury goes up.

A group of Canadian and American researchers wondered what effect bike-share systems had on the likelihood of bicycle-related head injuries. And they came up with a way to look at the potential problem.

They analyzed data on the treatment of serious head injuries at trauma centers in five cities before and after bike-sharing programs were started. The data were lumped together for Montreal, Washington, D.C., Minneapolis, Boston and Miami Beach, Fla. For comparison, the researchers also looked at five cities that didn't have bike-sharing during the study period, including Milwaukee and Seattle.

"The study basically confirmed our worries," says Janessa Graves, who works on pediatric injury prevention at Washington State University's nursing school in Spokane. She's the lead author of the study, published online Thursday by the American Journal of Public Health. "Public bike-share initiatives are great wellness initiatives," she tells Shots. "But without providing helmets, we were concerned that we would see an increase in [the risk for] head injuries. And we did."

Now, a study like this one can't prove cause and effect. Other factors that might have been missed by the researchers could have been at work. The researchers didn't have information on individual patients and don't know whether the people who were hurt in bike-share cities were actually using bikes they rented. Also, a bump seen in the graph showing the proportion of head injuries before the launch of bike-share programs might be a sign of problems with the data. The study also wasn't able to evaluate the changes in ridership over time, so the absolute number of injuries couldn't be used as a reliable outcome measure in the paper.

Even so, the results seem to add up.

"Certainly the data are solid enough that we need to look more carefully at these kinds of programs," says Andrea Gielin, director of the Johns Hopkins Center for Injury Research and Policy. "I think it's an important study that raises some concerns that we need to pay attention to." She wasn't involved in the research.

"When we're trying to promote more bicycling," Gielen says, "we need to do that in the context of increasing helmet use."