Accessibility links
Cancer When You're Young Isn't Always 'The Fault In Our Stars' : Shots - Health News We asked teenagers and young adults if the movie gets close to the reality of living through cancer. They said the loneliness, yes. The Hollywood hair, not so much. 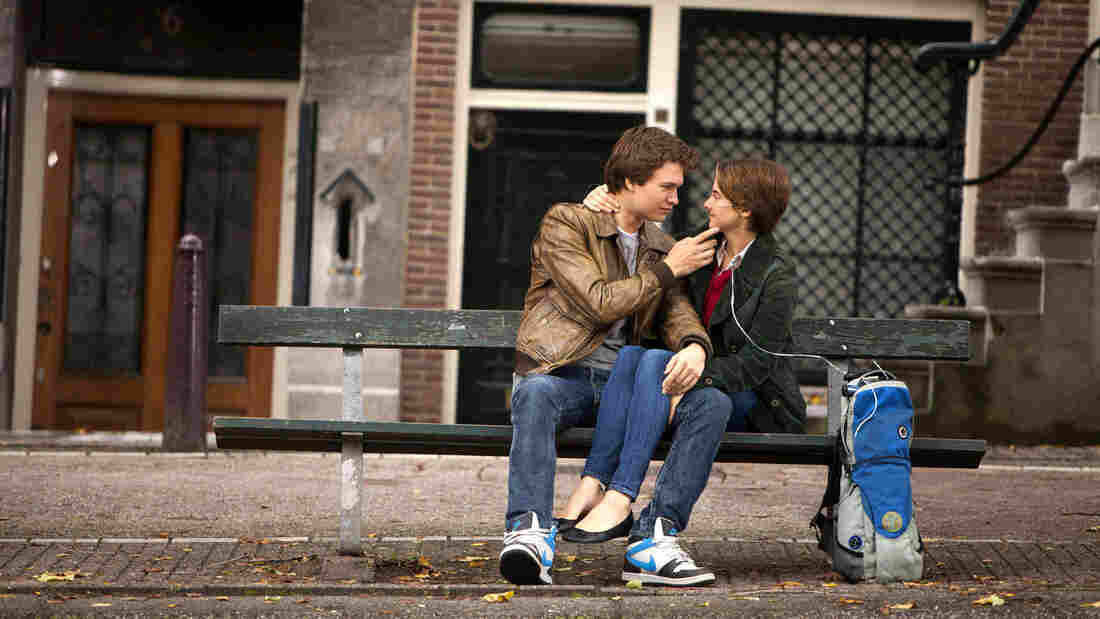 In The Fault in Our Stars, Gus and Hazel, played by Ansel Elgort and Shailene Woodley, play two teenagers with cancer. James Bridges/AP hide caption 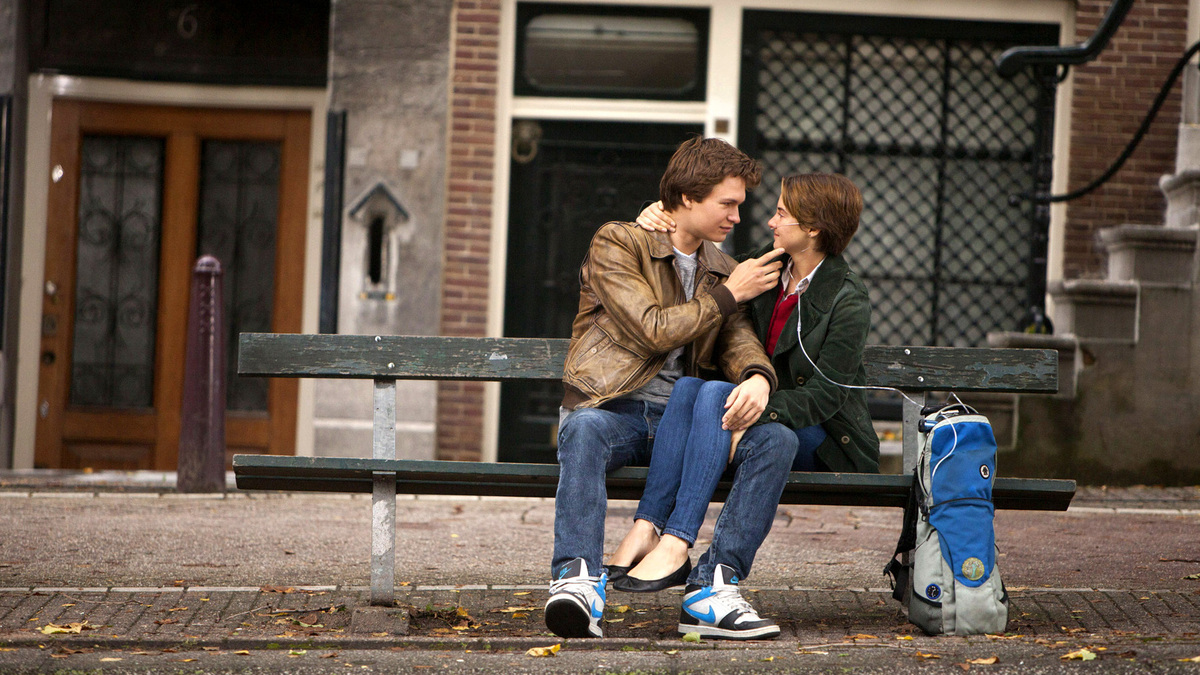 In The Fault in Our Stars, Gus and Hazel, played by Ansel Elgort and Shailene Woodley, play two teenagers with cancer.

It's hard not to be charmed by Hazel and Gus, the flippant yet noble teenagers with cancer in the hit film The Fault in Our Stars. But movies have a bad habit of taking life-or-death health crises and turning them into cliché.

To find out if The Fault in Our Stars stayed true, we called on the experts – people who have had cancer as teenagers and young adults. Not surprisingly, most of them have read the book and seen the movie.

So is the movie version of cancer anything like in cancer real life?

Katherine: I was thought they might make it really cancery and overdramatic – have giant bags of chemo everywhere. But they didn't. I felt good about that, actually. My nurses had to tell me in order to get me sign the papers to start chemo, 'If you're thinking it's like what you see on TV, that's not it.' I had this warped perception of how the chemotherapy would affect me. I don't want other people to feel that way.

Sammy: My main criticism of the movie is that they don't look sick. It's great that Hazel has the nasal cannula and Gus learned to walk like someone with an amputation. I know someone with that same amputation and he walks just like that. But she wouldn't look to put together all the time.

Hazel and Gus joke about "cancer perks" and the "stereotypical Disney wish." Did you get those? 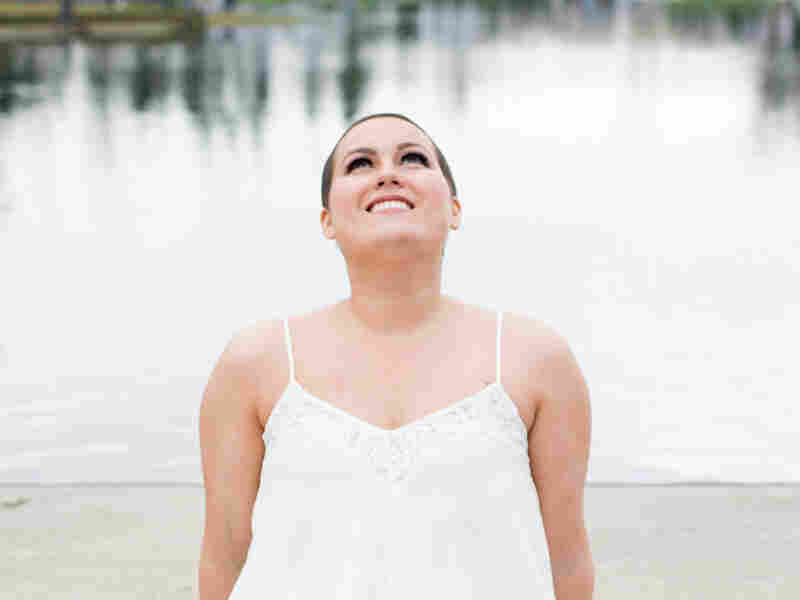 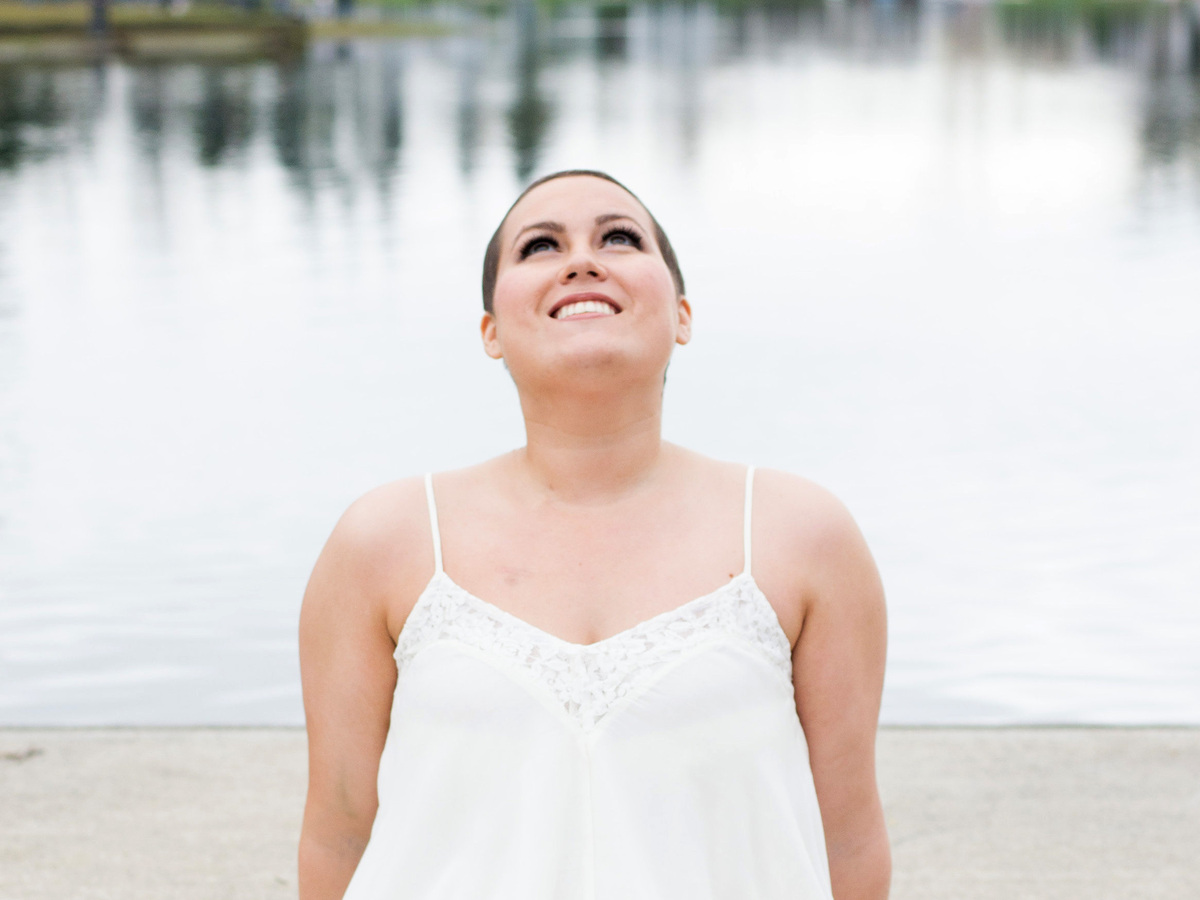 Katherine Payment is looking forward to moving to Los Angeles for her first job.

Sammy: I almost did have my stereotypical Disney wish! When you have a cancer diagnosis you get to make a wish right away. When they asked me I didn't feel sick yet; I felt like I kind of didn't deserve a wish. So I asked to go to Orlando. Fortunately, that wasn't my final wish. My wish was to be stage manager for the day for "The Lion King" on Broadway. It was incredible, oh my gosh! I had worked in theater a lot in middle school and high school. It was incredible to see what it took to do a show on Broadway.

Loneliness is a real theme for Hazel, the idea that she's so isolated from regular teenage life. Did that happen to you?

Allison: You feel alone. In the movie and the book they meet with other cancer patients. I've never met other people my age going through this. It's really hard to find people to relate to.

Heather: Your parents are just waiting hand and foot on you, but that's not really the kind of connection or social interaction that you're needing and craving at that point.

It affected friendships dramatically; you're just starting life and you're facing the reality that life might be ending. That's something that I think most 18-year-olds aren't equipped to cope with. Most of my friends went off to college and life went on for them, and my life was on pause. That was a tough pill to swallow. I did have a few friends who called and texted and that was great. But it was really lonely.

I was treated at a children's hospital the same way Hazel was; I could connect with that. When you're 18 you can't have a good conversation with a 3-year-old girl. It's good for the heart, but not the head.

In the movie, the parents struggle with Hazel's illness and the thought of her death. Did that worry you?

Sammy: I never worried too much that I was going to die, because I had pretty good odds. But when I did worry about it, I thought about what would happen to my parents, and the burden that you feel you put on your family. You consume all of family life because there's so much going on with you. 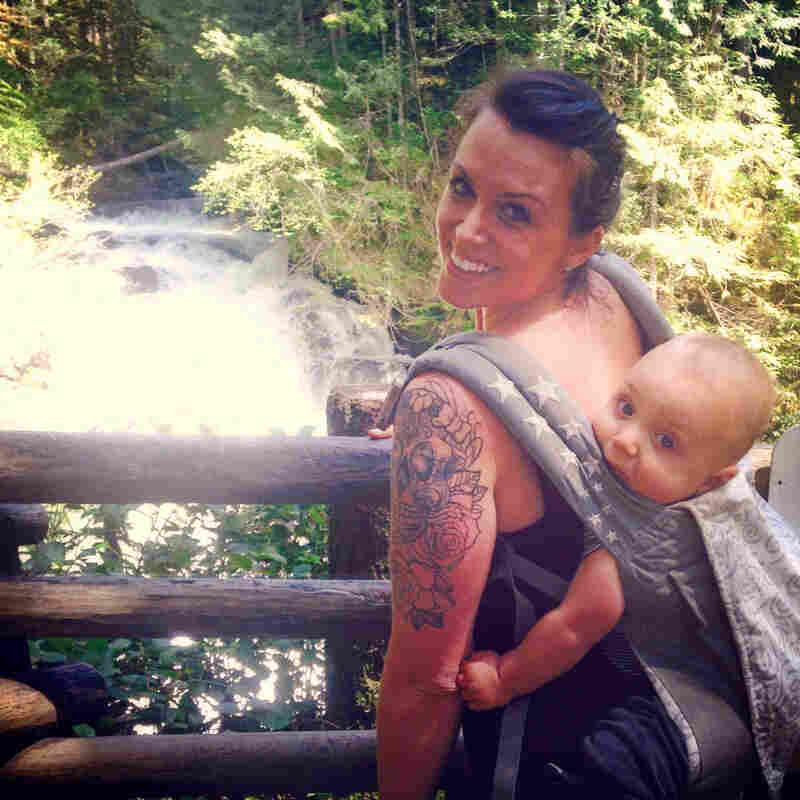 Heather Wick is now 26 and married, shown her with her son, Danny. Courtesy of Heather Wick hide caption 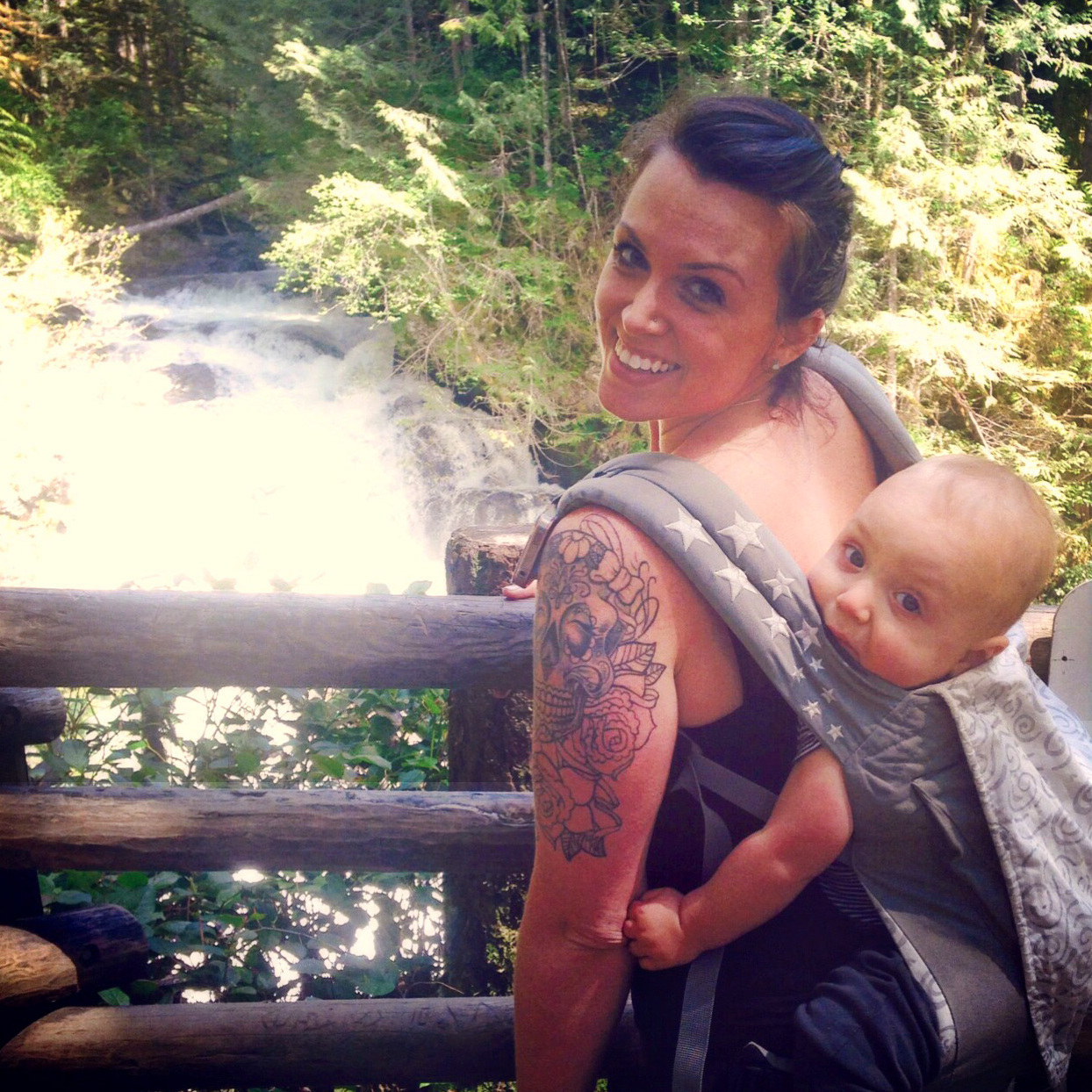 Heather Wick is now 26 and married, shown her with her son, Danny.

Allison: I find it hard to talk to my mom. It's hard on her. It's almost better to keep it to yourself, but then it gets hard. That's where you feel the isolation. That's what happens in the movie. Her parents get all scared.

Let's talk hair. Did it bother you that Hazel made it through the movie with a full head of hair?

Heather: There were no typical cancer patients who were bald. Maybe if one or two of the people in the support group had lost their hair and the movie touched on that, it would have been better.

Sammy: Shailene Woodley's hair was always perfect. The description in the book that John Green has is very similar to what Esther Earl (a teenage cancer patient that Green knew) looked like. Having watched her videos and knowing how much she struggled, it doesn't give the full picture.

Heather: I was diagnosed five days before my high school graduation. I had super long hair; losing that was difficult.

Allison: In the beginning my hair was falling out in clumps. I went out and bought a wig. Then one day I woke up and it was growing back. Honestly, as a girl, hair was my biggest concern. I consider myself very lucky.

Do you think the movie will help teenagers and adults be better prepared for their own health crises?

Sammy: When I went to the movie it was mostly high school girls who were there. You could tell that the love story was why they were there. And that's fine. It's important to know that it's something that really happens to people and this is what the experience is like.

Katherine: I definitely related more to Hazel's approach than to Gus'. She was being very realistic about it. She has a disease where she knows that she's going to die eventually. She's on this drug that's keeping her alive, and they don't know how long it's going to keep working for her. She's prepared to die at almost any moment. That's more how I looked at it. I need to be OK with dying for me to get through every day, even though I have a much better prognosis than I think Hazel does.

Heather: I think I survived so I could help other people through their struggle. I survived. You can do it, too.

An earlier version of this story referred to Hodgkin's lymphoma as Hodgkin's leukemia.