Accessibility links
Doctors Aren't Sure How To Stop Africa's Deadliest Ebola Outbreak : Shots - Health News It started in February in West Africa. It has surged in the past few weeks, and now it has killed more than 300. The death toll is the highest of any outbreak since Ebola was detected in 1976. 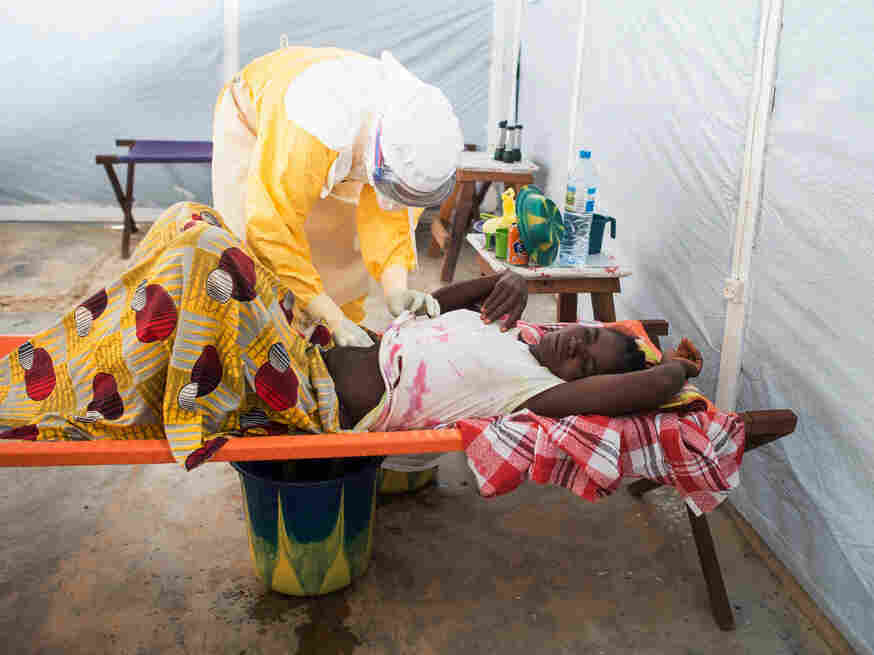 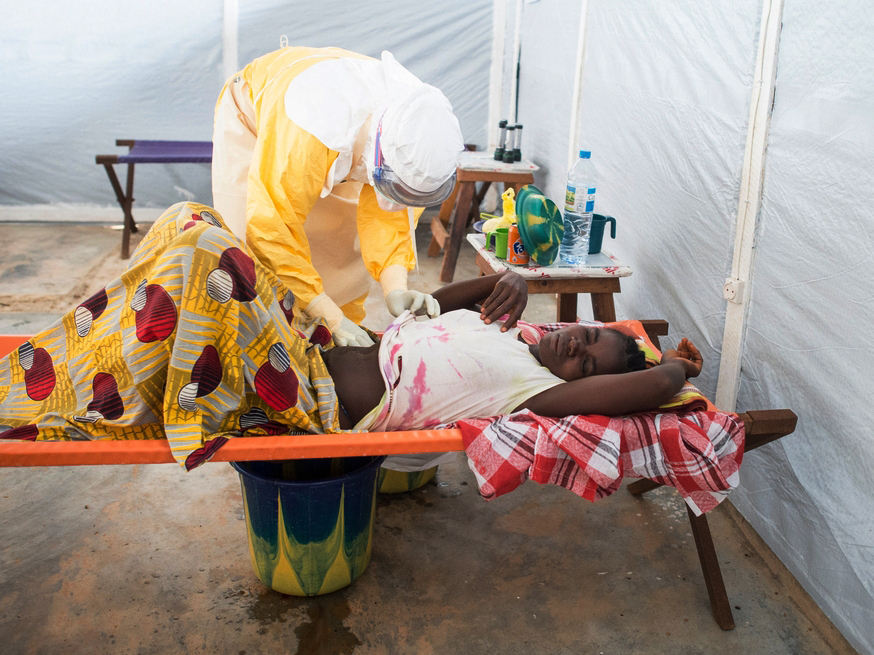 A health worker from Doctors Without Borders examines Ebola patient Finda Marie Kamano, 33, at her home in Conakry, Guinea, in April. The outbreak that began in February is still spreading in West Africa.

Sylvain Cherkaoui/Cosmos/Courtesy of Doctors Without Borders

When an Ebola outbreak lasts for months and continues to show up in new cities, health officials take notice.

That's exactly what's happening in West Africa. An outbreak that started in Guinea last February has surged in the past few weeks. It's now the deadliest outbreak since the virus was first detected in 1976.

More than 500 cases have been reported in three West African countries, and the death toll has risen to 337, the World Health Organization said Wednesday. That's up from 208 cases reported two weeks ago, a 60 percent spike.

"There are many villages in the eastern part of Sierra Leone that are basically devastated," virologist Robert Garry of Tulane University tells NPR's Jason Beaubien. "We walked into one village ... and we found 25 corpses. One house with seven people, all in one family, were dead.

"It's a very serious situation there," adds Garry, who just returned to the U.S. from West Africa. "This is about as bad as it [an Ebola outbreak] gets."

Ebola often kills around two-thirds of the people it infects. And it kills quickly, sometimes within days, sometimes within weeks. That actually makes outbreaks relatively easy to stop, says Thomas Geisbert of the University of Texas Medical Branch.

"Typically an outbreak starts in Central Africa," Geisbert says. "The WHO goes in and quarantines the area, and within a few months, they've contained the outbreak."

But the pattern is different in West Africa, Geisbert says. The virus continues to pop up in new locations. It has swept through Guinea, jumped across the border into Sierra Leone and, most recently, killed seven people in Liberia's capital, Monrovia — a dense metropolitan area with nearly a million people.

Why has Ebola been so hard to stop in West Africa? No one is sure, Geisbert says. But there are probably several issues.

This is the first outbreak in this part of Africa. The region isn't as well-equipped to handle Ebola as Central Africa, where the virus is more common.

Health officials still don't know how people are getting sick. In the past, people have caught Ebola from eating monkey meat or from bat bites. Then the virus spreads from person to person through bodily fluids.

Travel has become easier and easier in West Africa over the past few decades. So person-to-person transmission is a major concern.