Accessibility links
Shortage Of Saline Solution Has Hospitals On Edge : Shots - Health News Saline, used to clean wounds and treat dehydration, is a critical medical supply. But lately there hasn't been enough of it, and drugmakers say they won't be able to meet demand until next year. 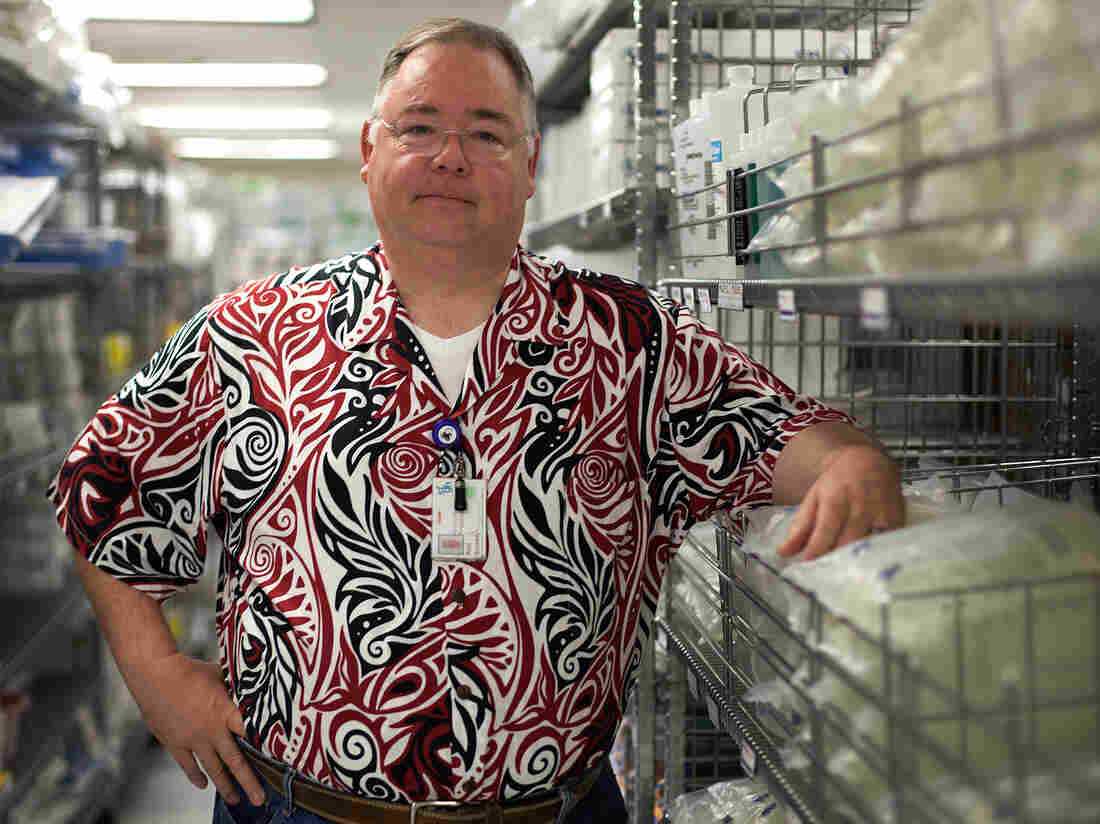 Reid Kennedy, materials manager at San Francisco General Hospital, stands next to racks of saline solution. He has had to carefully manage the hospital's supply of saline during this shortage. Mark Andrew Boyer/KQED hide caption 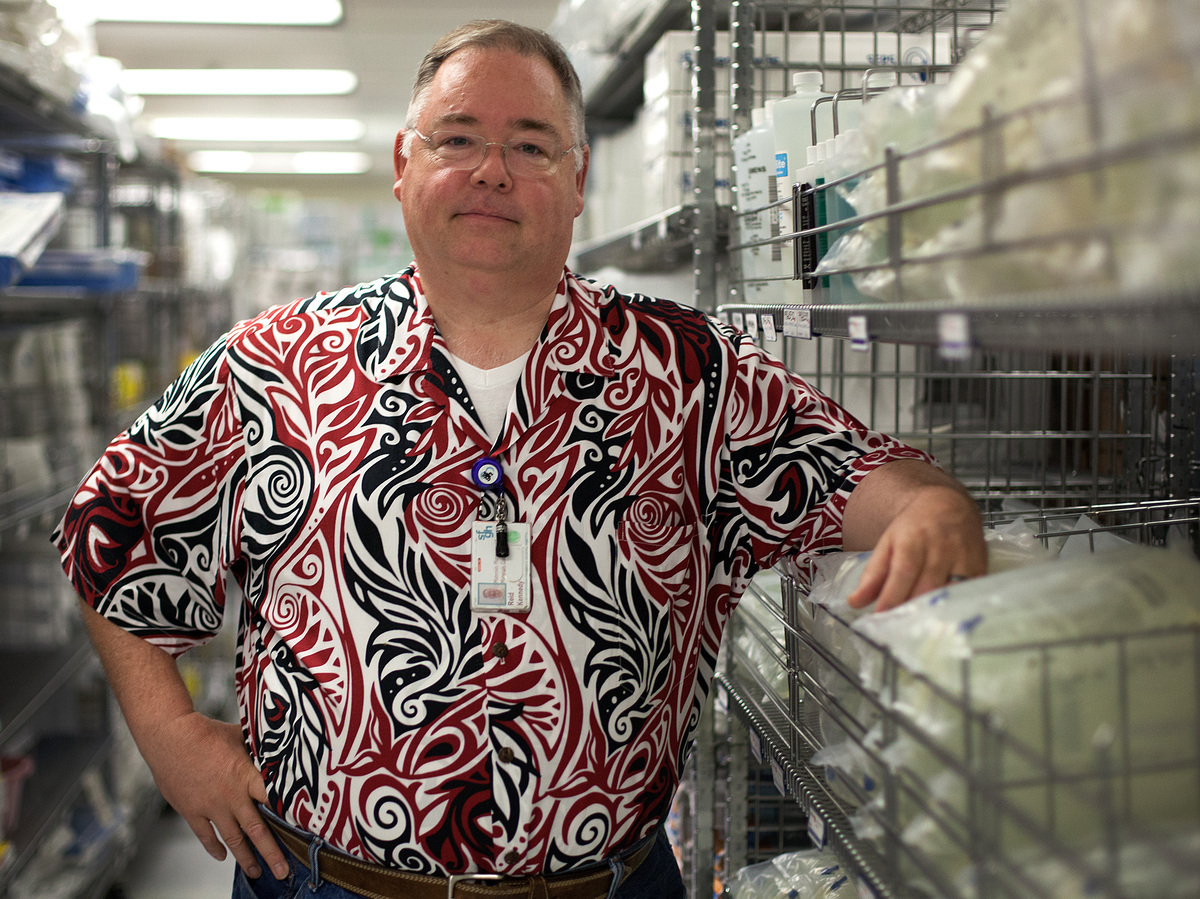 Reid Kennedy, materials manager at San Francisco General Hospital, stands next to racks of saline solution. He has had to carefully manage the hospital's supply of saline during this shortage.

Hospitals across the country are struggling with a shortage of one of their essential medical supplies.

Manufacturers are rationing saline solution — essentially pharmaceutical-grade saltwater. The stuff is used all around hospitals to clean wounds, mix medications or treat dehydration. Now drug companies say they won't be able to catch up with demand until next year.

That leaves San Francisco General Hospital's materials manager, Reid Kennedy, in a fix. Kennedy is in charge of managing all the gloves, bandages, bedpans and IV solutions for the emergency room, medical floors and operating room.

He got a call last year from his vendor telling him it might not be able to deliver his full order.

"We were put on notice that it was going to be tight," he says, walking through the basement warehouse.

Then things got worse in January. The flu season hit much harder than expected, and sick people flooded into hospitals. Saline bags flew off the shelves to treat dehydration. Demand far outstripped supply.

But it's difficult to ramp up production, explains Capt. Valerie Jensen, the director of the drug shortage program at the Food and Drug Administration.

"To make one of these drugs is very complex, even though the drug itself is simple," she says. "It takes about three weeks to make one batch of normal saline from start to finish."

She says it's challenging to make sure saline products are sterile. If you swallow a pill with a little bit of dirt on it, you'll probably be fine. But contaminated saline injected into your vein could cause a big problem.

That's why the FDA sets strict quality standards for the facilities that manufacture saline and other IV drugs, but the agency has to find a delicate balance between safety and supply.

Some suppliers suggest that keeping up with the FDA's standards is too onerous and may be playing a part in the shortage.

"A lot of variables came together to create this," said Scott Crandall, director of medical supply contracts at Novation, a group buying organization in Texas that manages contracts for San Francisco General and 2,000 other hospitals across the country. He's been hearing from manufacturers that increased FDA scrutiny is interfering with drug production.

"During the last year, all suppliers had issues in their facilities where they had to correct certain things the FDA found," he says.

Some of those things were serious. Hospira, one manufacturer of saline, issued a recall earlier this year because of leaks in its saline bags. Manufacturer Baxter found particles in saline vials and had to recall four lots. Both companies say the recalls had no bearing on the current shortage.

Colin Carthen is the procurement director for Satellite Healthcare, which runs 70 dialysis centers. He says Baxter told him winter weather was also a problem. Snow and ice storms in the Midwest delayed trucks headed for California.

"As the weather got worse, we began to see more and more back-order issues," he says. Each dialysis patient needs about 4 liters of saline every week to help clean his or her blood. At the worst of the shortage, Carthen felt like the lives of all 6,000 patients depended on him to find them saline.

"I called up a clinical person that I knew at like 11:30 at night and said, 'Well, what happens if we run out of saline?' Because I was really afraid," he remembers. "And they were just like, 'Yeah, it gets ugly, fast.' "

If supplies were to get really low, clinics would have to triage patients so the sickest could get treatment first. Without any dialysis treatment, toxins accumulate in the blood, and patients can die. So every day, Carthen spent hours juggling and rerouting supplies so everyone had enough.

Hospitals have developed new clinical protocols to conserve supplies during the shortage. Nurses at San Francisco General are using smaller saline bags when possible, and transitioning patients who still need hydration to drinking water from cups a little sooner than they did in the past.

The FDA is trying to mitigate the shortage by importing saline from Spain and Norway.

Both Baxter and Hospira, the top two saline producers in the country, say they are doing all they can to maximize production. Each points a finger at other suppliers for contributing to the shortage.

"We saw increased demand amid decreased product availability from competitors as the main driver," a Baxter spokesman writes in an email.

A Hospira spokesman says: "Hospira began seeing stronger demand for its saline products in late 2013 when another manufacturer began to experience manufacturing issues."

Hospira reported a 20 percent increase in U.S. sales of its injectable drugs between January and March, citing "increased volume due to competitor supply issues," in its latest quarterly financial report.

For now, the price of saline is steady. Hospitals have contracts that keep rates locked in through next year. But when those contracts expire, it's possible hospitals will pay two or three times as much.

This story is part of a partnership between NPR, KQED and Kaiser Health News.