Accessibility links
As Heart Attacks Rise In China, So Does Attention To Quality Of Care : Shots - Health News There's been a quadrupling of hospitalizations for heart attacks in China since 2001. An in-depth look finds improvements in some heart attack care and significant quality gaps for others. 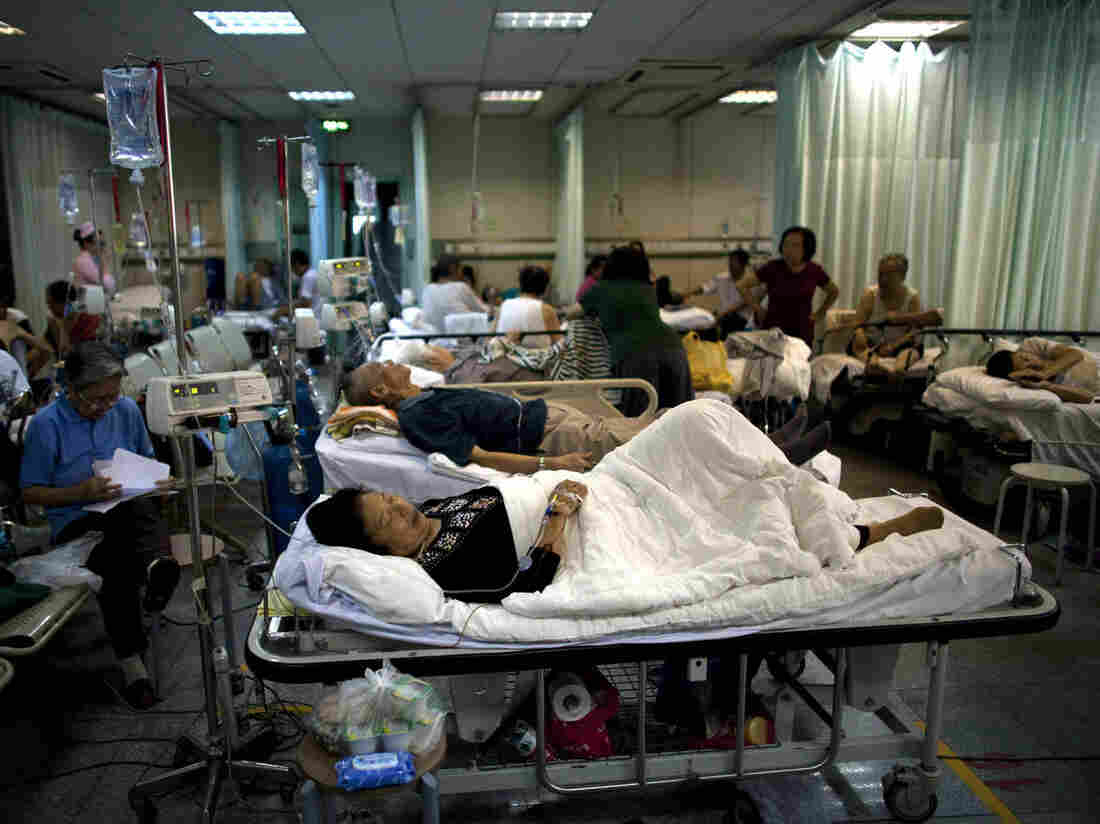 Patients who had suffered heart attacks rest while being observed in the emergency room of a heart hospital in Beijing in 2011. Alexander F. Yuan/AP hide caption 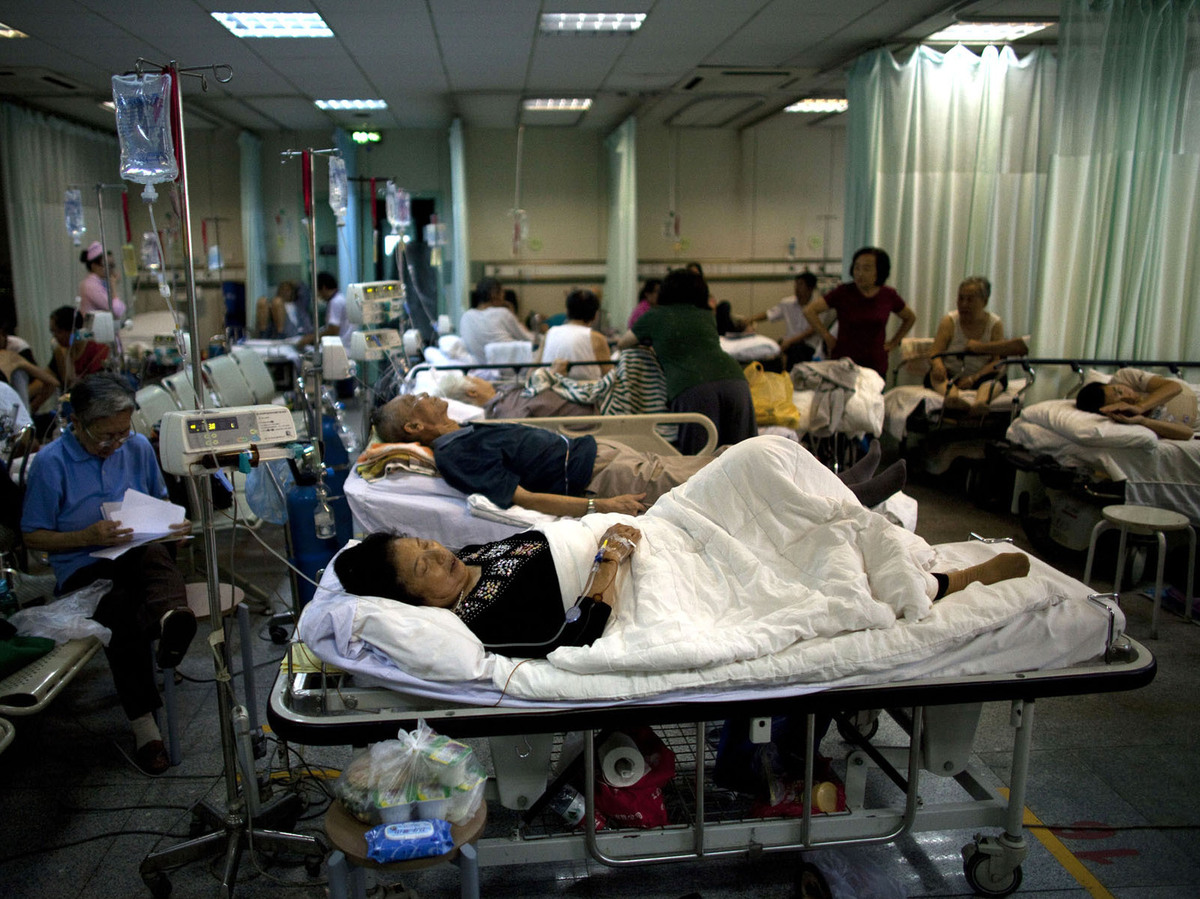 Patients who had suffered heart attacks rest while being observed in the emergency room of a heart hospital in Beijing in 2011.

Over the past several years, I've had the opportunity to be involved in a remarkable project in China. With the publication of a paper in The Lancet today that details the nation's performance in the care of patients with severe heart attacks, a pivot to include quality in addition to access to care in their health care reform has begun.

China, like many low- and middle-income countries, is facing immense challenges from diseases that were once rare there. Infectious diseases have receded, though they are still important, and noncommunicable conditions of modern living, such as heart disease and cancer, are rising.

Because China accounts for 20 percent of the world's population, the number of people that will be affected is mind-boggling. The World Bank estimates that the number of heart attacks in China will grow from about 8 million today to 23 million in 2030. While prevention efforts to slow or reverse the progression of heart disease are essential, there is an immediate need to provide high-quality health care services to the people who are affected.

In the United States, we learned over the past 30 years that our assumptions about the performance of our health care system didn't match the reality. Our perceptions of how good we were as doctors and hospitals yielded to evidence that we have much overuse, underuse and misuse of tests and procedures.

Care and cost vary in ways that don't serve patients or the public well.

The U.S. is in the midst of intensive efforts to measure quality of care, to make it transparent and to improve it.

The best success story in the United States is in care for heart disease, where a variety of initiatives, including some funded by the government, identified gaps in quality. Then health care professionals, national organizations — including the American College of Cardiology and the American Heart Association -- and the government worked together to implement improvements. We in the U.S. are still far from where we need to be, but the improvements have been dramatic.

Almost 20 years ago there was a 50-50 chance that you would receive vital, life-saving medications for a heart attack such as a beta blocker. In some parts of the country you were even less likely to be treated with medications proven beneficial. Now treatment with these medications is virtually assured.

Almost 10 years ago only about a third of patients were treated promptly for heart attacks with clot-busting drugs or procedures, like percutaneous coronary intervention. Now it's almost guaranteed that you will be treated quickly.

People commonly think of health care quality only in terms of some tangible end result, but in reality, quality is also a process. And this process involves a willingness to look deeply into the reality of performance, including a commitment to quantifying the results and shortcomings, and then doing something about them.

The Lancet article, of which I'm a co-author, is the first to report the national picture of heart attack care in China over the past decade. It documents a quadrupling of hospitalizations for heart attacks, mirroring the projections by others. It also shows marked improvement in quality of care for some treatments and gaps in quality for others.

For example, the use of statins, cholesterol-lowering drugs shown to reduce risk in this high-risk population, has grown dramatically over the decade. In contrast, the use of treatments to improve blood flow to the heart for these patients, a proven approach to improve survival, is only delivered to half of the patients. Their use hasn't improved at all since 2001 either.

Meanwhile, the risk of dying from a heart attack hasn't improved, which is a disappointment. That finding provides a persuasive rationale for improving the quality of care throughout China.

What is truly remarkable to me is that the government supported this assessment and committed to allowing it to proceed independently. The government agreed that the results could be published and that it would have no role in approving the publications or influencing their content.

The Chinese government funded the work adequately to make sure that researchers could use the most advanced scientific methods and that the results would be truly representative of the country, including rural and secondary hospitals, through appropriate survey methods.

This project suggests that China is prepared to embrace quality of care as a critical facet of its health care future. The Chinese government has already funded an improvement initiative to address gaps identified in this study and to produce generalizable knowledge about new approaches to improve health care in China. The journey has begun, and China is now rising in yet another way: health care quality.

Skeptics may question whether such transparency and independence for quality improvement will continue. My hunch is that they will find that this transparency and commitment to improve will serve their people well. Perhaps in the future, China can put itself in a position to export knowledge about how best to produce a health care system that is accountable for the highest quality care and the very best results for their patients.