Accessibility links
Could The Ebola Outbreak Spread To Europe Or The U.S.? : Shots - Health News The current Ebola outbreak in West Africa is the deadliest in history. And it's spreading in a city with an international airport. So what's the risk of a sick traveler bringing the virus to the West? 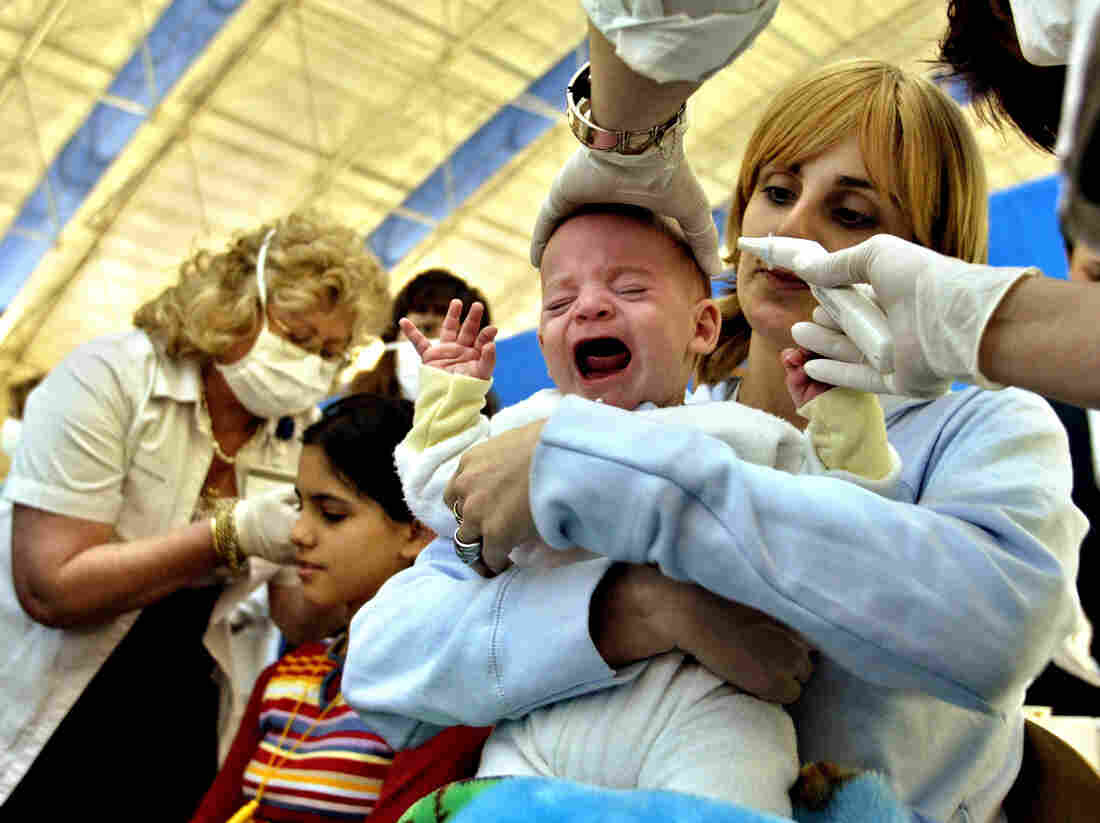 On the lookout for SARS, an employee checks a baby's temperature at the Ben Gurion Airport in Israel, in 2003. The deadly virus quickly spread around the world once it reached Hong Kong, a central travel hub. Nir Elias/Reuters/Landov hide caption 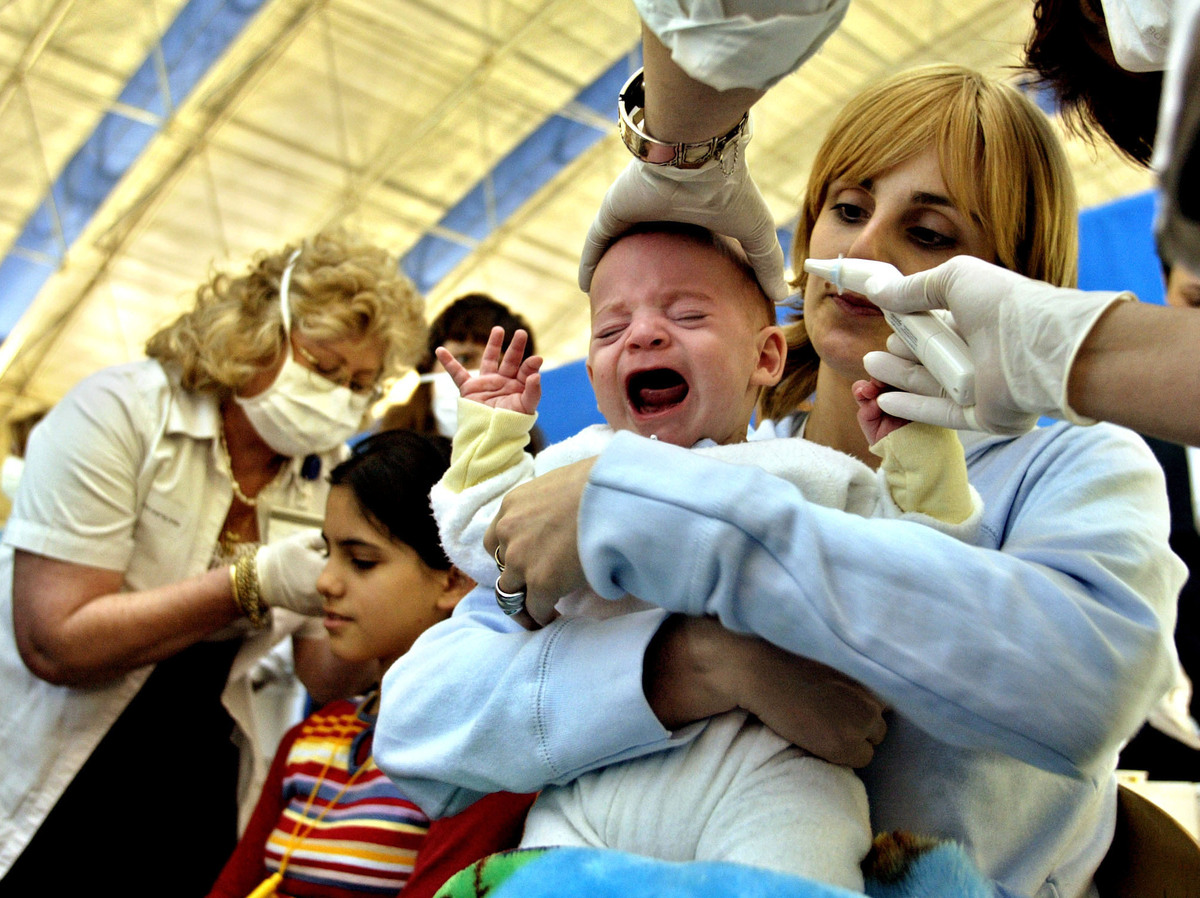 On the lookout for SARS, an employee checks a baby's temperature at the Ben Gurion Airport in Israel, in 2003. The deadly virus quickly spread around the world once it reached Hong Kong, a central travel hub.

Ebola headlines this past week make the hair stand up on the back of your neck.

And it's true: The outbreak in West Africa is the largest in history. Nearly 500 people have caught the hemorrhagic virus in Guinea, Liberia and Sierra Leone. The death toll so far is 338, the World Health Organization said Tuesday.

So should Europe and the U.S. begin worrying about the virus?

"The chance of Ebola spreading out of West Africa is very, very low," says infectious disease specialist Kamran Khan, with St. Michael's Hospital in Toronto. "But if it did spread, Paris is probably the first city on the list."

Paris? Why single out that city?

To answer that, let's back up a bit.

Khan and his team have spent years figuring out how viruses and bacteria move around the globe. "We look at many outbreaks and decide what paths they're going take," he tells Shots. "The big question is whether sick people are going to get on a plane and spread the disease."

That answer, he has found, depends largely on two factors: How many people are infected, and the degree of travel from the outbreak area.

Take SARS, for example, the respiratory virus that can spread through water droplets when a person coughs or sneezes. When SARS first appeared in 2002, it was isolated to rural China. So it spread slowly.

After about four months, a doctor brought SARS to Hong Kong. The outbreak quickly worsened.

"The airport in Hong Kong is a major, major international hub," Khan says. "You could see SARS start spreading rapidly around the world from there."

The virus jumped from Hong Kong to Vietnam and Thailand. It crossed the Pacific Ocean to Canada and the U.S. Eventually, it reached several countries in Europe. More than 8,000 people caught the virus.

But critical differences between SARS and Ebola make the Ebola virus much less threatening, Khan says.

The major city affected by the Ebola outbreak is Conakry, Guinea, home to about a million people and an international airport. But it's not a central hub, like Hong Kong International Airport or Chicago O'Hare.

"The volume of travel in the Conakry airport is low," Khan says. "Most of the flights are local. But 10 percent of the traffic goes to Paris." That would make Paris the likeliest place for Ebola to arrive.

And it is a possibility. After a person is infected with Ebola, symptoms could appear within two days — or take up to 21 days, Khan says. So a person infected in Guinea could hop on a plane and bring Ebola to, say, France or another international destination.

Even if that happens, the odds of fellow passengers catching the virus are extremely low, says Dr. Mark Gendreau, who specializes in aviation medicine at Lahey Medical Center in Peabody, Mass.

In 1996, a Gabon man with clear symptoms of Ebola boarded a plane to Johannesburg to seek medical treatment. He had a fever above 105 degrees Fahrenheit and signs of internal bleeding.

The man eventually made it to a hospital in South Africa. He did not infect anyone during his flight or other travels, the European Centre for Disease Prevention and Control reported.

Why? Unlike SARS, Ebola doesn't pass easily from person to person. "Transmission requires very close contact with bodily fluids, like blood or mucus," Gendreau says. "You need prolonged contact with somebody."

There's another case that argues against Ebola spreading because of airline travel.

In 2004, a businessman visiting Sierra Leone flew to London and then the U.S. He had a fever, diarrhea and back pain. When he reached his hometown in New Jersey, he went straight to a hospital.

The diagnosis was Lassa fever — another hemorrhagic virus that, like Ebola, is transmitted through bodily contact. The Centers for Disease Control and Prevention tracked down 188 people who had close contact with the man during his travels, including 19 passengers on the flight from London to Newark. The CDC reported that none of them caught the virus.