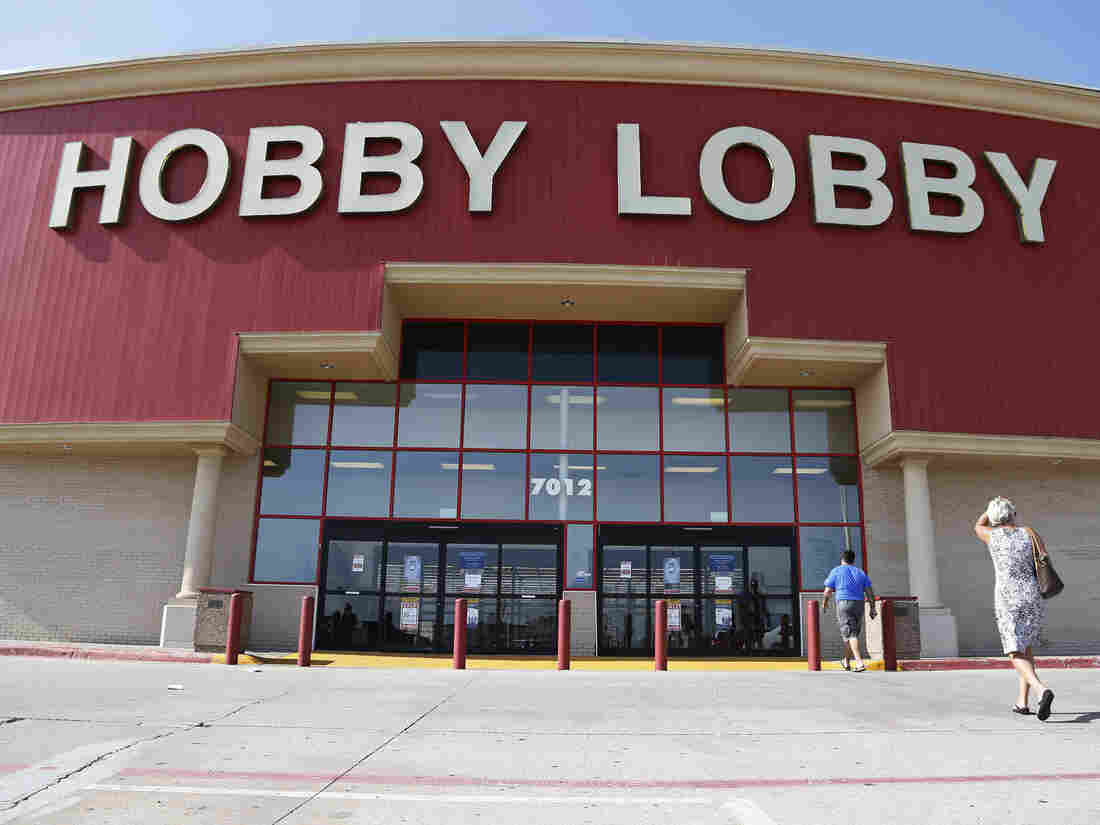 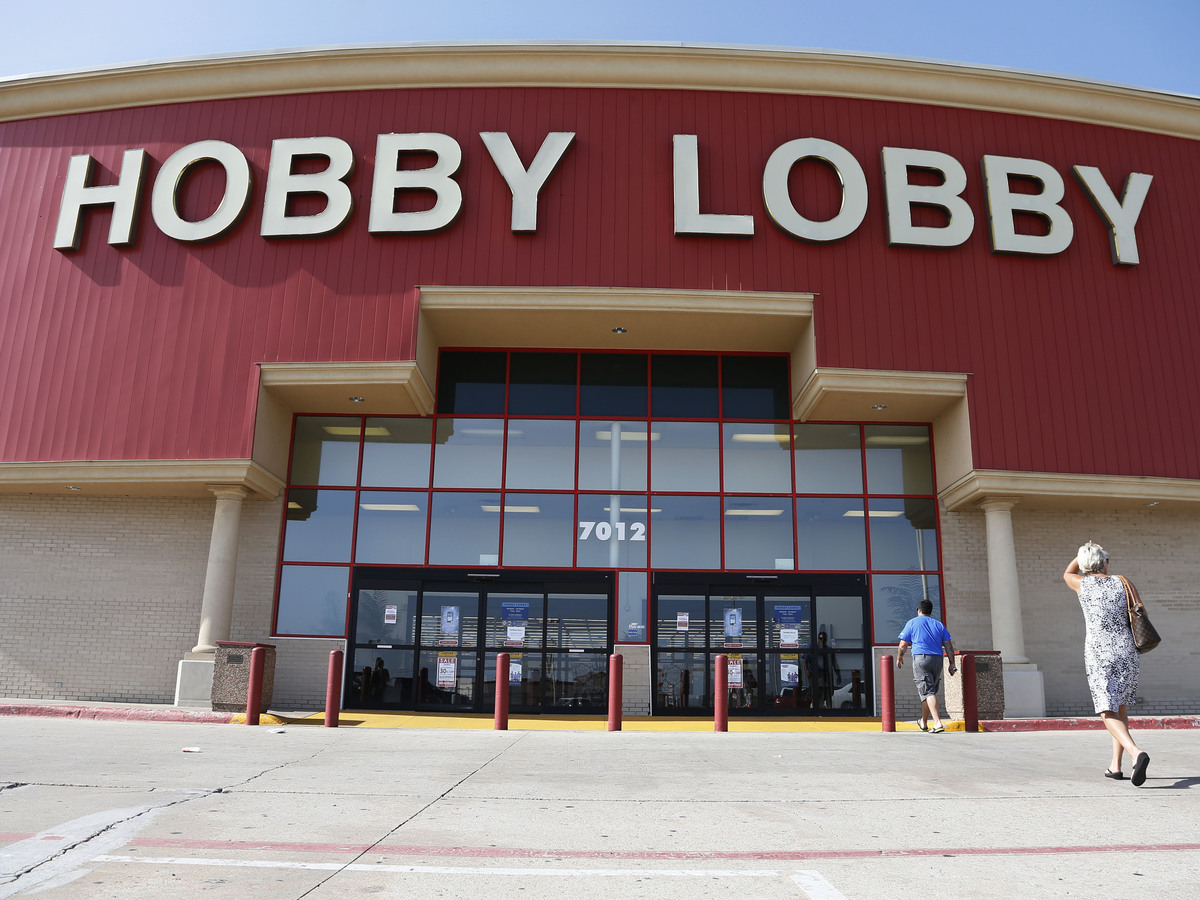 Customers walk into a Hobby Lobby store in Oklahoma City on Monday.

In a 5-4 decision Monday, the Supreme Court allowed a key exemption to the health law's contraception coverage requirements when it ruled that closely held for-profit businesses could assert a religious objection to the Obama administration's regulations. What does it mean? Here are some questions and answers about the case.

What did the court's ruling do?

The court's majority said that the for-profit companies that filed suit — Hobby Lobby Stores, a nationwide chain of 500 arts and crafts stores, and Conestoga Wood Specialties, a maker of custom cabinets — didn't have to offer female employees all Food and Drug Administration-approved contraceptives as part of a package of preventive services that must be covered without copays or deductibles under the law. The companies had argued that several types of contraceptives violate their owners' religious beliefs. The ruling also covers a Hobby Lobby subsidiary, the Mardel Christian bookstores.

What does the health law say about contraception coverage?

As part of the law's coverage of preventive health services, health insurance plans are required to cover all FDA-approved contraception methods for women without any cost-sharing, such as deductibles or copayments. Those methods include birth control pills, intrauterine devices and sterilization procedures. Employers with 50 or more workers that offer coverage that doesn't meet that standard would face fines of $100 a day per worker. These large employers that don't offer any coverage face a fine of $2,000 for most employees. The contraceptive guidelines apply to women only.

Some Companies Can Refuse To Cover Contraception, Supreme Court Says

Writing for the majority, Justice Samuel Alito stated that Hobby Lobby would have faced fines of $475 million a year and Conestoga $33 million for excluding some forms of birth control from their health plans. If the employers had decided to drop coverage altogether, Hobby Lobby would have paid roughly $26 million in penalties and Conestoga $1.8 million, far less than the fine for not covering all FDA-approved methods of birth control.

The Department of Health and Human Services set the contraception requirement based on an Institute of Medicine study that recommended prescription contraception and services, including all FDA-approved methods of contraception, be included as preventive services for women. Most health plans had to cover contraceptive services for plan years beginning on or after Aug. 1, 2012, according to HHS. Grandfathered plans that hadn't changed significantly after the health law passed do not have to offer preventive health care — including contraception — without cost-sharing.

Why did these companies bring suit?

Hobby Lobby and Conestoga are family-owned, and they said that the health law's contraception requirement violated their religious views. While both employers' health plans cover some forms of birth control, the employers object to emergency contraceptives such as Plan B and Ella that can prevent a pregnancy if taken within a short window after unprotected sex. The owners contend that these contraceptive methods prevent a fertilized egg from implanting in the woman's uterus and therefore are a type of abortion. Hobby Lobby's owners also object to two types of intrauterine devices, or IUDs, for the same reason.

A View On High Court's Ruling, From A Hobby Lobby Grand Opening June 30, 2014

The companies argued that they should be exempted from the contraceptive requirement because the 1993 Religious Freedom Restoration Act, or RFRA, says that the government may not pose a "substantial burden" on the free exercise of religion unless that burden is the narrowest possible way to further a compelling government interest. The federal government and advocates for the health law's contraception requirements argued that only individuals — not corporations — can exercise religious rights.

Does everyone agree that the contraceptives that Hobby Lobby and Conestaga object to cause abortions?

No. U.S. Solicitor General Donald Verrilli said during the oral arguments in the case on behalf of the Obama administration, "Federal law and State law — which do preclude funding for abortions — don't consider these particular forms of contraception to be abortion."

A brief filed by 10 medical groups led by the American College of Obstetricians and Gynecologists noted "there is a scientific distinction between a contraceptive and an abortifacient and the scientific record demonstrates that none of the FDA-approved contraceptives covered by the Mandate are abortifacients."

That's because the standard medical definition of the start of pregnancy is when a fertilized egg implants in a woman's uterus, not when sperm and egg first unite.

But while blocking implantation of a fertilized egg doesn't fit the medical definition of pregnancy, it does qualify as ending a life for many religious people.

Are there any religious exceptions from the health law's contraception mandate?

Churches and other houses of worship are exempt from the requirement to provide contraceptive services at no cost to employees. However, religious-affiliated institutions, such as universities and hospitals, would have to provide coverage for all FDA-approved contraceptive methods. Those organizations objecting to such coverage can turn to a third party, such as an insurer, to cover the cost of contraception, under a plan outlined by the Obama administration last year.

Some of these religious organizations, including some Catholic and other Christian groups, have also brought suits against the government mandate. Those are still being adjudicated in lower courts.

How does this federal case relate to state laws governing contraception coverage?

More than half the states have their own laws mandating contraception coverage, and most of them have some sort of exemption for religious employers. One key difference between the federal law and state laws is that under the federal health law, employers offering non-grandfathered health coverage must provide contraceptives without cost-sharing to female employees.

What does the ruling mean for employers?

Some analysts who agreed with the Obama administration think the ruling means that employers could use religious objections to opt out of other areas of health care coverage. For example, earlier this month Barry Lynn, executive director of Americans United for Separation of Church and State, told KHN that in health care alone, "Scientology-believing employers could insist upon non-coverage of its nemesis, psychiatry. And Jehovah's Witnesses' corporations could demand exclusion of surgical coverage, under the theory that so many of such procedures require the use of whole blood products, forbidden by their faith."

But Justice Alito's decision went to lengths to limit the scope of the decision. "This decision concerns only the contraceptive mandate and should not be understood to hold that all insurance-coverage mandates, e.g. for vaccinations or blood transfusions, must necessarily fall if they conflict with an employer's religious beliefs."