Accessibility links
A YouTube Video Is Doctor's Secret Weapon Against Back Pain : Shots - Health News Back pain is common. Nearly all of us have at least one episode in our lives, and two-thirds of us will have it repeatedly. Exercise, though it may seem counterintuitive, is often the best medicine.

A YouTube Video Is Doctor's Secret Weapon Against Back Pain

A YouTube Video Is Doctor's Secret Weapon Against Back Pain 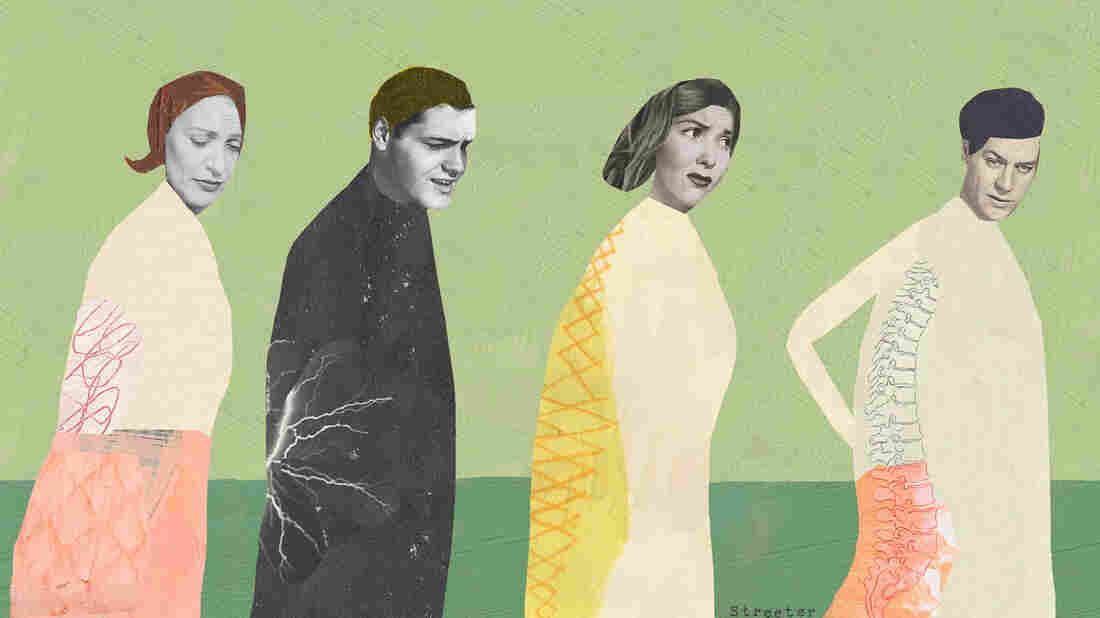 A woman in her late 20s came to see me recently because her back hurt. She works at a child care center in town where she picks up babies and small children all day long.

She felt a twinge in her lower back when hoisting a fussy kid. The pain was bad enough that she went home from work early and was laid out on the couch until she came to see me the next day.

In my office she told me she had "done some damage" to her back. She was worried. She didn't want to end up like her father, who'd left his factory job in his mid-50s on disability after suffering what she called permanent damage to his back.

Back pain is common. I see someone with back pain almost every day. Nearly all of us have at least one episode in our lives, and two-thirds of us will have it repeatedly. If you've somehow lived into your 40s and never suffered low back pain, congratulations! You're what doctors like me call an outlier.

In my patient's case, I was confident that her back pain wasn't serious. A minor injury was the clear cause. And nearly all back pain like hers from a simple mechanical strain gets better on its own.

I wanted to reassure her. I told her to go about her daily life. Keep exercising, but try to take it just a little bit easy until she felt better. At a minimum, I said, she should be walking 30 minutes a day. Also, try some ibuprofen, which helps with inflammation and doesn't require a prescription.

But she wasn't buying it.

"Don't I need an MRI, or at least an X-ray?" she asked. "My father had three herniated discs and wound up with two back operations. He still never has a day without at least some pain."

I upped the ante. I told her I could refer her to physical therapy, one of the few things shown to be truly helpful for low back pain.

No dice. She insisted on an MRI just to be sure.

A test like that wasn't warranted, in my opinion, because it would neither change her treatment nor the course of this first-ever bout of back pain.

She would just get better.

To convince her of this, I had to resort to my secret weapon: I showed her an 11-minute educational video created by Dr. Mike Evans of Toronto.

You may be familiar with Evans' work, even if you've never heard of him. He's the man behind the famous "23 1/2 Hours" whiteboard video that says the single-best move for health is being active for a half-hour or so a day. The video became a viral Internet sensation, racking up millions of page views, and even a shoutout on the hit TV show Orange Is the New Black.

Evans is passionate about making complex medical ideas simple. He and his team have made more than a dozen whiteboard videos on health topics including how to deal with stress, acne, quitting smoking and even flatulence.

"I'm looking for topics that affect a wide range of people, and are generally ignored by the health care system," Evans told me. Themes common to Evans' work include the importance of good daily habits and having a resilient attitude. He touts the importance of basics: walking, healthful relationships, avoiding stress and sleeping well.

In Evans' video about lower back pain, he cites a study in which 98 healthy volunteers got MRI scans. Two-thirds of the MRIs revealed some funky looking discs, even though the people felt fine.

Just because a scan shows something doesn't mean there's a real problem. In fact, there's a surprising lack of correlation between back imaging and how someone feels and gets around. Evans also points out that the most common mistake with low back pain is to stop being active. The other common problem is worrying that the pain will never get better.

Evans, who is 50, teaches us that back pain is something we're all vulnerable to and for which it makes sense to have a coping strategy ready.

Has Evans, who still plays hockey, ever had back pain? "I'm a member of the 90 percent club," he affirmed, meaning that like the vast majority of us, he's both had back pain and that it has improved on its own.

Fortunately for my patient, she wound up in the same club. At her next visit, she smiled and reminded me of the video's punch line: "Movement is medicine."

All of which is to say that the longer I practice medicine, the more convinced I'm becoming that less is often more.