Accessibility links
Why We Published A Photo Of A 16-Year-Old In A Diaper : Shots - Health News Readers responded strongly to our series about caregiving, especially one photo of a father caring for his son with cerebral palsy. Some said it was demeaning. Others said it revealed great love. 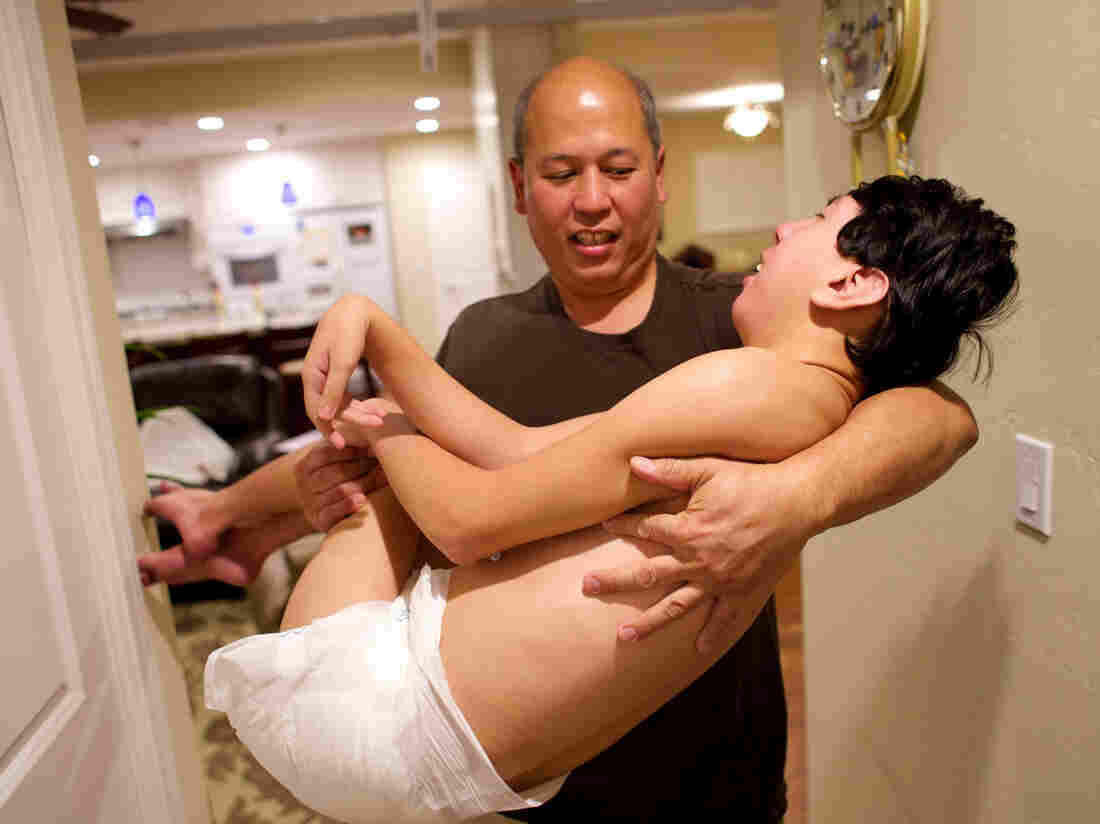 James Lee often has to pick up his 100-pound son, Justin. Photographer Andrew Nixon shot this photo in an effort to show how being caregivers affects the aging parents. Andrew Nixon/Capital Public Radio hide caption 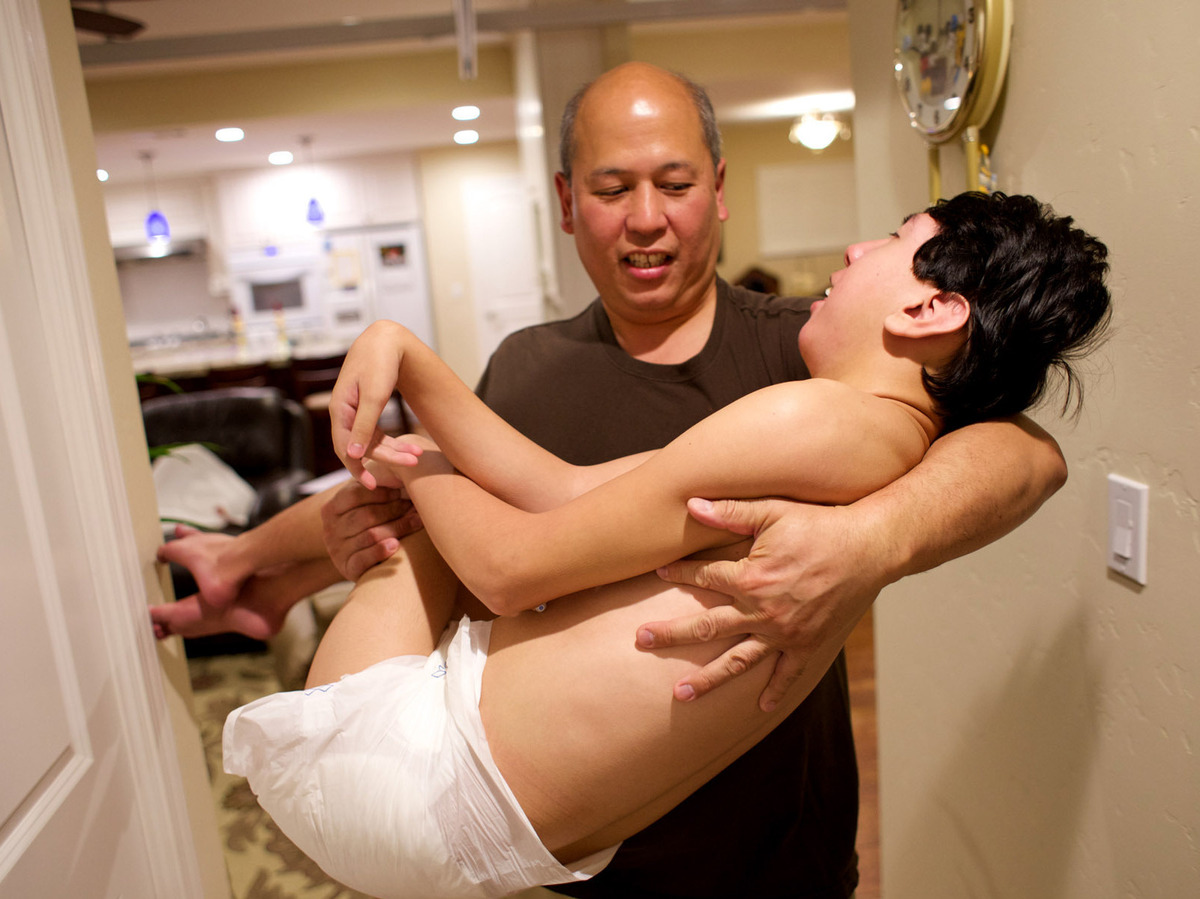 James Lee often has to pick up his 100-pound son, Justin. Photographer Andrew Nixon shot this photo in an effort to show how being caregivers affects the aging parents.

The series on family caregivers that NPR ran over the Fourth of July weekend sparked an extraordinary response, with tens of thousands of comments and likes on Facebook and NPR.org.

Many people responded to the intimate photographs of families caring for sick or disabled parents, siblings and children.

And not all those responses were positive. One photo in particular, of James Lee carrying his 16-year-old son Justin wearing only a diaper, struck many readers of a story about his care as undignified and disrespectful. "I'm sure this may be a great story, NPR, but as a person with a disability myself, I'm unhappy with the picture you chose. Did you consider this man's personal privacy when you decided to use the photo?" Ed Ahern wrote on NPR's Facebook page.

Others felt that it was an honest view into the life of family caregivers. Abigail Moe commented on Facebook, "What I see, as a person directly unaffected by circumstances like this, is a loving father carrying and embracing his son. ... this isn't just a 'shock value' photo; it provokes more than that."

I called photographer Andrew Nixon, a multimedia producer for Capital Public Radio in Sacramento, Calif., and asked him about the comments and photos, which he shot over the course of two months. Our conversation has been edited for length and clarity.

Many readers objected to the photo of James Lee carrying his teenage son Justin wearing a diaper on the way to the shower. How did you decide to photograph such a sensitive situation?

We tried to get a wide range of experiences that the family went through. And part of that is bathing your son, because he can't do it himself. The Lees were very comfortable being photographed. I felt it was clear to them that I wasn't there to embarrass them.

His parents demonstrated pretty thoroughly that they really have his best interests at heart. And he's not in a position to tell them what he does and does not want. I think the photo served the purpose of showing a father taking care of his son. If it was just Justin, I think that would have been disrespectful. It would have crossed that line.

Did you take photos of the Lees that you think did cross the line?

Some of them did, so we just didn't publish them. And I saw some of the comments that said, 'You know, you don't need to show someone in this situation to get that point across,' and that's true to an extent.

When I edited the story for NPR, I didn't see the photo as disrespectful or indecent. And we're very careful about photographs of minors. What stood out to me was, here are James and Judy getting older as parents and caring for their son who can't care for himself — a job that's very physically demanding. I felt the reality and weight of that in the photo.

The story is more about the parents and their experiences caregiving. If Justin were alone, I feel it would undermine the photo. But he wasn't. He was with his father, and you can see that he clearly loves him.

That love resonated with many people, and you can see that in the comments.

Most of it was positive –- what wonderful parents, what a great thing that their faith let them tackle this. There were people complimenting them on how they take care of their son, people complimenting them on their marriage. I felt that people had a good handle on the Lees and how extraordinarily loving and patient and what nice people they are.

Do you think the Lees were prepared for the criticism?

I don't think they were expecting some of the comments on Facebook. Some of the ugly comments about them as a family threw them off.

They weren't bothered by the photo at all.

Caregiving seems like a challenging topic to photograph because it's about relationships. How did you approach the series visually?

A lot of people don't think their daily life is very interesting, but when you're an outsider observing people whose lives are affected by the story you're trying to tell, then the whole of their day becomes interesting.