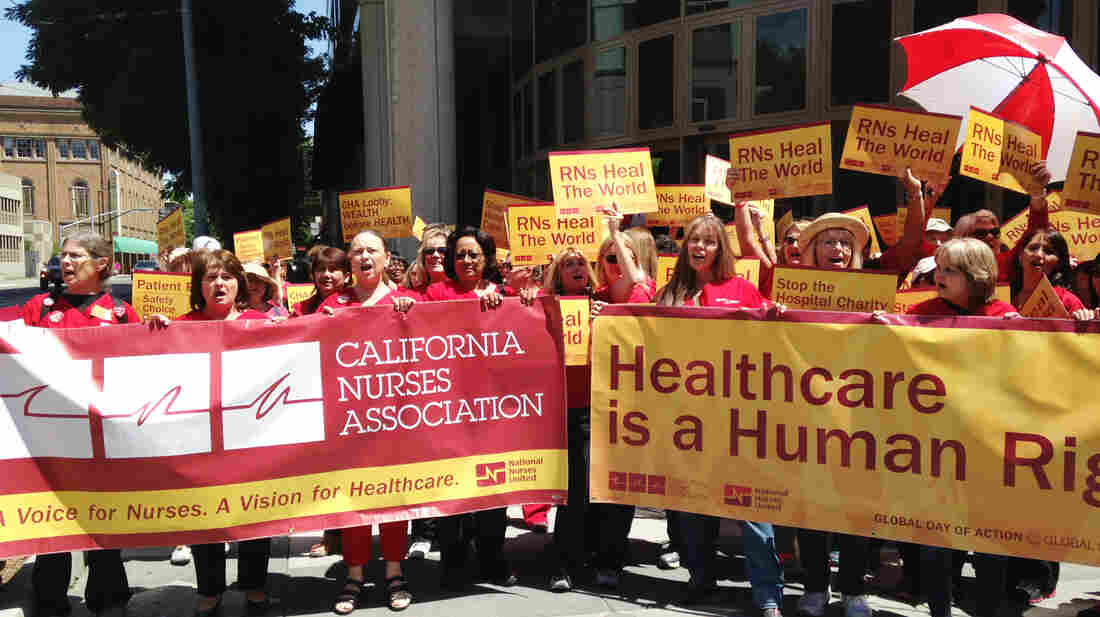 Members of the California Nurses Association say they rallied in Sacramento in May to raise public awareness of their concerns about patient care in California hospitals. April Dembosky/KQED hide caption

Going to a union meeting of nurses is a little bit like going to an evangelical church service.

"We all have to stand up, and it's a struggle," says Veronica Cambra, a nurse reporting a grievance at Kaiser Hospital in Fremont, Calif., as though she's giving testimony. "And we will overcome this, OK?"

The rest of the nurses respond with the passion of a devout congregation, humming "Mmm hmmm," and "That's right," through the series of speeches.

But this is no church service. The California Nurses Association is rousing its troops for battle. The powerful union will begin bargaining Thursday with Kaiser Permanente on a new four-year contract for nurses at its northern California hospitals. Kaiser operates the largest hospital system in the state — largest by number of hospitals and by number of hospital beds — and is the eighth largest health system in the country.

The union is anticipating that Kaiser will propose cuts at the negotiation, and leaders want to make sure nurses are ready to fight back — and, if necessary, go on strike.

Four years ago, nurses ratified the first contract proposal Kaiser offered without objection. Both sides had reason to keep tensions to a minimum, according to Joanne Spetz, an economics professor at the University of California, San Francisco School of Nursing.

Last time the nursing shortage was still a recent memory, she says, and Kaiser wanted to hold on to its experienced nurses. It was also the end of a recession, and nurses didn't want to appear greedy.

But a lot has changed in the past four years. The economy in northern California has improved. And the Affordable Care Act has fundamentally changed hospital economics. For starters, Spetz says, the health law is generating a lot of new customers for Kaiser.

And if there is growth, Spetz says, the nursing group is following a union's classic role, "which is to say, 'Well, if there's going to be increased net revenue, we should get a cut of that.' "

But the union isn't talking money yet. The leaders are framing all their demands around patient care. Nurse practitioner Rachel Phillips says she is under unrelenting pressure at work to see more patients in less time.

"When I first started at Kaiser, I wasn't rushed with my patients," Phillips says. "I could have 30 minutes with a new patient. That time has been whittled away. We're currently asked to see patients every 15 minutes, regardless of the complexity of their medical issues."

Heart Of The Matter: Treating The Disease Instead Of The Person

Nurses at Kaiser's intensive care units and emergency rooms say the hospital system has been skimping on care, discharging patients who should be admitted, or closing pediatric or cardiology units.

Kaiser says a lot of the union's claims are misleading or untrue.

"We actually need [fewer] nurses in the hospital," she says. Improvements in technology and reductions in hospital infections mean there are fewer patients staying in the hospital — 250 fewer now per day, on average, compared with a few years ago. She gives an example from earlier this year when her husband had foot surgery.

The Affordable Care Act also puts pressure on hospitals to cut costs, she says. Medicare reimbursements are going down, which cuts into hospital revenues. And health reform has made the insurance market a lot more competitive, so Kaiser has to keep prices low.

"As consumers have opted to join us," Crawford says, "our expectation and promise to them is that we keep their costs down."

But the nurses have power in numbers, says Spetz. The California Nurses Association founded a national arm — National Nurses United — that has been gaining members across the country, most recently in right-to-work states like Florida and Texas. Spetz says this local fight likely has national aspirations.

Labor Strife Can Pay Off Big For Some Nurses

She says if California nurses win on wages, benefits and patient care, they'll inspire nurses in their national network to push for similar fights in their own states.