Accessibility links
Getting Hospice Care Shouldn't Have To Mean Giving Up : Shots - Health News Medicare is trying a different approach in one experiment: Some hospice patients will still be able to get treatments aimed at prolonging life. 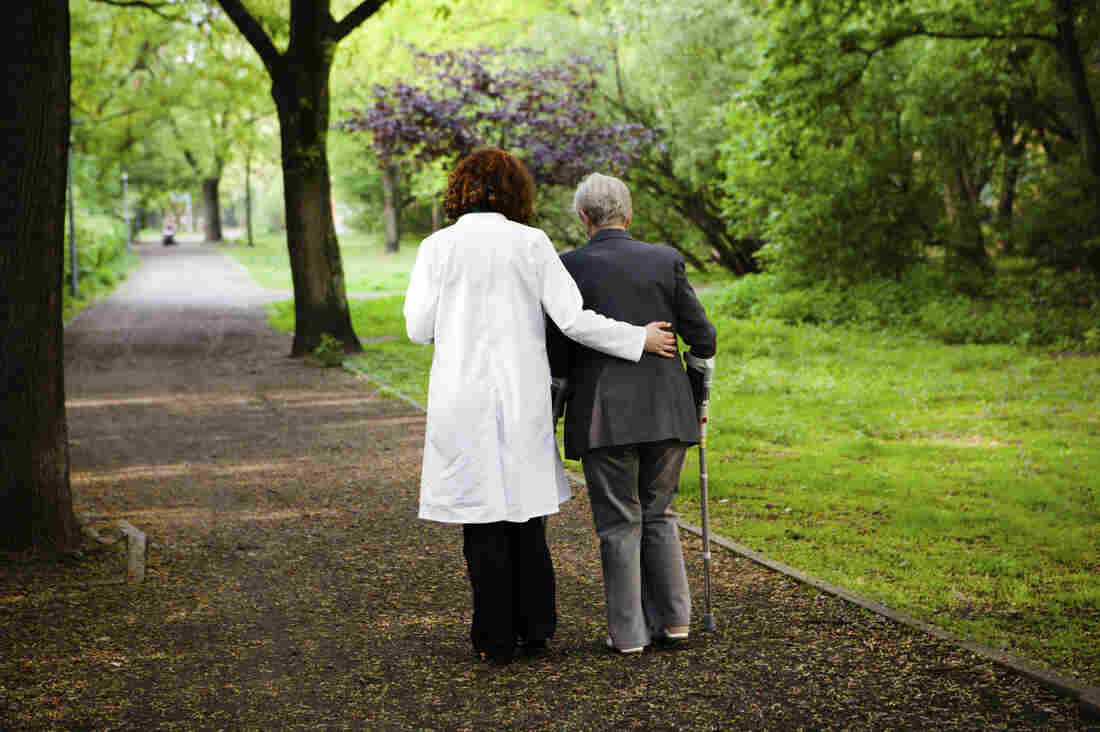 Patients who get the comforts of palliative care as well as disease treatment live longer, studies show, than those who only get treatment for the disease. Annette Birkenfeld/iStockphoto hide caption

It's a painful dilemma for seriously ill Medicare patients: To receive the extra support, counseling and care provided by the program's hospice benefit, they have to agree to stop receiving curative treatment for their disease.

Faced with that stark either-or choice, many forgo hospice care until the last days of their lives. The median length of time a Medicare patient was in hospice in 2012 was just 19 days, according to the National Hospice and Palliative Care Organization.

Now an experimental project, set to enroll 30,000 people over the next few years, will allow some hospice-eligible Medicare patients to get treatment for the disease and hospice care at the same time.

"I think it's a recognition that this forced choice between palliative care and life-prolonging treatment is irrational," says Dr. Diane Meier, director of the Center to Advance Palliative Care.

The comforts of palliative care focus on treating the pain, stresses and symptoms of serious illness, aiming to maximize the quality of life for people and their caregivers at any stage of illness, says Meier, a professor of geriatrics and palliative medicine at Mount Sinai in New York City. Under the traditional Medicare program, she says, the hospice benefit provides palliative care services only if doctors have certified the patient has less than six months to live if the disease follows its natural course, and if the patient agrees to stop receiving curative treatment for it.

My prediction is that it will actually be less expensive to provide both approaches at the same time, precisely because it will lead to less need for costly emergency and crisis care.

Under the experimental Medicare Care Choices Model, people with advanced cancers, chronic obstructive pulmonary disease, congestive heart failure or AIDS will be able to receive a range of hospice services, even as they continue to see their regular health providers for treatment of the illness. Hospices selected to participate in the program will be responsible for coordinating their patients' care.

Medicare expects 30,000 patients to take part in the program, from at least 30 rural and urban hospices that have applied to participate. Medicare administrators will announce the names of the hospices within the next several months.

Patients in the program might, for example, continue to receive radiation and chemotherapy to treat a tumor that's pressing on bone and causing pain. It treats their cancer but it also makes them feel better, says Meier.

"It makes sense," says Meier. "People aren't in excruciating pain; they're not depressed. And if, very importantly, people are able to avoid the very real risks of hospitals, it's no surprise that they live longer."

"My prediction is that it will actually be less expensive to provide both approaches at the same time," she says, "precisely because it will lead to less need for costly emergency and crisis care."