Accessibility links
Hospitals Fight Proposed Changes In The Training Of Doctors : Shots - Health News The Institute of Medicine this week urged Congress to allocate to community clinics more of the $15 billion it spends annually on training new doctors. But hospitals say that's the wrong prescription. 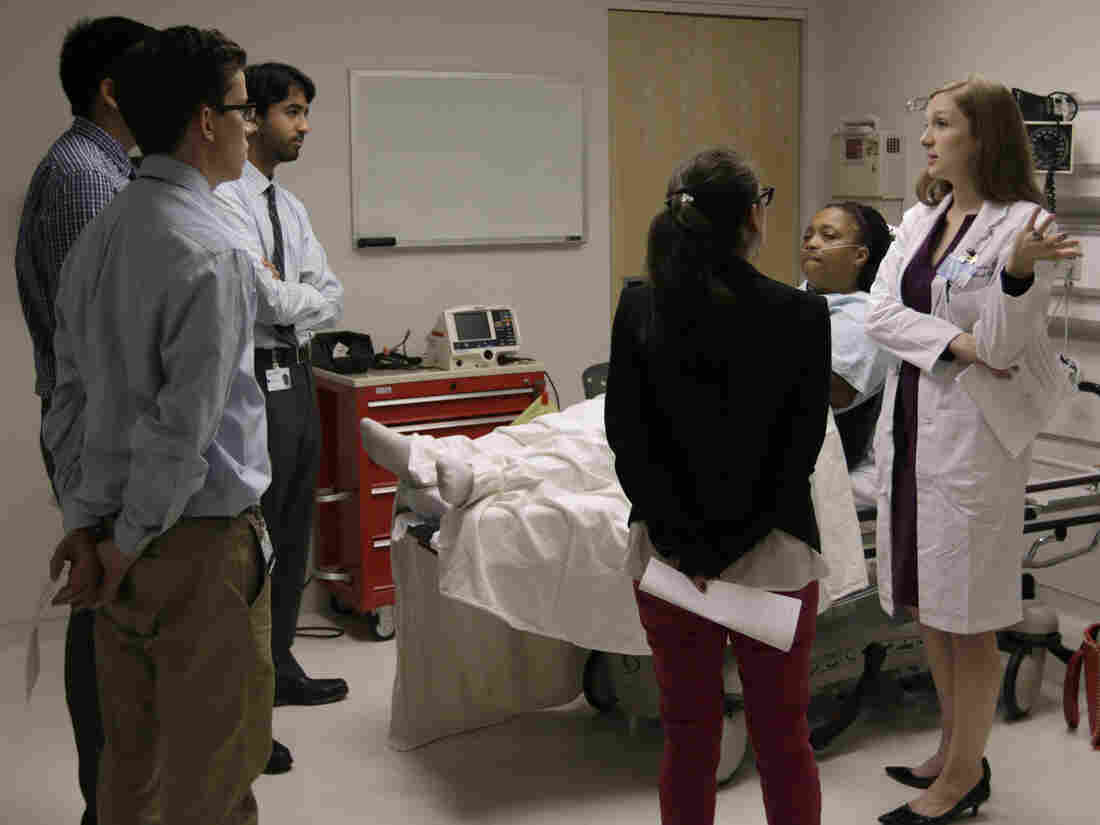 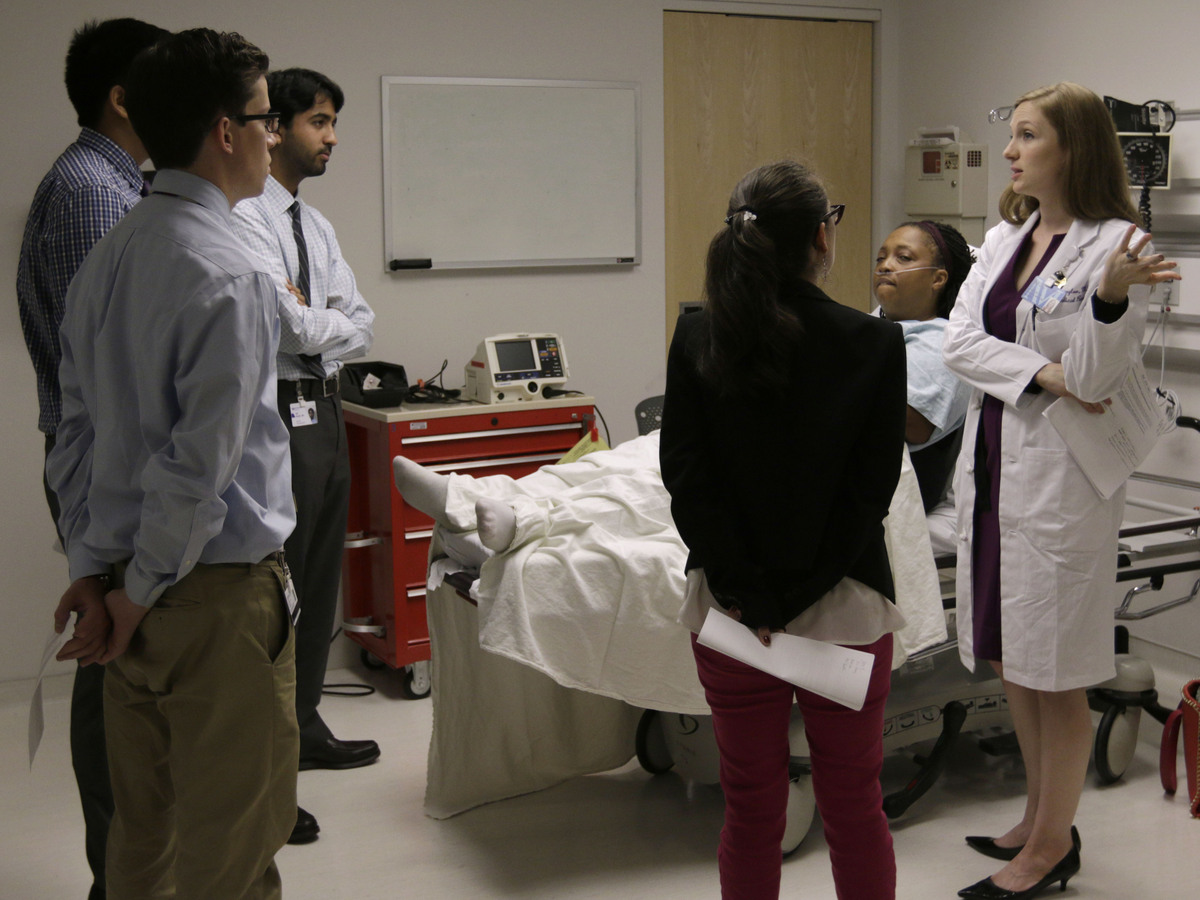 An influential report that urges sweeping changes in how the federal government subsidizes the training of doctors has brought out the sharp scalpels of those who would be most immediately affected.

Report Says Big Changes Are Needed In How Doctors Are Trained

The reaction also raises questions about the sensitive politics involved in redistributing a large pot of money –mostly from Medicare — that now goes disproportionately to teaching hospitals in the U.S. Northeast. All of the changes recommended would have to be made by Congress.

The report for the Institute of Medicine, released Tuesday, called for more accountability in the distribution of the federal funds earmarked for doctor training — $15 billion annually. About two-thirds of that cash comes from Medicare. The report also called for an end to providing the money directly to the teaching hospitals and to dramatically alter the way the funds are paid.

The money in question is for graduate medical education — the training of medical school graduates that's required before these interns and residents can be licensed to practice in any state.

"We recognize we are causing some disruption," said Gail Wilensky, a health economist and co-leader of the panel that produced the report. "But we think we are doing so in a thoughtful and careful way," including recommending phasing in the payment changes over 10 years.

Some of the major players in medical education don't see it that way, however.

"Today's report on graduate medical education is the wrong prescription for training tomorrow's physicians," the American Hospital Association said in a written statement, adding that the group's leaders were "especially disappointed" to see the suggestion that funding from Medicare should be shifted away from hospitals toward some clinics that even don't treat Medicare patients.

In its report, Wilensky's panel explained why it proposed shifting funding toward community clinics, writing, "Most, if not all residencies must train physicians to treat a wide range of patients — many of whom are under age 65 and not eligible for Medicare coverage."

The American Academy of Family Physicians welcomed the proposal to move funding away from a hospital-based system to more community-based training sites. "By giving these organizations more control over how they train residents, the financial investment will better align with the health needs of a community," the group's president, Reid Blackwelder, said in a statement.

But the broader-based doctor group, the American Medical Association, reacted negatively, saying: "Despite the fact that workforce experts predict a shortage of more than 45,000 primary care and 46,000 specialty physicians in the U.S. by 2020, the report provides no clear solution."

People talk about the third rail of politics as not touching Social Security. I have found that if you touch anything dealing with medical education you get bombarded.

Wilensky says that's because her panel didn't agree with studies that project there's going to be a shortage of doctors. Rapid changes in medical practice, she says — including the greatly increased use of nonphysician health professionals, such as physician assistants and nurse practitioners — might be enough to provide care to aging baby boomers and people now getting insurance coverage under the Affordable Care Act.

And even if a shortage does occur, the medical education system needs to better manage training since it now produces more specialists than primary care providers, and leaves major areas of the country with too few doctors, said Malcolm Cox, who recently retired from running the medical education program for the Department of Veterans Affairs. "Will an unregulated expansion produce the right physicians with the right skills in the right areas of the country?" he said at a panel discussion of the report.

Wilensky, who ran Medicare when Congress overhauled the physician payment system in the early 1990s, said the chances for making such changes depend very much on lawmakers from states that currently get less funding — which is most of them.

Given the fact that a disproportionate amount of current funding goes to institutions "in New York, New Jersey, and Massachusetts," Wilensky says she's surprised "that everyone else has tolerated this peculiar distribution of funds" for so long.

Whether change happens will depend on "whether some of the have-not states are willing to say 'wait a minute,' " she says.

The New York teaching hospitals, in particular, are well-known for their clout on Capitol Hill.

"They are fantastically great in terms of their protection of their turf," said Bill Hoagland, a longtime Senate Republican staffer and now senior vice president of the Bipartisan Policy Center. "People talk about the third rail of politics as not touching Social Security. I have found that if you touch anything dealing with medical education you get bombarded."

By far the most heated criticism of the report's recommendations came from the Association of American Medical Colleges, which represents medical schools and the teaching hospitals they affiliate with.

"While the current system is far from perfect, the IOM's proposed wholesale dismantling of our nation's graduate medical education system will have significant negative impact on the future of health care," said the group's president and CEO, Darrell Kirsh. The proposed redistribution of funding, he says, "will slash funding for vital care and services available almost exclusively at teaching hospitals, including Level 1 trauma centers, pediatric intensive care units, burn centers, and access to clinical trials."

Still, those supporting the IOM's recommendations say the way we train doctors is in major need of change. "The current system is unsustainable," said Edward Salsberg, a former top official at the Bureau of Health Workforce at the Department of Health and Human Services. "Health care is moving to the community, but our system of financing graduate medical education is tied to inpatient care."