Accessibility links
Caffeine Gives Athletes An Edge, But Don't Overdo It : Shots - Health News Studies show the caffeine in just a few cups of coffee enhances performance in a wide range of sports. But more isn't better, and concentrated caffeine can be lethal. 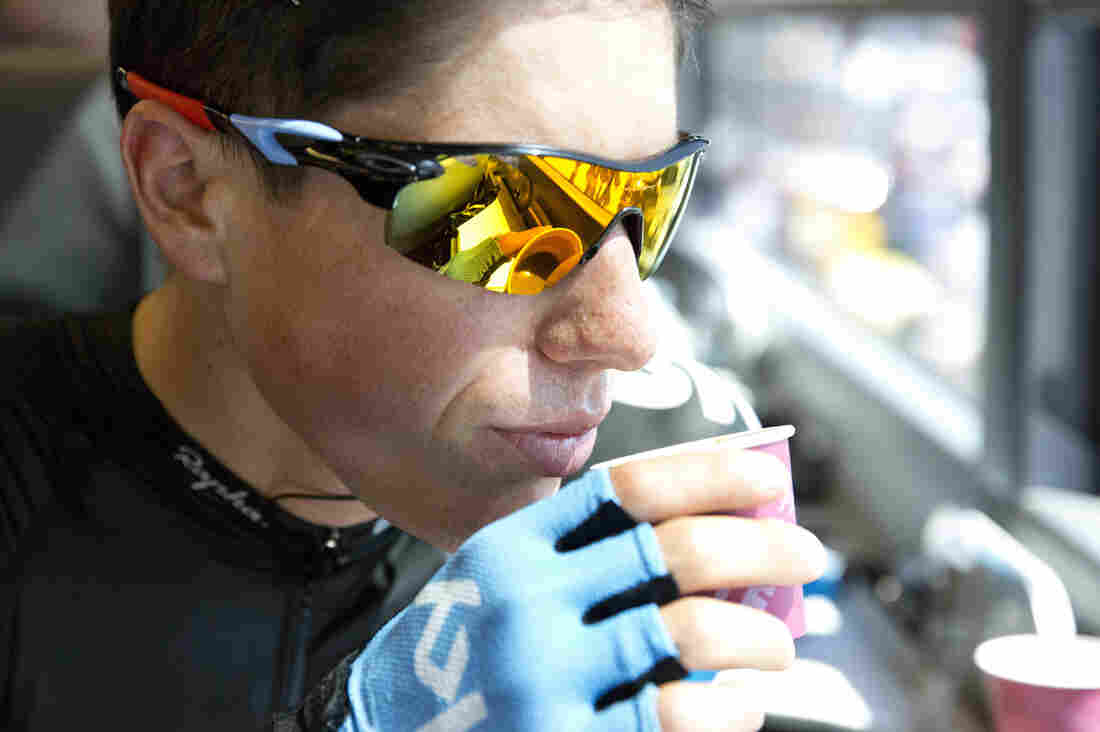 Peter Kennaugh of SKY Procycling enjoys an espresso ahead of first stage of the Tour de France 2013, in Corsica. Scott Mitchell/teamsky.com via Getty Images hide caption

Peter Kennaugh of SKY Procycling enjoys an espresso ahead of first stage of the Tour de France 2013, in Corsica.

After winning the Tour de France last Sunday, Vincenzo Nibali was tested for a bunch of performance-enhancing substances. But Nibali and his fellow competitors were welcome to have several cups of coffee (or cans of Red Bull), before their ride into Paris; caffeine is not on the World Anti-Doping Agency's banned list.

Of all the legal supplements an athlete could take, caffeine has the biggest effect on performance.

Still, the drug is definitely a performance booster. Just in the past few months, studies have shown that caffeine helps female volleyball players hit the ball harder and jump higher, rowers go farther, and cyclists go faster in a 20K time trial.

A large body of research shows caffeine helps in "pretty much every kind of endurance exercise," giving a performance advantage of 1.5 percent to 5 percent, says Mark Glaister, an exercise physiologist at St. Mary's University in Twickenham, U.K., and an author of the recent cycling study.

"Of all the legal supplements an athlete could take, it has the biggest effect on performance," he says. The suspicion is that caffeine increases the frequency or size of neural transmissions and suppresses pain, he says. It's not clear that it speeds very short sprints — Glaister is studying that — but it can help in any burst of activity that lasts longer than about a minute, he says.

Athletes see a benefit with a dose of between 3 to 6 mg per kg of body weight, which means that if a 140-pound cyclist were drinking an average cup of coffee, he'd get a lift after drinking about two to four cups. (Many brands of coffee have a lot more caffeine than the average of about 100 mg per cup, though.) It takes 30 to 60 minutes for caffeine levels to peak in the body and provide the biggest benefit, Glaister says.

But if just enough caffeine might make you pick up the pace a bit, too much is a really, really bad idea. Ingesting more than the recommended amount doesn't bring further improvements in performance, Glaister says, and even nondangerous doses can cause anxiety, sleeplessness and restlessness in some people. Worse, large amounts of the drug can be dangerous and even deadly. It's pretty hard to unintentionally get to a toxic dose by drinking coffee, soda or even taking caffeine pills, but it's easy to run into trouble with the powdered pure caffeine that's sold online.

Following the May overdose death of a teenager in Ohio, the Food and Drug Administration issued a warning about powdered caffeine, saying it's impossible to accurately measure it with your standard kitchen equipment; 1 teaspoon is equivalent to 25 cups of coffee. Too much caffeine can speed the heart and cause seizures and death, the FDA says.

The NCAA has a cap on acceptable caffeine levels in athletes, but the World Anti-Doping Agency removed caffeine from its banned list in 2004. (The agency still monitors levels in athletes to track general usage patterns.) Researchers say the drug is metabolized at different rates by different people, making it tough to rely on a pee test to determine exactly how much an athlete has consumed. And given caffeine's presence in so many products, it's just too difficult for athletes to avoid the drug in the real world, even if they aren't trying to cheat. "It's ubiquitous," says Glaister.