Accessibility links
Interval Training While Walking Helps Control Blood Sugar : Shots - Health News Sure, you know that walking is a simple, low-impact way to get exercise. But did you know that adding faster intervals to the walk could help control blood sugar levels? 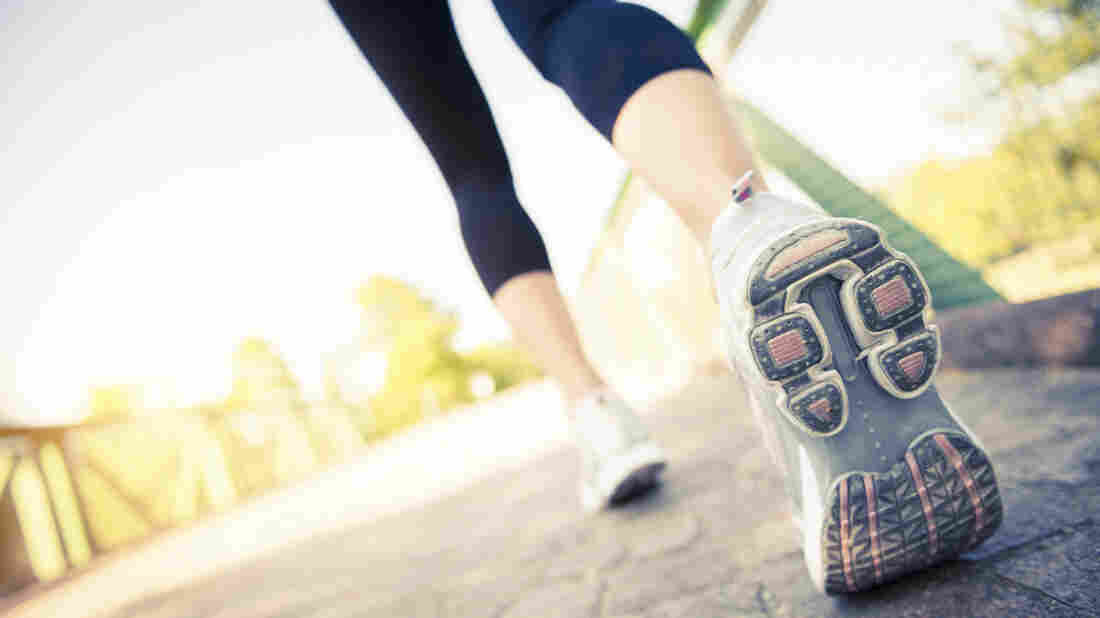 Lots of high-performance athletes use interval training to maximize their fitness.

From runners to cyclists to boot-camp fanatics the strategy involves alternating between periods of high-intensity and lower-intensity aerobic training.

Now, a study published in the journal Diabetologia finds that interval training may help the millions of people with Type 2 diabetes and prediabetes who are trying to control their blood sugar.

And the type of exercise involved? Taking an hourlong walk each day outdoors or on a treadmill.

As part of the study, researchers enrolled about 30 volunteers with Type 2 diabetes who were in their late 50s and early 60s.

The volunteers were divided into groups. One group was instructed to walk three minutes briskly, followed by three minutes at a more restful pace, and repeat that process for an hour.

Another group walked at a continuous pace for the same amount of time.

A third group, a control group, kept up normal routines, which didn't include daily exercise.

"What we expected to see ... was that both exercising groups would have an improvement in their glucose [or blood sugar] control," says study author Thomas Solomon, an associate professor at the University of Copenhagen who studies how exercise affects glycemic control.

But that's not what happened.

Why Fat Grizzlies Don't Get Diabetes Like We Do

The interval walkers did improve. Their glucose disposal — the ability to move sugar out of the circulating bloodstream and into parts of the body where it can be used as fuel — improved by 20 percent compared with the nonexercising group. And their hemoglobin A1C levels, a longer-term measure of blood sugar, dipped slightly too.

But the steady-paced walkers saw no improvement at all.

"This was somewhat surprising, considering that they were doing one hour of exercising a day for four months," says Solomon.

So what explains the benefits of interval walking? It's not exactly clear, but there's a leading theory.

"It's this switch between the intensities that we think is critical here," says Solomon. "You're able to work hard, and then rest hard ... rather than just walking at a fixed pace."

And during the high-intensity bursts, your muscles need more fuel in the form of glucose.

He explains that our muscles are the No.1 consumer of blood sugar in our bodies.

So, when we do things such as short bursts of high-impact aerobic activity, "you're pulling excess sugar out of the blood, which results in healthier blood sugar levels," Church says.

This study is small, but the findings match other research on intervals, which find benefits that seem to go beyond better blood sugar.

In a study published in Diabetes Care in 2013, which also compared interval walkers with continuous-paced walkers, Solomon and his colleagues found that the interval walkers lost more weight and lowered their cholesterol levels.

"There are a number of studies that have shown that when you increase the intensity [of aerobic exercise] in the form of doing intervals, there's additional benefits beyond just the calories burned," Solomon says.

There are still unanswered questions, he adds, such as can interval walking cut the risk of strokes or other health problems that are associated with diabetes?

"We really need to understand how this has an impact on the long-term health of these patients with diabetes," Solomon says.