Accessibility links
State Abortion Laws Face A New Round Of Legal Challenges : Shots - Health News State legislatures have passed laws that require doctors to have hospital admitting privileges to perform abortions. Some courts are now saying these laws are unconstitutional.

State Abortion Laws Face A New Round Of Legal Challenges

State Abortion Laws Face A New Round Of Legal Challenges 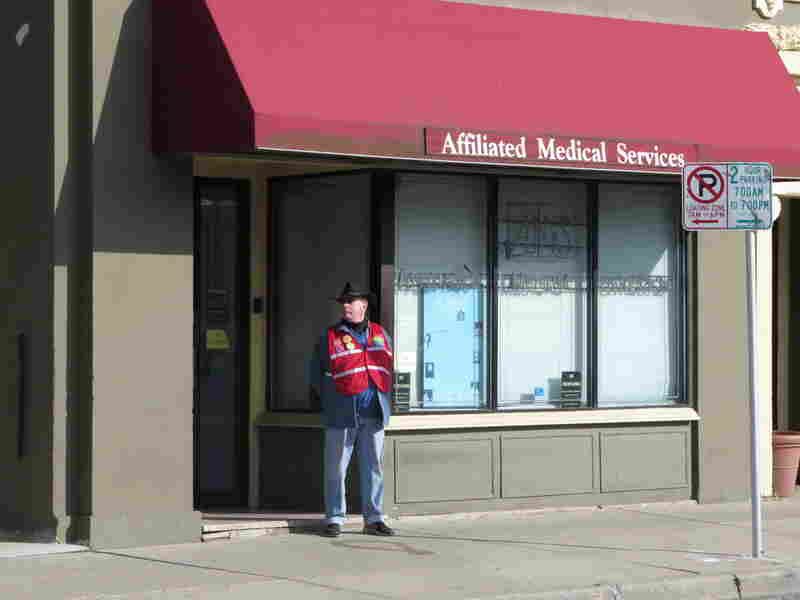 A volunteer escort waits outside a clinic that provides abortions in Milwaukee. Wisconsin is one of many states that have passed laws requiring doctors to have hospital privileges if they perform abortions. Dinesh Ramde/AP hide caption

Even if you're trying, it's tough to keep score of what's happening with various lawsuits challenging some state abortion laws.

States led by anti-abortion governors and legislatures have been passing a broad array of measures over the past few years aimed at making the procedure more difficult for women to obtain.

About two dozen states enacted 70 such measures in 2013, according to the Guttmacher Institute. Those laws range from imposing waiting periods to requiring ultrasounds to limiting the use of the "abortion pill" mifepristone, or RU486.

The latest set of laws to be challenged in court have to do with requiring physicians who perform abortions to have admitting privileges at a nearby hospital.

For example, a federal district court judge in Alabama this week struck down as unconstitutional a portion of state law requiring physicians who perform abortions to have admitting privileges. Last week, a federal appeals court panel struck down a similar law in Mississippi. And a third law of the same type is awaiting a ruling in Wisconsin.

All these laws, as well as a law in Texas that a federal appeals court allowed to take effect last November, have one thing in common: They represent the latest fight over efforts to make abortion either less available (according to one side) or safer (according to the other).

Here are some frequently asked questions about the laws and the lawsuits surrounding them.

What are admitting privileges?

Admitting privileges are the right of a physician to admit patients to a particular hospital and to provide specific services in that facility. For a physician to be granted privileges, a hospital generally checks the individual's medical credentials, license and malpractice history.

Many hospitals also require physicians to admit a minimum number of patients to the hospital each year before they will grant or renew privileges. Others require the doctor to live within a minimum distance of the hospital.

How do admitting privilege requirements relate to abortion?

Supporters of the laws say it's about safety. "Once a physician assumes the responsibility for overseeing the provision of a medical procedure, there's an obligation on the physician to follow the care through to its ultimate conclusion," including any emergencies that might occur, says Ovide Lamontagne, general counsel of the anti-abortion group Americans United for Life.

Lamontagne also said the process for doctors to obtain hospital privileges is another safety check. "Admitting privileges are sort of the profession's way of validating the credentials of a provider," he said.

Opponents of the laws, however, say they are more about making abortion less available.

"Admitting-privileges legislation would impose stricter requirements on facilities where abortions are performed than on facilities that perform much riskier procedures," says Jeanne Conry, former president of the American College of Obstetricians and Gynecologists.

"As an example, the mortality rate associated with a colonoscopy is more than 40 times greater than that of abortion," she says, yet gastroenterologists who perform such procedures outside of the hospital setting do not face similar requirements "in the context of safety."

And opponents point out that most abortion providers cannot meet the number-of-admissions standard for gaining privileges because so few of their patients need hospital care.

How many states have passed admitting-privileges laws?

According to the Guttmacher Institute, which tracks reproductive health issues, 15 states require abortion providers "to have some affiliation with a local hospital," while 11 specifically require admitting privileges. Many of those laws are not in effect, however, having either been blocked by courts or being too new (Louisiana and Oklahoma) to have taken effect.

In some states with admitting-privileges laws, physicians have been able to gain hospital access. In North Dakota, for example, a court case ended earlier this year when physicians at the state's only abortion-providing clinic were granted privileges at one hospital.

What have the courts said about the laws?

Under current Supreme Court precedent, states cannot limit abortion in a way that imposes an "undue burden" on a woman's ability to obtain an abortion.

But different courts have had dramatically different responses to admitting-privileges requirements for abortion providers.

In Texas, a district court judge last fall found the admitting-privileges portion of that state's omnibus abortion restriction law unconstitutional. Then in May, a three-judge panel of the 5th Circuit Court of Appeals reversed that lower court ruling.

"Even if we were to accept that both clinics in the Rio Grande Valley were about to close as a result of the admitting-privileges provision ... this finding does not show an undue burden," said the opinion written by Judge Edith Jones.

The opinion also noted that the lower court's finding that " 'there will be abortion clinics that will close' is too vague."

Since the ruling, the last remaining clinics in the Rio Grande Valley did close. That left San Antonio, which is up to 250 miles away, the closest city where legal abortions can be obtained for women in more than 20 Texas counties.

Texas now has fewer than half as many clinics that provide abortions as it had before the law took effect, and that could drop even further depending on the outcome of a trial that began this week regarding another provision of the Texas law.

That provision requires abortion-providing clinics to meet the same facility standards as "ambulatory surgical centers" that do more complex surgeries. Those standards include such details as minimum door widths and allowable types of materials to be used in floors and ceilings.

In Mississippi, a different set of judges from the 5th Circuit Court of Appeals ruled late last month that the state's admitting-privileges law could not take effect because it would have forced the closure of the last remaining abortion-providing clinic in the state.

"Mississippi may not shift its obligation to respect the established constitutional rights of its citizens to another state," wrote Judge E. Grady Jolly in the opinion.

Meanwhile, Alabama District Court Judge Myron Thompson cited the inability of doctors in the state's abortion-providing clinics to be able to get admitting privileges at nearby hospitals in his Aug. 4 opinion striking down that state law.

"The evidence compellingly demonstrates that the requirement would have the striking result of closing three of Alabama's five abortion clinics," Thompson wrote in his 172-page opinion. "If this requirement would not, in the face of all the evidence in the record, constitute an impermissible undue burden, then almost no regulation, short of those imposing an outright prohibition on abortion, would."

A trial over Wisconsin's admitting privileges requirement ended in June. A decision in that case is expected soon.