Accessibility links
Hey, You've Got Mites Living On Your Face. And I Do, Too : Shots - Health News If you're grossed out by the idea that tiny relatives of scorpions are living in the pores of your nose, you're not alone. But everybody's got Demodex mites, a study finds. And they're kind of cute.

Hey, You've Got Mites Living On Your Face. And I Do, Too

Hey, You've Got Mites Living On Your Face. And I Do, Too 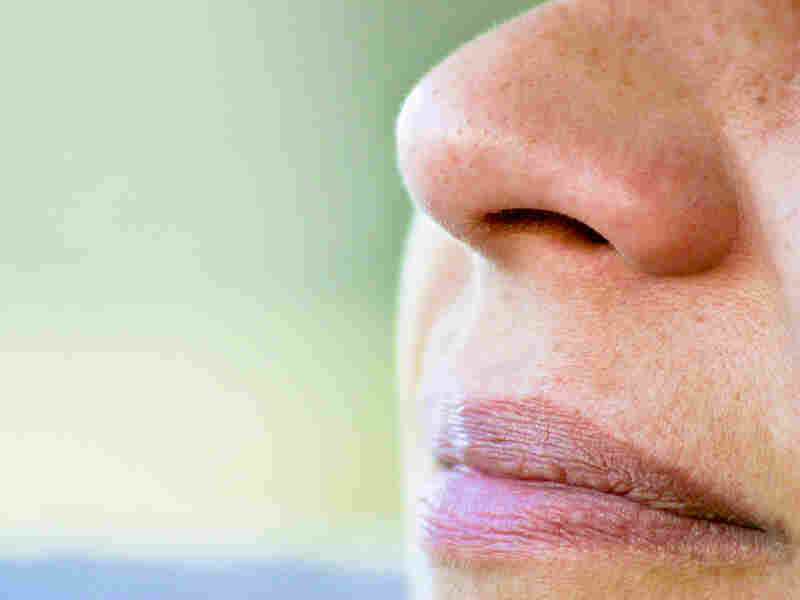 Want to find your personal posse of Demodex mites? Gently scrape the pores on the sides of your nose. Juergen Peter Bosse/iStockphoto hide caption 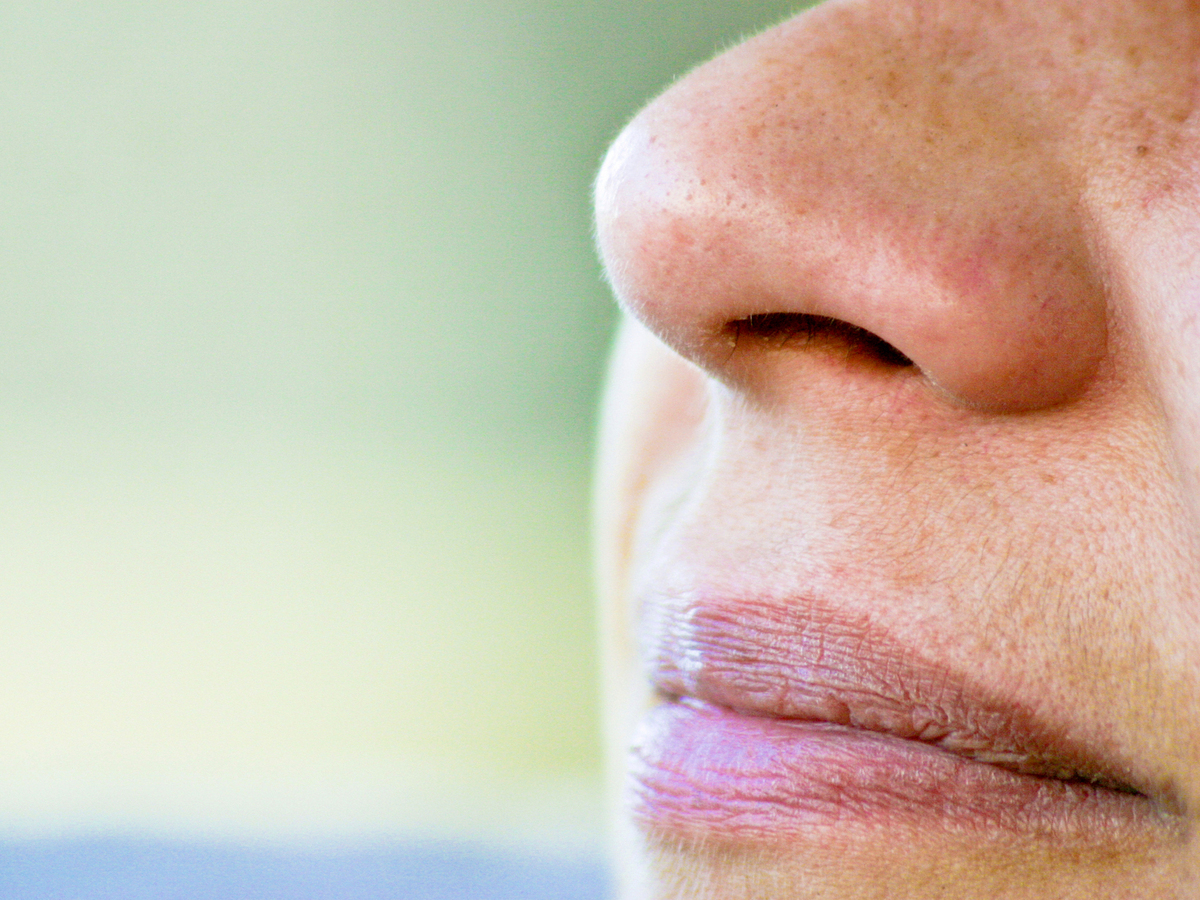 Want to find your personal posse of Demodex mites? Gently scrape the pores on the sides of your nose. 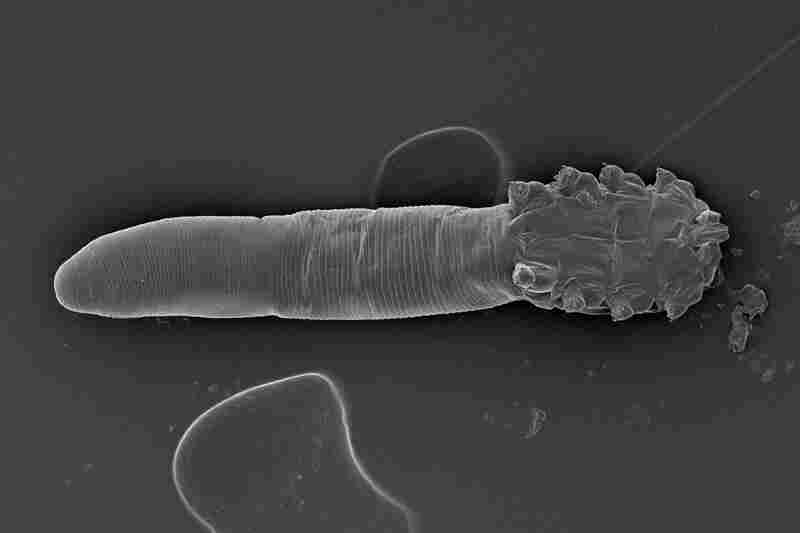 You can't see them, but they love living on our faces. A microscopic image of a Demodex mite. USDA Confocal and Electron Microscopy Unit hide caption 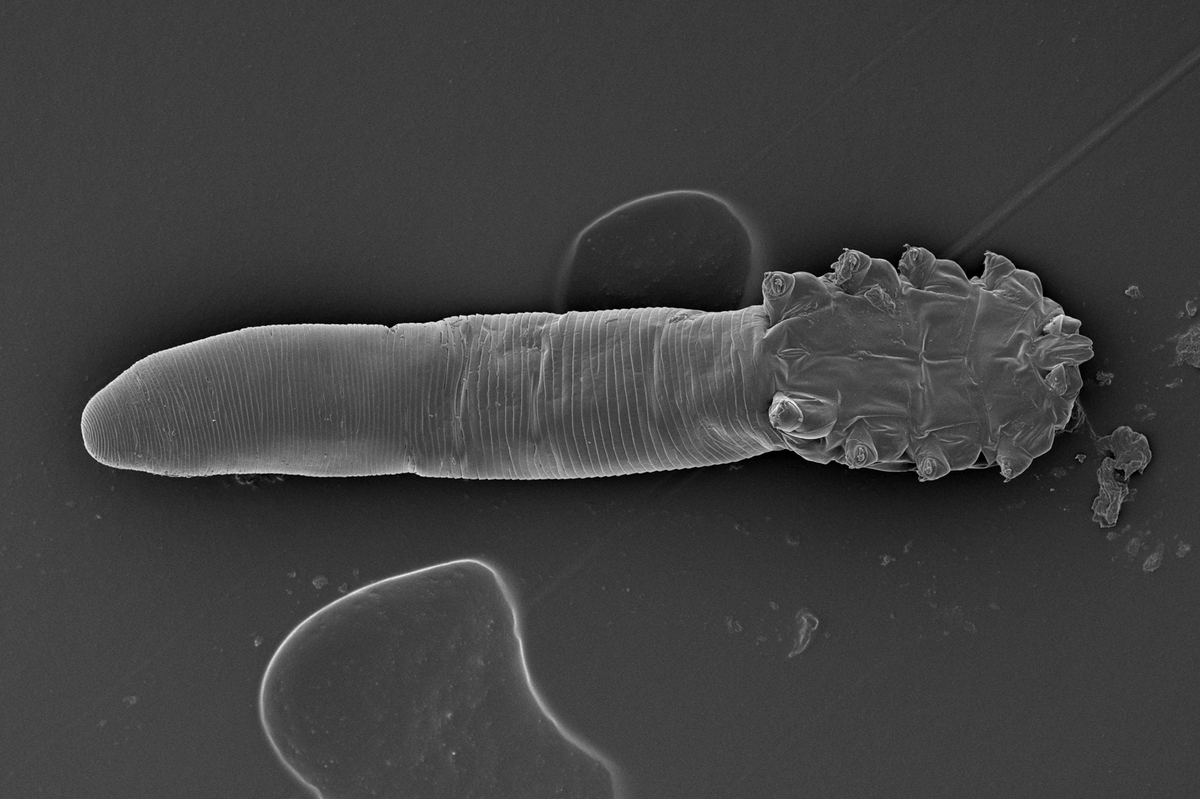 You can't see them, but they love living on our faces. A microscopic image of a Demodex mite.

When Megan Thoemmes first found a tiny critter living in the pores of her nose, she was disgusted.

"The first time I found one on my face I didn't sleep for four nights," says Thoemmes, a graduate student at North Carolina State University.

But she's made peace with her Demodex mites, not only accepting that the microscopic arthropods are hers for life, but conducting a study that finds that everybody else has them, too.

"They're actually pretty cute," Thoemmes tells Shots. "With their eight little legs, they look like they're almost swimming through the oil."

That's the oil from the sebaceous glands on your face.

Scientists have known for more than a century that Demodex mites like to hang out on human skin. More recently, the creatures have been investigated as a potential cause of the skin disorder rosacea. But the thought was that just a small minority of people played host to the translucent critters.

Boy were they wrong about that.

Thoemmes and her colleagues had gotten good at using little laboratory spatulas to scrape the sides of people's noses at citizen science events in the Raleigh_Durhan, N.C., area, collecting a bit of the goop inside pores that the mites like to live in. They tested hundreds of people and found mites 14 percent of the time.

But that number seemed suspiciously low, so the scientists hit on the idea of looking for mite DNA on human faces, rather than the mites themselves.

In DNA tests of 29 people, 100 percent of those over age 18 carried DNA from Demodex mites. The results were published Wednesday in the journal PLOS ONE. Tests on more people have also come up with the same 100 percent number, Thoemmes says.

Makes you feel kind of itchy, doesn't it?

Scientists don't know how the mites spread among humans; one theory is that they're passed on from mother to child while breast-feeding. Young people are much less likely to have them, while they've been found on almost all cadavers. The mites probably crawl on our faces at night, when it's dark.

In a way, that 100 percent number is strangely comforting. Not only do I have face mites, but so does Benedict Cumberbatch. And Ruth Bader Ginsburg. And Beyonce.

"It's like having friends with you all the time," Thoemmes says. "Realizing that everyone has them and they're likely not causing any problems, it's pretty reassuring."

Thoemmes and her colleagues are pretty excited about using human mites and their DNA to figure out how people have migrated historically and how we've interacted with animals. One of the two species of human mites, Demodex brevis, is related to the dog mite that can cause mange.

Indeed, Thoemmes just got back from mite-hunting in Mexico and Peru. "We want to get a lot of samples from humans around the world, to see how that genetic diversity is falling out and have a fuller picture of what is happening,"