Accessibility links
Texas Law Could Lead To Closure Of Clinics That Offer Abortions : Shots - Health News A Texas law would require doctors' offices and clinics that perform abortions to comply with regulations that apply to ambulatory surgical centers. The change could lead to a loss of services.

Texas Law Could Lead To Closure Of Clinics That Offer Abortions

Texas Law Could Lead To Closure Of Clinics That Offer Abortions 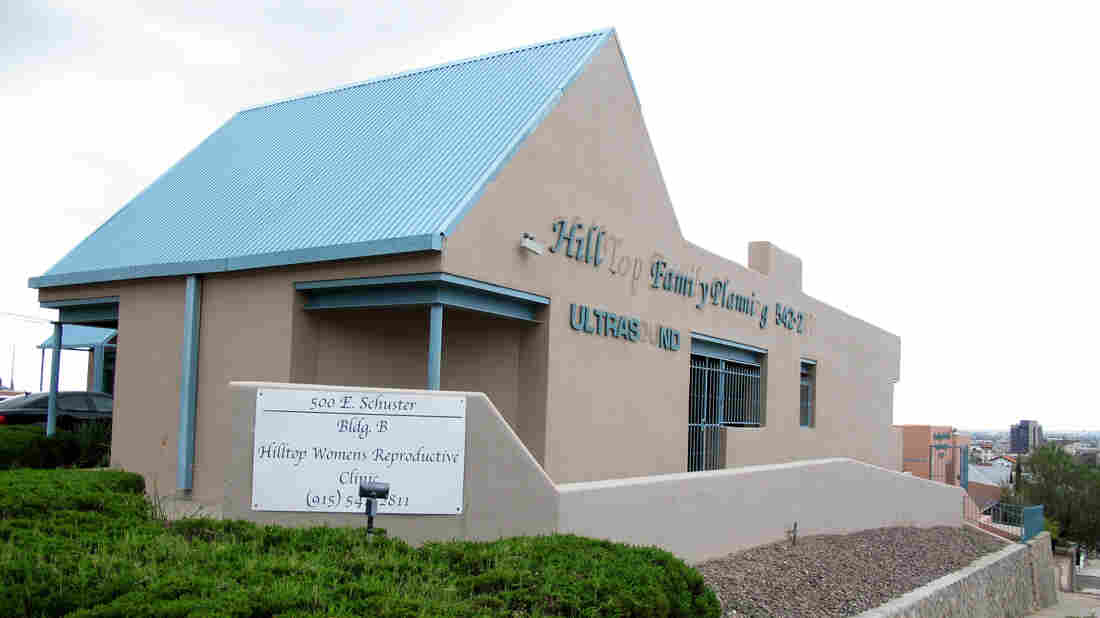 The Hilltop Women's Reproductive Clinic in El Paso, Texas, is expected to close if a state law is upheld by a federal judge. Juan Carlos Llorca/AP hide caption

A federal judge in Austin, Texas, will issue a decision in the next few days about whether clinics that perform abortions in the state must become outpatient surgery centers.

The Texas law is part of a national trend in which state legislatures seek to regulate doctors and their offices instead of women seeking abortions.

The laws are collectively known as TRAP laws, for "Targeted Regulation of Abortion Providers."

"They do just that," says Rochelle Tafolla, a spokeswoman for Planned Parenthood Gulf Coast in Houston. "They 'trap' providers into very tight, medically unnecessary restrictions."

The Texas law that passed in 2013 requires doctors who perform abortions to first obtain admitting privileges at a hospital within 30 miles. Many clinics, especially rural ones, found it difficult to comply with that rule by the November deadline. The number of Texas clinics that perform abortions has dropped from 41 to 20.

Now the law's final rule requires doctors' offices to meet the standards of ambulatory surgical centers, including an array of rules that govern hallway widths, the presence of showers and lockers, and heating and cooling specifications. The rules also require conformance with other construction codes that can cost millions of dollars.

The rule goes into effect on Labor Day, unless federal Judge Lee Yeakel of the Western District in Austin issues an injunction to stop it. He is expected to issue a decision by Friday. If he stops the surgery center rule, Texas Attorney General Greg Abbott could quickly appeal to reinstate it.

One Houston doctor, who asked not to be identified because he fears being targeted by abortion protesters, says he will have to stop providing abortions if the final rule goes into effect.

Abortions are a small but important part of his practice: He delivers babies, gives wellness exams, performs gynecological surgery and even offers tummy tucks.

"Abortion is part of what we're trained to do as obstetricians-gynecologists. That's the medical point of it," he says. "When the politicians get into the mix, it becomes a completely different story."

Planned Parenthood's Tafolla says only eight clinics in Texas would meet the newest requirement, and they're all in the major cities: two are in Houston (including Planned Parenthood Gulf Coast), two in San Antonio, two in Dallas, and one each in Fort Worth and Austin.

Women in East Texas, the Rio Grande Valley and west of San Antonio would have to drive hundreds of miles for multiple visits, because a 2011 law put in place a 24-hour waiting period following a mandatory ultrasound, plus follow-up visits for women using the abortion pill.

The Guttmacher Institute, a research organization that studies reproductive rights, says TRAP laws really took off in 2010. Twenty-six states now have them.

Melissa Conway, spokeswoman for Houston-based Texas Right to Life, says if the number of abortions and the number of clinics drop in Texas, that's something she's glad about, but it wasn't the intent of the law. She says the regulations are about making abortion safer, so abortion providers should invest in the required upgrades.

"The choice to have fewer clinics comes down to the abortion providers," Conway says. "If they choose to have disregard for the health of women, and the safety standards, which are practical, common-sense and best standards, that's their choice. But that points highly to the fact that they care more about their bottom line than they do their patient care."

The position of the American College of Obstetricians and Gynecologists is that "what those laws do is they limit women's access and expose women to increased risk by not enabling them to have a procedure near where they live," says ACOG CEO Dr. Hal Lawrence.

Lawrence says low-income women can't afford to travel, and may try to self-induce an abortion or carry an unwanted pregnancy to term. He adds that other outpatient procedures, such as colonoscopy, carry a fatality risk that is 40 times greater than first-trimester abortion, yet colonoscopy does not receive the same unwarranted scrutiny from lawmakers.

Tafolla says legislatures are passing TRAP laws because laws targeting demand for abortion were ineffectual. Other "demand-focused" laws include mandatory ultrasounds, a requirement that the patient listen to the fetal heartbeat, and waiting periods before abortions.

Legislators who oppose abortions "thought they could reduce abortion by focusing on women and shaming them," she says. "Now they're focusing on the providers and doing everything they can to shut them down."