Accessibility links
Johnson & Johnson Pushes Ahead With Ebola Vaccine : Shots - Health News The vaccine would target the Zaire species of Ebola that's now spreading through West Africa. The vaccine worked well in tests on macaque monkeys, and it could be tested in humans starting in 2015. 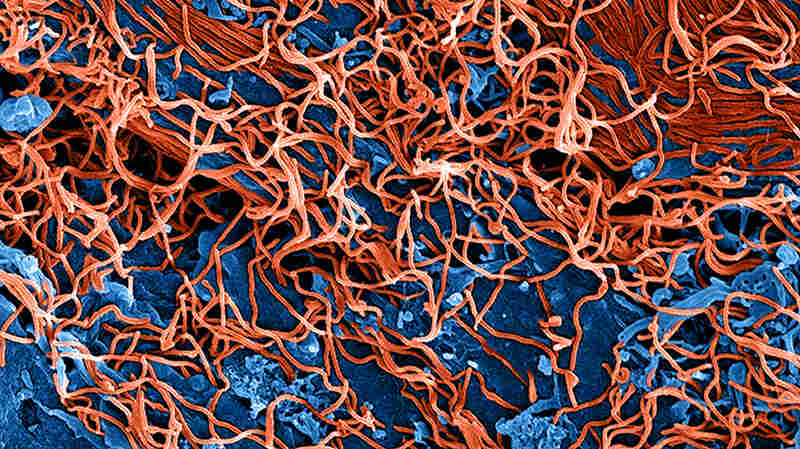 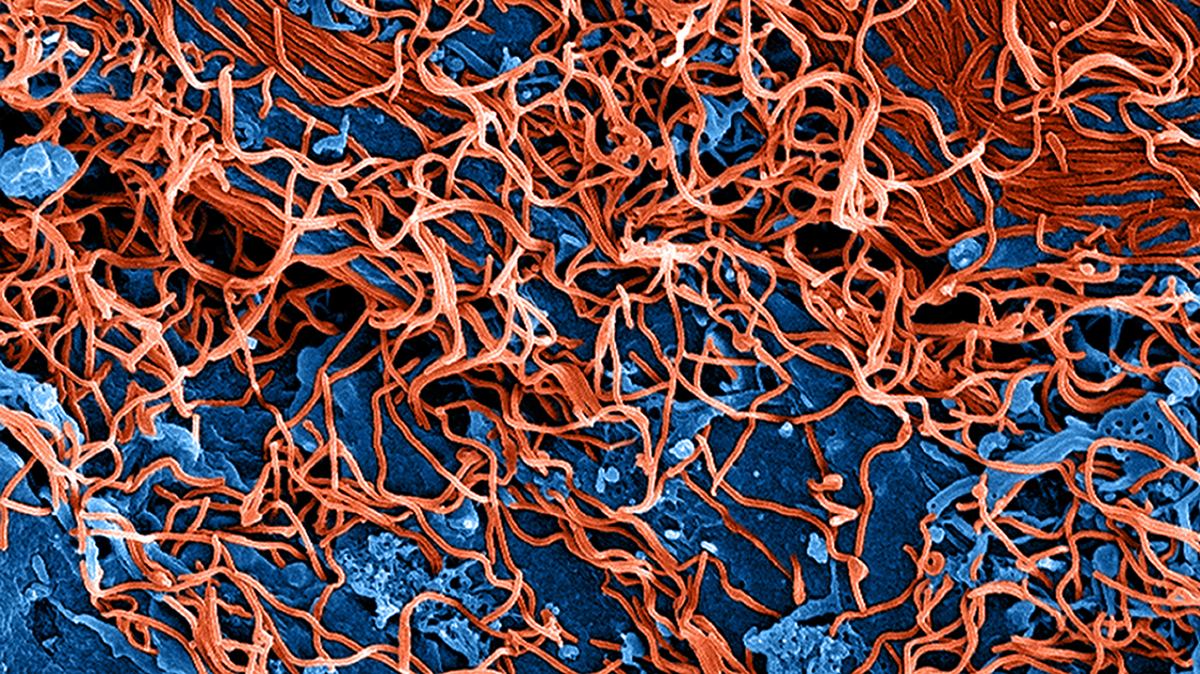 Ebola virus particles cling to a cell from an African green monkey.

All of a sudden there's some movement in the development of vaccines against Ebola.

Johnson & Johnson said Thursday that the company is speeding up work on its part of an experimental two-shot vaccine being developed in collaboration with the National Institute of Allergy and Infectious Disease. J&J's Crucell unit would make a vaccine that would prime the immune system. A second shot from a company called Bavarian Nordic would be given later to boost the immune response.

The vaccine combination would target the Zaire species of Ebola that's now spreading through West Africa. The J&J vaccine worked well in tests on macaque monkeys, the company said. If all goes as planned, the vaccine could be tested in humans starting in the first half of 2015.

The J&J vaccine has been a long time coming. The scientific work involving Crucell, now a J&J subsidiary, and NIAID, part of the National Institutes of Health, dates back to 2002.

The initial goal was a vaccine that would simultaneously protect against two Ebola species and Marburg, a related hemorrhagic fever. But a multipronged vaccine like that would take more time to refine and test, so J&J has pared down the vaccine goal to move up the start of human tests by a year.

"We will only focus on the Zaire strain as a target," Dr. Paul Stoffels, J&J's chief scientific officer, told Shots. "That allows us to accelerate the vaccine development."

Experimental Ebola Vaccine Will Be Put To Human Test

The J&J approach has some particulars that set it apart. The Crucell shot makes use of a modified human cold virus to get bits of Ebola's genetic material into cells inside the human body. Once there, the noninfective bits of Ebola trigger an immune response. Similarly, the Bavarian Nordic shot uses a weakened relative of the smallpox virus to carry Ebola genetic material into human cells.

While Ebola versions of these vaccines are new, the viral carriers being used have been tested previously for safety in human, Stoffels said. "Of course, we still need to build in the Ebola piece. We haven't tested that in the clinic yet," he said. "But the vector, which is the carrier for the vaccine, is safe. And, therefore, we think and we hope that the vaccine will be safe as well."

This week, as planned, NIAID began human testing of a different Ebola vaccine being developed in collaboration with GlaxoSmithKline. An NIAID spokeswoman said the first doses have been given to two volunteers.

Also, an experimental Ebola vaccine licensed to NewLink Genetics Corp. by the Public Health Agency of Canada is expected to begin human testing soon. The Defense Department funded that work.

The World Health Organization convened a two-day meeting in Geneva Thursday to talk about how to evaluate and when to use the experimental treatments and vaccines now in the works.

"We will do our part," J&J's Stoffels said. "But we can't do this without significant collaboration. We believe many options are needed."