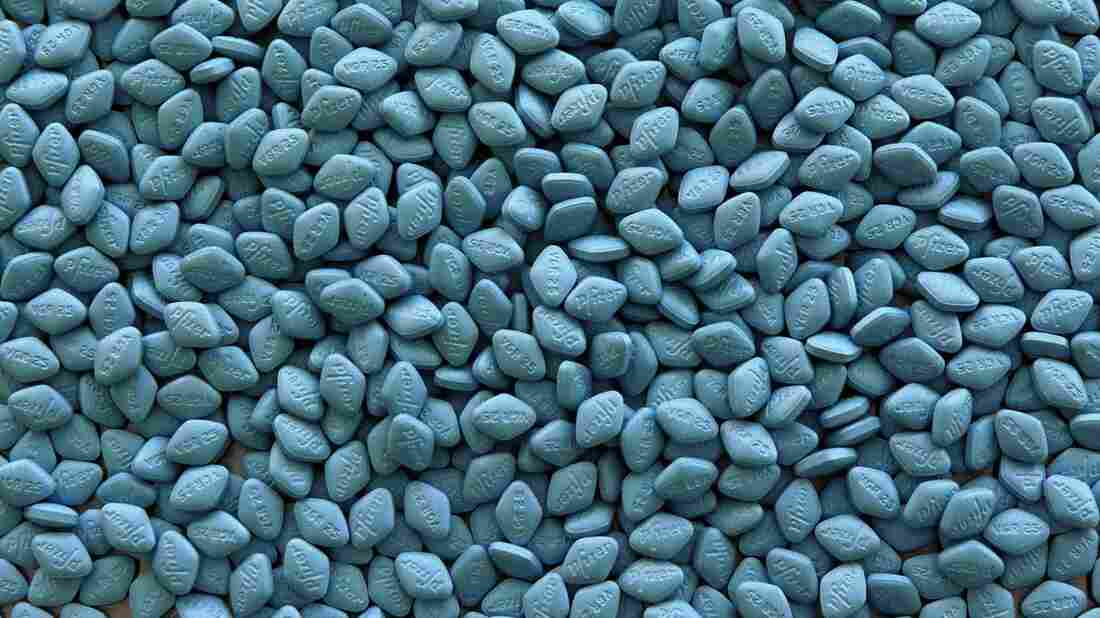 Mountains of "little blue pills" and their chemical kin have transformed the way many people think about sex and aging. Raphael Gaillarde/Gamma-Rapho/Getty Images hide caption

The lives of older men have changed in a significant way since 1998, or at least their sex lives have changed. That's the year Viagra was introduced. Cialis and Levitra followed a few years later.

The once taboo subject of erectile dysfunction is now inescapable for anyone who watches TV. Late-night comedians continually mine the topic. By 2002, Jay Leno had told 944 Viagra jokes, according to the Wall Street Journal. We couldn't independently verify that number. Actually, we didn't try.

The drugs have been pitched by former Sen. Bob Dole, Chicago Bears coach Mike Ditka and dozens of attractive, anonymous actors canoodling on sofas and lounging in bathtubs.

A retired Marine Corps pilot named Mike — he asked us just to use his first name — says his own experience wasn't much different from the scenes on TV.

"It was fantastic," he says.

Mike's been married for 47 years. He's been using either Viagra or Cialis for the past 10.

"I was having some 'issues,' " Mike explains. So he discussed the problem with his son, who's a doctor and suggested Mike try the drugs.

Mike's wife was all for it, too, and he says they've lived happily ever after. "I believe my wife and I became closer," he says, because a source of anxiety vanished from their relationship.

Before Viagra, relieving that anxiety required measures that could cause plenty of anxiety themselves, says Dr. Edward Schneider, a professor of gerontology, medicine and biology at the University of Southern California. They're "just medieval, these things," he says.

For example, there's the vacuum pump, "where you essentially cause an erection by creating a partial vacuum around the penis, drawing blood into the penis," Schneider explains. He's never tried it himself, he says, but "I imagine it's awful."

All these methods are still in use, explains Schneider, because some men can't take the oral medications. But the men who can take them have made Viagra, Cialis and Levitra wildly successful: The three drugs took in more than $2.5 billion last year.

Dr. Jacob Rajfer, a urologist at UCLA Medical School, says there's another reason the drugs are so profitable: Erectile dysfunction "happens to all men."

Rajfer says this happens because after a man's prime reproductive years, smooth muscle — the type found within the walls of blood vessels and in the penis — starts to deteriorate. In fact years before Viagra hit the market, Rajfer helped identify nitric oxide as the chemical in the body that acts on smooth muscle and makes erections possible. Viagra-type drugs work by keeping nitric oxide from breaking down too quickly.

The drug is much more than the sum of its chemical parts — and its physiological effects, says a man named David, who also asked that we not use his last name. "It's something that gives that sense that intimacy can continue," he says. "You can feel less alone as a result."

David is 66 years old, a recently retired community college professor, and a widower. He's now in a new relationship.

"I was simply concerned at my age that I wasn't as capable as I wanted to be," he says. "And after I got the prescription I told her I had done that so that she would know.

And he says she was fine with it.

"Women have their own concerns as they age," says David. "She was also concerned about how we were going to be as older people making love."

With people living longer, David notes that he and the new woman in his life could spend 25 years together.

"I wanted to keep that intimacy as long as possible because I love this person and I expect to be with her for a long time," he says.

And now because of a little pill, being physically intimate with the woman he loves isn't something that will be lost to old age.