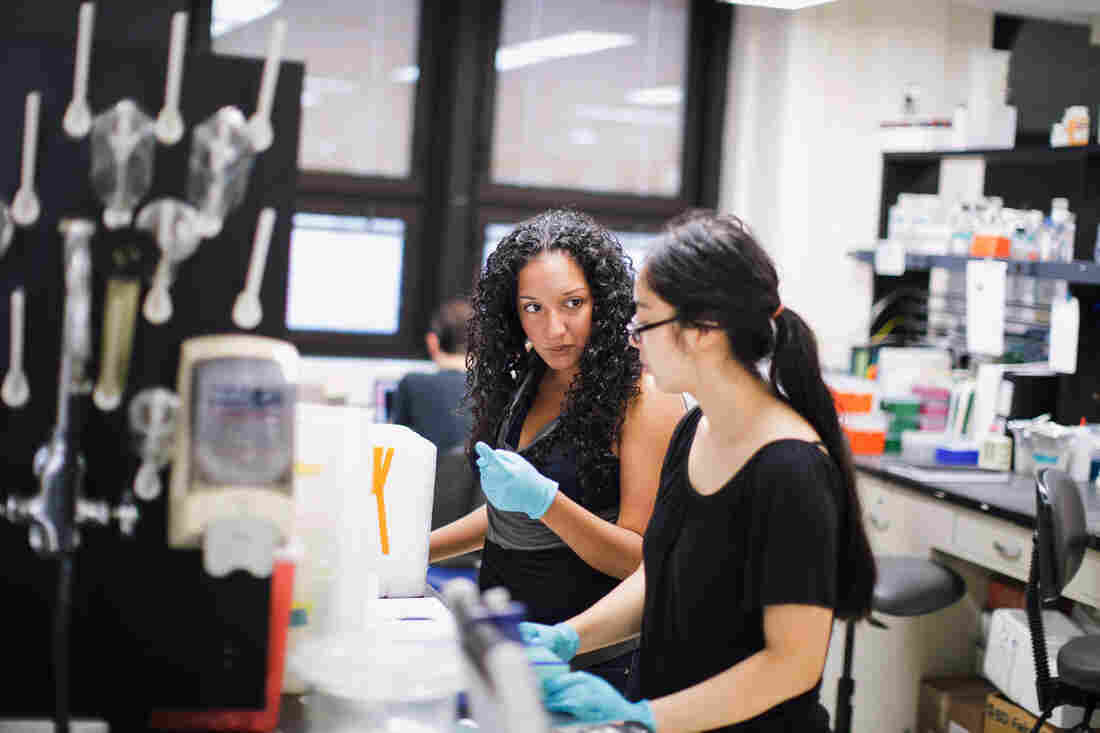 Victoria Ruiz (left), a postdoctoral fellow in immunology, works with Brianna Delgado, a high school student that she mentors, at the Blaser Lab, inside NYU's Langone Medical Center in New York, NY. Ramsay de Give for NPR hide caption 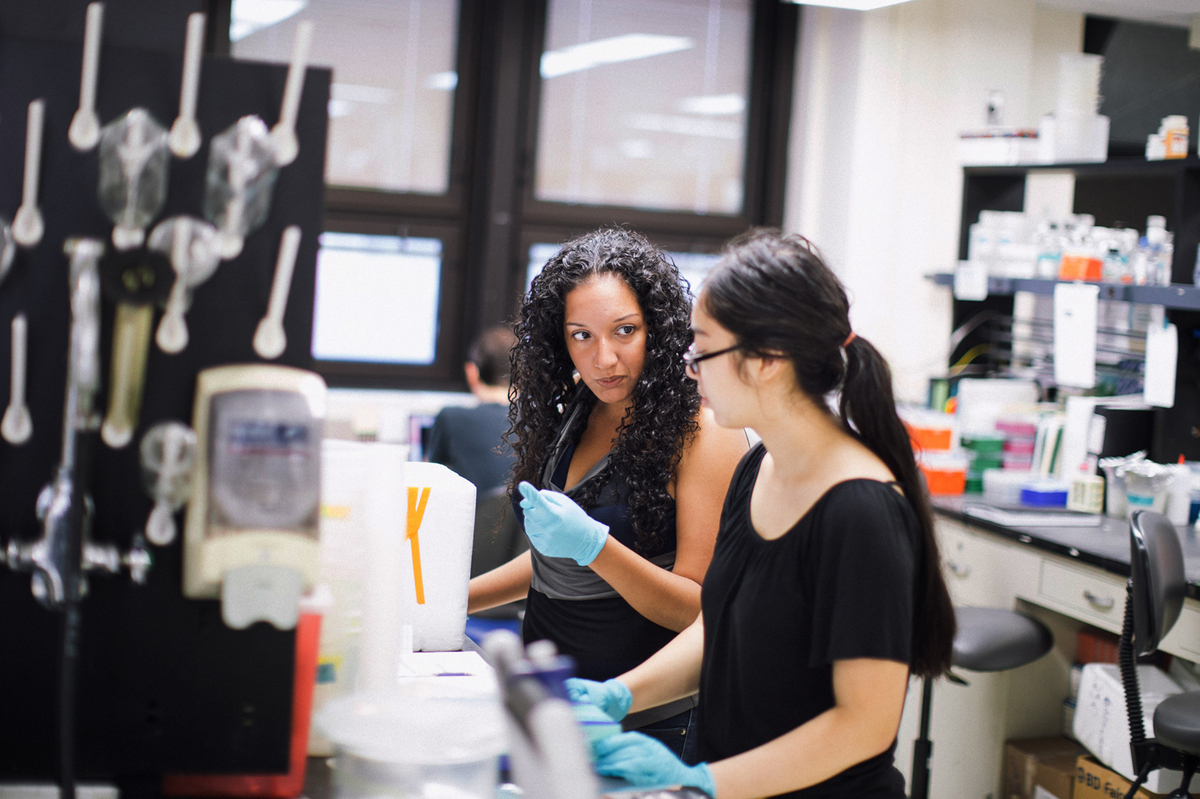 Victoria Ruiz (left), a postdoctoral fellow in immunology, works with Brianna Delgado, a high school student that she mentors, at the Blaser Lab, inside NYU's Langone Medical Center in New York, NY.

Ramsay de Give for NPR

Imagine a job where about half of all the work is being done by people who are in training. That's, in fact, what happens in the world of biological and medical research.

In the United States, more than 40,000 temporary employees known as postdoctoral research fellows are doing science at a bargain price. And most postdocs are being trained for jobs that don't actually exist.

Academic institutions graduate an overabundance of biomedical Ph.D.s — and this imbalance is only getting worse, as research funding from the National Institutes of Health continues to wither.

The funding squeeze presents an enormous challenge for young scientists like Vanessa Hubbard-Lucey, who is trying to make a career in biomedical research.

Hubbard-Lucey is 35 years old. After earning her Ph.D. a few years ago, she first worked as a research-technician in a cancer lab, then accepted a postdoc position at New York University's Langone Medical Center on Manhattan's East Side, working for a professor who is trying to understand the causes of inflammatory bowel disease. 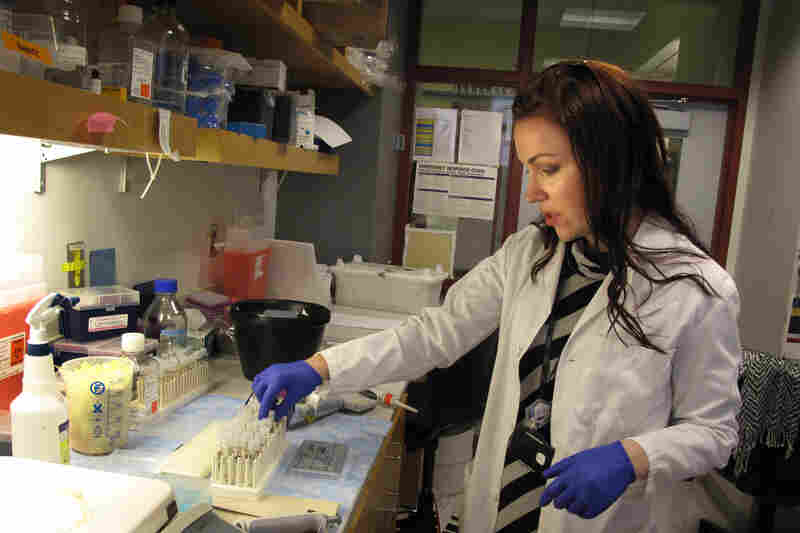 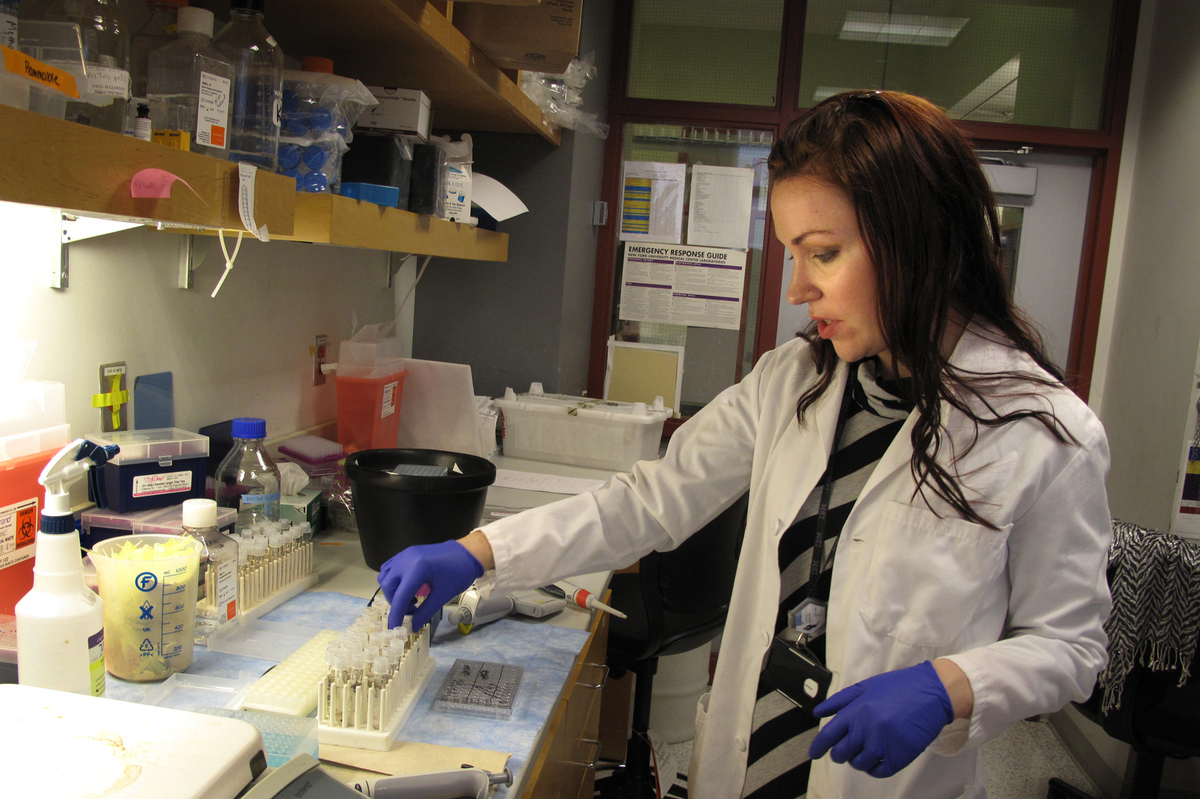 Vanessa Hubbard-Lucey is also a post-doc at NYU's Langone Medical Center. She works for a professor studying inflammatory bowel disease.

"By definition, a postdoc is temporary, mentored training where you are supposed to acquire professional [experience] in order to pursue a career of your own choosing," Hubbard-Lucey says, "the key word being temporary."

But increasingly these low-paying temporary jobs can stretch on for years. "Many people go on to do many postdocs," she says.

That's because if you want a career in academia, it's almost essential as a postdoc to make a splashy discovery and get the findings published in a top scientific journal. Hubbard-Lucey is working on an experiment that she hopes will be her ticket to a professorship — or at least to an interview for an academic job.

Whether she succeeds or not, she's part of a shadow workforce made up of highly qualified scientists who work long hours for comparatively little pay, considering their level of education: about $40,000 a year.

American science couldn't survive without this shadow labor force of some 40,000 postdocs. But only about 15 percent will get tenure-track jobs, heading a lab like the one where Hubbard-Lucey works today. This was not at all what she expected when she started down this path a decade ago.

"I remember [an adviser] saying, 'You know, funding is kind of tough now, but things are going to be better when you finish graduate school,' " Hubbard-Lucey recalls. She says her adviser assured her that the situation would improve, "so I said OK."

In fact the situation hasn't gotten better. It's worse. Support for biomedical research has declined by more than 20 percent in real dollars over the past decade. And even in good times, postdocs had a raw deal.

The entire system is built around the false idea that all these scientists-in-training are headed to university professorships.

"That's obviously unsustainable," says Keith Micoli, who heads the postdoc program at the NYU Medical Center. "You can't have one manager training 10 subordinates who think they are all going to take over that boss' position someday. That's mathematically impossible."

"But we've grown so dependent on this relatively cheap, seemingly inexhaustible supply of young scientists who do great work," Micoli says. "From the standpoint of dollars and cents, they're a great investment."

Even the lucky few who do land academic jobs find it increasingly difficult to get federal funding to run a lab. There's simply not enough money to go around, given the number of scientists working in academia today.

"Why go into an academic career when you know you've little chance of success?" Micoli muses. "Funding gets tighter and tighter. It's diminishing returns."

This is very much on the minds of today's postdocs.

Immunologist Victoria Ruiz grew up in modest circumstances in Brooklyn. She says her dad struggled with health issues for many years, "and I saw how troubling it can be, being a patient and being a patient's family. And I wanted to do something to help." 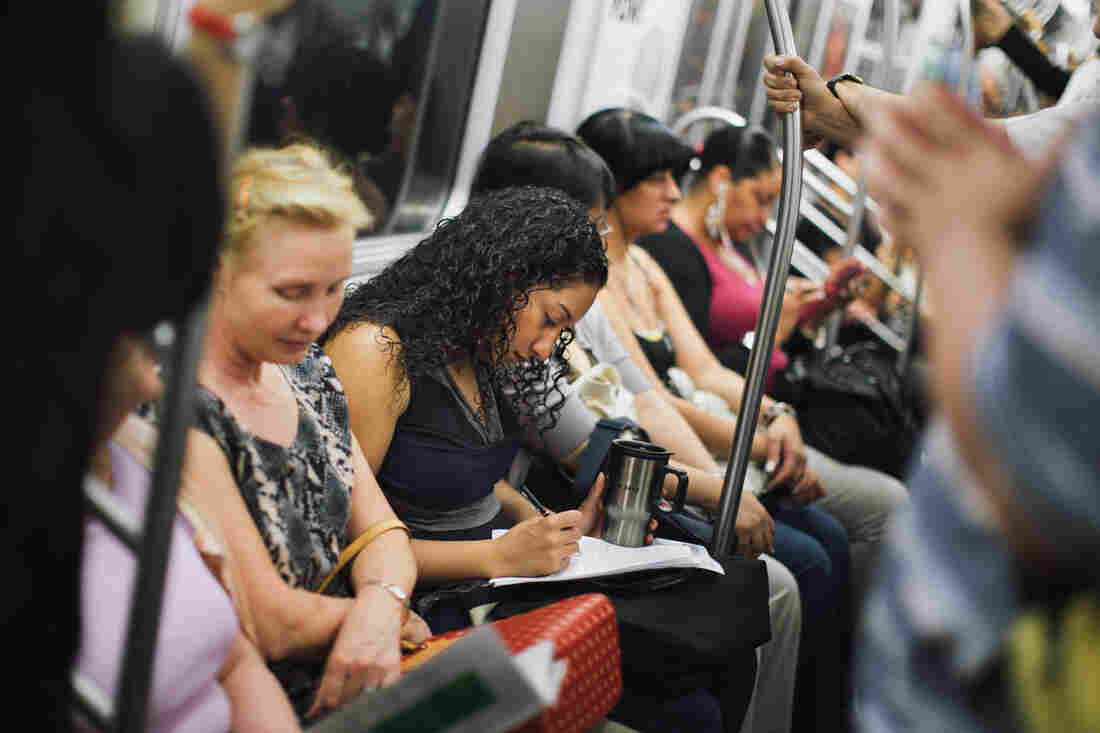 Victoria Ruiz (center) rides the N Train from Bay Parkway into Manhattan every day for work, a commute of nearly an hour each way. Her dad's long health struggles led her to medical research, she says. Ramsay de Give for NPR hide caption 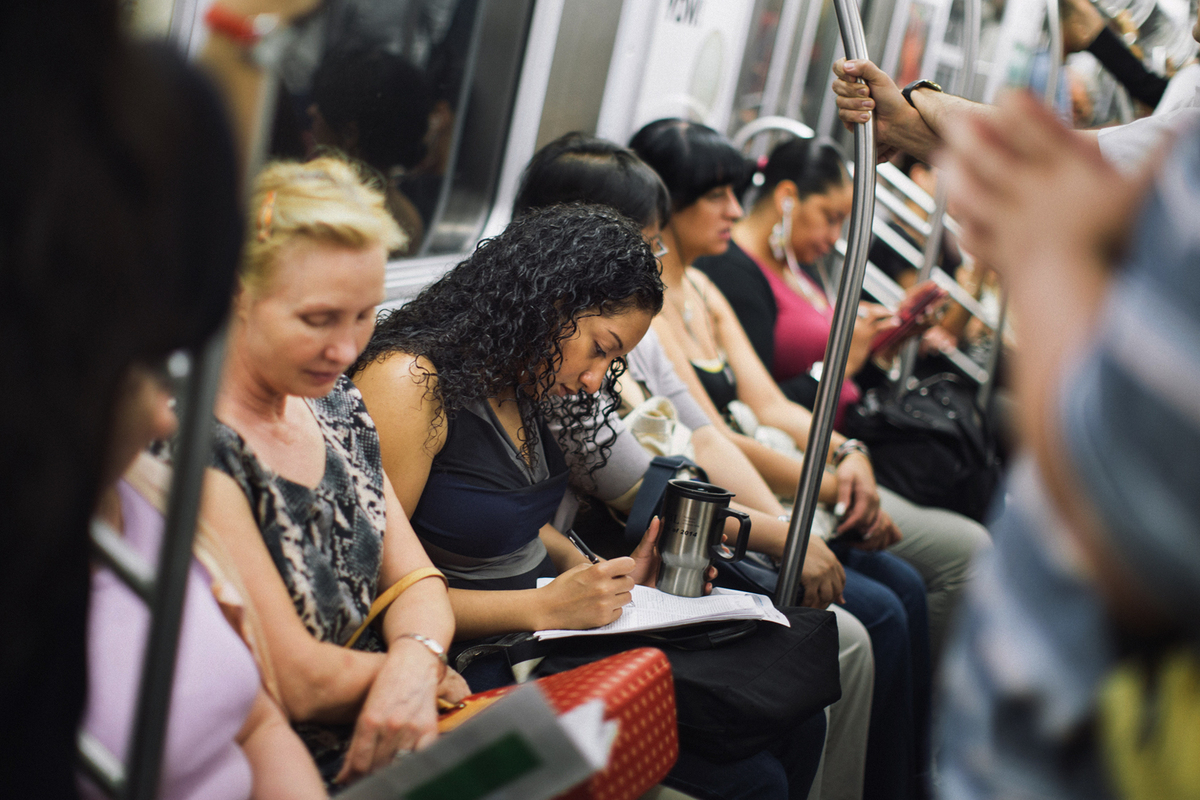 Victoria Ruiz (center) rides the N Train from Bay Parkway into Manhattan every day for work, a commute of nearly an hour each way. Her dad's long health struggles led her to medical research, she says.

Ramsay de Give for NPR

But after getting a Ph.D. at Brown University, and now working in a top lab, she knows she may not end up working to cure diseases.

"What would I do instead? I would love to work with inner city youth and show them different careers that are available to them," Ruiz says. "I came from a poorer community, so I would love to go back and give back to the community."

But she may not advise them to pursue careers in biomedical research.

Kishore Kuchibhotla still holds out that hope. He's a neuroscientist who landed a lucrative consulting gig after earning his Ph.D. from Harvard. But the job didn't inspire him. So he says he took an 80 percent pay cut to come back to the world of academic research as a postdoc.

When Scientists Give Up

"We will see if it's a foolhardy decision after a few more years," he says. But passion trumps everything for now.

"I'm very excited about really understanding how brains work, how brain circuits work, both in health and in disease," he says. "Is there a way we can slowly figure that out and unpack that so we can get a better handle on what's up in our skull? ... It's really one of the most fascinating organs to me."

But Kuchibhotla knows the system's stacked against him.

"I sometimes like to think of it like medical residents," he says. "Medical residents do need a few years of training before they can become attending [physicians]. The difference is there's not always a job on the other end" for the postdoctoral researchers.

There actually are jobs – in industry, consulting, government and other fields. Biomedical postdocs rarely end up unemployed. But many can't pursue their academic dreams, and they are often in their late 30s or even older before they realize that.

And despite those long odds, Vannessa Hubbard-Lucey was also holding out hope on the rainy spring day when we first talked.

"You have a Ph.D.," Hubbard-Lucey she told me. "It's supposed to be the highest degree you can get, so you feel like, well I've worked this hard, I've done so much, when am I going to get something good out of this?

"I'm sort of at the point where I'm hopeful that my paper's going to go in and it's going to get published," she says, "and at least I'll have something to show for it."

A published paper, then maybe an interview in academia, she was hoping, and at the end of that rainbow, a job running her own research lab from the honcho's office, not the lab bench.

"The boss occasionally comes out and wants to know what's going on, but he's mostly holed up in his office trying to write grants," she says. That may not sound glamorous, but "I would love to actually be telling other postdocs what to do. That would be the best part!"

The worst part: The boss spends a huge amount of time in his office writing grants because money is so tight these days even many top-flight ideas don't make the cut. Nearly 90 percent of grant proposals get rejected.

"Rejection's a little hard," she admits. "You have to get used to rejection."

That first conversation took place in May. Later in the summer, while Hubbard-Lucey was still working on her scientific paper, she heard about a job where she could make good use of her Ph.D. She wouldn't be running a lab or working in academia. But she would be advancing cancer research at a nonprofit institute. She got the job. And now, she says, she's happy with the new path she's chosen.