Accessibility links
Colorado Tries Hard To Convince Teens That Pot Is Bad For You : Shots - Health News Do you want to be a lab rat? That's what teenagers are doing when they smoke marijuana, the state of Colorado says. But since hard evidence of marijuana's harms is scanty, it may be a tough sell. 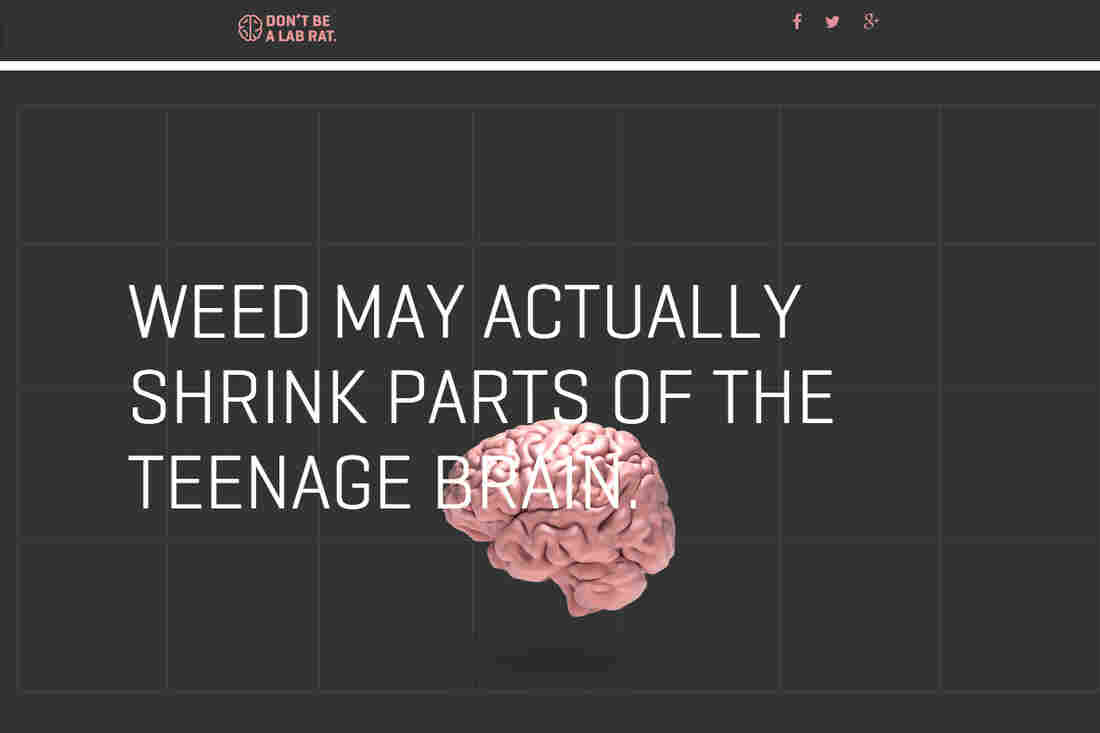 Colorado's "don't be a lab rat" campaign tries to make the point that we don't know what marijuana does to the teenage brain. via dontbealabrat.com hide caption 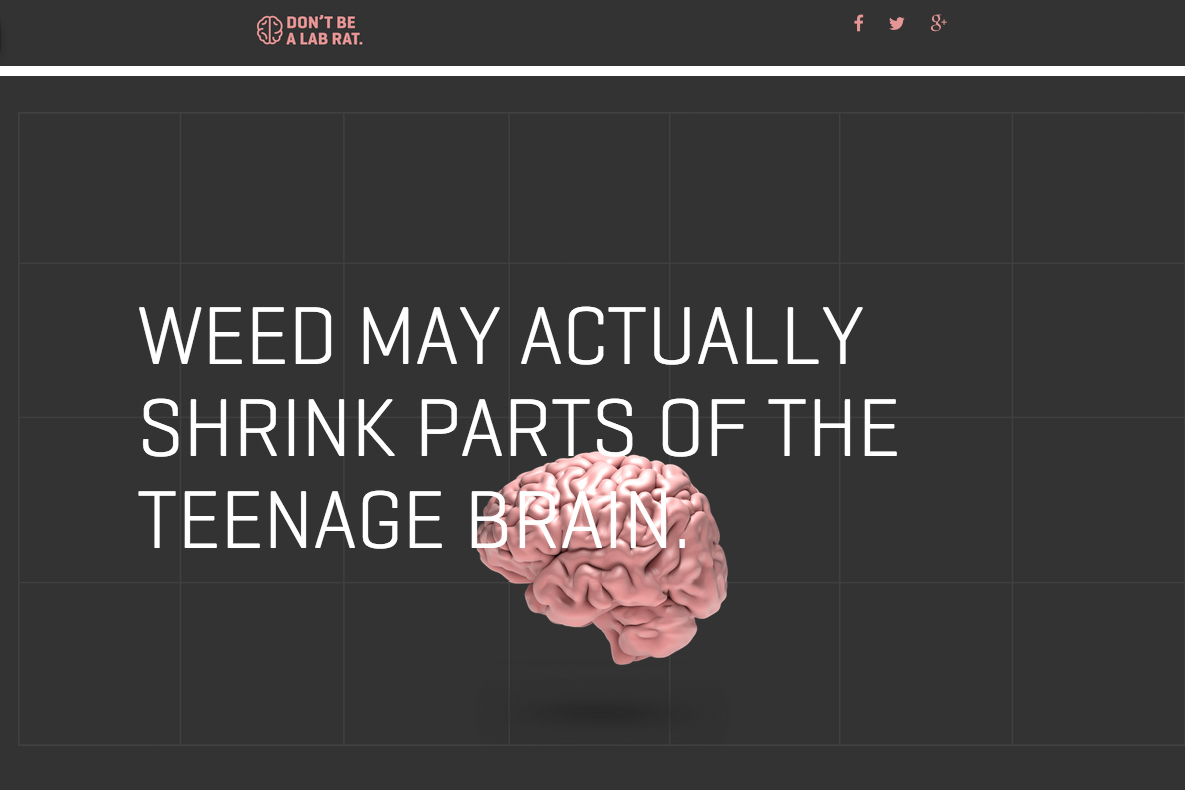 Colorado's "don't be a lab rat" campaign tries to make the point that we don't know what marijuana does to the teenage brain.

Colorado's new campaign to deter teen marijuana use tries to make the case that weed is bad for your brain.

One TV ad shows a group of teens lighting up inside a dark car as moody music plays in the background. The commercial cites a Duke University study that found a link between regular marijuana use and a lower IQ.

"Some dispute the study," the PSA admits. "But what if years from now you learn those scientists were right?" The kicker comes as the scene fades to black: "Don't be a lab rat."

The campaign, which launched last month, is designed to target kids in the 12 to 15 age group. It also includes a website with links to news stories about the negative effects of marijuana (including a few on NPR.org).

To further reinforce the message, the agency has installed huge, human-sized rat cages near libraries and skate parks in Denver and at concert venues like Red Rocks Amphitheater. "It's like a big art installation," says Mike Sukle, who runs Sukle, the ad agency the state hired to design the campaign. "It's the coolest thing that we've ever gotten to work on," Sukle says. "But it's a huge challenge." 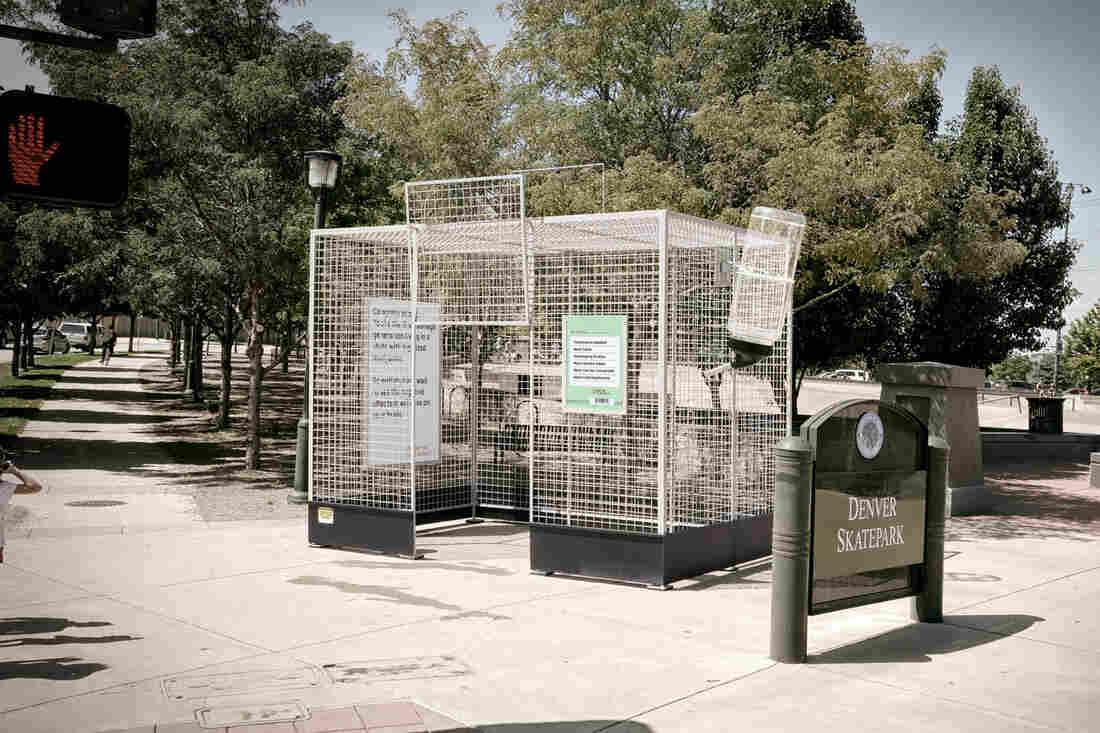 This human-scale lab rat cage is parked near a skate park in Denver, Colo., to make a point about the lack of science on marijuana. Richard Feldman Studio/Sukle Advertising and Design hide caption 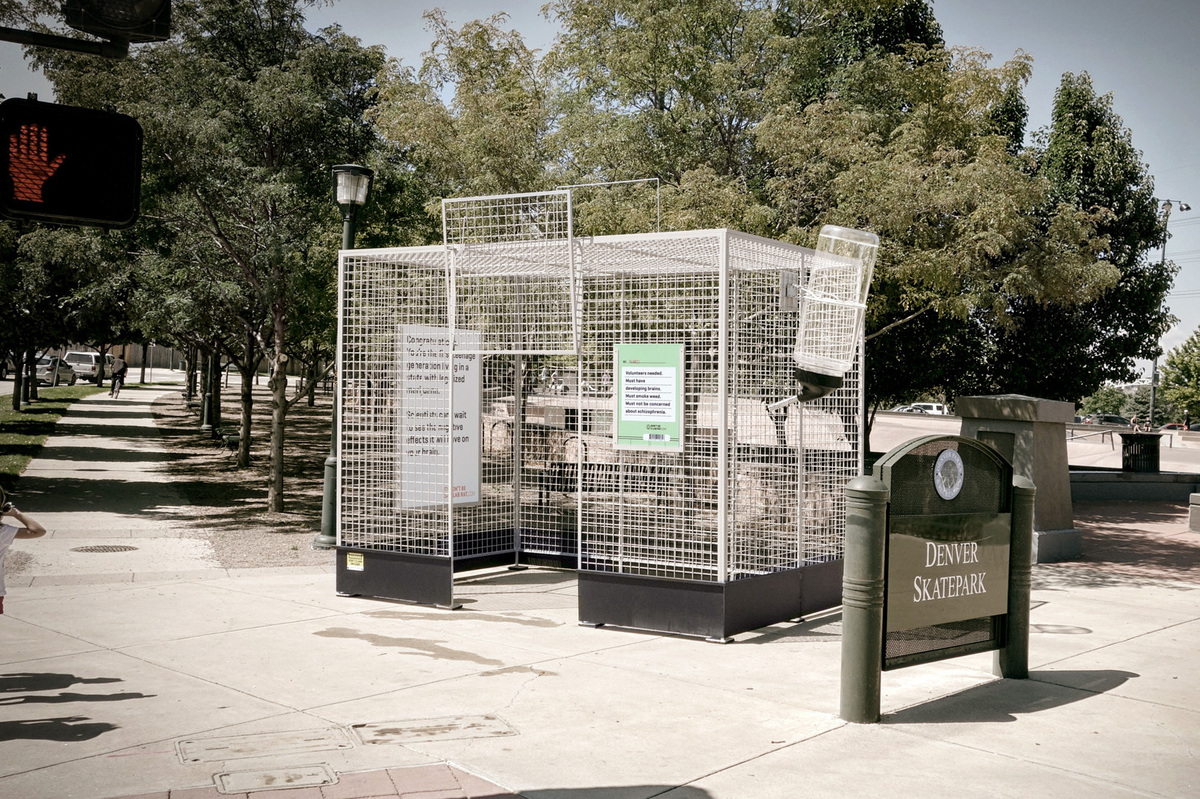 This human-scale lab rat cage is parked near a skate park in Denver, Colo., to make a point about the lack of science on marijuana.

Ever since recreational marijuana was legalized in Colorado in January, public health officials have faced an unprecedented challenge: explaining to teens why they shouldn't smoke weed even though it's legal for their parents to do so.

Surveys and focus groups the state conducted prior to launching the campaign suggest that some teens didn't have a clue that smoking marijuana could hurt them, Sukle says. "Because of medical marijuana, a lot of kids thought it cured cancer. They really started thinking there was no harm to it."

Campaigns against teen drinking and tobacco use have generally focused on the health risks. But while there's no dearth of research that shows tobacco is bad for us, the research on marijuana's effects is still in the preliminary stages. Since marijuana isn't legal in most states, it's been hard for researchers to get federal funding for studies, as well as access to large amounts of the substance. The Colorado campaign depends on small studies that are hardly bulletproof.

"The brains of teen marijuana users show significant abnormalities," the website says. That's technically true — researchers from Northwestern University observed differences in the brains of 20 casual pot users as compared to 20 nonusers. However, the researchers can't say that these differences are caused by marijuana use, and there isn't any evidence to show that these differences are associated with any harm. Plus the number of people in the study is so small it's not reliable.

"A lot of the facts are from studies that are preliminary. And we wanted to be honest with the kids about that," Sukle says. Hence the 'lab rat' theme. "Maybe [marijuana] isn't going to be as bad as it looks," he says, but it could be really damaging. The campaign asks teens whether they want to take that risk.

To be sure, there is a growing body of evidence that shows that marijuana isn't good for the developing brain, says Dr. Herbert Kleber, who directs the Division on Substance Abuse at Columbia University. "The adolescent brain is still maturing," he says, and teens who use marijuana are more likely to become dependent on it than adults. 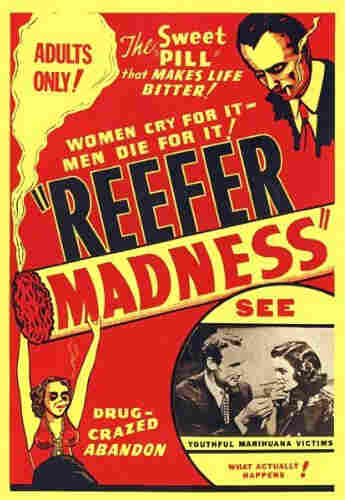 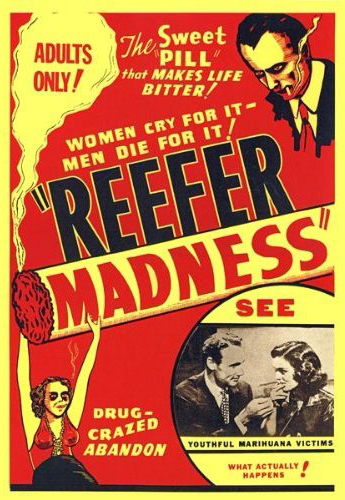 Plus these days marijuana contains more of the psychoactive ingredient THC than the stuff that John Lennon used to smoke back in the 60s, Kleber says.

The trouble is, those messages aren't quite as specific or compelling as the ones in Colorado's campaign. That's part of the challenge in developing a public health campaign, says Kathleen Kelly, the director of the Center for Marketing and Social Issues at Colorado State University who is not involved in the "lab rat" campaign.

"What you have to be very careful about is that your message is credible and it's believable," Kelly says. "Don't be a lab rat" is a far cry from scare campaigns like Refer Madness, the 1939 anti-marijuana film that has become a camp classic. "They're not positioning the message as this is absolutely fact."

Colorado's approach seems promising, Kelly says. "Colorado is trying to use a strategy that's somewhat similar to what they do with the Truth campaign against cigarettes," she says.

That campaign, which is funded by the nonprofit American Legacy Foundation, aims to expose "Big Tobacco's lies and manipulation" and show kids how the industry tries to trick them into smoking. "The underlying message is don't be made a fool," Kelly says. "Don't let them convince you that this is safe"

In Colorado, Sukle's firm and third-party evaluators are tracking how teenagers are responding to the message. Still, while the campaign may discourage some teens from trying marijuana, it doesn't teach those who are going to use it anyway how to reduce risk.

"The first message we need to get out there is 'Don't use marijuana,' " says Dr. Leslie Walker, chief of the Adolescent Medicine division at Seattle Children's Hospital. "But if you do, don't get behind the wheel."

Researchers and public health officials are still trying to figure out the best ways to talk to teens about the drug, Walker says. "I think we have some more work to do."