Fair-Trade Condoms: Latex That Lets You Love The World

Fair-Trade Condoms: Latex That Lets You Love The World 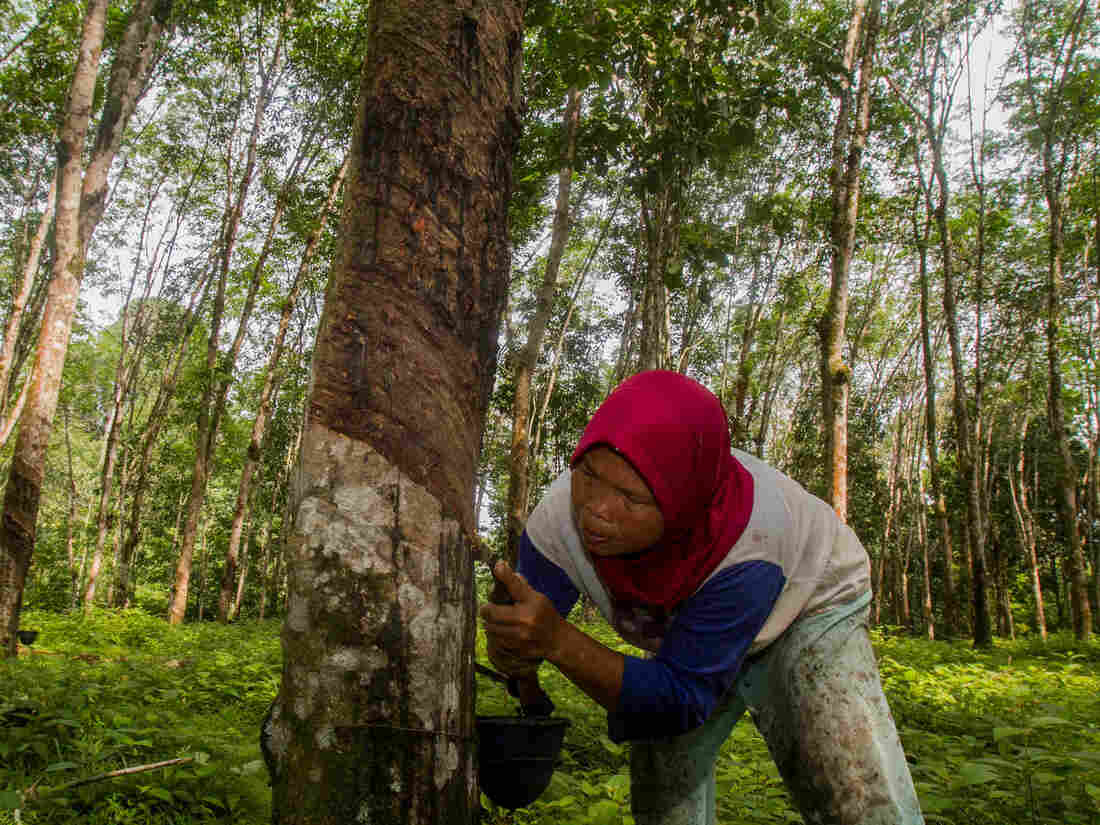 A rubber tapper makes an incision in a tree on a plantation in Indonesia. Tri Saputro/Center for International Forestry Research hide caption 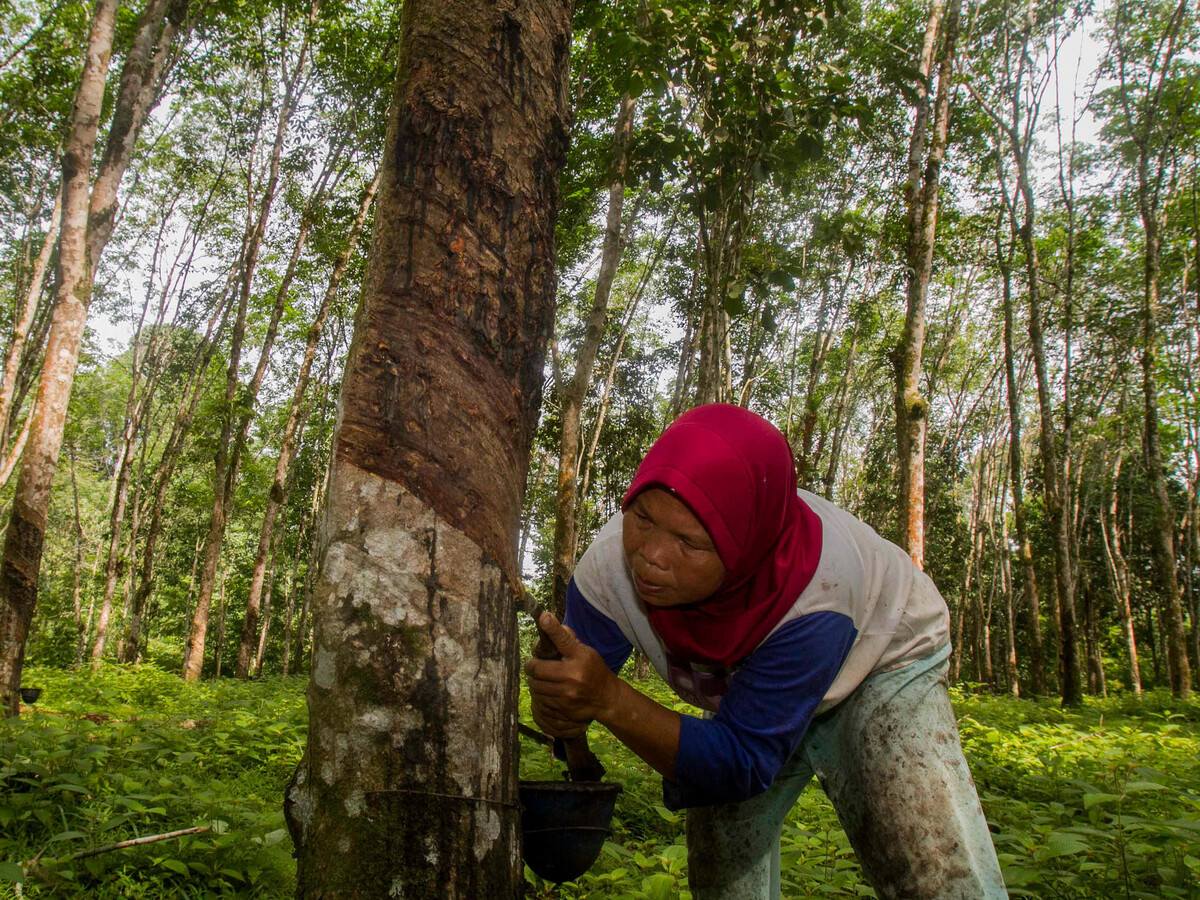 A rubber tapper makes an incision in a tree on a plantation in Indonesia.

Finding the right condom just got a little bit more like finding a good cabbage.

Picky shoppers might notice labels on condom boxes these days that say fair trade, non-GMO and all natural.

Condoms don't just fall off trees, but most of them do start there. The major ingredient in most condoms is natural latex, which comes from rubber trees. A lot has to happen to make tree sap into a Jimmy hat. A number of companies are trying to make that process more ethical, from tree to ... well, you know.

Some of these condoms are certified by the Fair Rubber Association, others by Green America. A PETA sticker ensures that the product hasn't been tested on animals. Many have non-GMO labels. Some claim to have eliminated nitrosamines, a class of carcinogens that's regulated in rubber nipples for baby bottles and pacifiers, but not in condoms. 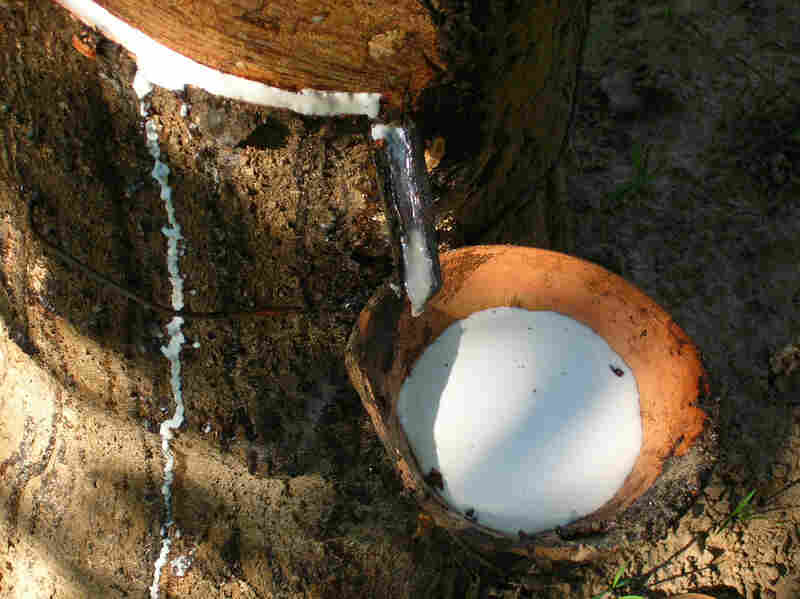 Rubber drips from a tree into a bucket. Faisal Akram/Flickr hide caption 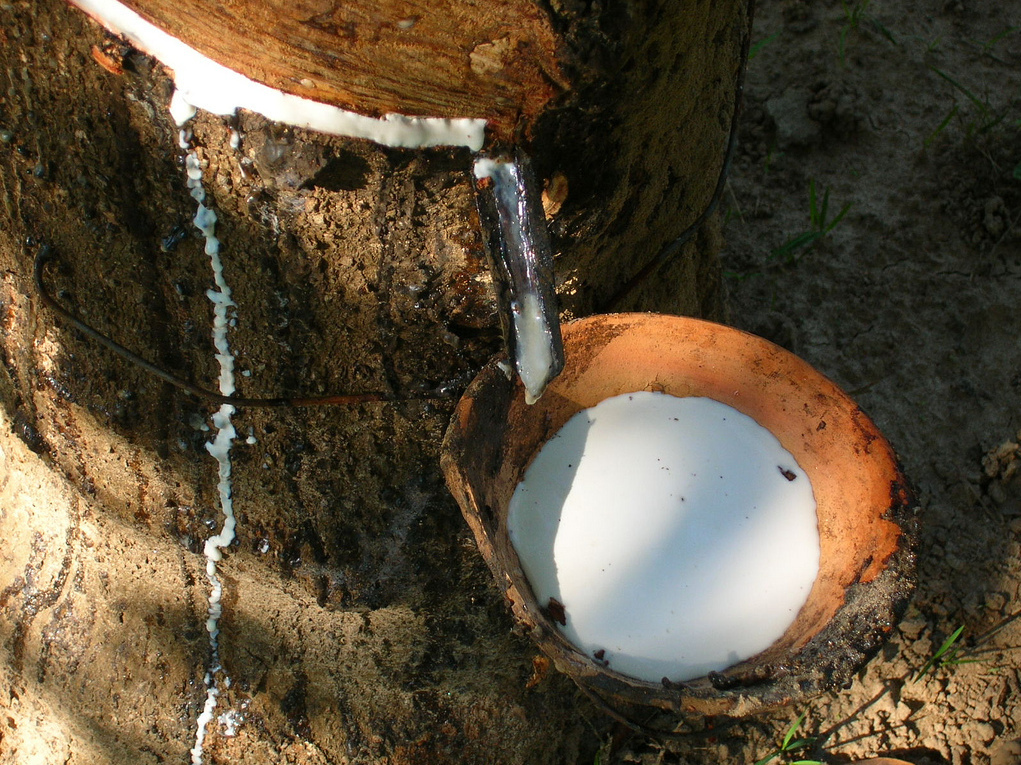 Rubber drips from a tree into a bucket.

For all-natural folk, some companies use dyes derived from red cabbage and carrots; some have natural licorice flavoring. For vegans, there are rubbers with something like thistle extract instead of casein, a milk protein that's a common condom ingredient.

All this might leave you wondering how, exactly, a condom is made.

For millennia, the answer was: with whatever's available. "They were made out of fish guts, lamb intestine, beef intestine, and linen," says Aine Collier, who wrote a book about the history of the condom. "The ancient Egyptians used papyrus. The Japanese used extremely fine leather, and they even used a kind of shell that could be pounded. So, latex was a huge step forward, both for comfort and for safety."

Condoms are still made from lamb intestines. But polyurethane, natural rubber and a synthetic rubber called polyisoprene are also used.

These days, step one for a latex condom is to go to a rubber tree plantation in South Asia, armed with a bucket and knife. Getting rubber out of a tree is a little like tapping for maple syrup.

Rubber tappers wake up in the wee hours of the morning to get to the sap before it congeals in the heat of the day. They make incisions in the bark to get it flowing, place a bucket below and let the milky sap bleed.

Reinventing The Condom With Easy-On Tabs And Beef Tendon

Gates Foundation Says It's Time For A Snazzier Condom

"And this is the raw material for balloons, football bladders, household gloves, baby bottle teats and condoms," says Martin Kunz, founder of the Fair Rubber Association. The liquid travels to a factory, often near the plantation, then to another to be formed, tested and packaged. Kunz estimates that one tree can produce enough rubber to make about 100,000 condoms.

From tree to package, most of the human labor that goes into making a condom happens on the plantation. As with tea and coffee, rubber that's certified fair trade costs more — about 25 cents extra for each pound of rubber. The money goes toward better housing and education, access to electricity, clean drinking water and health care for plantation workers.

The good deeds abroad are sometimes packaged with benefits at home. For every paraben-free love sock that L. Condoms sells, the company donates another to public health partners in sub-Saharan Africa.

Collier says while fair trade certifications may be valuable, in the grand history of condoms, eco-condoms aren't particularly revolutionary. "I think what we're seeing now, this sort of eco-twist to it, doesn't really represent anything fantastic as far as research and development. Fair trade rubber is still rubber."

In the end, Collier says, it may be just one more phase in the condom's long history of creative packaging. A 17th-century sheath might have come with a pink ribbon. In the 1920s and 1930s, condom tins came with flapper silhouettes. Others sold then appealed to people's fascination with Egypt.

"It wasn't about the quality of the condom. Many were absolute crap. But people were buying them with the eye," says Collier. "They loved the packaging, because it fit the lifestyle they were trying to lead. And I think that's exactly what this fair trade, biodegradable, green, vegan condom sales thing is all about. It's just marketing."

Regardless, condoms are still the most effective way to keep sex safe.

An earlier version of this post incorrectly suggested that sap could solidify inside a rubber tree, and that condoms are manufactured in one factory. Sap congeals when exposed to warm air. Latex is sent to multiple factories in the process of condom manufacture.