Accessibility links
Avoid The Rush! Some ERs Are Taking Appointments : Shots - Health News Nobody looks forward to sitting in the waiting room. So some hospitals are trying to improve customer satisfaction by offering online appointments. The pitch: "Wait for the ER from home." 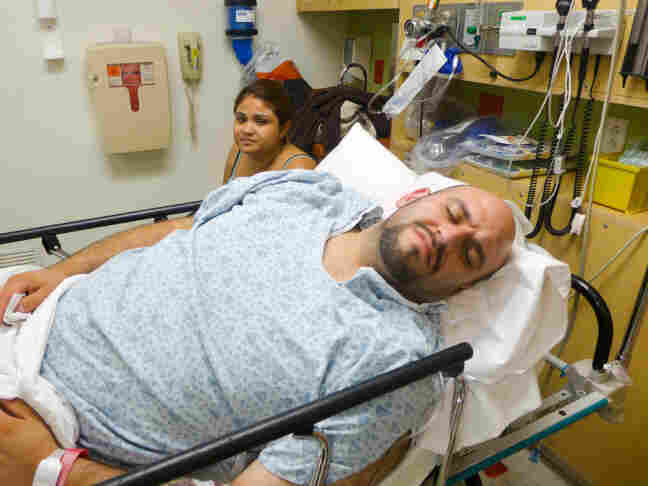 Three times in one week, 34-year-old Michael Granillo returned to the emergency room of the Northridge Hospital Medical Center in Southern California, seeking relief from intense back pain. Each time, Granillo waited a little while and then left the ER without ever being seen by a doctor.

But on a recent Wednesday morning, he woke up feeling even worse. This time, Granillo's wife, Sonya, tried something different. Using a new service offered by the hospital, she was able to make an ER appointment online, using her mobile phone.

When they arrived at the hospital, he was seen almost immediately.

"The minute I told her who he was and why we were here, she opened the door and let him in," says Sonia Granillo. "That was a relief ... because I thought he was going to say, 'Let's go, let's go. I can't wait.' "

We're in a crisis right now with a shortage of access to primary care. I think this emergency room is probably taking advantage of that need.

Hospitals around the country are competing for newly-insured patients, and one way to increase patient satisfaction, they figure, might be to reduce the frustratingly long wait times in the ER. To that end, Northridge and its parent company Dignity Health started offering online appointments last summer; since then, more than 22,000 patients have reserved spots at emergency rooms in California, Arizona and Nevada.

Recently, Dignity stepped up its marketing — with billboards, print advertisements and online and radio spots. One online ad features a woman sitting in a hospital waiting room, and then cuts to her on a living room couch with a dog, as the words on the screen read, "Wait for the ER from home."

Dr. Stephen Jones, who heads the Northridge ER, explains that the system isn't meant to be used during real emergencies — like chest pain or trouble breathing.

"If they have those signs or symptoms, they should pick up the phone and dial 911," Jones says. When patients with appointments get to the hospital, they still may be bumped in favor of people who are more seriously ill.

But hospital executives say the approach makes business sense for hospitals because it gives medical staff a better sense of who will be coming through the door, and it makes patients more comfortable.

Patients want to get access to health care the same way they get services in other industries, such as retail or travel, says Chris Song, a spokesman for InQuicker, a Nashville-based company that offers the online scheduling in California and 25 other states.

"When is the last time someone bought plane tickets at the gate?" Song says.

Still, some critics say the online check-in system may be convenient, but is not necessarily cost-effective. If the country wants to decrease the costs of health care, patients need to be treated at the right place at the right time, says Dr. Del Morris, president of the California Academy of Family Physicians. Patients who can make appointments should do so at their doctors' offices, he argues.

"Emergency rooms are there to take care of people who have emergencies," Morris says.

People with non-life-threatening conditions should make an appointment to see their doctor instead of going to the ER, he says. "We're in a crisis right now with a shortage of access to primary care. I think this emergency room is probably taking advantage of that need."

Jones, the medical director for the emergency room, says some patients who come in through the appointment service probably should be seen by a primary care doctor, but either don't have one or can't get a timely appointment.

"I think this represents a reasonable alternative for patients who are concerned they may have an emergency condition," he says.

On the day of his appointment at Northridge Hospital Medical Center, Granillo winced and shifted uncomfortably in the ER exam room.

After a CT scan, doctors told the couple that Granillo has a very serious condition – lymphoma, a type of cancer. Jones says Sonya was right to insist her husband come in for care.

"She was really worried about his condition and rightfully so," Jones says.

Sonya Granillo says if she hadn't made an appointment, her husband might still not know about his diagnosis.

"Over five days, I have been trying to get him into the ER, and that was my last resort." She says. "And it worked."