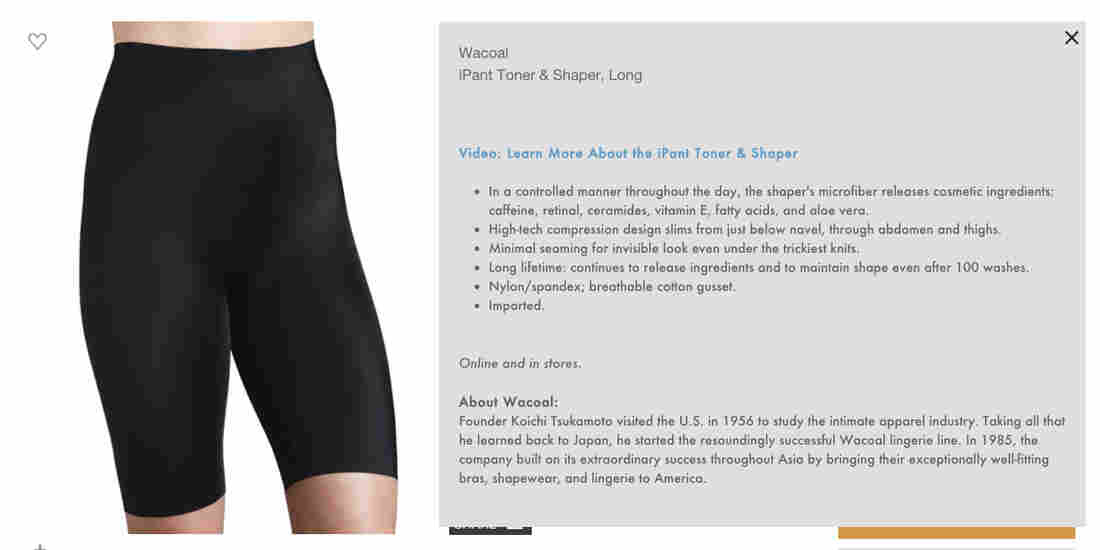 An online ad for Wacoal's iPant, which incorporates caffeine and other added ingredients. via Neiman Marcus hide caption

An online ad for Wacoal's iPant, which incorporates caffeine and other added ingredients.

I love caffeine. I would love to trim my derriere. Combining the two seems like such an obvious win. Evidently some manufacturers of women's undergarments thought so, too. And now they're $1.5 million poorer.

The Federal Trade Commission has ordered two companies, Norm Thompson Outfitters Inc. and Wacoal America, to stop marketing shapewear infused with caffeine. The firms claimed that the amped-up underwear would cause fat loss and a reduction in body size.

The Norm Thompson company marketed its garments by saying they would "reduce the size of your hips by up to 2.1 inches and your thighs by up to one inch, and would eliminate or reduce cellulite and that scientific tests proved those results."

But the federal government says those claims are false and not supported by scientific evidence.

"If someone says you can lose weight by wearing the clothes they are selling, steer clear," Jessica Rich, director of the FTC's Bureau of Consumer Protection, said in a statement Monday. "The best approach is tried and true: diet and exercise."

Tried and true, perhaps, but not nearly as much fun as donning the "iPant long leg shaper," which sells for $60 and promises to "mobilize fats."

I am well caffeinated as I type this, thanks to the NPR coffee machine, and by amazing coincidence happen to be wearing a shaping undergarment. Could I be mobilizing fats while I sit?

Unfortunately, there's no evidence that caffeine's slight metabolic boost results in any measurable weight loss (though it does help with thinking and athletic performance). So my shapewear isn't doing much aside from banishing the visible panty line.

Still, a girl can hope. And I'm not alone. Among the Amazon reviews for the iPant you'll find this: "I have worn my iPant shapers every day for about 1 month, and my skin is definitely smoother. In fact, my husband even noticed that my thighs are smoother and thinner!!!"

Keep that husband, honey. And you may not be out of luck on the pants, either. As part of the FTC settlement, the $1.5 million that the firms must pay will be used to reimburse customers who bought the caffeinated skivvies.