Accessibility links
Experimental Drug Jams Ebola Gene To Fight The Virus : Shots - Health News A drug being tested against Ebola makes use of new scientific insights that could prove useful for treating other illnesses, including one that is inherited. 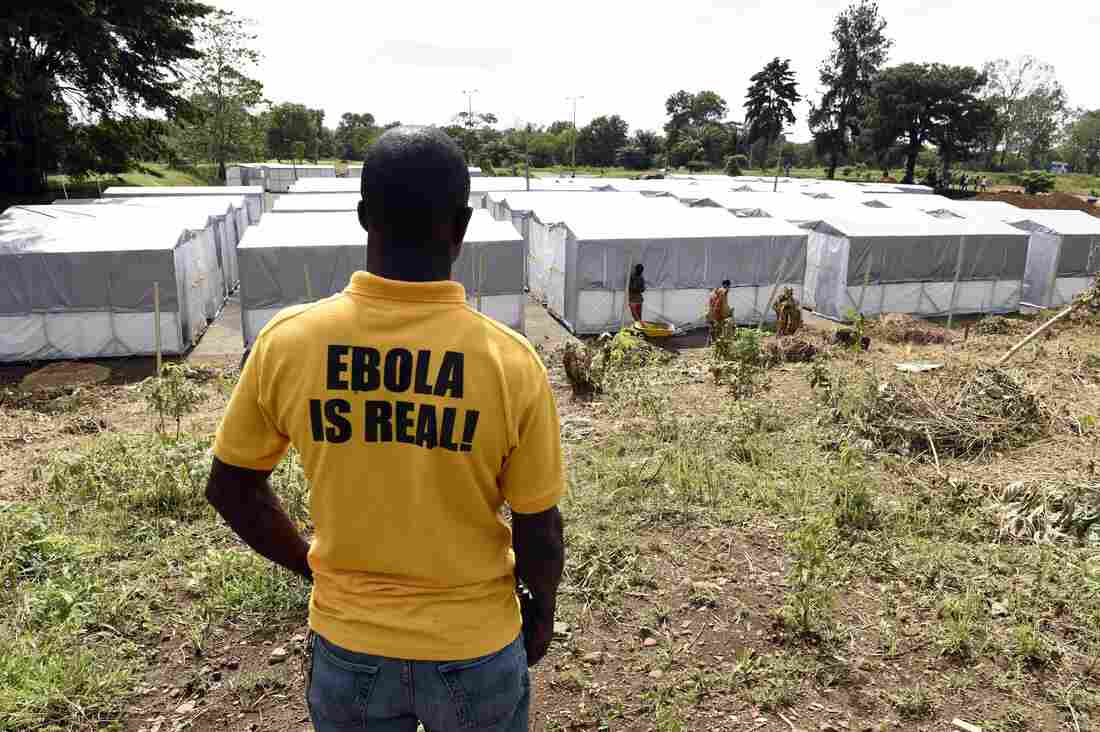 A man stands above a new Ebola treatment center in Monrovia, Liberia. Health workers in Liberia, the hardest-hit nation, have turned people away from treatment units because of shortages of beds and staff. Pascal Guyot/AFP/Getty Images hide caption 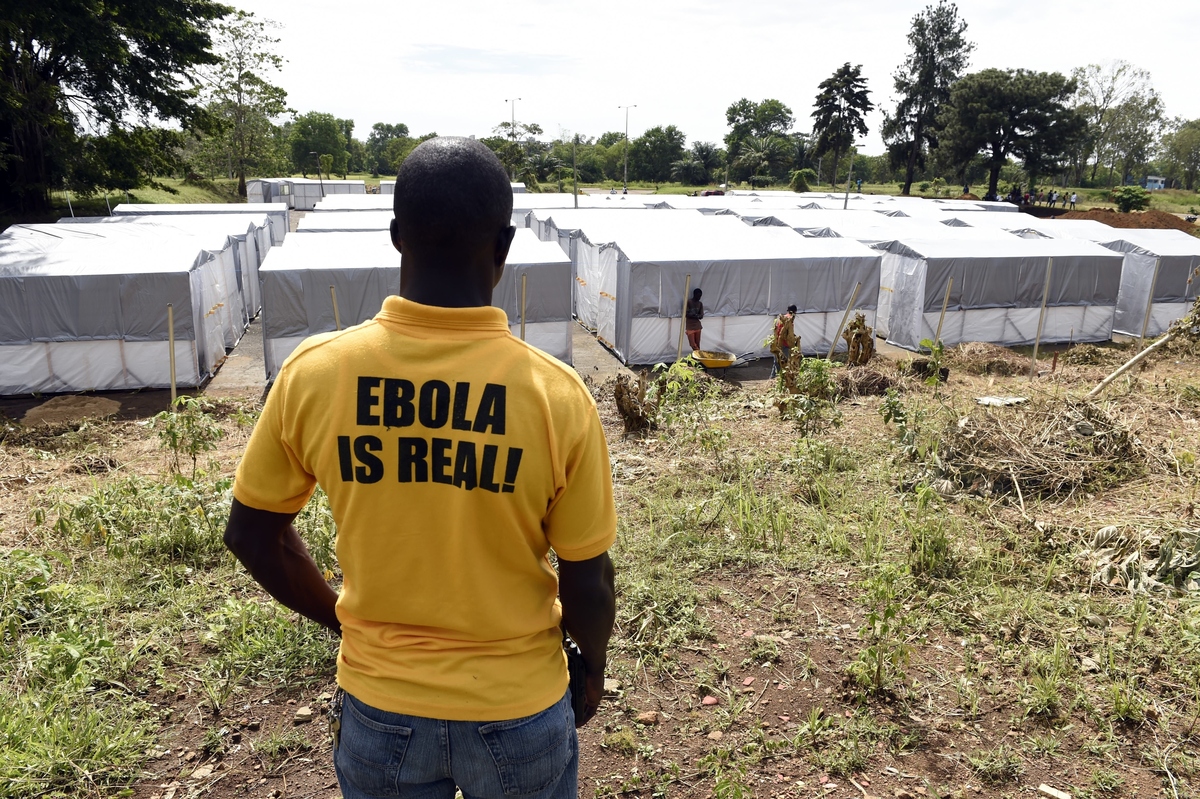 A man stands above a new Ebola treatment center in Monrovia, Liberia. Health workers in Liberia, the hardest-hit nation, have turned people away from treatment units because of shortages of beds and staff.

Plans are afoot to test drugs to treat Ebola in West Africa — and those studies could have far-reaching benefits far beyond this rapidly expanding epidemic.

That's because some of the drugs are based on nascent technologies that can be used to treat other infectious diseases — and even inherited ailments, such as Duchenne muscular dystrophy.

We've written about some of these drugs here on Shots previously. At this point it's impossible to say with certainty whether any of these approaches is more promising than any other. Research is always full of surprises.

Today we take a look at one of these potential drugs, not because it's necessarily the best and brightest hope, but because it's a window on how drug development is evolving.

The experimental drug is called AVI-7537. And the technology behind it is at the frontier of medical science. AVI-7537 is being developed by Sarepta Therapeutics in Cambridge, Mass. And it's no ordinary drug. It goes right to the genetic heart of the Ebola virus.

As is common among viruses, Ebola's genes are written in RNA code, rather than DNA. One feature of RNA is that you can create a stretch of this material and design it so it will stick to its mirror-image opposite in naturally occurring RNA.

In 2006, Craig Mello and Andrew Fire shared a Nobel Prize for exploiting this as a powerful tool for manipulating genes. Their discovery is called RNA interference, or RNAi.

Simply put, a synthesized bit of RNA can jam the genetic signal by binding to a target bit of genetic material and simply getting in the way.

A Canadian company called Tekmira is producing small bits of RNA that will recognize and bind to Ebola viruses in order to put them out of commission.

But you can't just inject RNA into a person's arm and expect the stuff to make its way to any circulating Ebola virus.

"Naked RNA that's injected into mammals gets broken up immediately with a number of enzymes we have just in our blood," says Dr. Michael Wong, Sarepta's senior medical director for infectious diseases.

Tekmira's drug seeks to avoid that by encapsulating the snippet of RNA inside a tiny bubble of fat (lipids, to be more technical) to protect it from enzymes in the bloodstream.

Sarepta is trying a different approach. Instead of making a segment of RNA to bind to a site on one of the Ebola genes, it makes a segment of material that looks a lot like RNA but isn't quite. The technology has a melodic name — it's a "morpholino oligomer." (To be more precise and less euphonious, it's a phosphorodiamidate morpholino oligomer, or PMO).

Wong says a short strand of this material will still bind strongly to natural RNA, but enzymes in the blood won't digest it.

AVI-7537 is an oligomer that has been crafted to bind to one of Ebola's seven genes. The idea, Wong says, is to shut down that gene, and by so doing disable the Ebola virus.

It's an utterly rational approach to drug design, which is what makes it so appealing. When AVI-7537 was given to monkeys then injected with high doses of Ebola, 60 to 80 percent of the animals survived, Wong said. So it's promising but far from perfect. And because people aren't monkeys, it's hard to say much about this as a human drug until it gets tested in people.

Wong hopes that Ebola will be one small example of the power of this technology. "You can change the combination of [genetic] building blocks in any manner you're interested in and target different things [like] mutations in human genes," he says.

In fact, Sarepta has targeted genetic mutations in Duchenne muscular dystrophy, an inherited disease that gradually robs boys of their muscle power.

This morpholino oligomer targets a small defect in the genetic code for children with Duchenne. As a result, this mutation remains silent in these boys when they're treated with the drug.

Wong says that one small clinical trial has now run for more than 2 1/2 years, and he says they're seeing "remarkable safety and tolerability in the boys that are receiving the agent." Wong says the boys are continuing to walk and breathe on their own — defying the odds in this disease.

Sarepta is also pushing another boundary, which is procedural rather than scientific. Wong says they're looking for innovative ways to streamline the U.S. Food and Drug Administration's approval process "from the 10 to 12 years of the usual timeline to something that's much more relevant to today's issues."

That would require both persuasive science and open minds.