Accessibility links
For The Formerly Obese, Stigma Remains After Weight Is Lost : Shots - Health News People who have lost significant weight are uneasy about revealing that in online dating profiles, because obesity is often judged as a moral failing. Research shows they have good reason to worry. 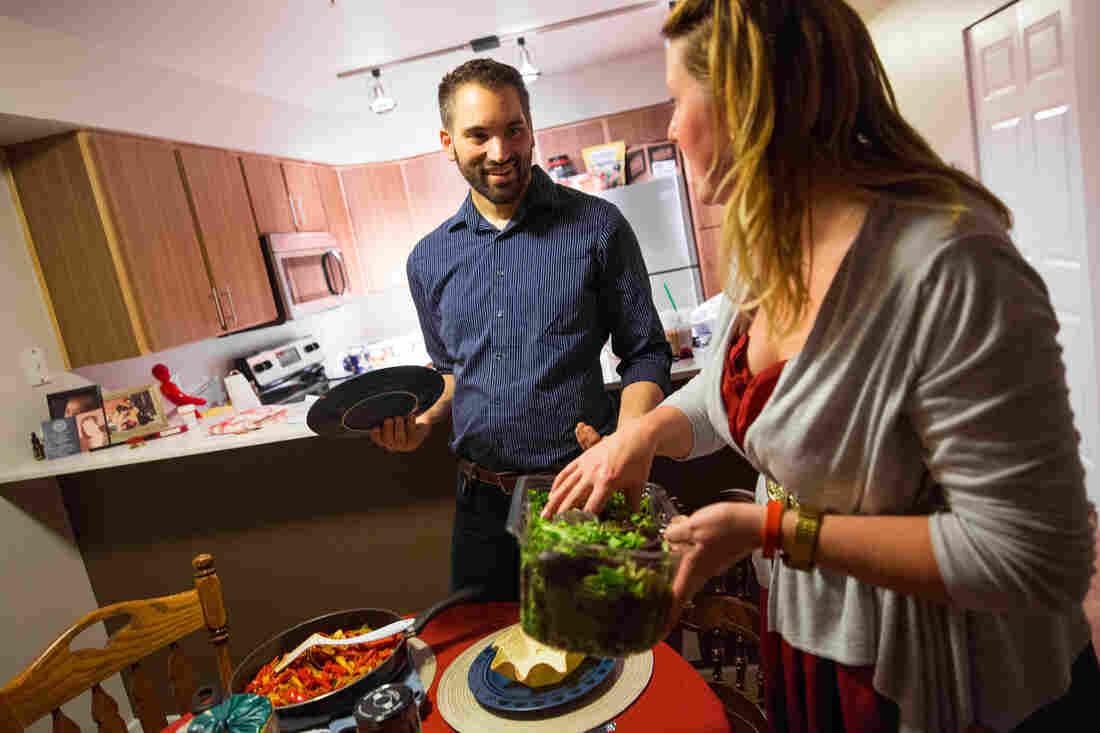 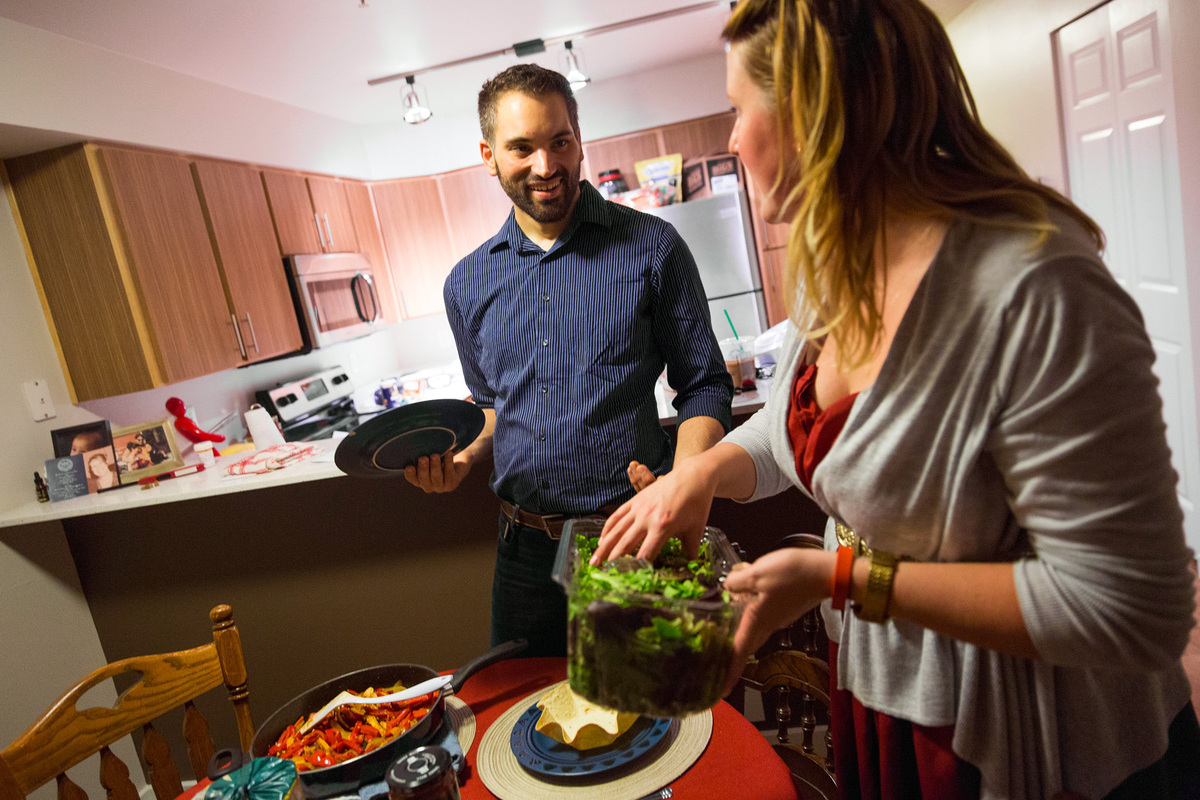 Carlos Romero and girlfriend Kate Rowe sit down for a meal they cooked together. Two years ago, Carlos Romero weighed 437 pounds.

Carlos Romero's apartment is marked with remnants from his former life: a giant television from his days playing World of Warcraft and a pair of jeans the width of an easy chair. Remnants of that time — when he weighed 437 pounds — mark his body too: loose, hanging skin and stretch marks.

"I lift weights and work out and work hard, but there's lasting damage," says Romero.

Yet for all the troubles he had dating when he was obese — all those unanswered requests on dating websites — shedding weight left him uneasy about how much to reveal. "If you were to say to someone on the first date, 'I lost 220 pounds,' you're indicating that you had a very serious issue at one point and that you may still have that issue," he says. "So it's not something I put on a dating profile because I don't want people to judge me for it." 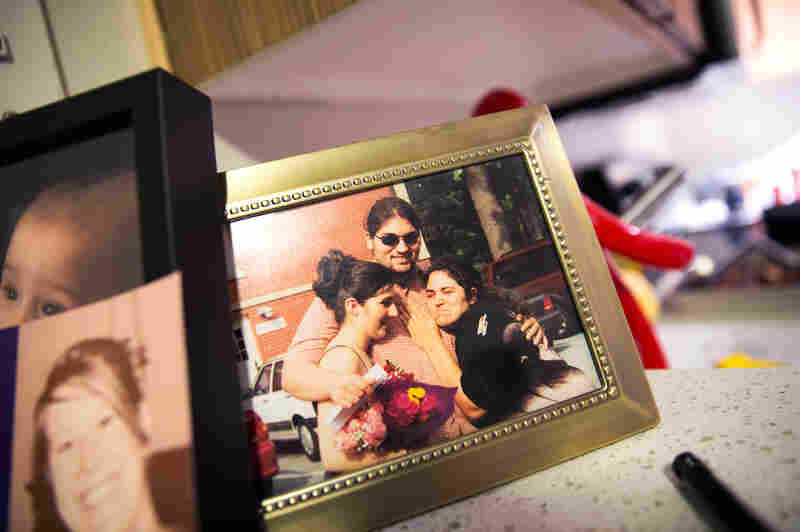 A photograph of Carlos Romero with his sisters in high school sits on the counter in Romero's apartment in Seattle. Mike Kane for NPR hide caption 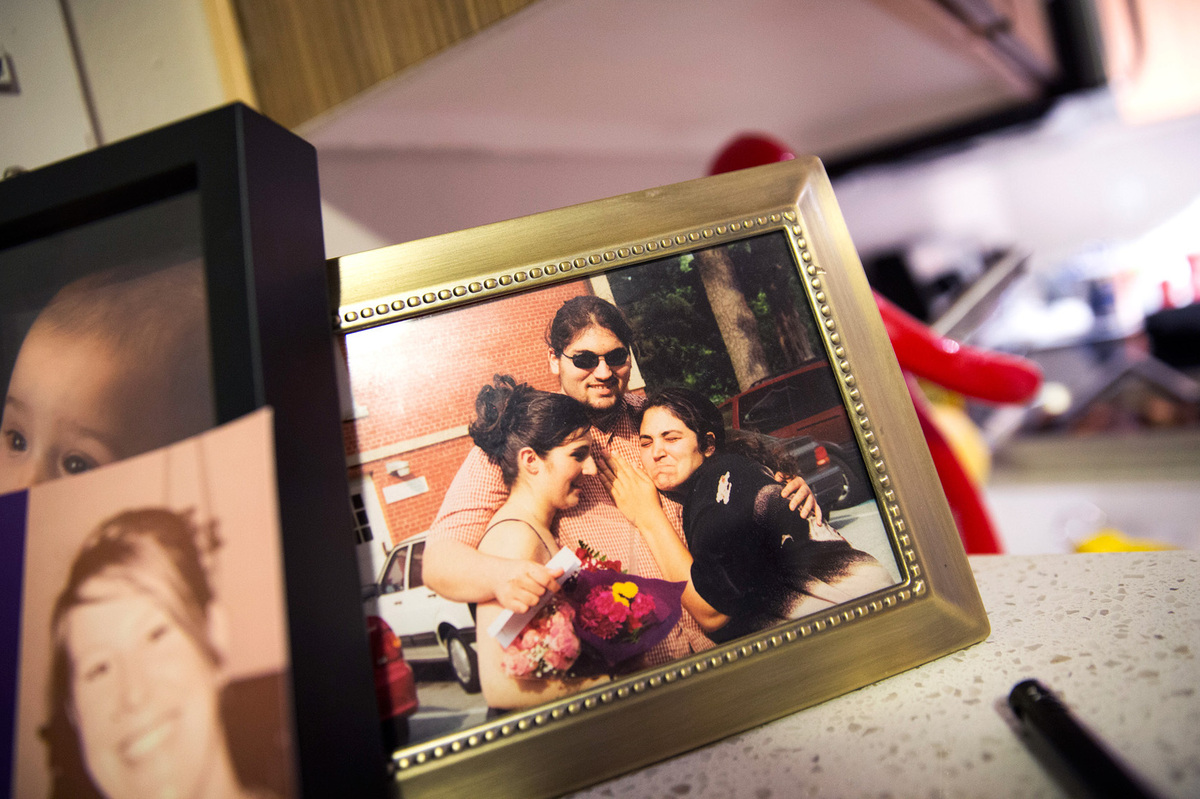 A photograph of Carlos Romero with his sisters in high school sits on the counter in Romero's apartment in Seattle.

The stigma of obesity is so strong that it can remain even after the weight is lost. Holly Fee, a sociologist at Bowling Green State University, has conducted some of the only research on dating attitudes toward the formerly obese. In 2012, Fee published her findings in the journal Sociological Inquiry.

She found that potential suitors said they would hesitate to form a romantic relationship with someone who used to be heavy. The biggest fear, Fee says, is "they believed these formerly obese individuals would regain their weight."

The prevailing belief is that people who have never been obese can control their weight, and those who've been heavy have less willpower, says David Sarwer, a psychology professor and the director of clinical services at the Center for Weight and Eating Disorders at University of Pennsylvania's Perelman School of Medicine. Physicians and the general public tend to think that obesity is "a moral failing, and that they can't push away from the table, " Sarwer says.

For men and women who have lost a significant amount of weight, excess, hanging skin can hold them back from dating and being intimate. Health insurance almost never pays for costly plastic surgery to correct the problem, which can be uncomfortable and embarrassing.

"I think they can be particularly self-conscious about this issue and be worried about the first time the partner sees them undressed," Sarwer says. "How are they going to respond? Are they going to be grossed out?"

I said, 'I have to tell you this thing. Please don't judge me.'

It wasn't sex or romance that sparked the big change in Carlos Romero two years ago. That's when, at age 28, he was diagnosed with muscular dystrophy. Romero knew if he didn't lose weight, his condition could worsen quickly. He stopped eating pizza and ramen noodles and drinking soda and began exercising. Then, a year ago, after he had dropped a number of jeans sizes, he tried Internet dating again. Romero updated his old profiles and pictures and started sending out messages.

"It was amazing at the time," he says. He got responses from girls he never thought he would hear back from. "I was like, 'Holy crap! This is so different.' It felt like a whole other world had opened up."

Now, Romero spends many nights on dates with his new girlfriend, Kate Rowe. They met on OkCupid.com after he sent her a message. He looked "smoldering and broody" in his profile picture, Rowe says, "and I was like, 'Why not?' "

Their third date was on Romero's 30th birthday, and he decided to tell Rowe about his weight loss, which he thought could be "a potential deal-breaker."

"I don't want to like this girl any more than I already do without having her know," he remembers thinking. "I said, 'I have to tell you this thing. Please don't judge me.' "

Romero knew the risk he was taking. He thought, "What if she doesn't want to be anywhere near me?" Instead of being repulsed, though, Rowe says she was inspired by his hard work and commitment to good health.

If she had seen Romero's old profile back when he was bigger, she probably would not have responded, she says. But now he is into rock climbing and being active, and they have things in common.

For Carlos, there are still physical and psychological hurdles to being in love. It's difficult for him to be intimate. He says shyly, "She's seen everything." And when he looks in the mirror, he still sees a 400-pound man. His mind hasn't quite caught up to his body.