Listen · 5:21 5:21
Answering Your Questions About Ebola Treatments And Vaccines 5:21 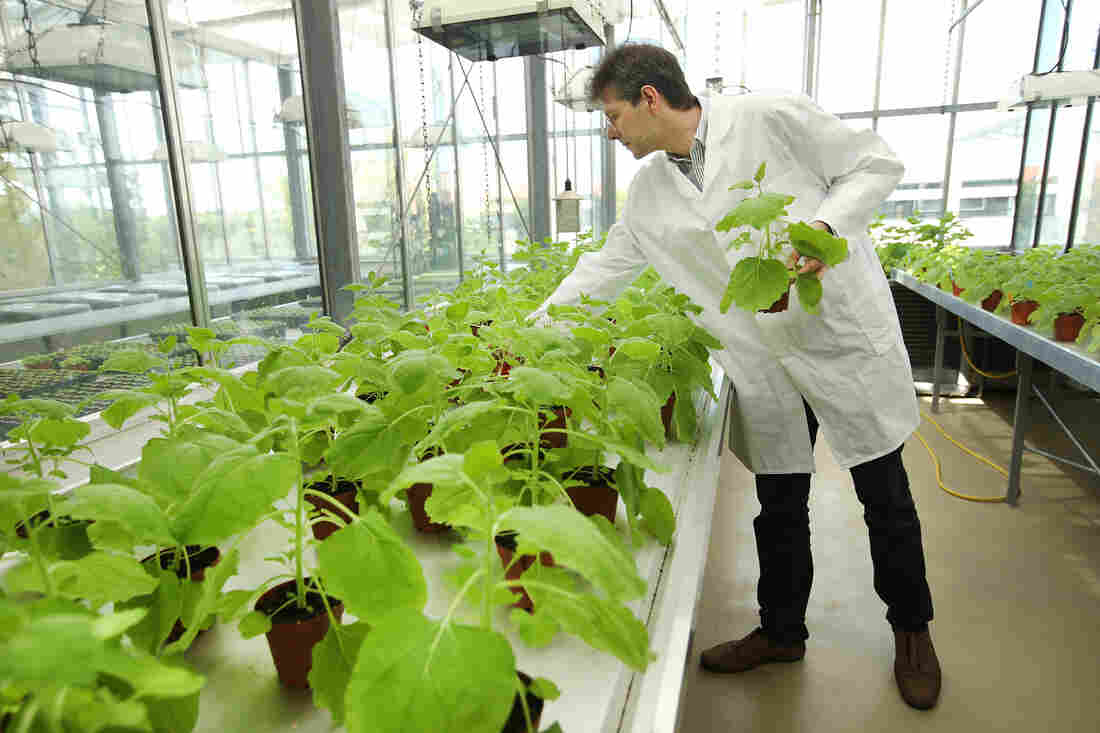 Icon Genetics' Dr. Frank Thieme selects samples of Nicotiana benthamiana, a relative of tobacco, growing in a company greenhouse in Halle, Germany. The company uses the plants to produce antibodies that could be helpful for increasing supplies of ZMapp. Sean Gallup/Getty Images hide caption 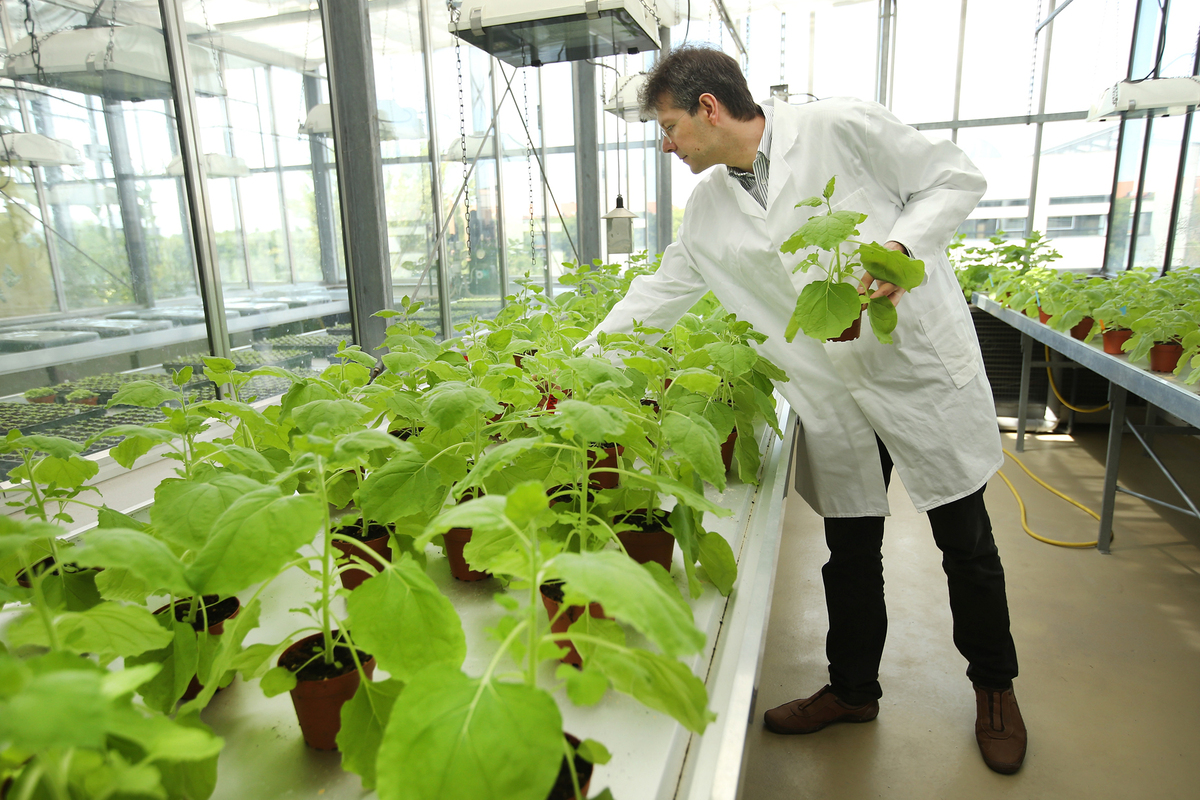 Icon Genetics' Dr. Frank Thieme selects samples of Nicotiana benthamiana, a relative of tobacco, growing in a company greenhouse in Halle, Germany. The company uses the plants to produce antibodies that could be helpful for increasing supplies of ZMapp.

This week, All Things Considered asked listeners to send in their questions about Ebola treatment, drugs and vaccines. Here's a lightly edited summary of the conversation about the results, with questions posed by host Melissa Block and answers from NPR Science Correspondent Richard Harris.

Andrea Asuaje of Palm Beach Gardens, Fla. asks, how exactly are Ebola patients treated for the disease, aside from isolation?

The most effective treatment available now is simply to treat the symptoms. This is called supportive care. It means giving patients intravenous fluids and salts and minerals they lose as a result of being so sick. They may also get oxygen and antibiotics, if they have a bacterial infection. As for drugs to knock out the Ebola virus itself – there is nothing proven on the shelves right now

Nothing proven, but what about experimental drugs?

There are several, and they fall into three categories. First, there are antibodies that boost the immune system. And ZMapp is the prime example. Second, there are antiviral drugs that work against HIV or other viruses. For example, Jason Beaubien reports that one doctor in Africa is trying the HIV drug lamivudine in his patients. And third, there are experimental drugs that bind to the Ebola virus' genetic material. These are theoretically appealing, but there's no proof they work, either.

You mentioned ZMapp. We've heard that the supply of that drug has been exhausted. Is that the case?

Only a small quantity of this drug was ever made. The company that developed it, Mapp Biopharmaceutical, says it has distributed all its supplies. But there may be a few doses stashed away by the World Health Organization or other agencies. They're playing that close to the vest.

Do we know if any of these treatments actually work?

We have no idea. The number of people treated is simply too small. Some people have lived, some have died. There's no saying whether any drug has tipped that balance at all. That said, scientists are trying to ramp up studies in Africa, to try these drugs in many more sick patients. Those tests could begin by the end of November at the earliest, and it may take a while to get results.

Once an effective treatment is found, how quickly might it be scaled up, so it could get to the places that need it the most?

Nothing could be scaled up as quickly as we would want it. And the speed depends on the drug in question. ZMapp is produced in genetically modified tobacco plants, and they take time to grow. There are efforts now to find other ways to produce it. If one of the regular antiviral drugs happens to work, those can be produced fairly quickly. The potential drugs that bind to the virus' RNA will take months to ramp up if they prove to be effective.

Let's turn to another listener question, from Ajay Gupta of Cupertino Calif. He asks whether people lucky enough to be cured of Ebola, have built any immunity to it.

Yes, they have. The Centers for Disease Control and Prevention says they're immune from this strain of Ebola for at least 10 years, possibly longer. That's why those people are being recruited to some of the more dangerous jobs in West Africa.

Following up on that, we've reported that Ebola survivor Kent Brantley donated some of his blood plasma to patients with Ebola - including the NBC cameraman now hospitalized in Nebraska. How effective is this as a treatment?

Again, we don't know, but we can say there's a solid theoretical underpinning for that — in fact this technique was widely used before antibiotics were available. If you've ever had a gamma-globulin shot, you've essentially had this kind of serum treatment. There is a bit of experience with Ebola and that has produced hopeful results, but if the treatment works, it would be a logistical nightmare to produce this serum in any volume, particularly in West Africa where the health care system today is barely functional.

Listener Daniel Johnson, Jr. of Cincinnati asks: "Can you update us on progress that's been made to get a vaccine developed?" He's asking about a preventive vaccine, not a treatment for people already infected.

One vaccine is already being tested for safety in a small number of volunteers, here in the United States and in West Africa. That's produced by GlaxoSmithKline. A second vaccine from a small biotech company called NewLink Genetics is under development, but company isn't saying whether it's actually being tested in people yet; and Johnson and Johnson is working on a third potential vaccine, but it won't be ready for testing until sometime next spring earliest.

There have been about two dozen outbreaks of Ebola since 1976. Why don't we have a vaccine already?

Every outbreak before this one was quickly brought under control simply by isolating sick people to stop the spread of Ebola. That said, the U.S. government has been funding both vaccine and drug studies for more than a decade in case Ebola becomes a biological weapon. That research is now being accelerated in response to the humanitarian crisis in West Africa.